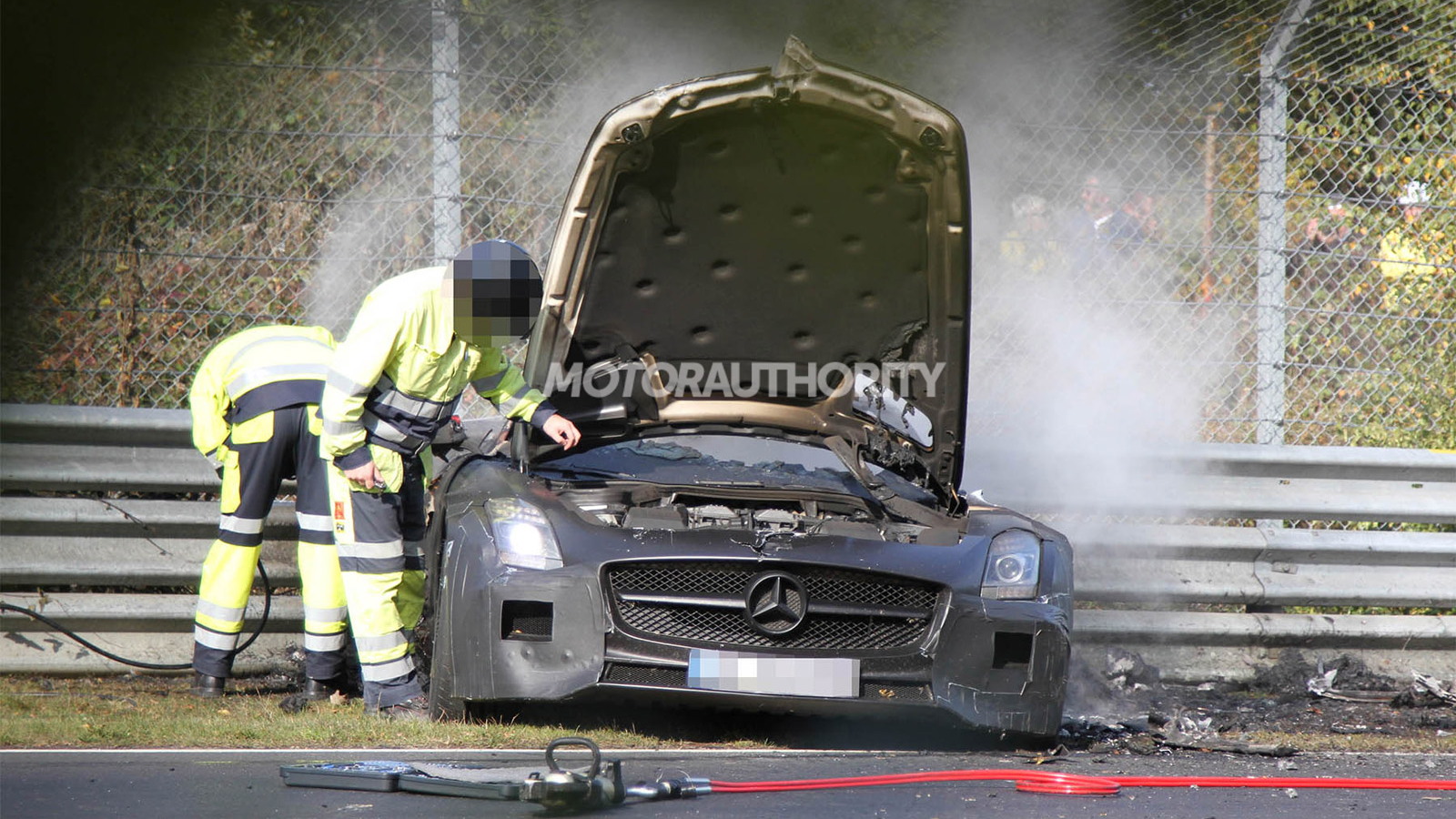 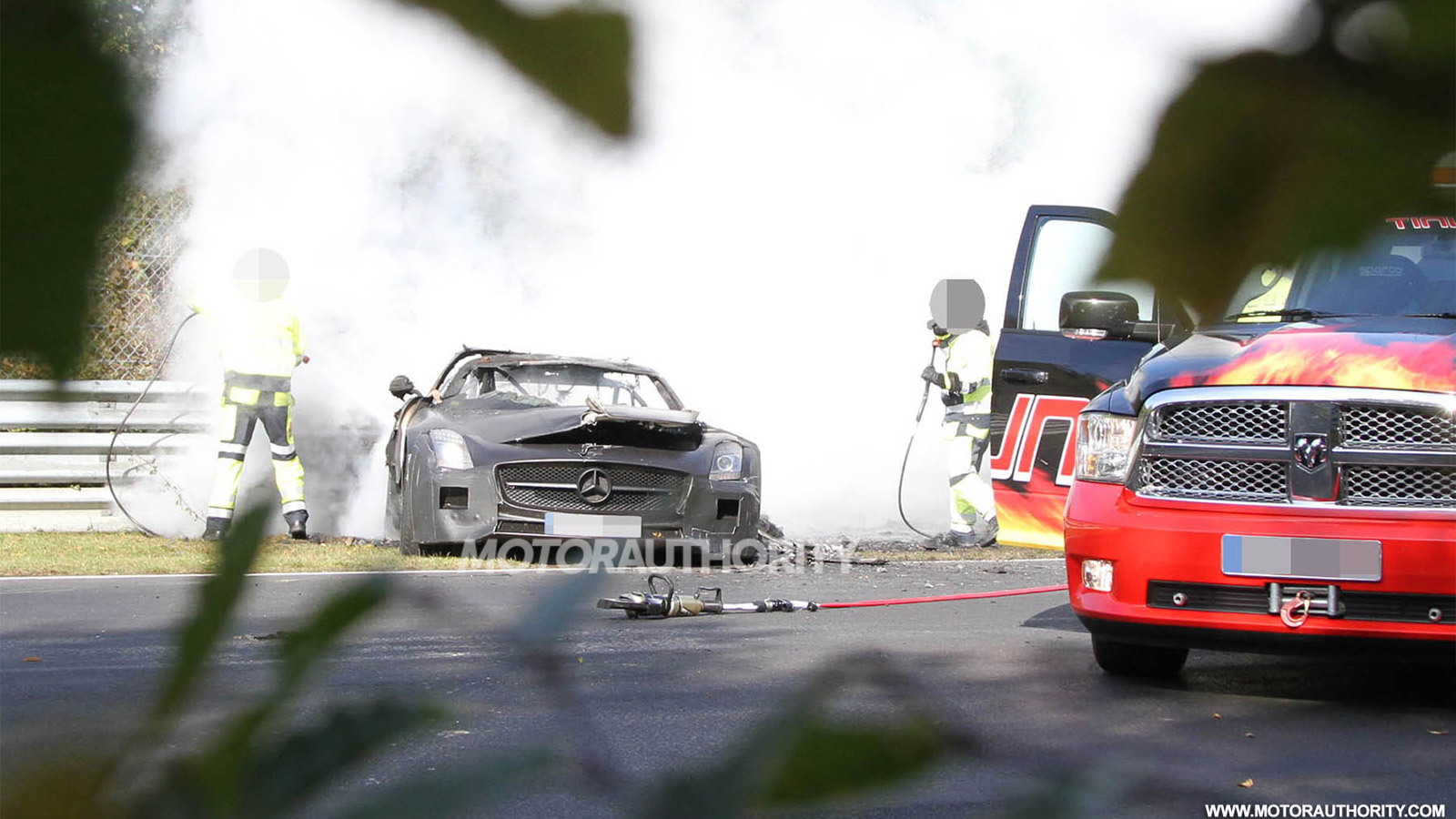 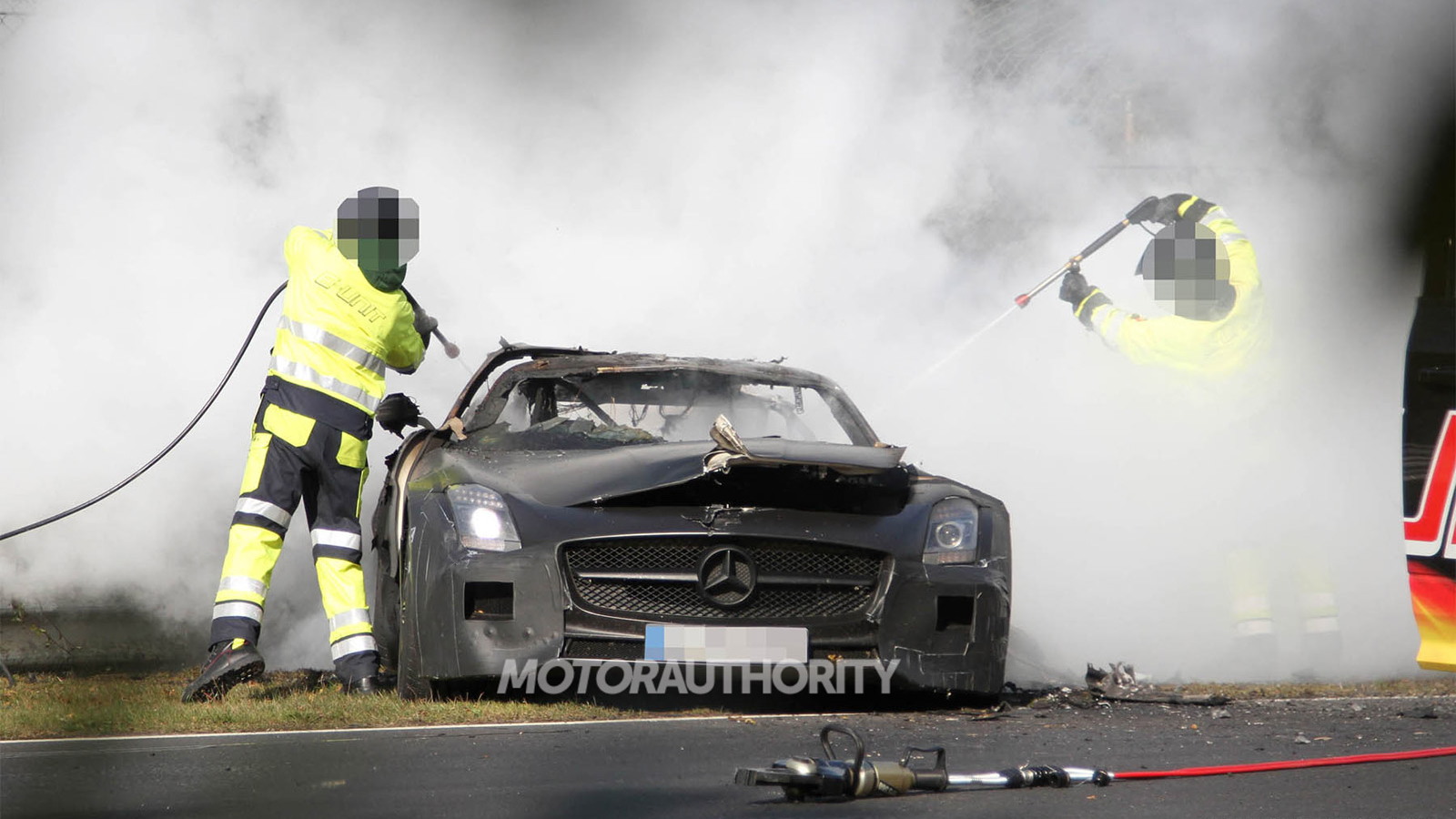 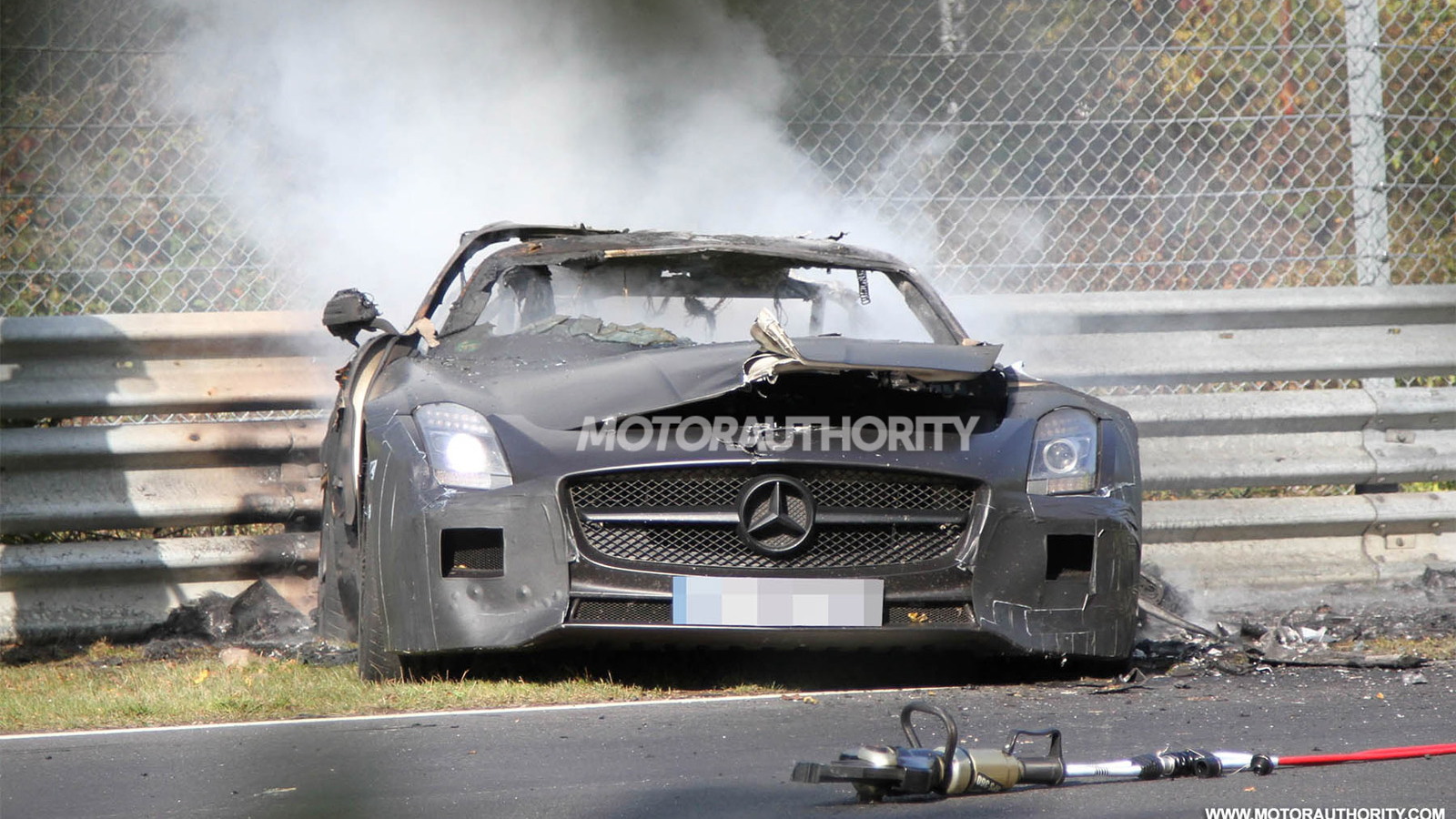 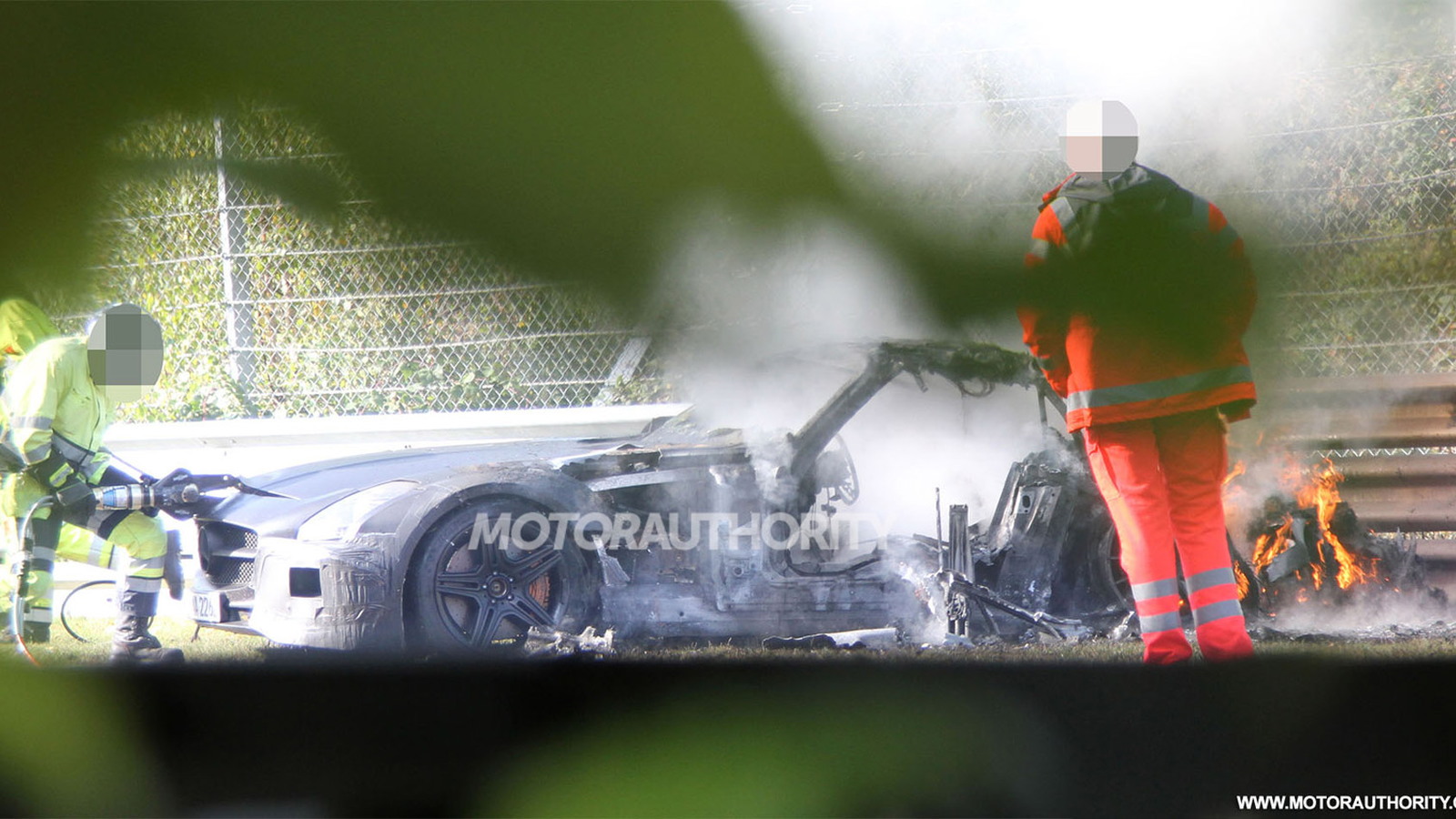 12
photos
UPDATE: The 2014 Mercedes-Benz SLS AMG Black Series has been revealed. Click here for all the details.

We’ve been bringing you spy shots of prototypes for the upcoming SLS AMG Black Series model from Mercedes-Benz for close to a year now, with one of the prototypes most recently being spotted conducting some high-speed tests on Germany’s Nürburgring race track. Unfortunately, it appears that the prototype has now crashed on the ‘Ring and caught fire.

The good news is that the driver and passenger managed to walk away from the crash, long before the flames took over the wreckage.

The crash took place at the Döttinger Höhe section of the Nürburgring, a long straight that stretches close to 1.5 miles and where it’s common for AMG models to clock speeds of close to 186 mph.

With the fire having destroyed most of the car, we can see that AMG engineers are sticking with the SLS AMG’s aluminum structure rather than adopting the carbon fiber monocoque of the SLS AMG Electric Drive. Not much else can be gathered from these latest shots, but previous spy shots have revealed pumped fenders, an integrated diffuser and plenty of carbon fiber.

It’s expected that the new SLS AMG Black Series will have a more powerful engine than the 583-horsepower SLS AMG GT. Combined with this should be a lighter overall curb weight and retuned suspension, guaranteeing the Black Series will be the most capable model in the Mercedes-Benz fleet.

We don't know yet exactly when the SLS AMG Black Series will enter production, but we will likely have to wait until sometime in 2013 for the official unveiling, which means the car is likely to arrive in showrooms as a 2014 model.

While you wait for its arrival, click here to watch a spy video of an earlier prototype, also on the Nürburgring.

Interestingly, this isn't the only AMG prototype we've seen crash on the Nürburgring recently. Last month a prototype for the upcoming A45 AMG also crashed.