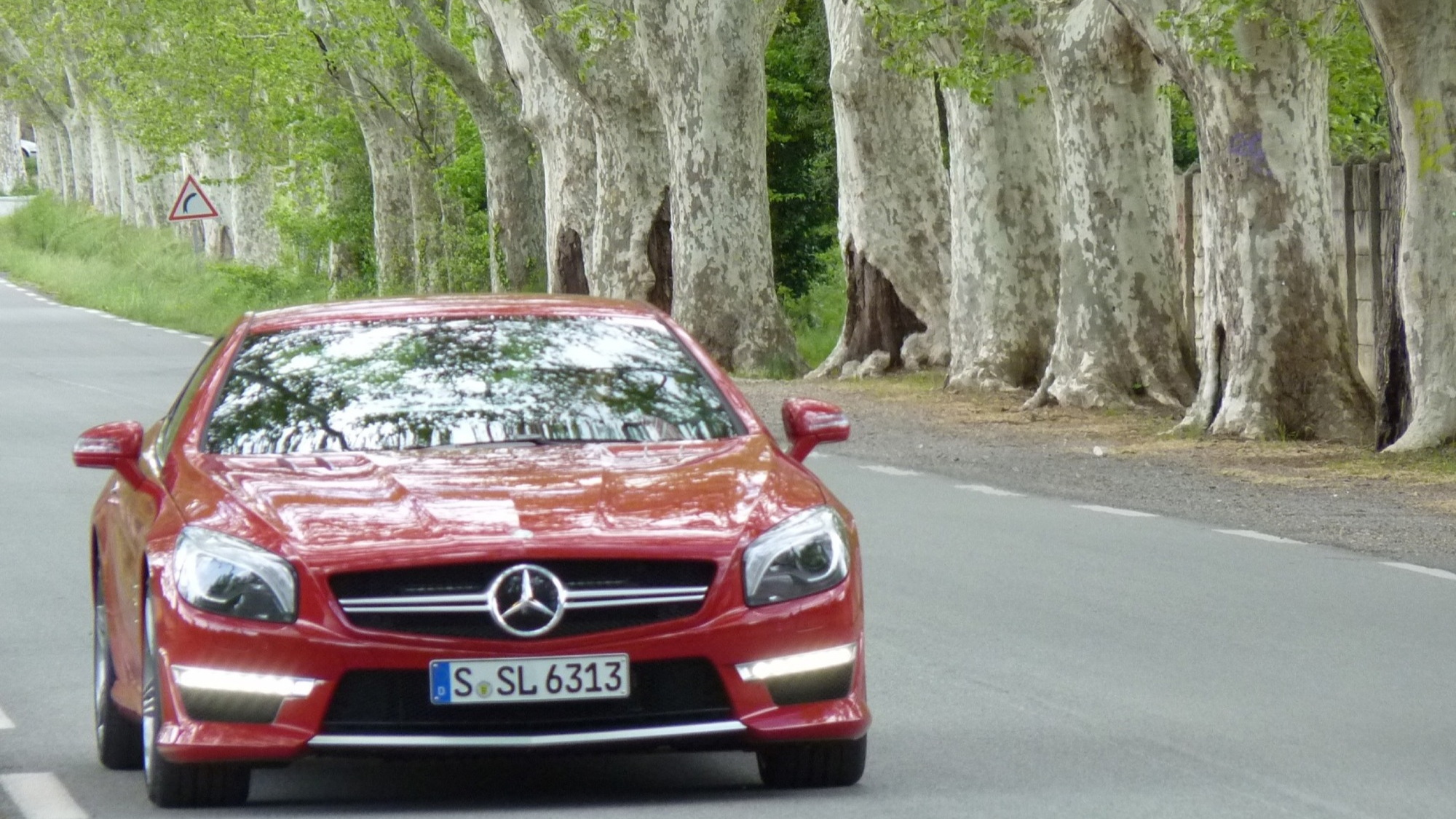 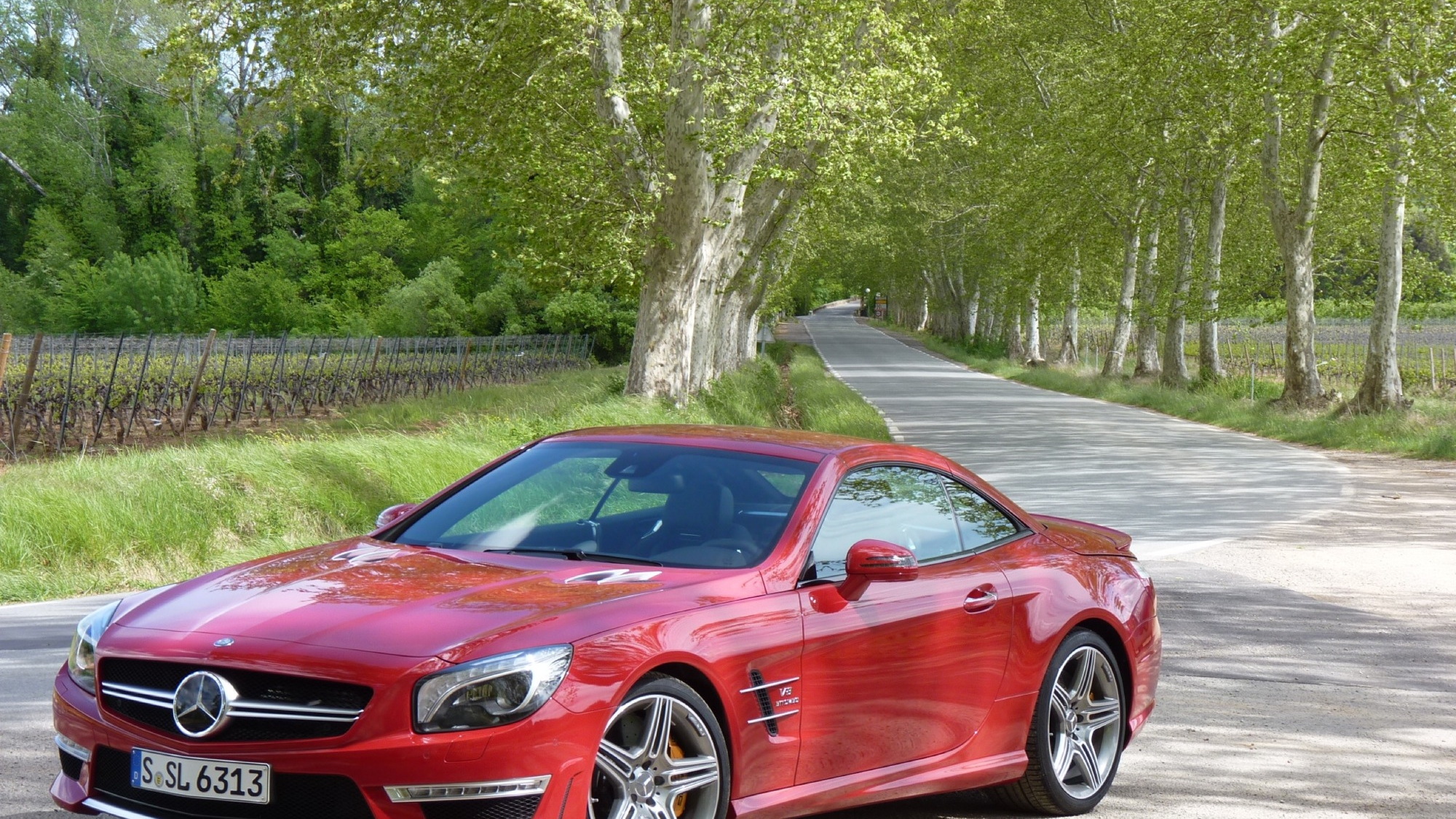 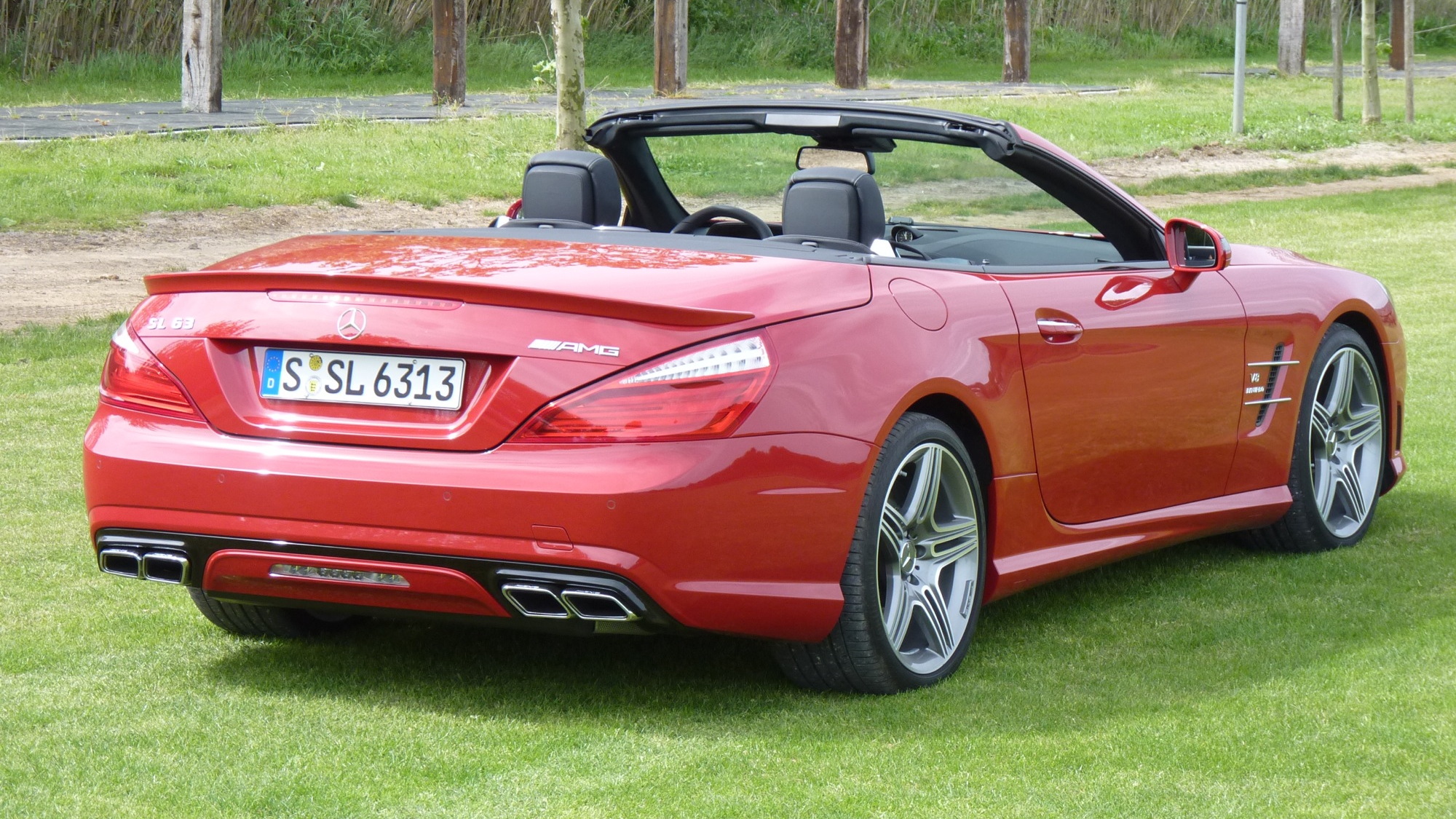 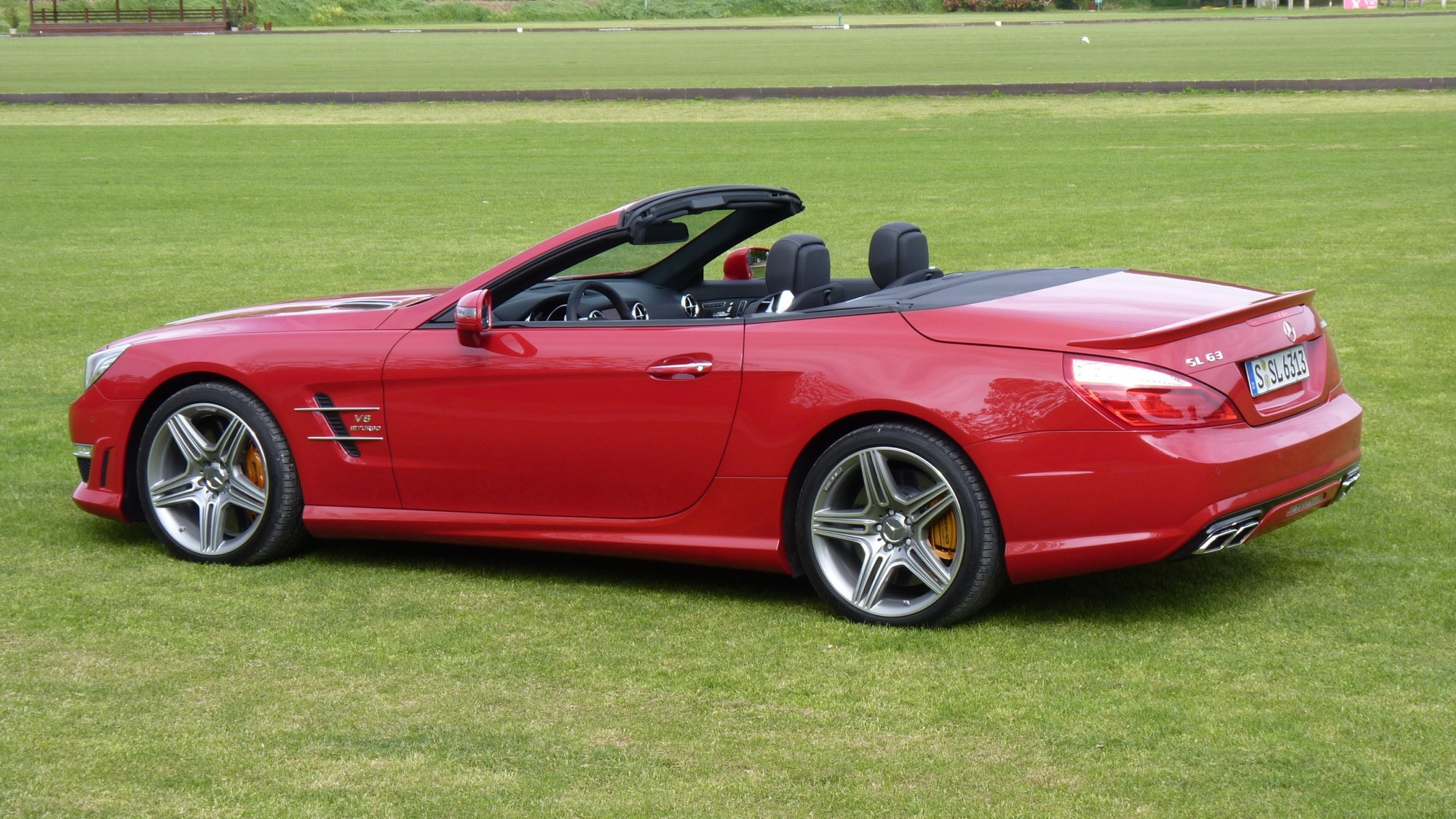 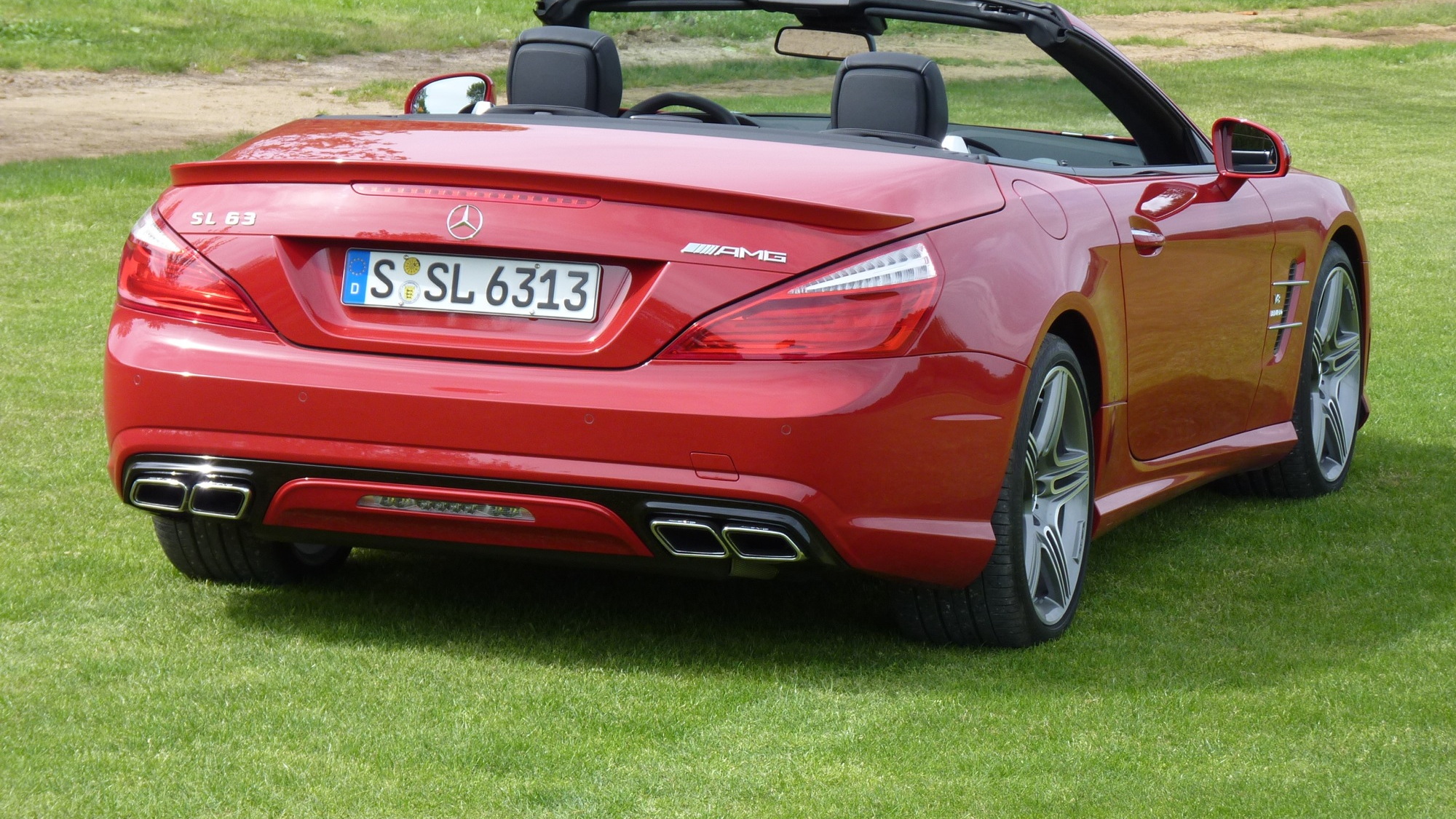 51
photos
To understand a car—okay, especially one that’s perhaps a little removed from our own fiscal reality—it helps to peer into the buyers’ mindset for a stint, and to go where they might go. And when the place happens to be the French Riviera, and the car is the 2013 Mercedes-Benz SL 63 AMG, we’re willing to subscribe to such hardship and masquerade.

The Cote d’Azur region of France, in part ranging from Saint Tropez to Nice and including Cannes, is of course one of the world’s top playgrounds for the rich and famous; it’s also where the SL 63 AMG fits right into the scene. For everyday driving, or cruising along the beach communities, the SL 63 AMG won’t force you or your passenger to make any sacrifice in comfort; top-down motoring just doesn’t get more luxurious than this, and the standard Comfort settings that this car’s many active controls default to a nice, gentle calibration for the throttle and transmission that’s more in line with traditional Mercedes-Benz powertrains. Factor in the excellent Airscarf system and heated-and-ventilated seats—plus top-notch wind buffeting—and this is a car that we could especially enjoy with the combination of bright sun and the somewhat chilly spring air.

More sports-car than the SL 550

While the SL 63 makes the right statement along the beaches, it started to sing to the senses as soon as we pulled out from the Polo Club Saint Tropez and took to the curvy backroads and smaller highways leading up away from the coastal areas toward the French Alps. Compared to the SL models of more than a decade ago, the current SL feels more sports-car-like, with its brawny 530-hp, twin-turbo AMG-built V-8 (instead of the SL 550's 429-hp 4.6-liter) and reworked seven-speed automatic transmission—with AMG replacing the torque converter with a wet clutch pack and capable of smacking from one gear to another in as little as a tenth of a second.

But in a nod to the types of people who will gravitate to the SL, the SL 63 AMG defaults to Comfort (C) modes. On the powertrain side (the dial), that smoothes the engine controls, makes the throttle response nice and seemingly linear, and gives upshifts a creamy smoothness. Click that powertrain controller on the center console one notch over to the Sport (S) mode, and it feels much more eager, with quicker, sharper (DSG-like) shifts and a more progressive throttle. Sport plus (S+) makes it sharper yet—like a racing box—and taps into the full potential of the transmission, and includes a different regimen for the stability control system.

According to AMG head of vehicle development Tobias Moers, many AMG customers like to run their vehicles in the more aggressive Sport powertrain mode, but with a Comfort chassis setting, so the SL 63 offers these setting separately, and easy to toggle through with physical switches. We also ran much of our drive route this way, in Comfort chassis mode but with Sport powertrain setting, as Sport mode tended to bring out more road irregularities, while offering a relatively satisfying dynamic experience on sweeping country roads—except perhaps for the steering. Even in Sport mode, the steering tended to be on the light side. It trades off the heft and long ratio of former M-B units for a rather quick (constant) ratio, but there isn't much of any feedback in any case. On the other hand, Southern France has some of the narrowest roads in Europe and we appreciated the precision the steering allowed in lane placement.

Only when we got to some tight switchbacks did we truly recognize the need for Sport mode on the road. M-B's Active Body Control (ABC) system, which is optional in the SL550, is included here in the SL 63 AMG, most of the time, it expertly soaks up uneven road surfaces and saves occupants from the pitchiness, also keeping the cabin flat in gentle to moderate driving on curvy country roads and making the SL in general feel lighter and more tossable than it is. But push those limits a bit on some of the tightest corners and ABC sometimes adjusts the attitude of the car a little too overtly, mid-corner; for instance on very low-speed hairpins in Comfort mode, we noticed that just before apex ABC would suddenly increase the roll moment at the rear (pushing the car closer to understeer)—with the effect from the steering wheel feeling as if the ratio suddenly tightened; it’s a bit disconcerting, and we rapidly learned that it’s up to the driver to switch to Sport (or Sport+)—where this effect isn’t as pronounced—when the roads turn very curvy. Versus the SL 550, the geometry of the rear axle has been changed just a bit to accommodate the AMG models’ sharper, higher torque delivery.

But all these details don't detract too much out on curvy back roads. With the systems set in Sport mode and using the paddle-shifters, it's great fun to dab into the power for as long as you dare, listening to the thunderous, howling-and-pulsating engine note—which seems to bark a little bit extra at each shift—before you need to brake down to sanity once again. Just as the new sixth-generation SL, the SL 63 AMG will feel lighter than any previous-generation SL owner might expect; it includes an all-new aluminum body that saves about 275 pounds altogether next to the previous version; the design also includes an aluminum frame as well as aluminum body panels.

Included in all SL AMG models is a Race Start feature that allows the most quick, aggressive launch possible, with some wheel slip. There's a pretty involved routine you'll have to go through to tap into the system, and for good reason. Also on offer in the SL 63 is an AMG Performance Media system that includes a screen with extra gauges, a lap timer, and other performance information.

And if you are of that mindset, you'll want to go for the $9,000 Performance Package, which increases peak turbo boost from 14.2 psi up to 18.5 psi—boosting power to 557 hp and torque to 664 lb-ft, although the torque peak is a slightly higher 2,250 rpm (versus 2,000 rpm otherwise). Top speed for the SL 63 is 155 mph, although those equipped with the Performance Package get a boost to 186 mph. In both cases it's electronically limited. A Torque Vectoring Brake system comes with the SL63 and functions essentially as an electronic limited-slip differential, but the Performance Package—identified from afar by its bright red brake calipers—includes a real one.

Acceleration is scorching—even compared to the SL 550. While the SL 550 gets to 60 mph in just 4.5 seconds (from 5.4 seconds in the previous generation), the SL 63 AMG can do it in just 3.9 seconds with the Performance Package—and those are AMG's somewhat conservative numbers.

All this performance talk aside, cruising and making the scene is the majority of AMG SL ownership to some. And inside, the current SL sheds some of the tackier details of the previous SL for a mix of classy curvaceousness; while the trims and upholsteries are up to the standards of any of other high-end Mercedes-Benz and AMG models, the round vents and hooded instrument cluster remind us more of the SL models of the 1970s and ‘80s. And the analog IWC Ingenieur clock that’s top and center on the dash remains one of the most distinctive timepieces in a vehicle.

The S-Class of sporty cars, indeed

Company officials have called the SL the S Class of sporty cars, and that isn't far off if you consider the SL63 by its feature list. You'd be hard-pressed to find a typical luxury feature that isn't standard here—harman/kardon surround sound, HD Radio, satellite radio, Bluetooth, hard-drive navigation with live traffic updates, a heated windshield, power folding side mirrors,

Mercedes-Benz’s Attention Assist, which studies steering inputs and detects driver fatigue, is also included, as is Pre-Safe, a pop-up roll-bar system, and bi-xenon headlamps—in addition to eight airbags. Other active-safety options include adaptive cruise control, Active Blind Spot Assist, and Active Lane Keeping Assist. Active curve illumination is also included, allowing the headlights to swivel 15 degrees to either side, helping to see around tight, dark corners. And an Adaptive Highbeam Assist system can infinitely vary the beam focus from 220 feet to 1,000 feet.

As with the SL 550, the SL 63 comes with Eco Stop/Start, which smartly shuts off the engine at stoplights and restarts it the moment you lift off the brake. We found it to be one of the least obtrusive stop/start systems yet, with very little shudder noticeable from the cabin, although setting the powertrain controls to S or S+ disables the feature. Although EPA figures aren't out for the SL 63 yet, AMG says that the new powertrain is up to 30 percent more fuel-efficient than the previous models.

From the inside, the SL 63 AMG really does have all the comfort of the S Class, with long, nicely contoured seats with extendable thigh bolsters plus massage and ventilation functions, and in Coupe mode, with the tight-fitting insulated hardtop top up and in place, it's hard to believe that this is a convertible. Just as with the other new SL models, there’s a fully retracting, electrically operated hardtop that can be opened or closed in about 20 seconds. Although the system follows a Transformers-like series of steps to unfold, it’s all smooth and well-damped, with none of the previous system’s judders. And there’s a power-operated windscreen that greatly reduces turbulence at city-cruising speeds.

We didn’t have to drive long at all before one of the SL 63 AMG’s almost-direct rivals—a late-model 997-era Porsche 911 Turbo—came barreling along, beside us for a short time on a wider section of road. With the top down, we arguably had the better-sounding engine from outside the car—and far superior comfort—while being nearly as quick. But between these two models, it served as a reminder that while the 911 remains closer to a pure sports-car (or supercar) formula, the SL 63 is a high-powered grand-touring ultra-luxury roadster—with more of a priority placed on comfort and cabin appointments.

While these two vehicles both vie for the rich and influential who summer on the Riviera—along with the likes of the Jaguar XKR, Maserati GranTurismo, and base Aston Martin DB9—they’re appealing in very different ways. In its proper context, the SL 63 AMG makes about as much sense as a rather large $200,000 luxury two-seat roadster can. That's right; while the SL63 starts at $146,695, options can approach that. Add the major option packages plus carbon-ceramic brakes (orange calipers), Bang & Olufsen sound, and the electrochromic roof, and you're at $184,470; and that's before trim and wheel extras.

Likewise, it begs a comparison with the $189,600 SLS AMG Coupe or $196,100 SLS AMG Roadster. While the gull-wing SLS Coupe is going to turn even more heads, it's also a little more Viper-like, a lot less practical.

And that's what might sum up the SL 63's appeal the best; put back into the context of the French Riviera, or Rodeo Drive, it won't always turn the heads of testosterone-fueled motorheads, but it's a high-priced luxury good in all the right ways that those who can afford it want—versatile and comfortable enough for daily driving (it does speed bumps; it parks easily), yet providing a more exclusive experience that discerning drivers—and those who want to go faster—will appreciate.