Proof you can still find some of the rarest of rare automobiles rotting away in a damp garage or barn somewhere is this original 1957 Mercedes-Benz 300SL ‘gullwing’ coupe found during an estate sale in the UK recently.

The original 300SL, both in its coupe and roadster bodystyles, is one of the most sought after models by collectors today, with some examples fetching more than a million dollars though they typically sell for between $500k and $700,000k.

It’s not clear why the family that owned this particular car, a fully unrestored 1957 example, chose to leave it abandoned up in the rafters of their garage, but it may be due to some mechanical problems the owner chose not to repair.

The engine, originally a 3.0-liter straight-six with 215 horsepower on tap, was found in pieces away from the car, according to BarnFinds. In its prime, this engine, accompanied with a four-speed manual transmission, would see the 300SL reach a top speed of 135 mph.

While 300SLs can and often do fetch top dollar at auction, restoring this example for sale may easily cost almost as much as it’s likely to sell for. Nevertheless, we’re sure there are plenty of collectors out there that would love to get their hands on this car despite the condition it is in.

Pictured below is an example of another 300SL to provide an idea of what the car would have looked like in its heyday. In the foreground is the latest-generation Mercedes-Benz SLS AMG, the spiritual successor to the original 300SL gullwing coupe. 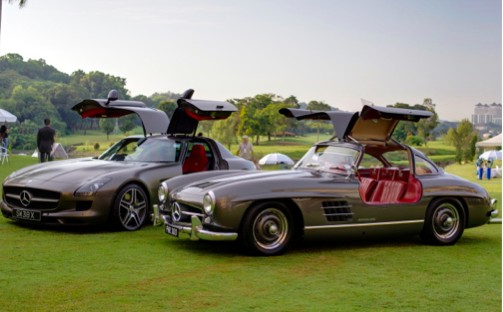