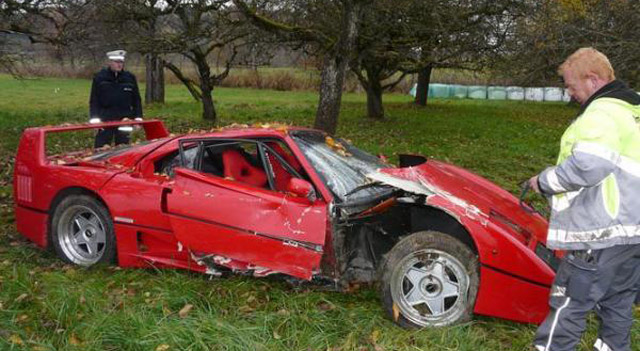 This has been a pretty bad year for the legendary Ferrari F40 supercar. Just last August one of the cars crashed in Houston, Texas and now a second example has crashed in the south of Germany.

To make matters worse, the latest example is believed to have had just 6,200 miles on its odometer.

Unlike the Houston crash, the F40 involved this time was being driven by its owner at the time of the crash, an 80-year old businessman from Stuttgart.

According to a report from Sud Kurier, which was first picked up by GT Spirit, the driver lost control of the supercar while driving on a road not far from his home and subsequently crashed into a nearby tree.

Local investigators claim the damage to the car could be as high as $340,000, which is almost as much as the car was originally worth, but just looking at the gruesome image above one has to wonder if it will even be repairable.

Ferrari built a little over 1,300 F40 supercars between 1987 and 1989, though their numbers are starting to dwindle and finding one up for sale is simply getting harder and harder as the years roll on. For a detailed look at the car’s history, click here for our previous video post.