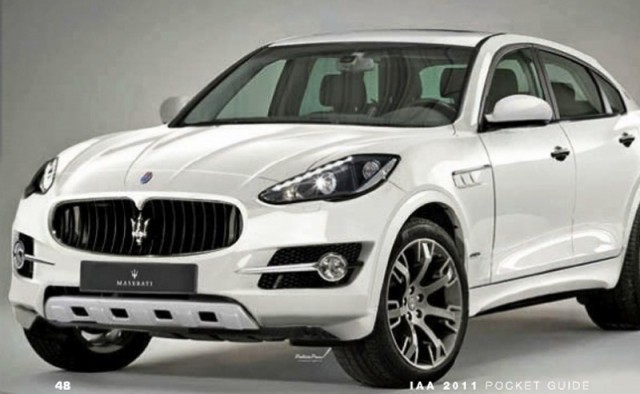 We already knew that a Maserati SUV concept based around the award-winning 2011 Jeep Grand Cherokee platform would be unveiled at the 2011 Frankfurt Auto Show on September 13, but now, just days out from the event, an alleged image of the luxury off-road concept has leaked onto the Web.

Appearing in an online pocket guidebook for the show created by Automotive News Europe, this image came with the description that it previews a new SUV model due for launch in 2013 and that it will likely come powered by the same 4.7-liter V-8 found in the rest of Maserati’s lineup.

The vertical slat front grille, fender vents, and angular headlights are all features seen on Maserati’s latest models, but what’s most interesting is the BMW X6-like coupe styling for the profile.

Despite the taller ride height and metal skid plates, don’t for a minute think Maserati's upcoming SUV will be capable of boulder climbing or towing a 5,000 pound trailer. The luxury ride will be tuned more for speed than off-road duty, thus a sportier suspension setup than its Jeep counterpart will be a given.

Production is expected to take place within the next 12 to 18 months at Chrysler’s Jefferson North assembly plant in Detroit. And of course, being a Maserati, prices won’t be cheap, with initial estimates  putting its sticker around the $80,000 to $100,000 mark.

Stay tuned for official details once the 2011 Frankfurt Auto Show gets underway in just a few days’ time. In the meantime, click here for our complete coverage of the event.