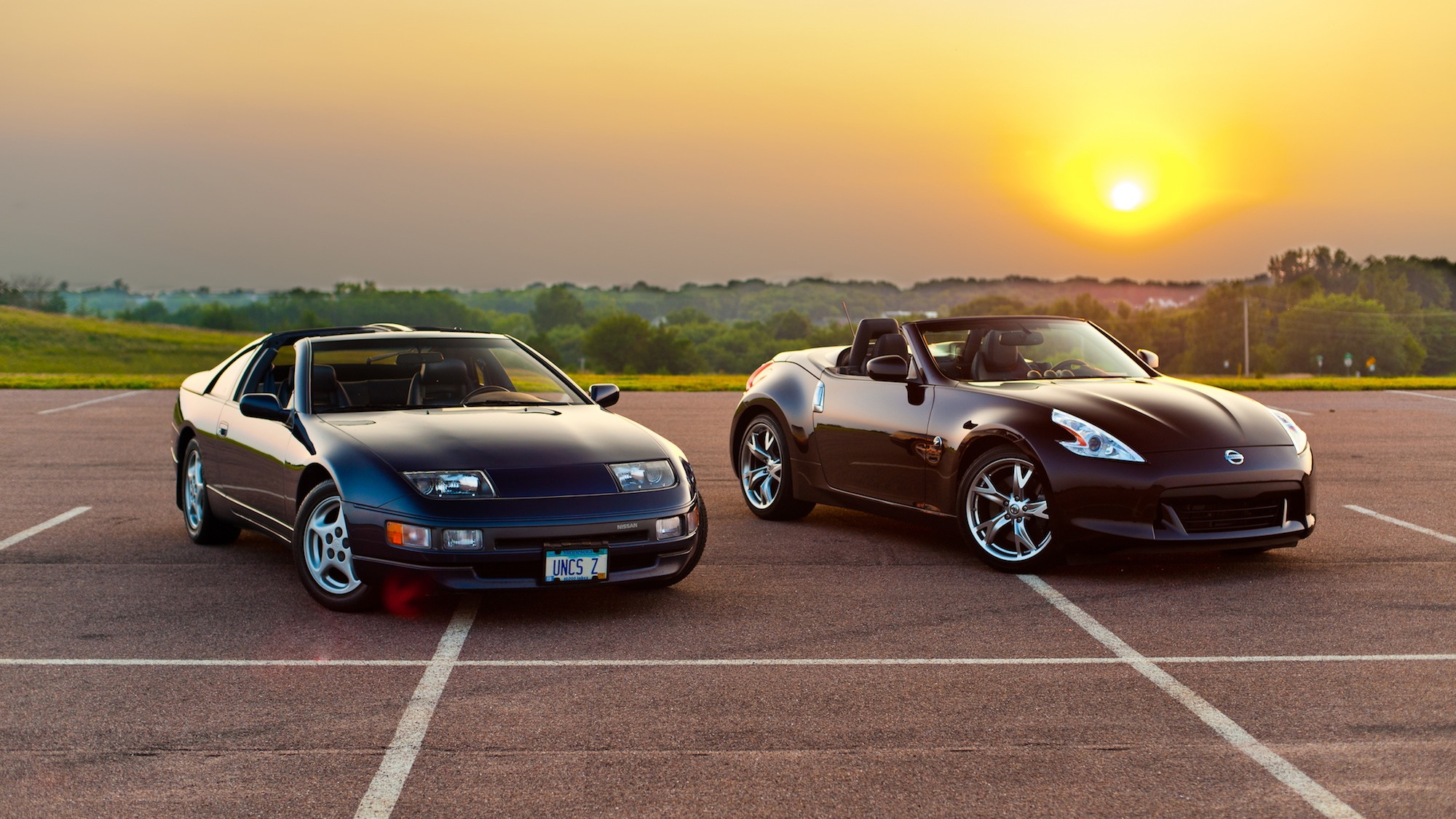 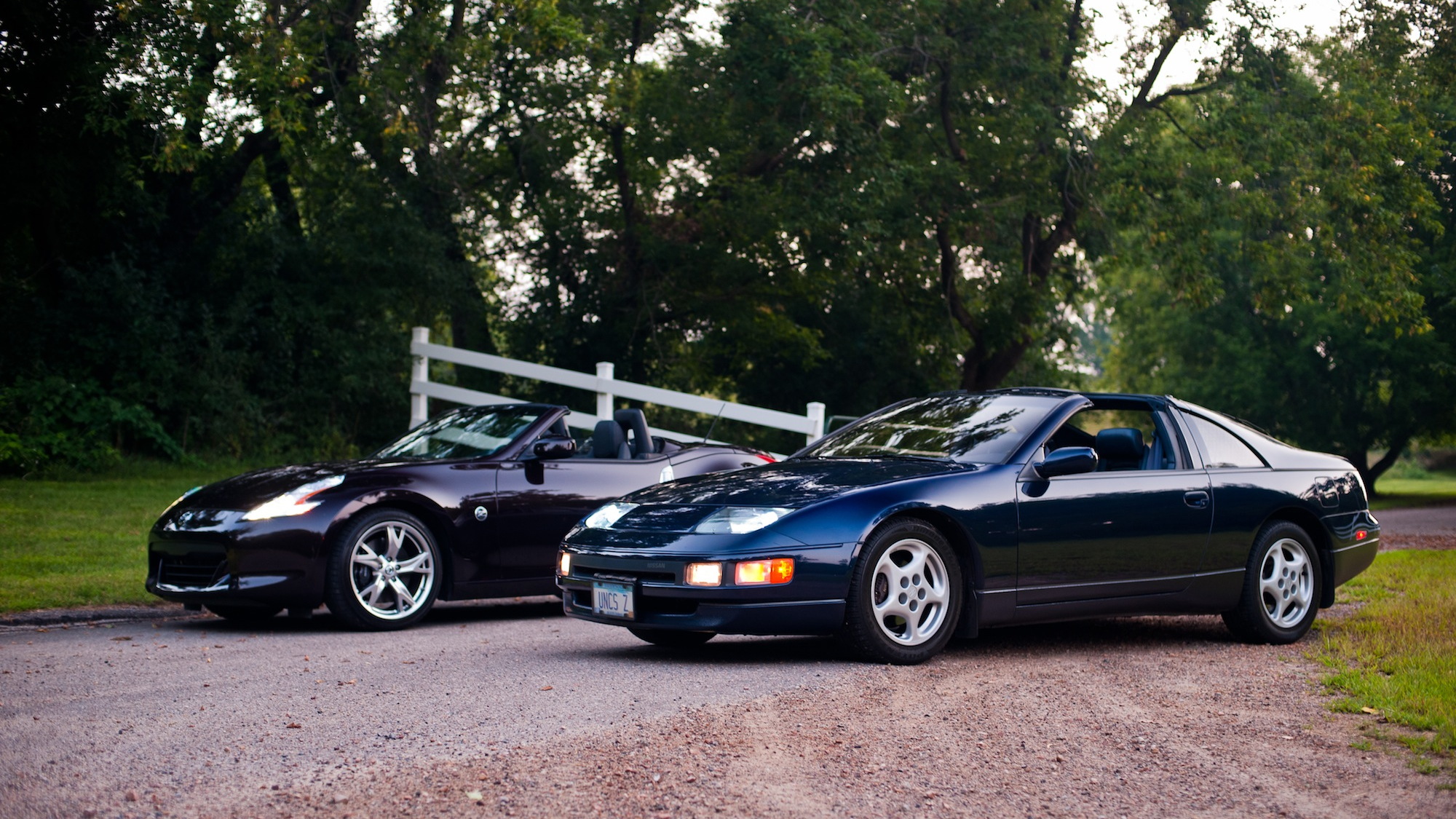 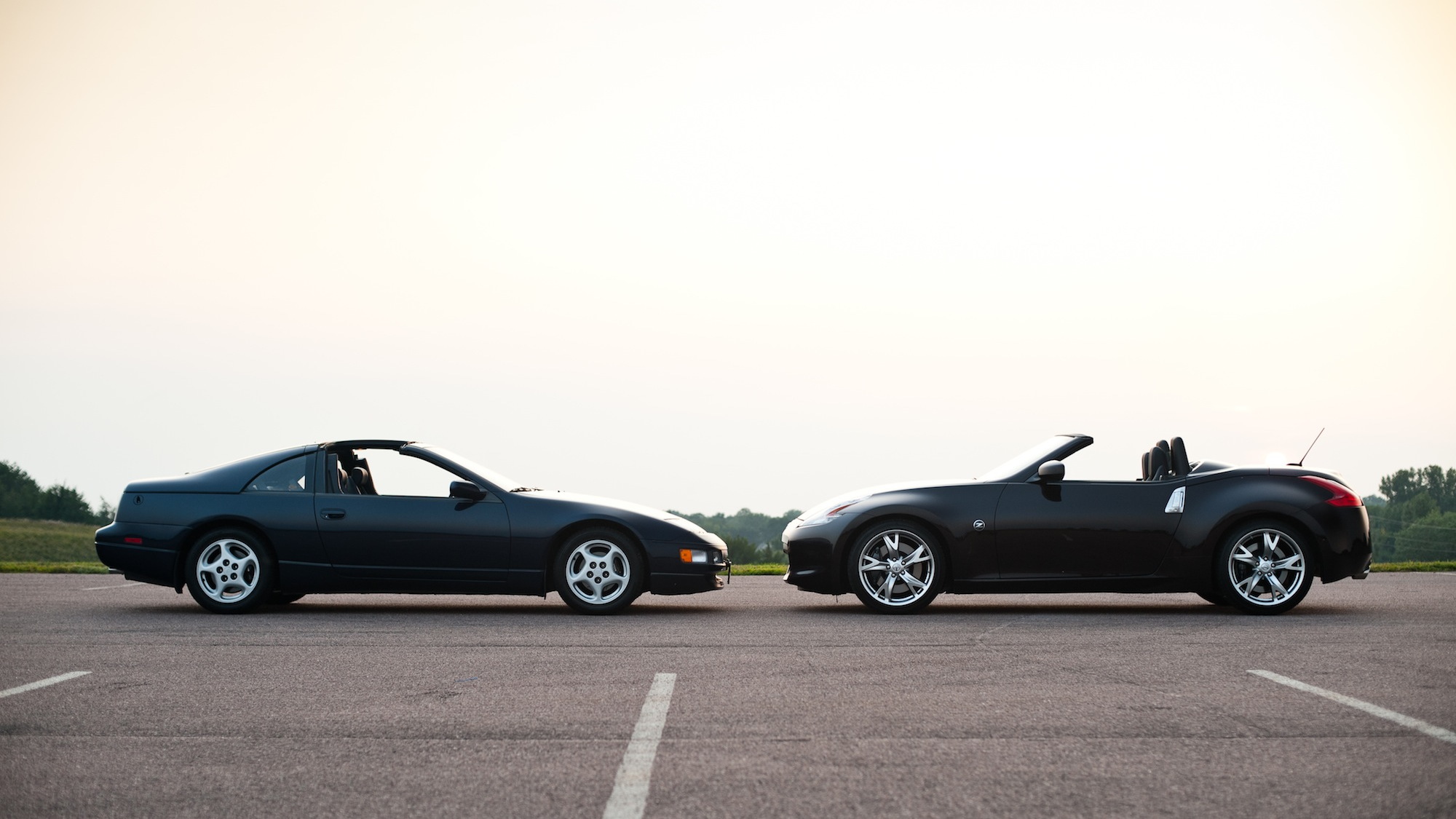 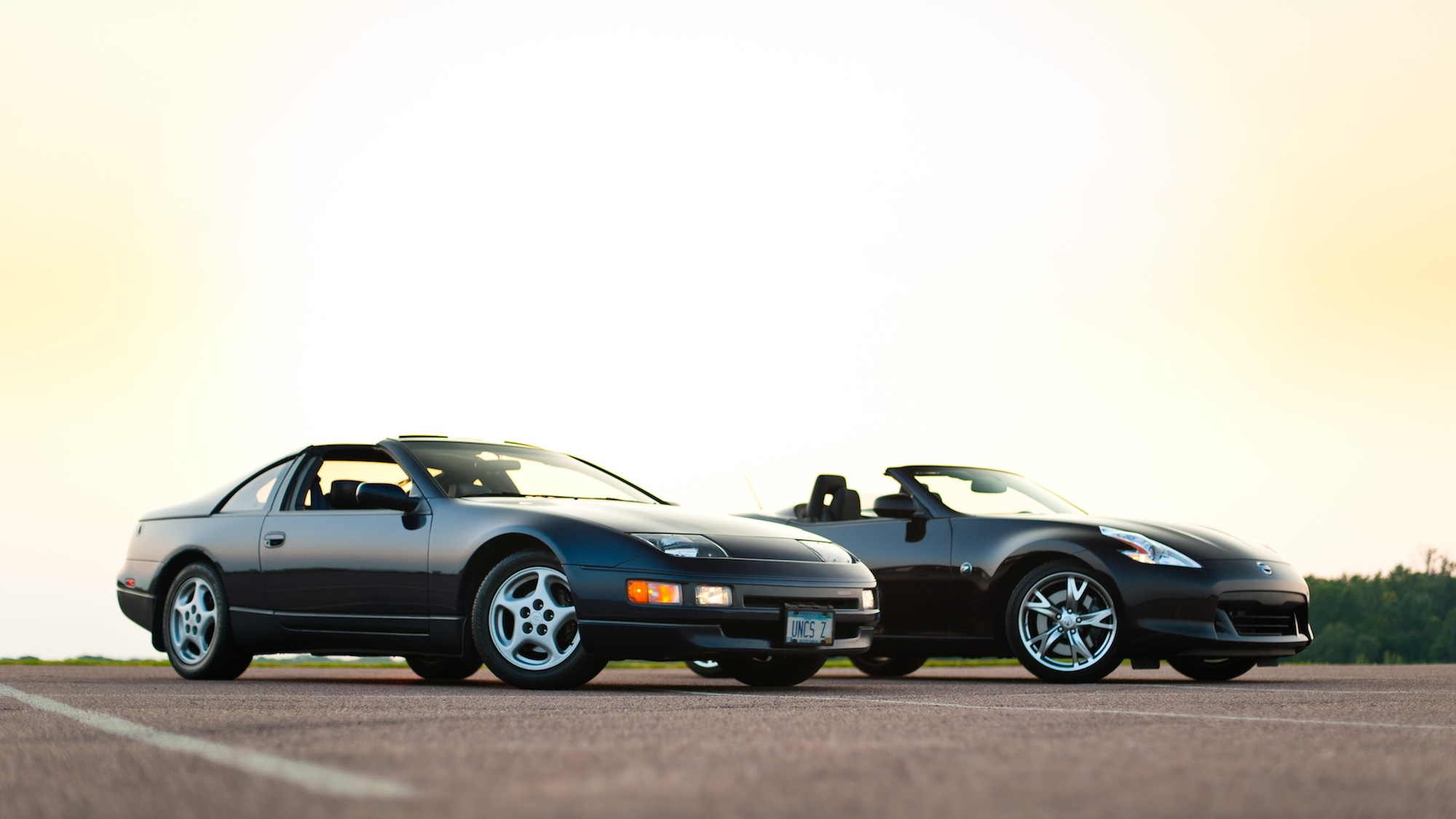 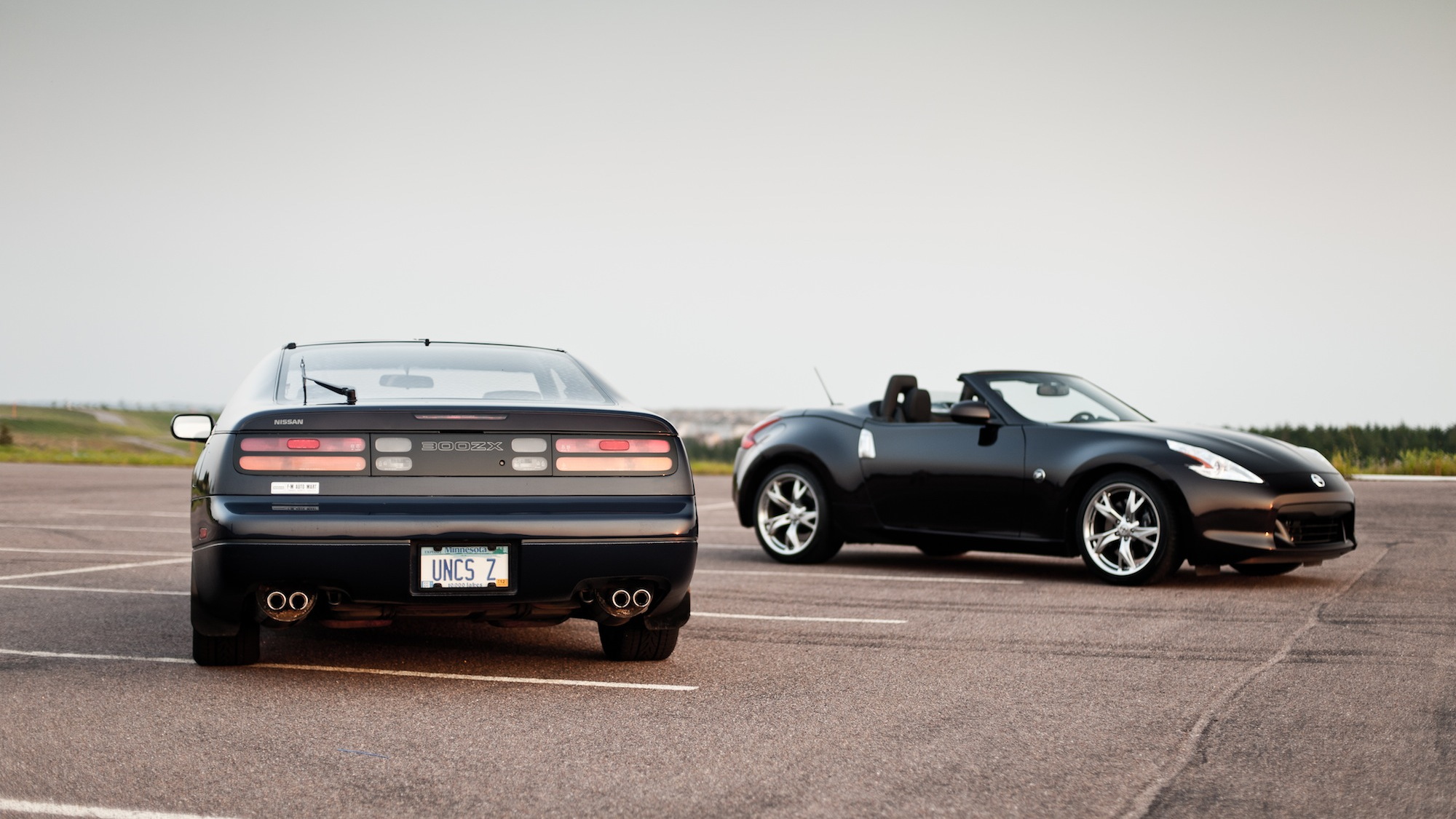 Many things have changed in the car industry over the past 21 years, but one thing remains constant: Nissan produces a sports car bearing the letter Z. Known to some as the Fairlady, and others as simply as The Z, there's no question that Nissan has built a cult-like following for this model.

It's no secret that we are big fans of the Z here at MotorAuthority. Our fearless editor Nelson Ireson owned a 2003 350Z, and I have a 1990 300ZX 2+2. When a 2011 370Z Roadster landed in my driveway for a week, a comparison between the past and present seemed only natural.

Read on for the full analysis.

When it comes to Z design I am a huge fan of the classic lines on the 240Z, but truly love the wide stance of the Z32 300ZX. The curvy 370Z took some getting used to for me, but I've come to like it.

In 1990, the Z32 300ZX was one of the most advanced car designs on the market. It was one of the first production cars to be developed with CAD software which led to many innovations ranging from tight panel gaps to four-wheel steering. The car won multiple awards throughout its 6 years in the marketplace.

The 300ZX has a low, wide, no nonsense stance accentuated by long horizontal taillights and headlights. In contrast, the 370Z is narrower by approximately 2 inches while wearing its curves like Beyoncé on the red carpet. When analyzing the 300ZX design, you get the sense it was purpose-built with coefficient of drag (Cd) numbers in mind rather than pure style, where as the 370Z feels like a mix of style and function wrapped into a curvy package.

Nissan wanted the 370Z to hark back to the 240Z, with a long hood and rearward cabin. The 300ZX differed from this design philosophy with the fluid cabin and jelly-bean like shape. The main similarity in the two designs is the hood proportion. I'd like to think the sculpting on the hood of the 370Z is a nod back to the slight bulge sculpted into the center of the 300ZX hood, but I could just be dreaming.

Inside, the two cars couldn't be more different. The inside of the 300ZX feels special and unique, featuring a mix of tweed, vinyl, and plastic. The dashboard flows away from you and all of the controls are driver centric, with the climate controls, lights, and windshield wiper controls all in pods attached to the sides of the gauge cluster. The interior design of the 300ZX doesn't look dated (to my eye) and could easily pass for an interior in a new sports car.

The 370Z is a stark contrast to that of the 300ZX, with parts bin switch gear that can be found in anything from a new Nissan Murano to an Infiniti G37. The car's center stack isn't unique, making the interior of the newest Z feel anything but special.

I did like the three pod gauges sitting atop the center stack canted towards the driver, a clear nod towards the design of the 240Z. The gauge cluster in the 370Z has a large tachometer front and center with the speedometer pushed to the right. This puts the revs as your main priority when glancing at your gauges--never a bad thing.

One of my gripes with the gauge cluster deals with the small LCD trip computer display. This sits between little LEDs which act as the coolant and fuel gauge. While the funky LED gauge set-up in the 370Z is initially cool, it begins to feel almost tacky and impractical in daily usage. The sun makes the little lights hard to see, forcing you to use your hand to provide shade so you can tell how much fuel you have.

Sitting inside the 370Z you feel cramped. As noted before, the 300ZX is wider, and that instantly translates to a less claustrophobic experience inside the car. As noted before, the 370Z driven was a convertible. In 1990 the 300ZX came as a coupe with t-tops. This gave you the ability to have an open air driving experience, but the security and structure of a hard-top when necessary. The 300ZX has much better visibility than the 370Z with more glass around the cabin. However, it's hard to argue with the 370Z Roadster's visibility when the top is down.

Both cars feature what I would consider terrific seats, but the 370Z's do a better job of keeping you in place thanks to larger bolsters both on the sides and the bottoms. When you put your head on the headrests in the 370Z, the metal base pushes against the middle of your back through the seat back material. This made it quite uncomfortable to put your head on the headrest for more than a minute.

My 1990 300ZX is a 2+2 model which means it has the naturally aspirated (NA) 3.0-liter VG V-6 engine rated at 220 horsepower and 198 lb-ft, though a 300-horsepower, 283 lb-ft twin-turbo (TT) variant was available on non-2+2 models (coupes) in the U.S. The power is sent to the rear-wheels through a five-speed manual transmission (a four-speed automatic was also available).

The 370Z is powered by a 3.7-liter VQ V-6 rated at 333 horsepower and 270 lb-ft. My tester featured the six-speed manual, though a seven-speed automatic with paddle shifters is available.

Nissan introduced a new piece of technology on the 370Z manual transmission called SynchroRevMatch. It automatically blips the throttle for downshifts making you look like a rockstar. At first, I felt the feature was cool, but sort of like cheating. After driving around with it for a week, I still feel knowing how to rev match manually is important, but the technology is very unique and makes daily driving easier and smoother for novices.

My only gripe about the SynchroRevMatch system is the inability to disable it for good. You can push a button each time you start the car and that will turn it off, but it will default back to on each time you start the car. Since the system is included in the sports package, the only way to get a new Z without it is to buy a 370Z with no options.

When the Z32 300ZX came out in 1990, some called it the Corvette Killer. The naturally-aspirated version was good for a sub-7-second 0-60 mph run, while the TT model did the deed in less than 6 seconds. Today, the 370Z doesn't kill Corvettes, but with a sub-5-second run from 0-60, it isn't terribly far behind.

The 300ZX and 370Z offer vastly different driving experiences from the second you turn the key. Speaking of keys, the 300ZX came with a titanium key, while the 370Z comes with a pedestrian, standard-issue Nissan passive key fob with a Z emblem stuck on. The key to the 300ZX is special. Feeling heavy in your hand, it commands attention and gives you an idea that you are about to drive something more than an ordinary car. The 370Z key is just another electronic fob.

Driving down the road you notice immediately how much more noise is transmitted into the cabin of the 370Z. You hear every pebble, and every piece of dirt that hits the wheel wells. Inside the 300ZX all you'll hear is the thrum of the tires against the pavement. No pebbles in the wheel wells.

While the handling of the 300ZX is predictable and progressive, it is nothing compared to the laser-sharp steering in the 370Z. Both cars feature hydraulic power steering, but the feedback provided by the 370Z is much better than that of the 300ZX. Steering is slightly heavier in the 300ZX at all times, while the 370Z steering is more progressive in weight as you gain speed.

The 370Z's powertrain sounds and feels rougher than that of the 300ZX, especially with the engine on boil. Shifts are shorter and notchier in the 370Z; while the shifts are longer in the 300ZX, they feel smoother. As for which is more satisfying, that will come down to personal preference.

One large difference is the brakes: in the 370Z the pedal has a lot of bite early on, where as the 300ZX has a somewhat softer pedal feeling. The brakes in our 300ZX have been upgraded in the front with slotted rotors and ceramic pads, while the 370Z I was testing had the optional sport brake package. Both cars are notorious for not having enough brake cooling which leads to cooked brakes on the track. Bottom line: the brakes are better on the 370Z, but you'll need an upgrade for track days.

So what does this all add up to? After a week with both cars in my driveway the impressions were clear. First and foremost, the 370Z is a true Z car design wise. It wears its heritage on its sleeve. But it is not  the near-exotic the 300ZX was in its day.

The 300ZX was Nissan's top-of-the-line sports car here in the U.S. when it was new. As an owner, you were part of a select group. From the titanium key cut at the factory, to the unique switchgear, it was a different experience than owning an Altima or any other Nissan.

The latest Z isn't even Nissan's fastest car anymore, let alone the most exclusive. As of the R35 generation, the GT-R is finally sold in the U.S., and the Z has been relegated to entry-level sports car status.

Sure, it can compete with a Porsche Boxster or a Cayman, but as an owner, it won't be the same as if you were buying Z in 1990. With parts-bin bits and shared interior elements, the Z is turning into just another Nissan--but it's still a blast to drive, with some serious bang-for-your-buck qualities. I just hope Nissan realizes in the future that owning a Z used to bring with it a special feeling, and brings some of that back in the future.