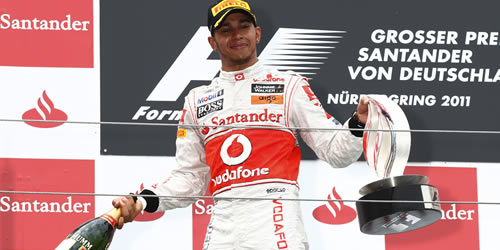 He’s done it again. McLaren’s Lewis Hamilton has won his second race of the season after taking top honors yesterday at the 2011 Formula 1 German Grand Prix, which surprisingly turned out to be relatively dry.

After starting in second, the young Brit managed to fight off Red Bull Racing’s Mark Webber who was on pole to take the lead early on, though the battle would rage on for most of the race.

Hamilton and Webber would swap positions again on lap 12 and 14, with Ferrari’s Fernando Alonso very much at play during most of the race as well. Eventually, the Spaniard would pass Webber and go on to challenge Hamilton.

Mark Webber’s Red Bull Racing teammate, current Championship leader Sebastian Vettel, who started at third on the grid, fell to fourth place after a slow turn on the ninth lap and never managed to regain his composure.

Eventually, Hamilton passed the checkered flag with a total time of 1:37:30.334. Alonso finished in second, just 3.9 seconds behind him and Mark Webber took third position a further 9.7 seconds behind the leader.

The other McLaren driver, Jenson Button, retired the race on lap 35 due to some hydraulic problems.

During a post race interview, Hamilton said: "The fight for the world championship will be very, very, very hard now. We’re back in the fight though, and I really hope we can carry this forward and keep the momentum going."

Given Vettel’s lead in the Drivers’ Championship of 216 points, a full 77 points ahead of second placed Mark Webber, we think Hamilton’s claim is a little bit optimistic. The McLaren driver sits at third in the standings with a total of 134 points.

In the Constructors’ Championship, Red Bull Racing is the clear leader with 335 points, followed by McLaren on 243 points and Ferrari on 192 points.

The next stop on the calendar is the 2011 Formula 1 Hungarian Grand Prix, which takes place next weekend in Budapest, Hungary. Stay tuned for our full coverage of the event.