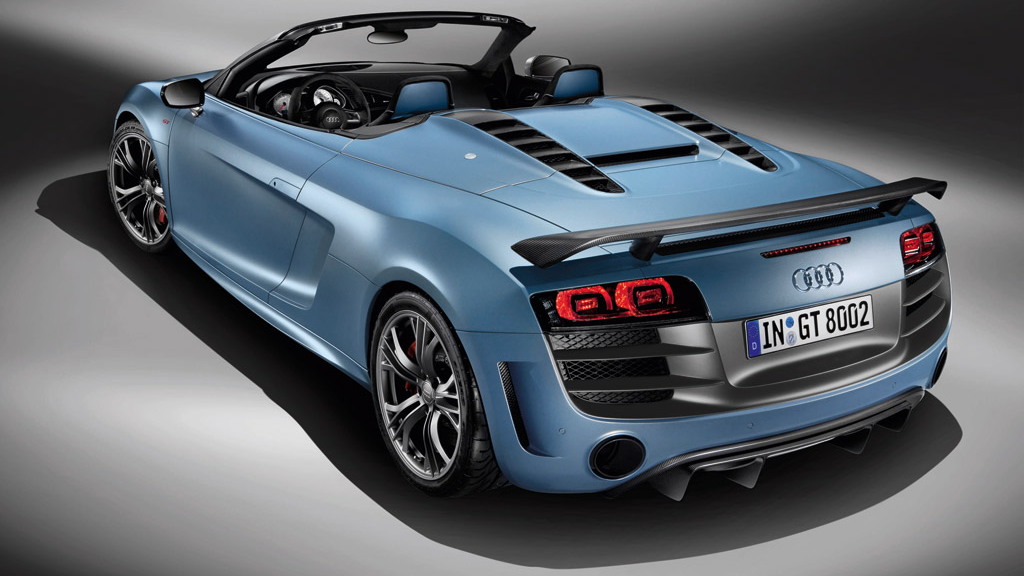 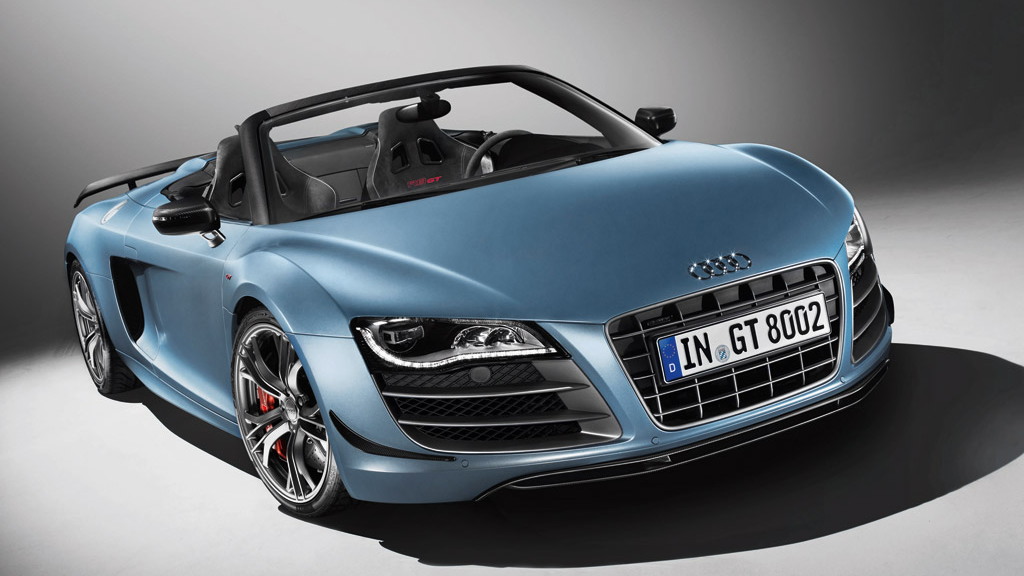 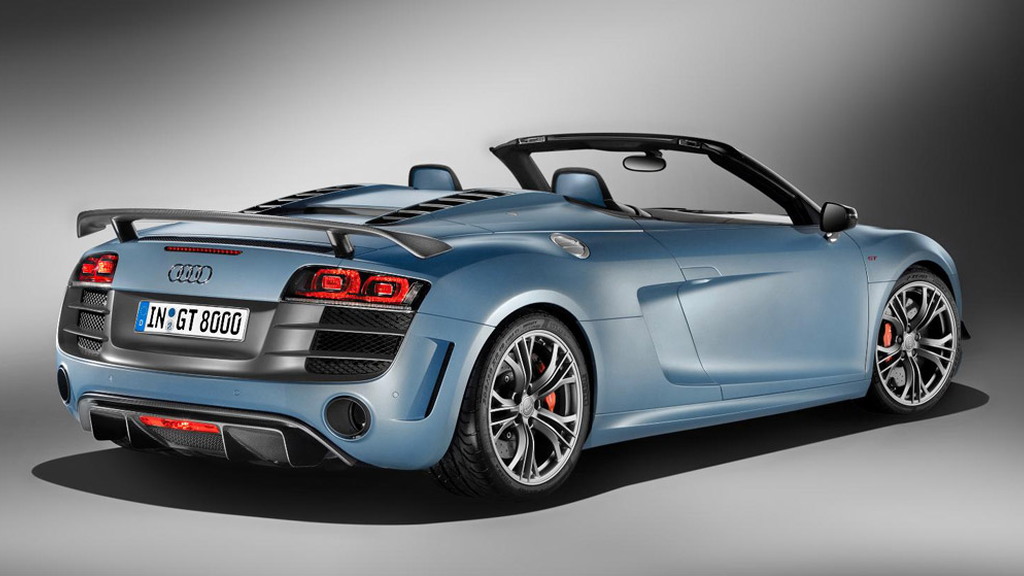 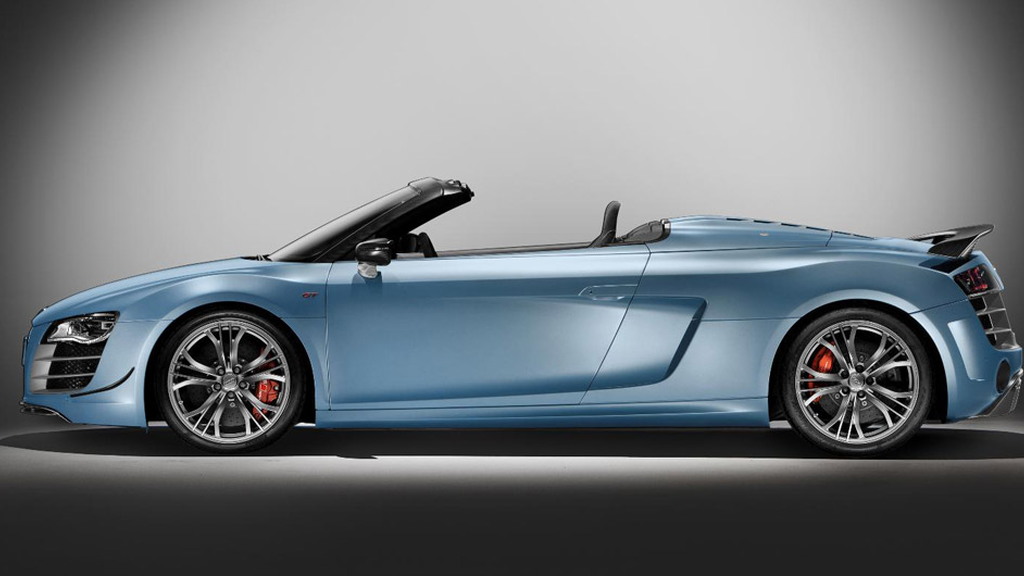 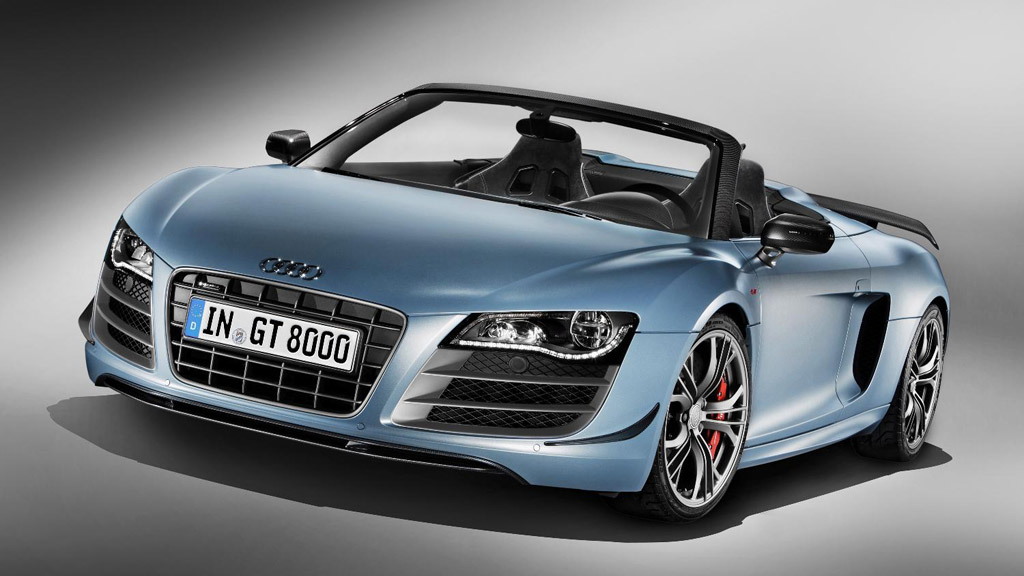 As predicted, the wraps have come off the brand new Audi R8 GT Spyder in the lead up to next week’s Le Mans 24 hours endurance race and ahead of the convertible supercar’s official world debut at the 2011 Frankfurt Auto Show in September.

Like its R8 GT hard-top sibling that recently went on sale, Audi engineers have managed to shed more than 187 pounds from the regular R8 Spyder’s curb weight for the latest GT edition. This was done through the increased use of lightweight carbon fiber and aluminum components, thinner glass and sheet metal and a fixed rear wing in place of the previous automated one.

The engine frame, for example, is made of ultra-light magnesium, while the long cover over the soft-top compartment and the large side panels at the rear are made of carbon fiber-reinforced polymer (CFRP). CFRP is also used for the modified front spoiler, the fixed rear spoiler and the new rear bumper. The end result is a total curb weight of 3,615 pounds.

The hardcore convertible also sports the same 560 horsepower and 398 pound-feet of torque version of the R8 GT’s 5.2-liter V-10 engine, which the automaker claims is good for 0-62 mph acceleration of just 3.8 seconds and a top speed a shade under 197 mph.

There are two separate automatic modes for the transmission as well as a manual mode where the driver can shift gears using the paddles on the steering wheel or by flicking the joystick. At high load and revs, gear changes take only one-tenth of a second. A launch control function is also included.

The suspension setup features aluminum double wishbones up front, which are attached to 19-inch wheels shod with 235/35 tires up front and 295/30 tires at the rear. Carbon ceramic brake discs are standard as is a stability program that can be deactivated entirely.

Visual modifications include add-on parts in contrasting titanium gray, a front splitter with a dual lip, race-style canards at the sides of the front bumper, red GT badges, round exhaust tailpipes, an enlarged diffuser and dark LED tail lights in a clear-glass design. Audi also offers an optional windshield frame in a matte carbon finish.

Of course, the Spyder name indicates that the supercar is still a convertible. It features a fabric soft-top roof that can be raised or lowered in 19 seconds and at speeds of up to 31 mph. An extendible glass rear window is nestled in the bulkhead, separate from the soft top, as is a rollover protection system comprising two pretensioned plates.

Luxurious items include Alcantara, Nappa leather and carbon fiber trim, full LED lights, navigation and a driver information system with a built-in laptimer. Options include a Bang & Olufsen sound system, a Bluetooth interface including a seatbelt microphone and bucket seats with a carbon fiber frame.

Production numbers will match those of the hard-top R8 Spyder, 333 units, and only around 90 of these are likely to make it to the U.S. when deliveries start early next year. Each car will sport a tag with its individual number on the gear lever knob, and you can bet pricing start well above the $196,800 sticker of the hard-top.

Note, this isn’t the only R8 prototype currently testing in Europe. Audi is thought to preparing a new S tronic dual clutch transmission for its R8 supercar, which it looks like it has fitted to these two prototypes spotted earlier, and there’s talk of an even more hardcore ‘Sport’ or ‘NF’ version of the R8 supercar also in the works.