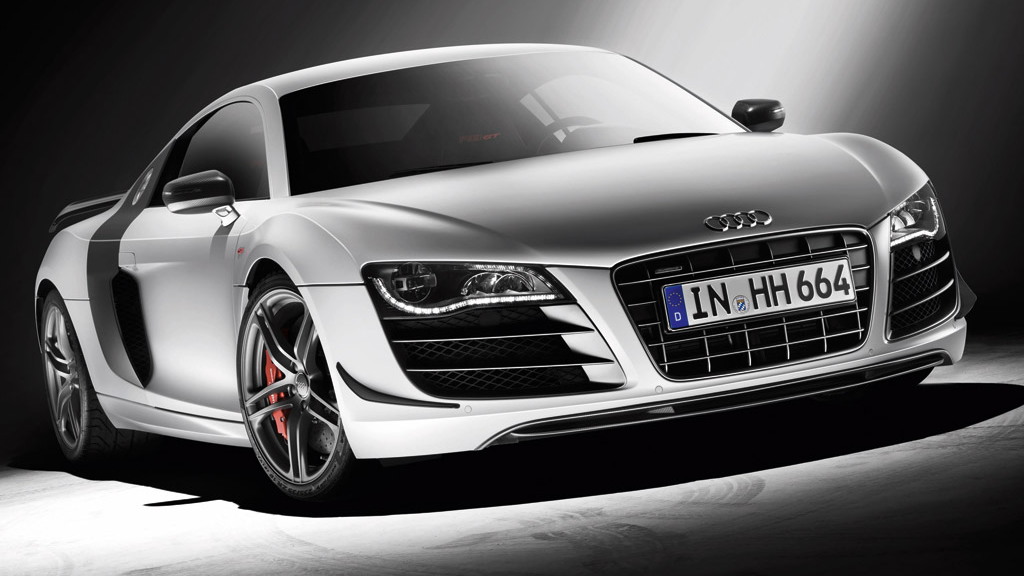 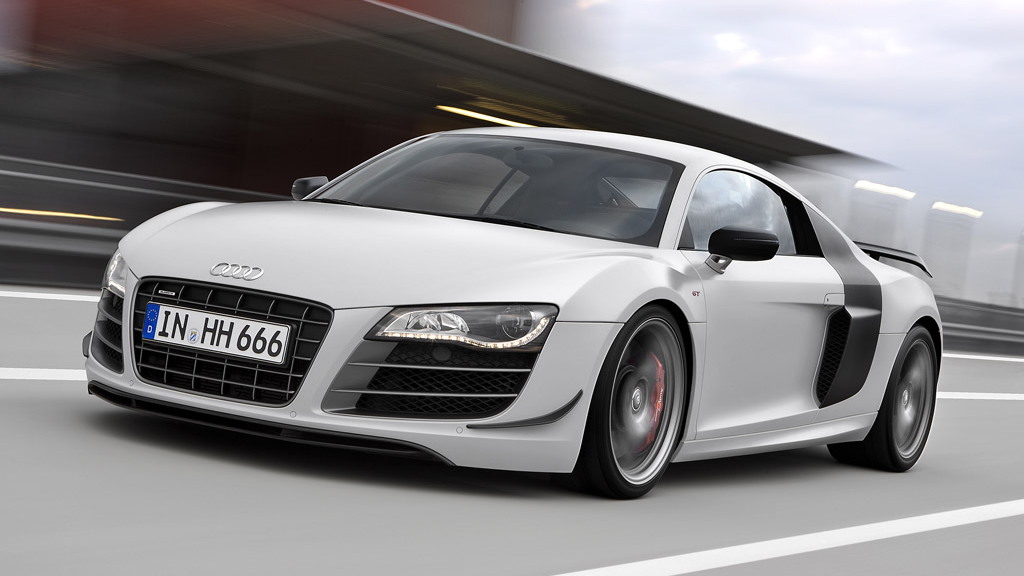 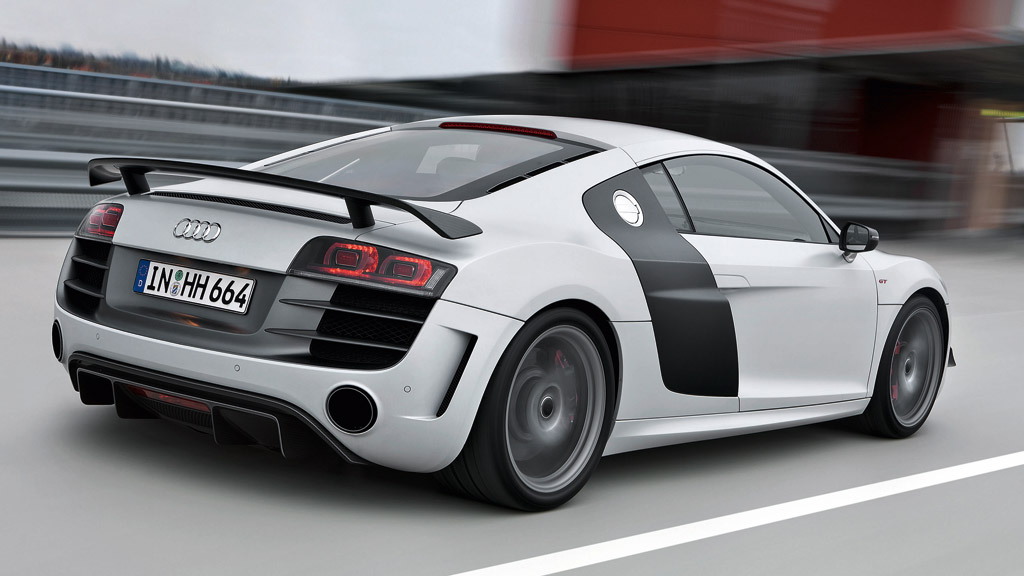 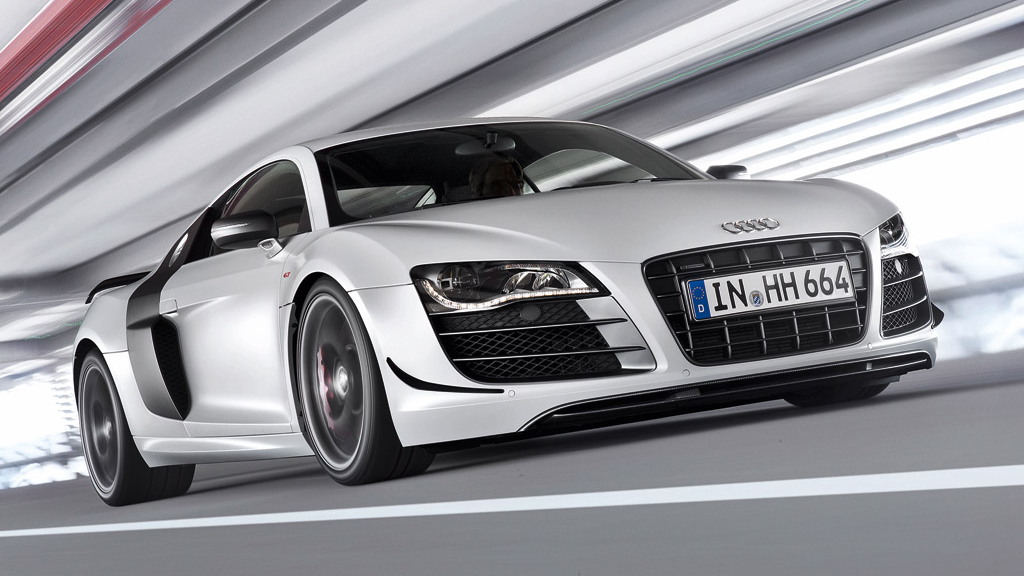 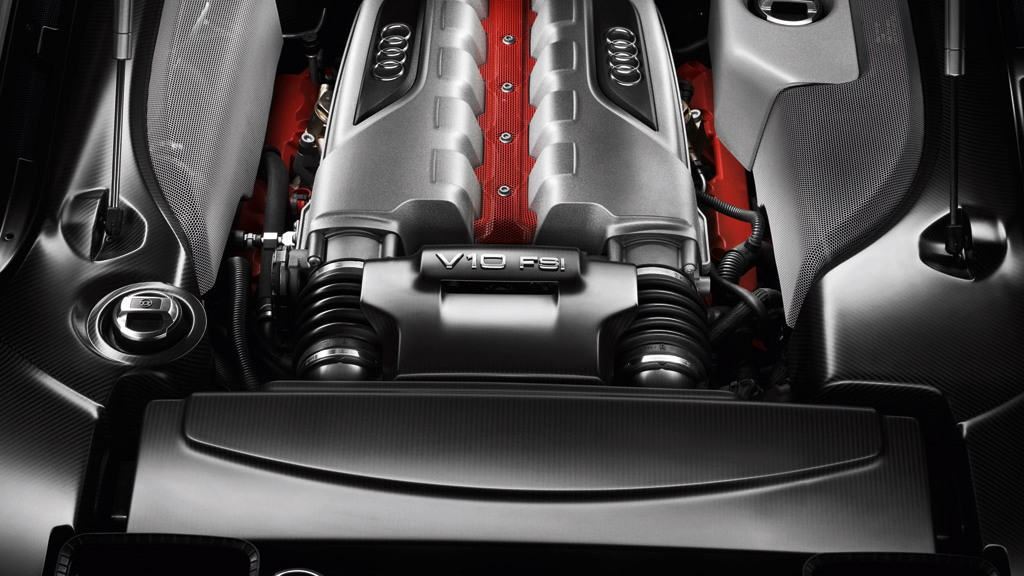 BMW has enjoyed some success with its CSL range of stripped out ready-to-race M3s and Mercedes-Benz has delivered several of its own lightweight Black Series models. That leaves the third major German luxury automaker, Audi, which has now revealed a lighter and more powerful version of its V-10 powered R8 supercar.

Using techniques learned from the construction of the Superleggera models over at sister brand Lamborghini, Audi engineers have managed to shave off 220 pounds from the regular R8 V-10’s kerb weight. They took an elaborate approach involving every aspect of the vehicle, and in the end the scales came to rest at 3,362 pounds. Weight saving features include thinner glass, carbon-fiber and aluminum construction, a fixed rear wing, thinner sheet metal, and lightweight carpeting.

The exterior also underwent numerous modifications that further sharpened the appearance. Many of them also reduce the weight and enhance the aerodynamics. The R8 GT produces even more downforce when driven fast than the production model--without any increase in the Cd value (0.36).

The frame of the single-frame grille, its struts and the slats in the air intakes are finished in matt titanium gray--the grille is painted matt black. The splitter under the bumper has a double lip and is made of carbon-fiber. Carnards at the corners of the nose increase the downforce on the front axle and are also made of carbon fiber.

One highlight of the R8 GT are the standard LED headlights, which use light-emitting diodes for all functions. The defining element of the side view are the sideblades, which direct air to the engine and in the R8 GT are also made of matte carbon. The same material is used for the reduced-size housing of the side mirrors, which are mounted on an aluminum base. The 19 inch wheels feature an exclusive five twin-spoke Y design in a titanium-look finish. The front fenders sport “GT” badges.

The modified V-10, whose cylinder head covers are painted red, gives the Audi R8 GT scintillating performance. Changes to the electronics see an additional 35 horsepower from the ten-cylinder. The V-10 has a specific power output of 107.6 horsepower per liter displacement. Its power-to-weight ratio is 6.00 pounds per horsepower. The engine redlines at 8,700 rpm.

Gear changes in the R8 GT are handled by the R tronic sequential manual transmission. The electrohydraulic clutch and switching unit receive their commands electronically. It changes its six gears much faster than a skilled driver could--within a tenth of a second at high load and engine speed.

The electronic management system offers an automatic mode with the Sport and Normal characteristics, and two manual levels. It’s controlled using the short gear selector lever on the center tunnel and two paddles on the steering wheel. Maximum thrust when starting is ensured by Launch Control--a program that manages full acceleration with high engine speed and minimum wheel slip when starting.

Limited edition is the name of the game and as such only 333 cars will be built in a single production run. As a special touch, each car will have a badge with its production number on the shift lever knob. Audi offers the R8 GT in a choice of four body colors: Samoa Orange metallic, Suzuka Gray metallic, Ice Silver metallic and Phantom Black pearl effect.

Such a model will likely be aimed at well-heeled racing enthusiasts as well as small privateer teams not willing to splurge on the more hardcore R8 LMS race car--though there are always those crazy enthusiasts that keep these extreme machines as daily drivers.