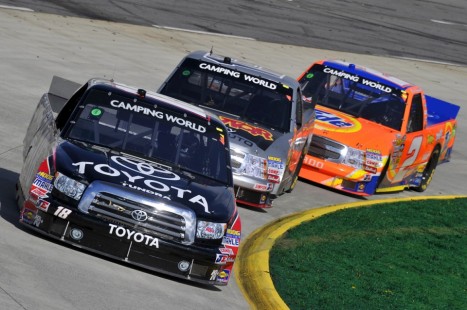 Kyle Busch will be making even more money than usual this year, if reports of Kimi Raikkonen's deal to drive one of Busch's trucks are correct. The reports say Raikkonen will be cutting a check for $100,000 to Busch's team--for every race he enters in the NASCAR Camping World Truck Series.

The grand total could reach $500,000, as Raikkonen is said to be planning a 3-5 race trial this year, fit in alongside his busy WRC scheudle. According to Canada's Rue Frontenac, Busch says he and Raikkonen have never met, but "Raikkonen shopped around for a drive with a number of teams and we won the war."

News of Raikkonen's entry into NASCAR racing broke late last week, with many taking it for an April Fool's joke, including Bob Varsha of the Speed network. It's an understandable take on the move: Raikkonen's quiet, reserved public demeanor and Finnish monotone don't exactly match with the outspoken, outgoing style of most of NASCAR's top drivers.

Whether Raikkonen will get the hang of the high-speed aerodynamics, traffic, and politics of NASCAR racing, however, remains to be seen, though he's testing at Gresham Motorsports Park this week. We'll find out May 20th in Charlotte if he has the good on race day.