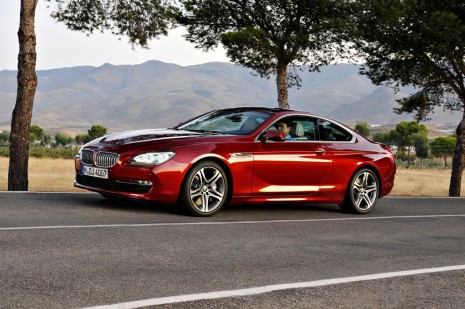 The 2012 BMW 650i convertible has been rumbling around for a little while now, with its sleek lines, 400-horsepower 4.4-liter V-8 and drop top making headlines around the world.

Funny thing is, BMW did the whole 6 Series intro a little backwards. Usually, you'll see the coupe before the convertible, especially considering that the drop-top was unveiled in the winter. Nonetheless, that's the way BMW has rolled it out and now, Part 2 is ready.

The 2012 BMW 650i Coupe doubles down on the sleek lines of the convertible, ditching the heavy looking styling of its predecessor. Gone are the droopy headlights and weird offset trunk. The shape is still immediately recognizable, but the sheetmetal looks tighter, as if the whole car got Botox. There's a bit of history, too. The long, lean coupe is reminiscent of the mid-80s 635 CSi, and there's even a hint of the E46 3 Series coupe around the rear side windows and wheel treatment.

Inside it's pretty much the same beast as the convertible, albeit with less ultimate headroom. The dash boasts BMW's upgraded iDrive system, along with a "floating" 10.2-inch display on the dash, which juts out from the top of the dash, rather than integrating into it..one wonders how it will read in direct sunlight. Behind the screen is a pop-up "acoustic lens" courtesy the optional Bang & Olufsen surround sound system. The new 650i also boasts the full suite of BMW ConnectedDrive technologies, as well as a full-color head-up display.

BMW notes that the new 6 Series is wider and lower than the outgoing model, but also boasts more head room, and it comes with a large 16.24 cu.-ft. trunk. The tiwn-turbo V- engine is connected to either a six-speed manual of eight-speed automatic transmission, ensuring you and your companion will be whisked to your destination quickly, with all your luggage, and in complete comfort.

Prices aren't set just yet, but don't expect it to be cheaper than last year's model, which started out around $80,000. It will go on sale this fall.