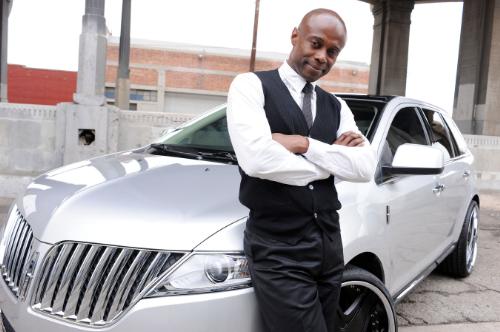 Kem and the 2011 Lincoln MKX for DUB Magazine

Usually things slow down a bit at this time of year, but not when it comes to celebs and their fondness for cars. Over the next few days, we expect to hear about starlets buying expensive rides for their honeys (and vice versa) but for now, in addition to the pieces you've already seen about Michael Vick, Snoop Dogg, and Bret Michaels, here are six more celebrity stories sitting on our desk:

• Laurence Fishburne has been dubbed the new voice of Cadillac. Which is a little weird, since we thought that Mad Men's John Slattery had that gig all wrapped up. What next -- John Hamm booted from his stint at Mercedes? Lady Fate is feeling fickle these days.

• Formula One bigwig and renowned he-man woman-hater Bernie Ecclestone was recently mugged for his £200,000 watch. So what better way to commemorate the occasion than to shill for the watchmaker? It works fine in theory, but why'd the makeup artist give him Divine's makeup from Pink Flamingos?

• Nicole Kidman and Keith Urban have paid an undisclosed sum for a new high-rise condo in New York City -- and just for kicks, they shelled out an additional $1 million so they could park their car outside the front door. Which is fine, but if they'd bought in Scarsdale, that feature would've probably come with the house. [via John]

• R&B singer Kem has been named coverboy for the January/February issue of DUB Magazine. His co-star? The 2011 Lincoln MKX. The shot looks nice and everything, but why does the press release keep using the word "intimate"? Is there something we should know about that backseat? [via Marty]

• NASCAR superstar Rick Hendrick ponied up $250,000 for the second Chevrolet Volt to roll off the assembly line. That may seem a little high, given the Volt's $41,000 asking price, but we've heard floor mats are extra. [via Eric]

• Speaking of the Volt: Jay Leno's on-again, off-again relationship with the Volt is apparently on again. The talk show host, car nut, and Conan-slayer picked up a Volt of his very own last week. We're happy that the two are on good terms, but if we were the Volt, we'd occasionally check Jay's collar for lithium stains. Here's a clip of Jay professing his undying love. [via Eric]: