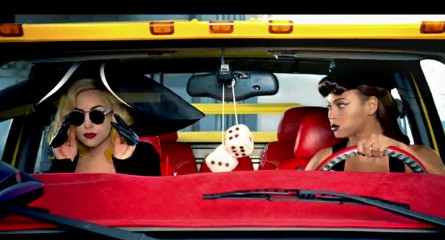 Screencap of Lady Gaga & Beyonce in the video for 'Telephone'

This, friends, is a cautionary tale, and one that makes it all too clear that the world would be a better place if everyone drove supercars. Lend an ear.

Last week, Beyonce and hubby Jay-Z were tooling around London in a Mercedes-Benz S-Class. (Clearly, his love affair with the Jaguar XJ has gone south.) All of a sudden Mrs. Z decided that she wanted to stop in at Harrod's for a little high-end shopping -- which seems like the sort of thing that megastars might plan in advance so that store security isn't suddenly swamped with thousands of screaming fans, but whatever. Sasha Fierce is nothing if not whimsical.

Then, as Beyonce opened the car door, a London taxi breezed by and took it off. A split-second's difference in timing, and it would've been Lady Di and Dodi al Fayed all over again. (Come to think of it, Dodi's daddy used to own Harrod's. Yeesh, conspiracy theorists would've had a ball with that one.)

1. Always look carefully before opening your car door into traffic.

2. Always drive something with butterfly doors -- preferably not the aftermarket, kit-car kind, but those that come standard, like the ones on the SLR McLaren that Beyonce is posing with above. You know: sensible stuff.