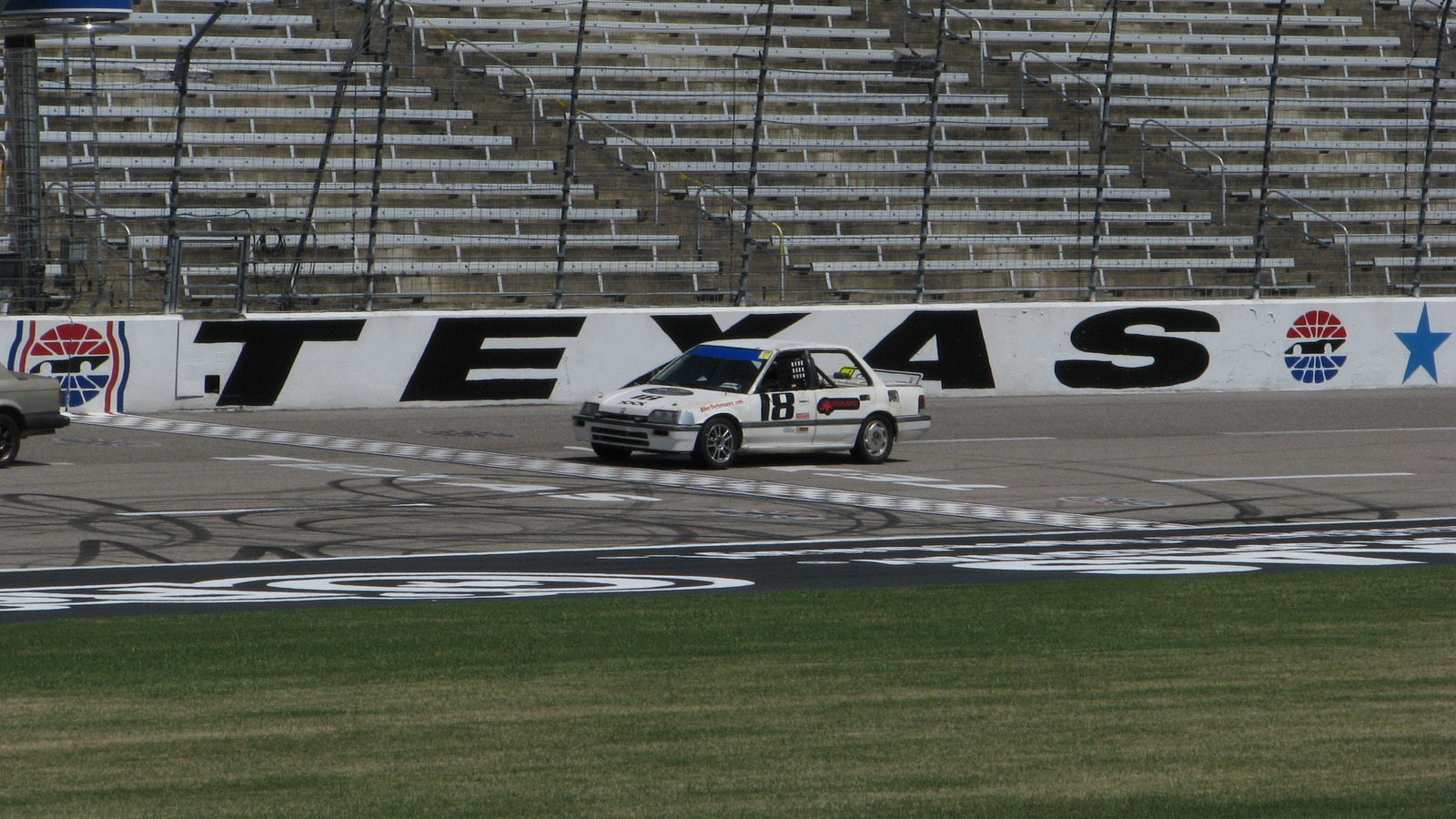 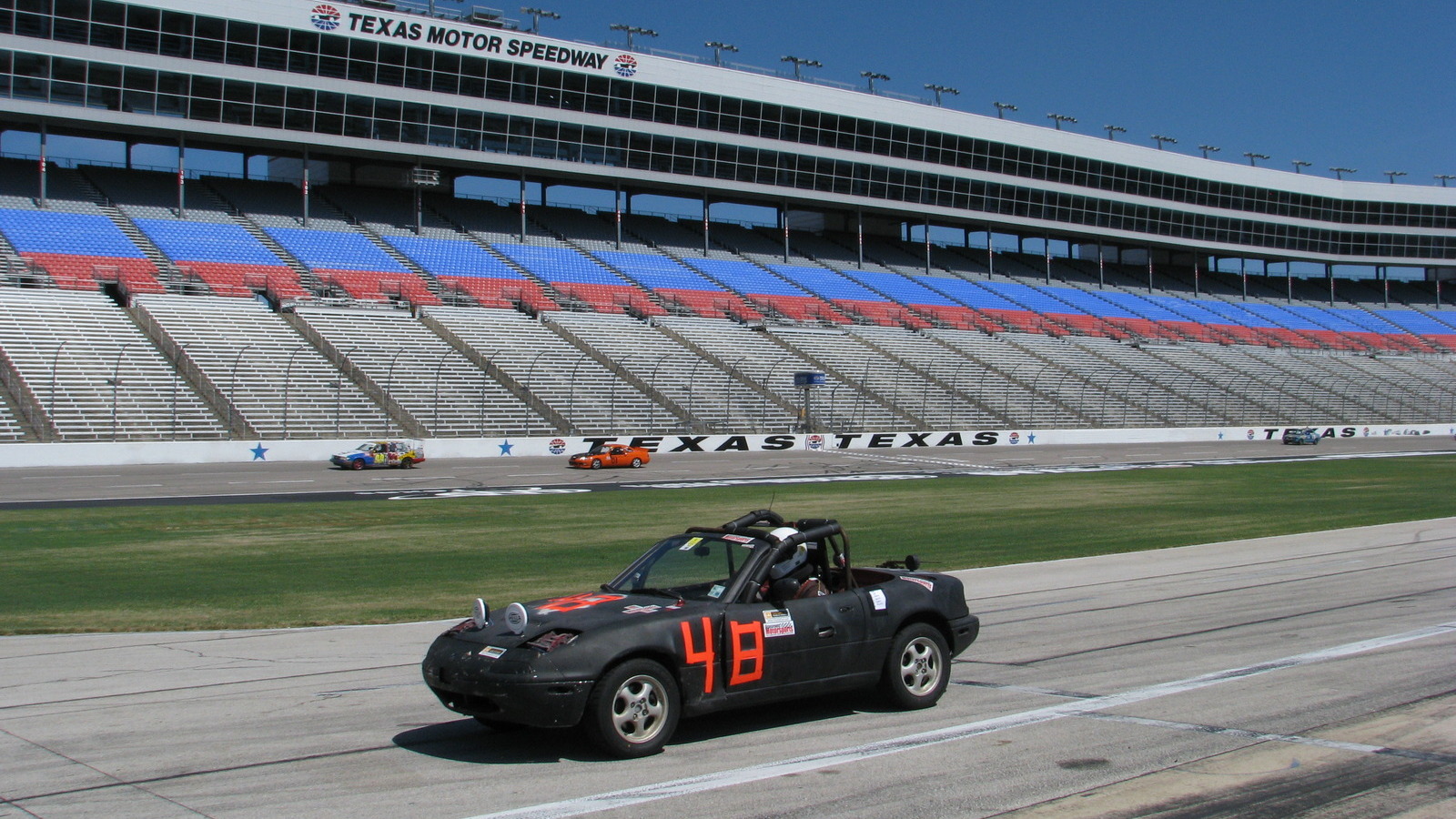 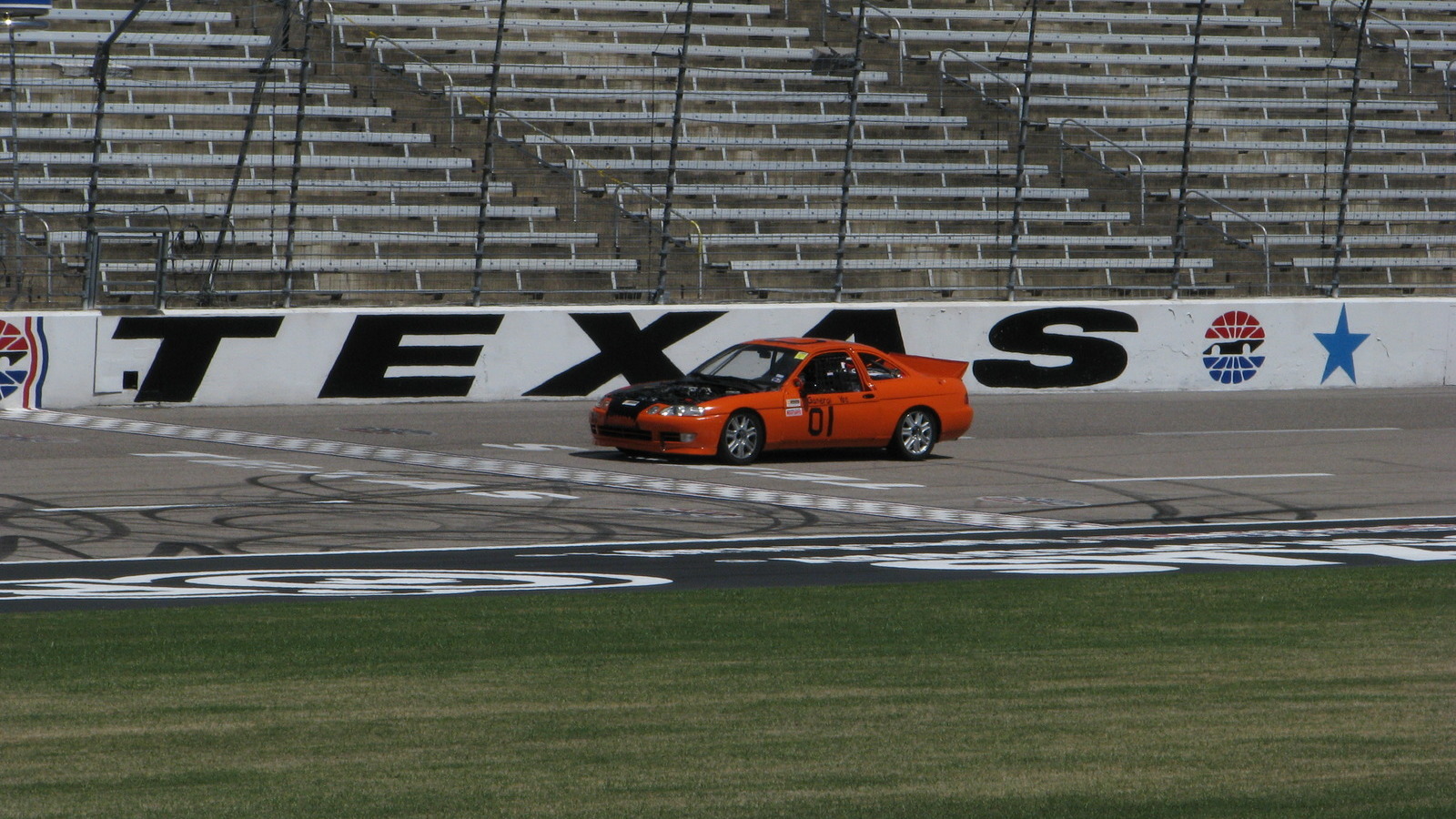 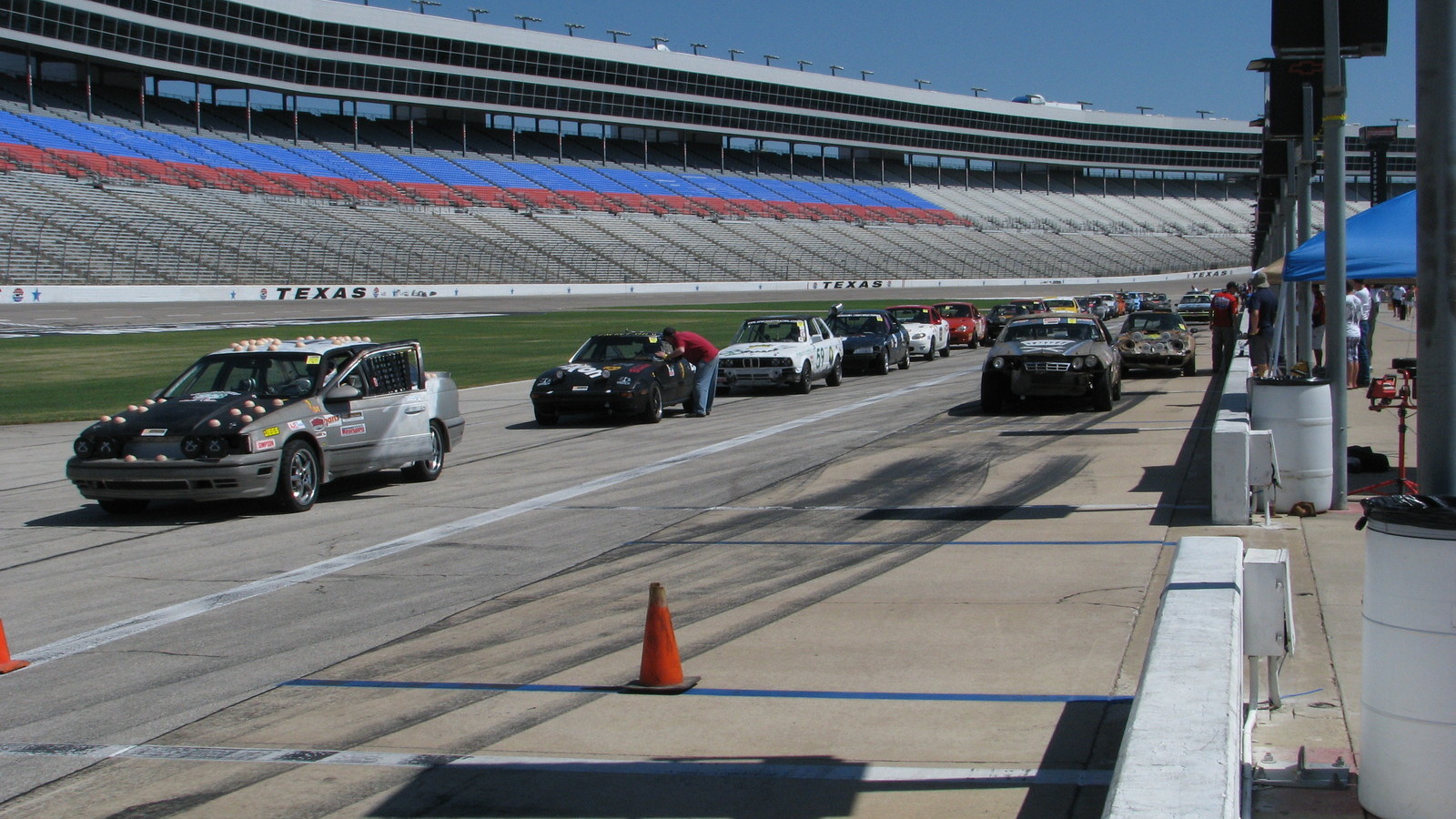 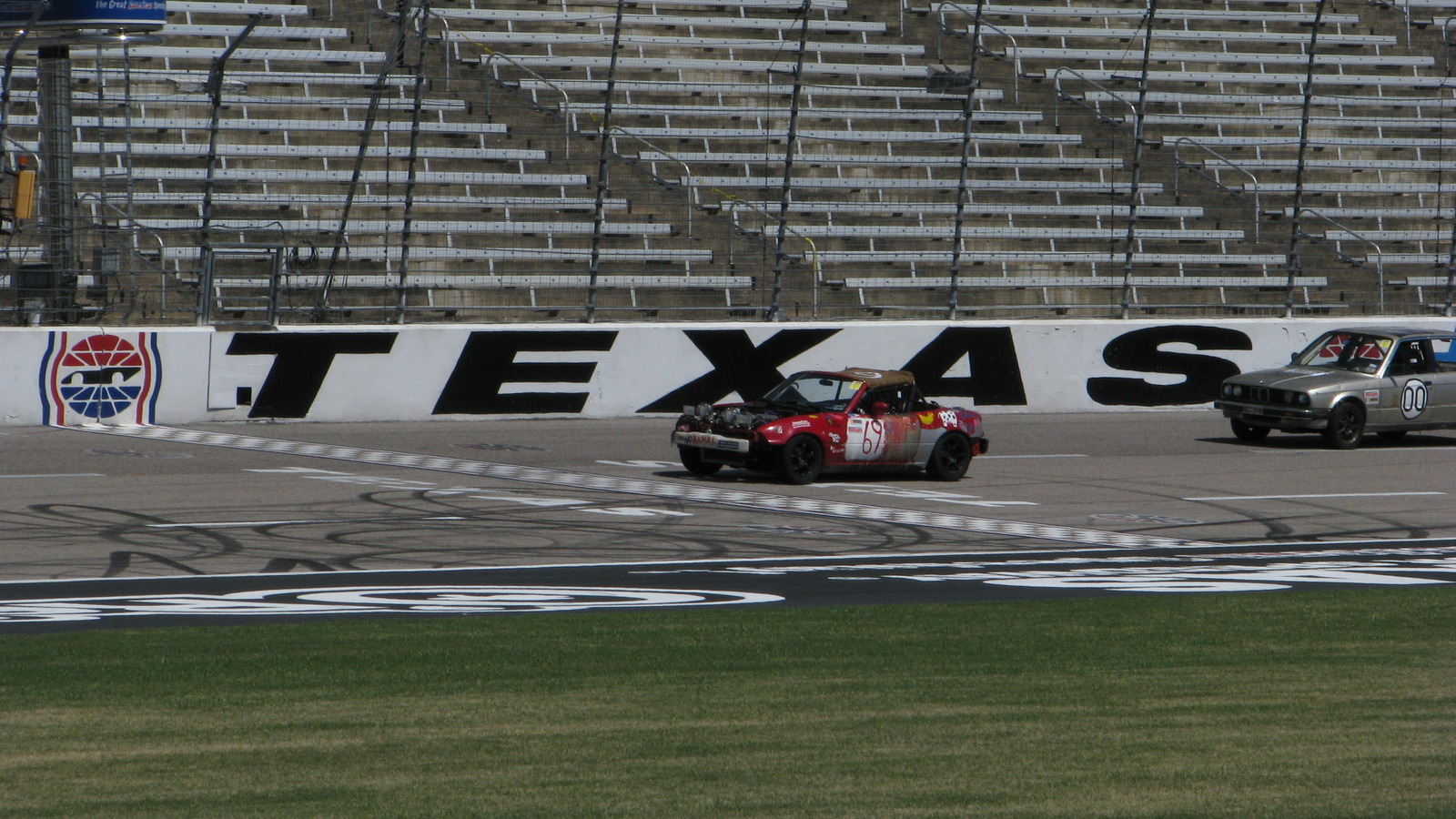 31
photos
Exhausted, sweaty, and nervous, we watched the final laps tick by, mounting the pit wall to cheer as our car took the checkered flag in second place after 24 hours on the track. Thus ended the 2010 Chumpcar 24 hour race at Texas Motor Speedway--for our team, at least.

Other teams saw an earlier end, with the #99 BahnStormers Volvo on and off the track with oil pump issues, the #33 F1 Rejects Thunderbird out with brake issues, the #17 Property Devaluation Thunderbird suffering with a broken transmission, the #97 Live Oak Nudist Resort Taurus SHO on and off the track with multiple failures, the #00 BMW 325e using up all of its tires, and the #38 MC Rusty Racing Celica also with brake failure. Endurance isn't just about the drivers.

But it is also hugely about the drivers. With our team having no pit crew beyond the six drivers--though we had an excellent support crew that fed us, made sure we were hydrated, and gave us ample moral support, in addition to making several fuel runs--we all had to work the entire race, catching whatever sleep we could along the pit wall between stops. In the Texas heat, just staying awake for 24 hours is a challenge. Doing it in a race environment is a feat of will.

The #18 White Lightning Honda Civic Sedan
Our car, the underpowered but on rails Civic, beat the odds of Honda head gasket failure thanks to a smart strategy of preserving the engine with low revs. Despite the easy-going approach, we managed to run lap times within seven seconds of the fastest lap and within three to five seconds of the fastest average laps.

As night fell and the heat and activity took its toll, it required all of our focus just to handle the basics--driver changes, refueling, topping up the oil, and keeping an eye on the tires. All other thoughts and concerns slipped away.

Two of our drivers had never competed in a race before, much less one of 24-hour proportions. It's a steep curve jumping behind the wheel with 25 other cars on track, but both drove very well and learned quickly, keeping the car on pace while extending fuel stints to keep us on schedule.

Huge credit for our success driving a 90 wheel-horsepower Honda to second place on the high-speed roval goes to Daniel Vaught's setup magic, getting the car to hookup through NASCAR turns 1 and 2 at full throttle and over 100 mph. The infield was our playground, and we were able to pass almost at will whether on the inside, outside, or under braking. There's a lot to be said for a lightweight car in any form of racing, but particularly so for endurance.

An extended battle for second place between our car and the #9 GasHole Motorsports Honda Accord developed in my final stint, from 8-10 a.m., with passes and re-passes for more than 20 laps. We both drove hard and took every opportunity, but the racing was clean and fair throughout. We ended up winning the fight, however, finishing the race two laps ahead despite nursing fuel for the final two stints due to my over-use of the throttle in fighting the Accord.

At the checkered flag, the little white car saw over 1,400 miles at average speeds of about 68 mph around the 2.2-mile course, which featured several sharp, kinked turns in the infield and a run around 90 percent of the 1.5-mile oval.

The Rest Of The Field
There were many other approaches to car selection and preparation, however. Some cars went a bit beyond the $500-car rules and were penalized laps but still managed to run to the front early on, including the #5 Millenium Talon and the #01 General Yee Lexus SC400. Unfortunately all the power they were packing put them on the trailer before the race was done, with the #01 General Yee car among them, blowing an engine in dramatic smoke-spewing style after laying down the fastest lap of the race.

The #59 Serious Business Racing BP BMW, playing humorously on the British oil company's infamous oil spill in the Gulf, also put down some brilliant times, but was forced to spend time off track for multiple repairs. If they'd kept it together for the full duration, they would likely have won the race. They did manage to pull it together and catch the #9 GasHole Accord in the final laps of the race, taking third place.

Special mention goes out to the #00 Two Beaners In A Bucket (their name, not ours...) Mazda Protege for dragging a true junkyard find out to the track with little more than the requisite safety gear and competing. Though it was slow, it definitely maxed out the spirit of crapcan racing. The #15 Shade Tree Engineering BMW 325e was another quick and minimal build finished in all of three weeks (they even kept the stock automatic transmission), and though they too were off the pace, they hung in and finished against all odds.

Real Racing, Despite The Low-Budget Theme
We've said it before, but it's a point worth driving home. The Chumpcar World Series isn't just a bunch of beaters out to blow up and scatter parts around road courses. If you can look past the rusty, beat-up exteriors, you'll find these grassroots endurance series stack up as some of the best road racing in the country--and they're accessible to anyone with a moderate budget and the desire to race.
Some cars pushed the limits of the $500 rules, and some cars exceeded them, but all of the cars on track were out to race, whether for fun or victory, and all of them delivered.

At the end of the 24-hour run, about half the field was broken or otherwise retired, but that's exactly the same result as the professional teams at the 24 Hours of Le Mans run just a few weeks ago--28 of the 56 cars that entered retired before the checkered flag. Who says the Joes can't do it as well as the Pros?