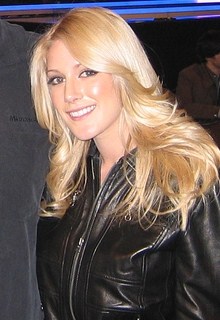 Last year, Heidi Montag gave her new husband, whatshisname, a 1968 Chevrolet Camaro SS. And for some reason the world cared.

Apparently the guy still owns it, because behind the link we see la Montag perched against its hood in a near life-like pose, in so far as any 23-year-old who's undergone at least 13 cosmetic procedures* can really be considered "life-like". Which means that the Camaro SS has a longer shelf-life than most things in the Montag world, including hair color, lip size, and marital bliss.**

*Rather than stop at such an inauspicious number, Heidi is having a 14th procedure done this summer: another breast enlargement. Unfortunately, she's already smuggling the largest implants available under America's boob overlords (aka the FDA), so Heidi's going to Europe for the surgery. That'll put her at an H-cup -- as in "H, for Heidi". Move over, Angelyne: your replacement has arrived.