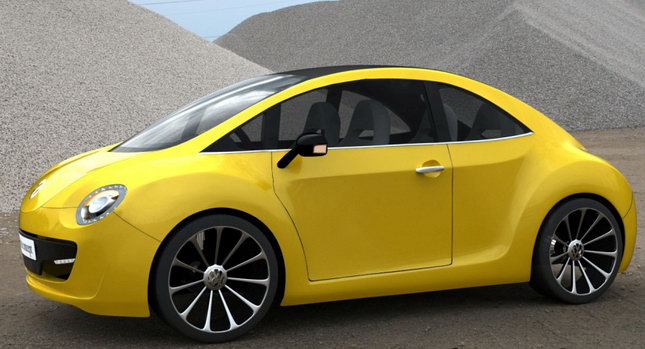 Although the re-born Volkswagen Beetle is nearing it's last year of production, we will apparently be presented with another new one in 2012.  The current "bug" has quite successfully captured the unmistakable look of the original "people's car", while appealing to the modern masses.

Designer David Cardoso aims to maintain the spirit of the timeless Beetle, but with a vision of new styling and updated technology.  His design is unmistakably beetle-y, and quite attractive, if you ask me.  It fits in nicely with VW's current and upcoming lineup too.  Bold body lines and LED lighting complete the package, bringing the bug up to date and into the future.

The updates continue beneath the bug's attractive new shell.  Cardoso imagines a completely electric vehicle, completely lacking harmful emissions.  Small, electric cars are certainly growing in popularity, and this little beetle would make a nice addition to the bunch.

I must say, I've always thought the New Beetle was a bit... girly looking.  There's certainly nothing wrong with a girly car.  Agree with me or not, you've got to admit that this is one cool-looking bug.  I'm definitely with Carscoop on the looks of Cardoso's concept being a big step towards the masculine end of the spectrum.