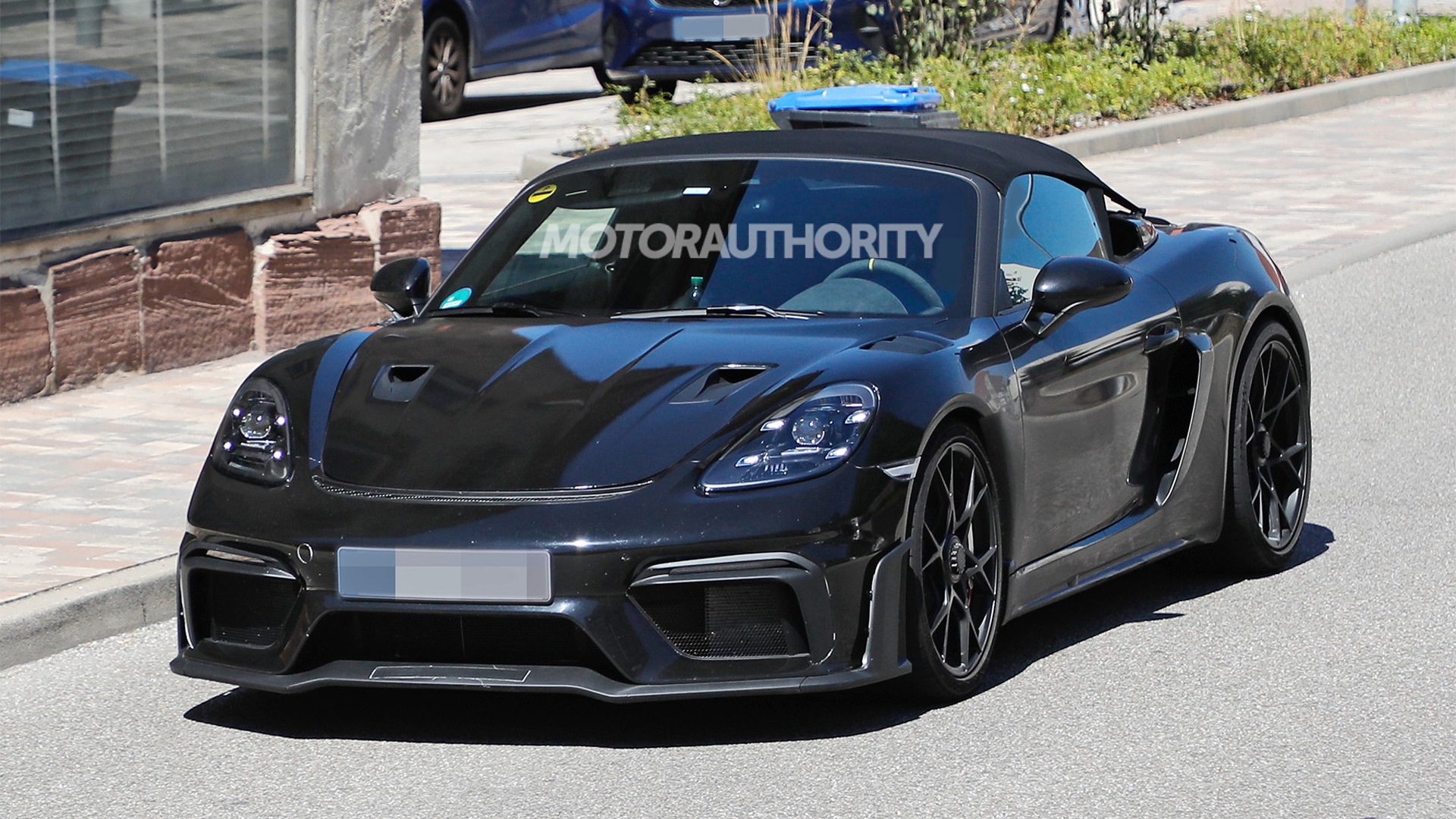 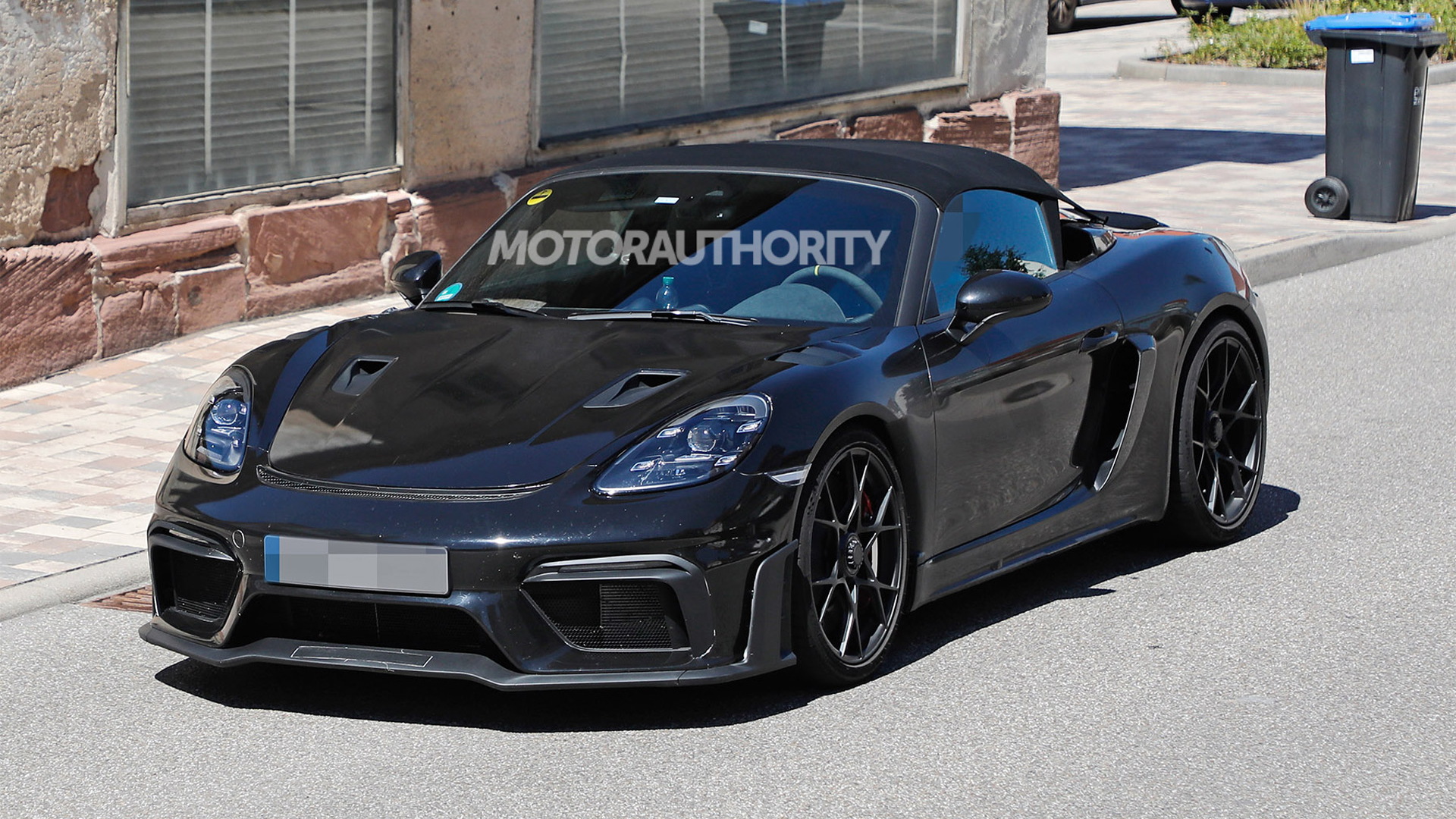 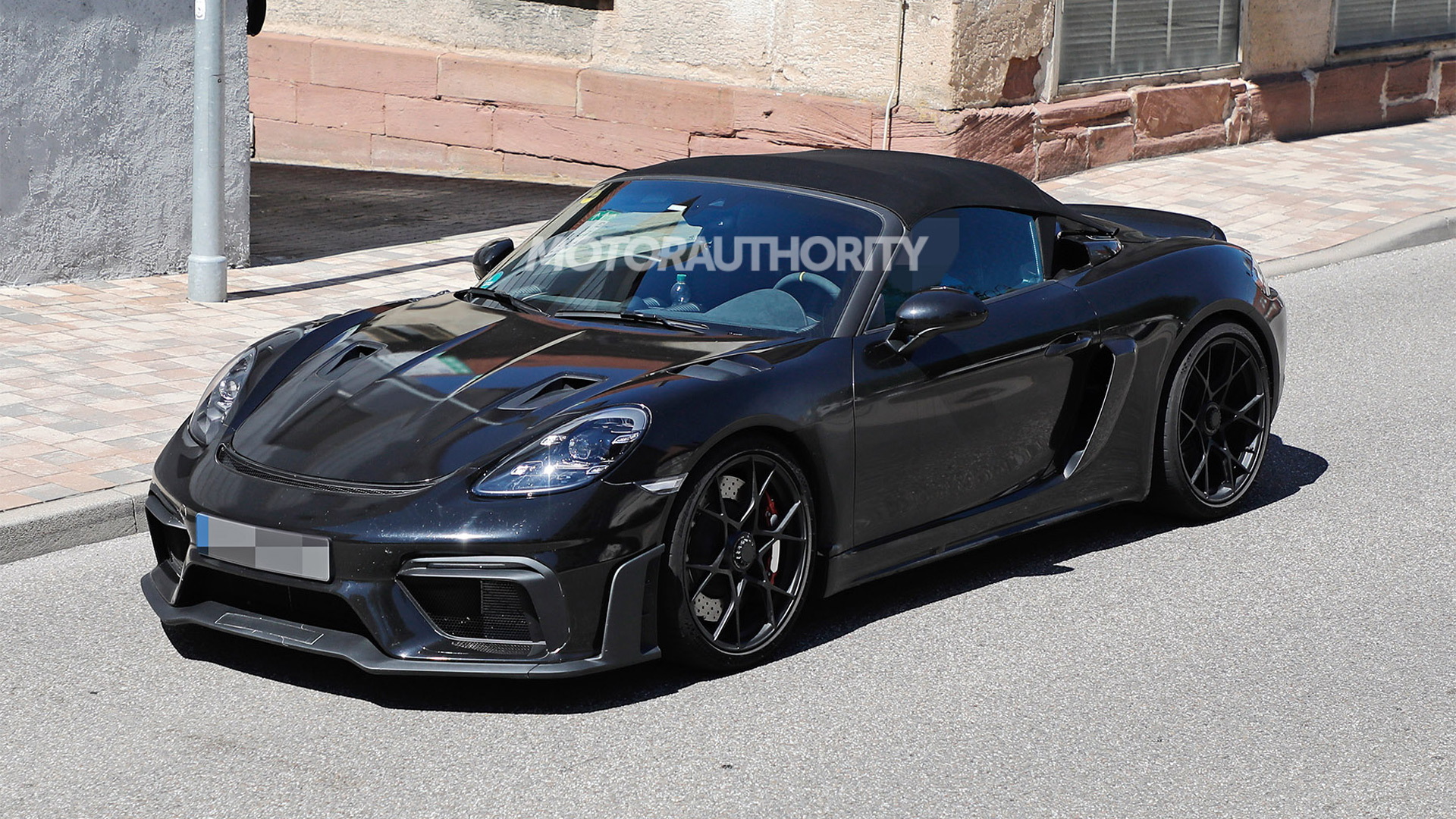 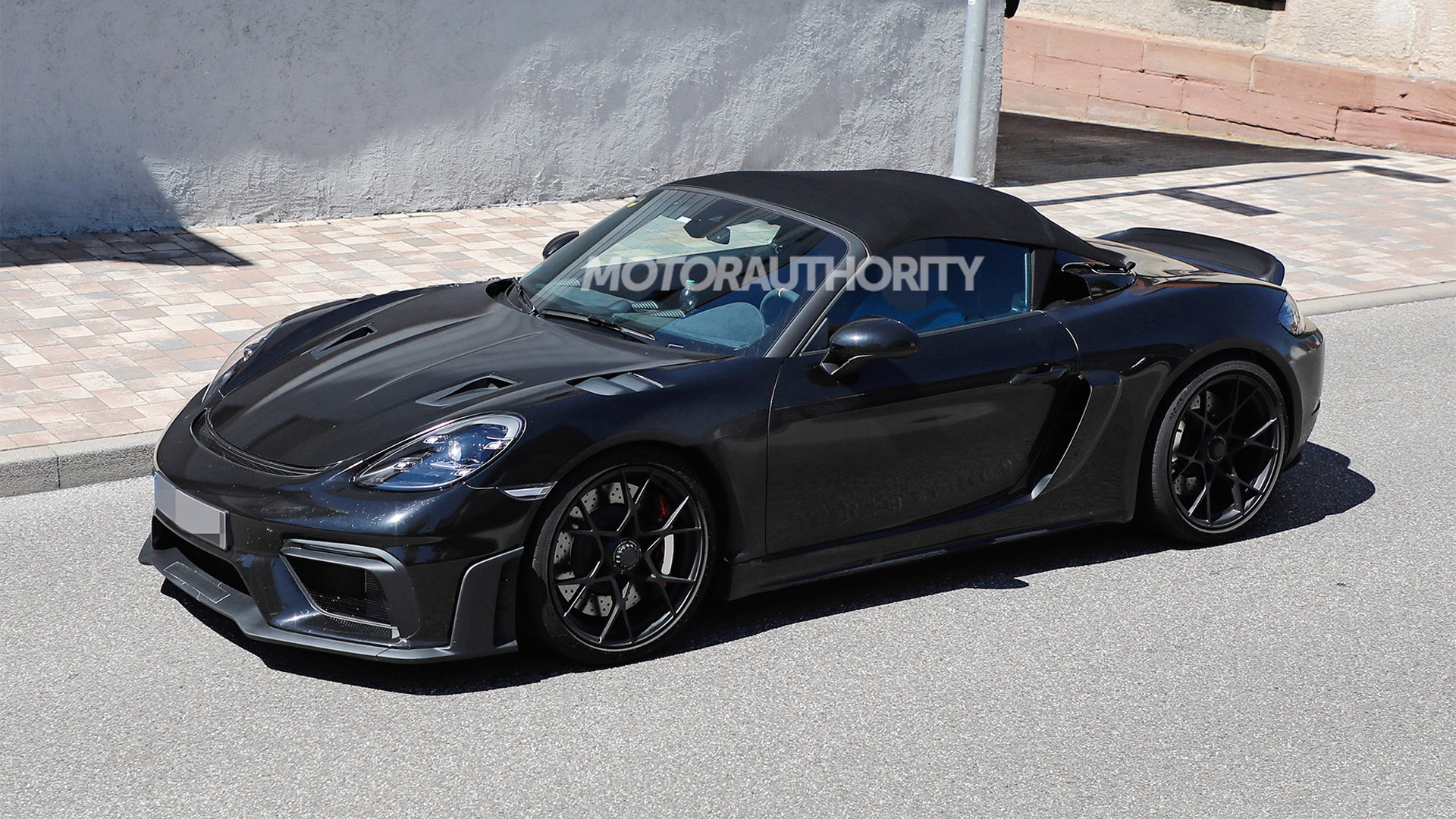 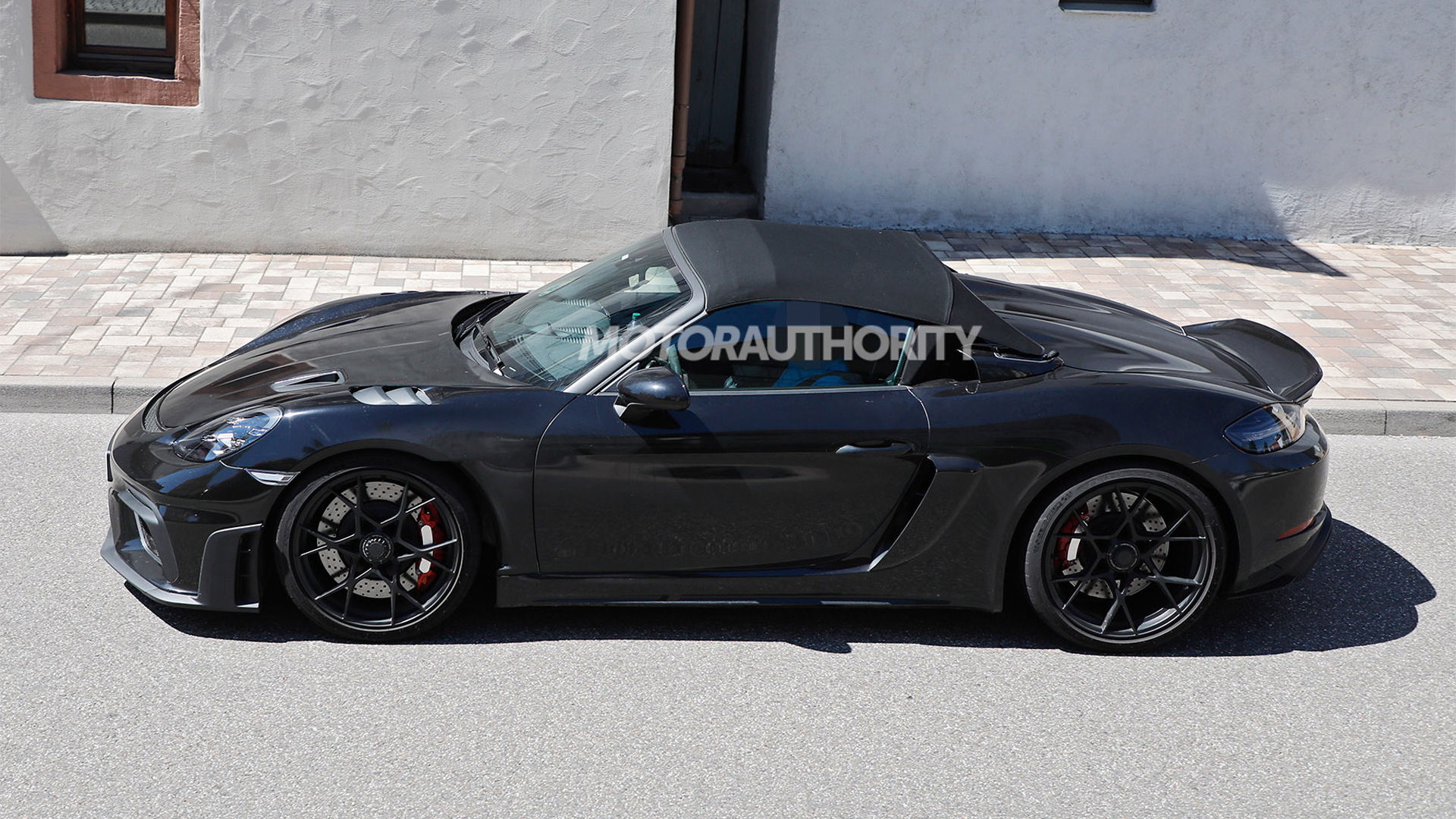 The Porsche 718 Cayman spawned the hardcore GT4 RS variant for the 2022 model year, and soon its 718 Boxster sibling will spawn its own hardcore variant.

Our spy shots capture a prototype for the hardcore 718 Boxster which features the unique Spyder body. It should arrive early next year labeled the 718 Boxster Spyder RS, or something along those lines.

It’s easy to spot the car as the Spyder version of the Boxster due to the characteristic rear humps behind what’s almost certain to be a minimalist cabin. The convertible roof seen here is also unique to the Spyder body style, chosen due to its streamlined design and lightweight properties. The design is a tribute to the 718 Spyder from the 1960s.

The last Boxster Spyder is already a brilliant car. Topping it will be next to impossible but Porsche will likely attempt to do so by upping power to around 493 hp in the Boxster Spyder RS via the application of a slightly detuned version of the same 4.0-liter, 9,000-rpm redline flat-6 found in the 911 GT3. The engine also features in the Cayman GT4 RS.

While in the GT4 RS the engine is coupled exclusively to a 7-speed dual-clutch transmission, with any luck we'll see a manual transmission offered as an alternative in the Spyder RS.

Beyond the engine, upgrades should include lowered suspension, a more aggressive aero kit with larger intakes, plus uprated brakes and sharpened steering. You'll notice that the prototype features the same front and rear fascias as the Cayman GT4 RS but not that car's side intakes. The side intakes on the prototype are scoops placed on the top of the rear fenders.

Production will be limited, so if you’re interested in parking one on your driveway you better start cozying up to your local Porsche dealer. These special editions typically sell out fast.

Both this Boxster Spyder RS and the Cayman GT4 RS are likely to be the last versions of the current 718. Porsche has confirmed plans to launch an electric 718 in 2025, but before then we may see the introduction of an updated 718 with a gas engine, with the gas and electric versions possibly sold alongside each other for a short period.