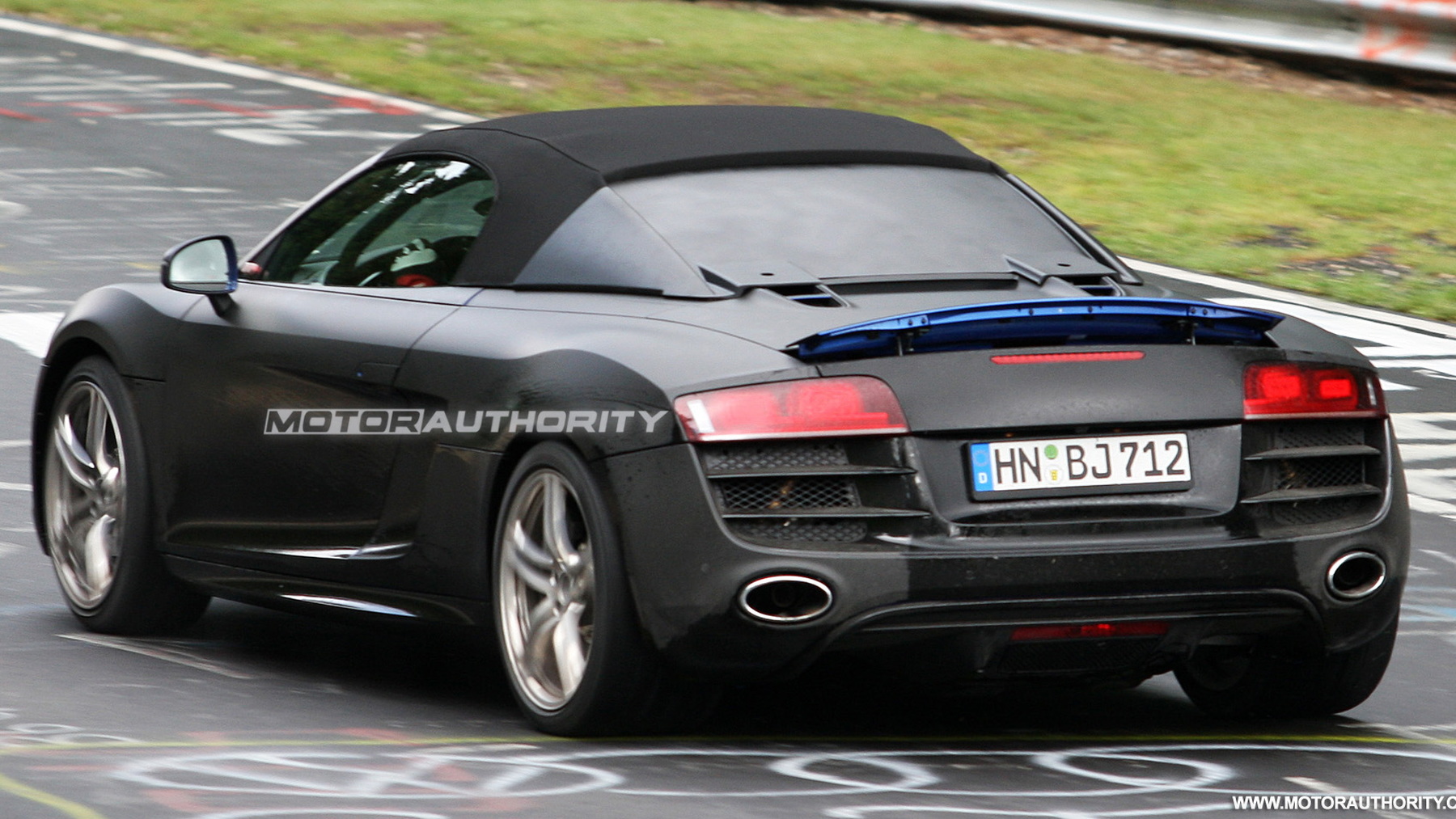 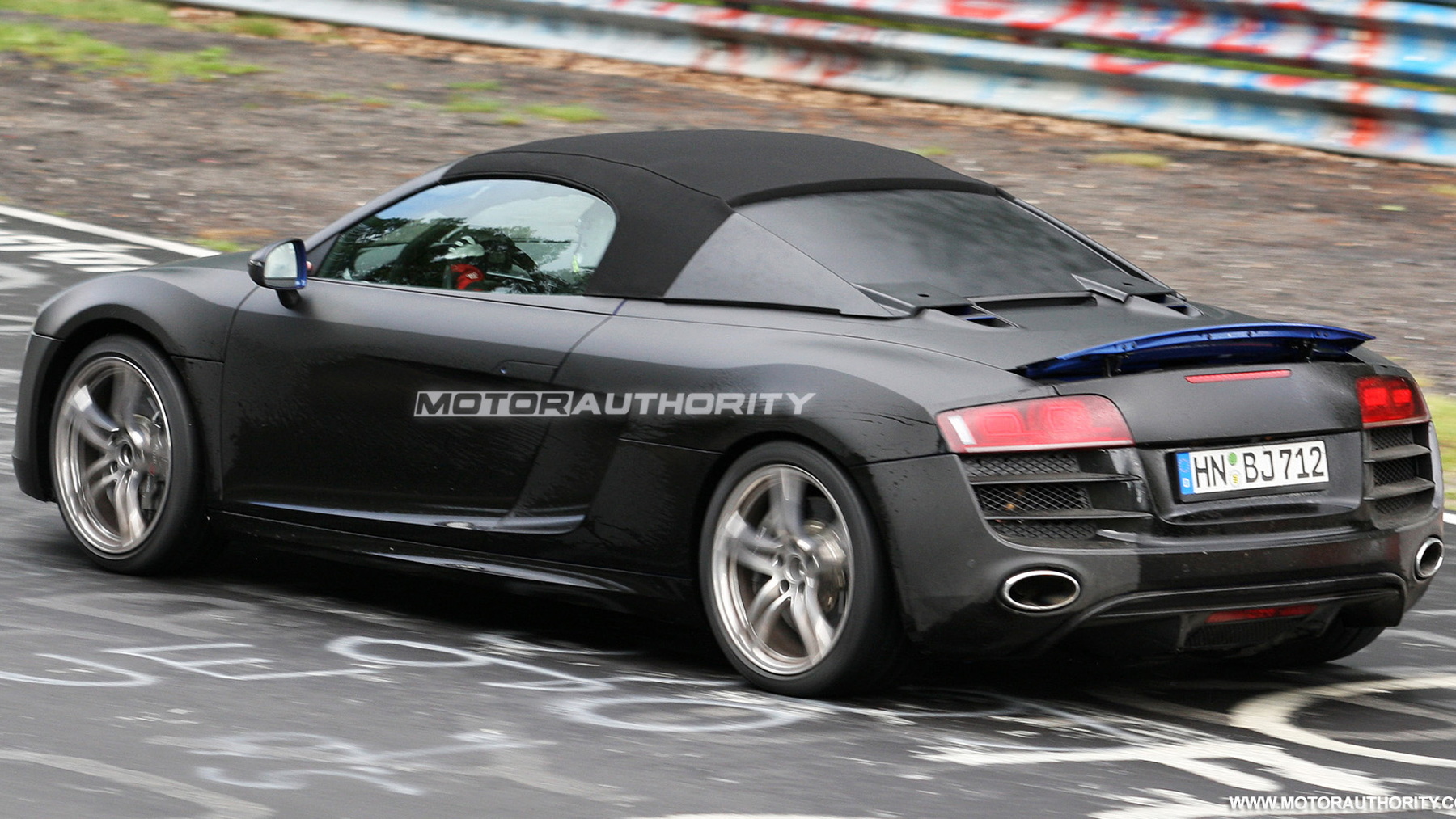 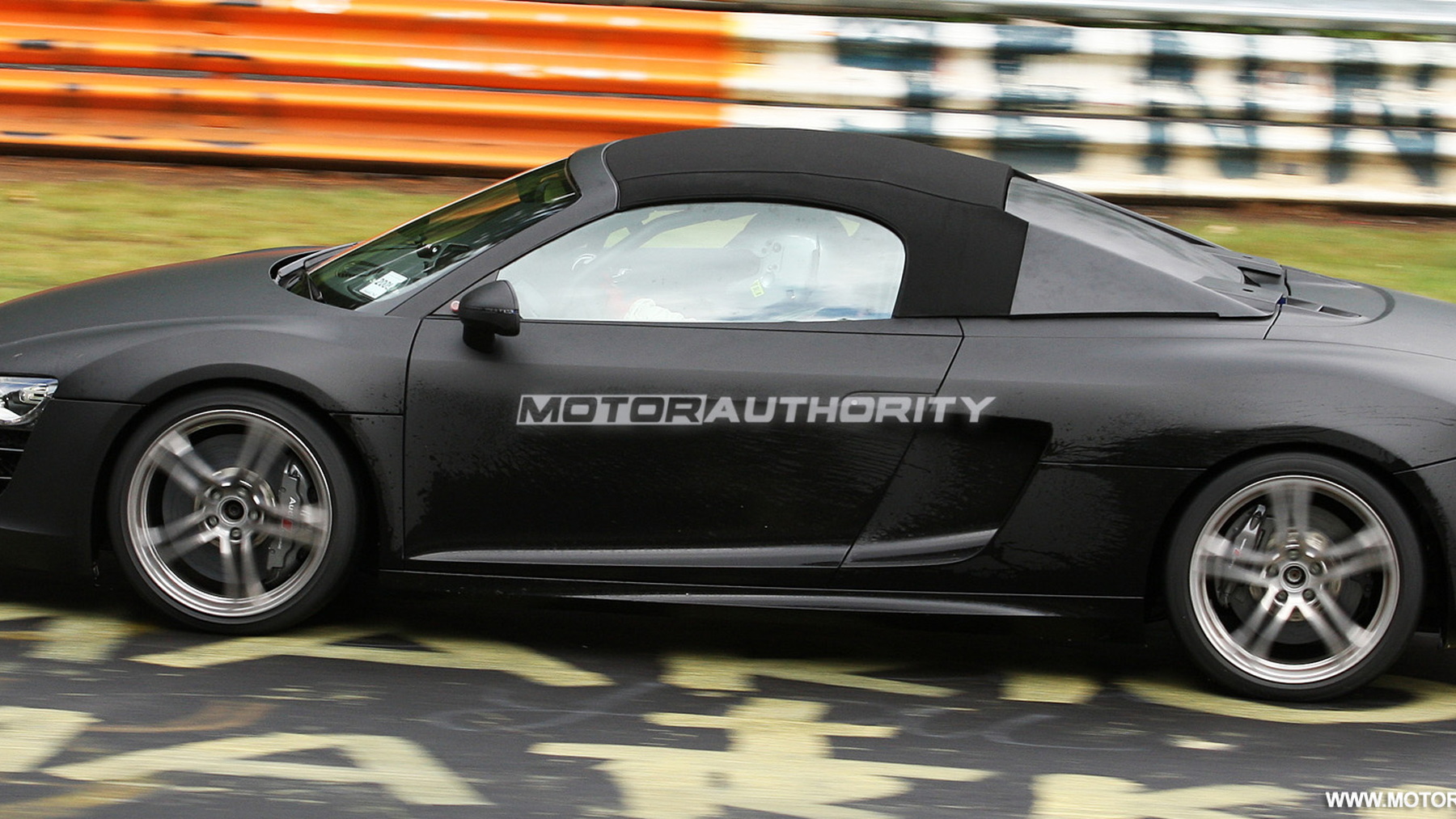 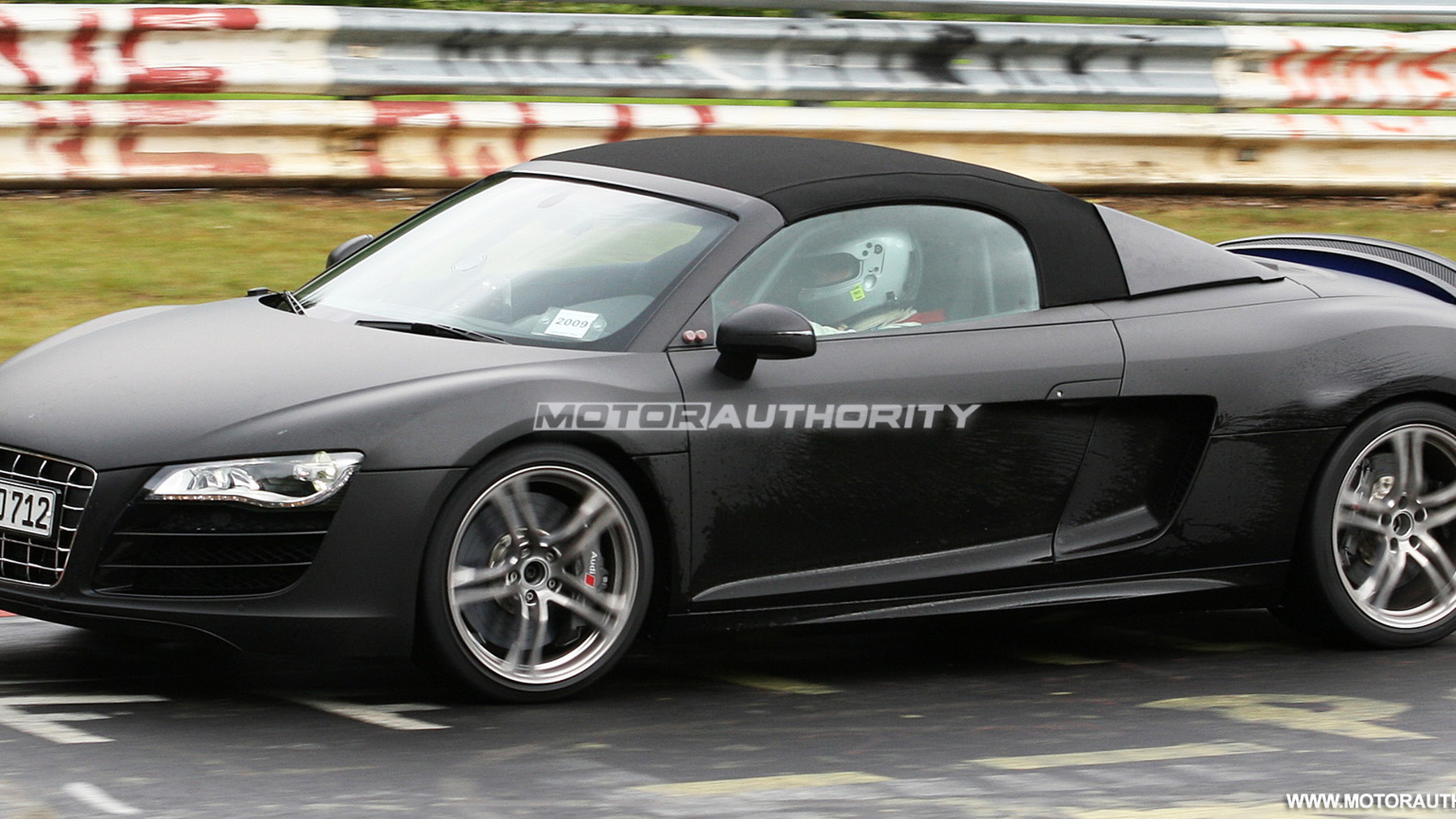 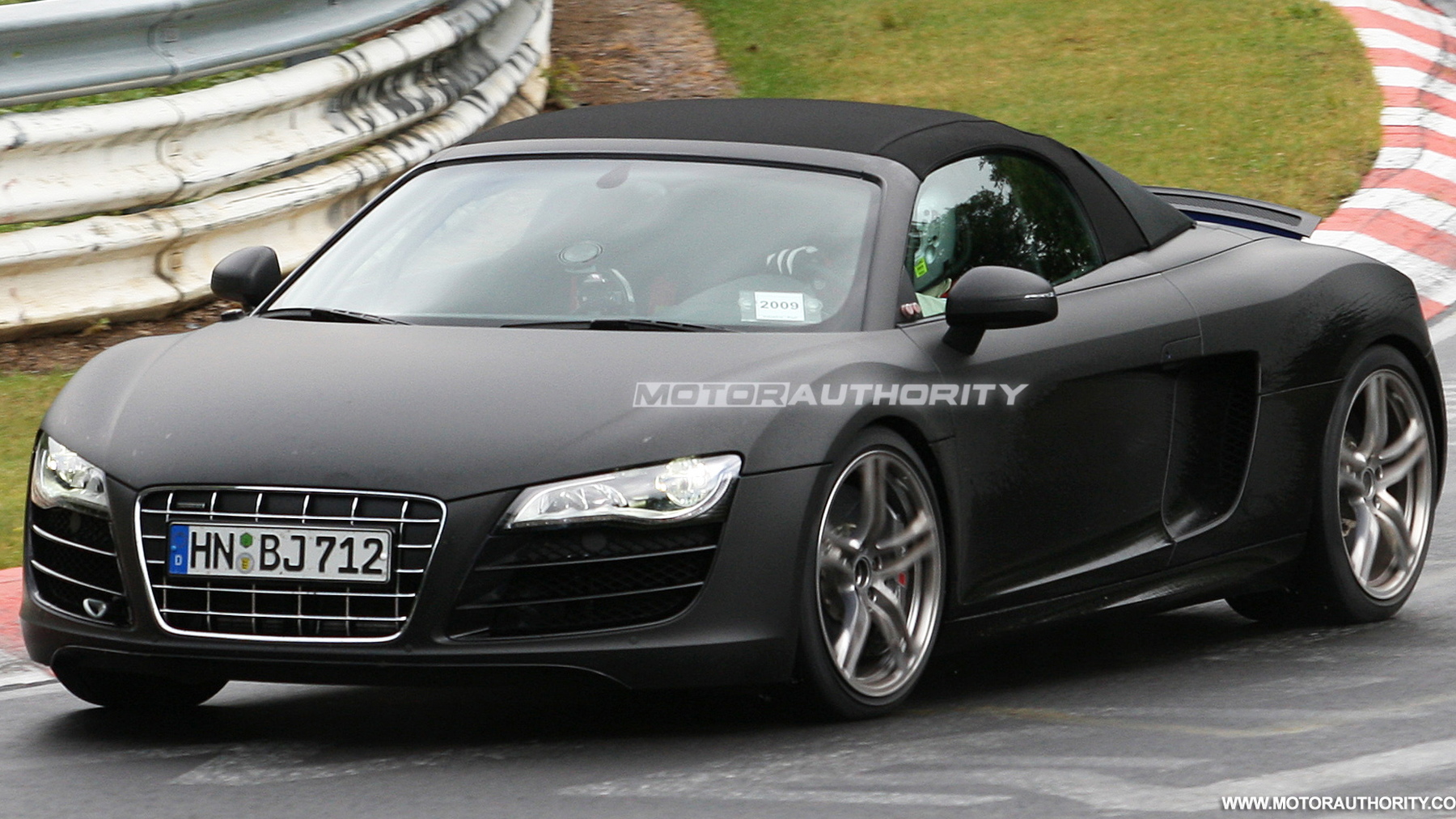 19
photos
Audi currently sells two versions of its R8 supercar, the original 4.2L V8 model and the recently revealed 5.2L V10 version, but there are two more versions in the works, one of which will be unveiled at September’s Frankfurt Motor Show. The two new versions are the R8 Spyder convertible and high-performance RS variant.

As for the R8 Spyder, a spokesman for Audi previously confirmed that it has been delayed to allow time for sales of the V10 hard-top to eventually die down. The Audi rep also confirmed that the Spyder will feature a full convertible soft-top roof instead of a smaller targa set-up, which was the preferred choice of engineers back in Germany.

Other major changes for the car that are expected to make it to production will be additional air intakes located behind the seats, as well as a pair of safety roll-over bars. Sadly, the R8’s trademark aluminum side blades have been removed. The placement of the fuel filler cap will also be changed due to the missing rear pillars, while changes under the sheet metal will likely include extra chassis strengthening.

While the base model will likely stick with the hard-top’s 420hp (313kW) 4.2L V8 engine, there’s talk that Audi may shoehorn the 5.2L V10 into a mid-level model and reserve the 5.0L twin-turbo V10 from the RS6 for a high-performance RS-variant. The version spotted testing at the Nurburgring in these latest spy shots is thought to be the V10 model.

The differences between the RS-variant and the standard V8 and V10 model will extend beyond just horsepower outputs. The chassis has reportedly been modified to accommodate the extra power, gaining upgraded suspension, steering and braking systems. Its arrival isn't pegged until late 2010 or early 2011.

This year’s Frankfurt Motor Show will be very busy for Audi as the event is also expected to see the debut of the new A5 Sportback model, which you can read about by clicking here.