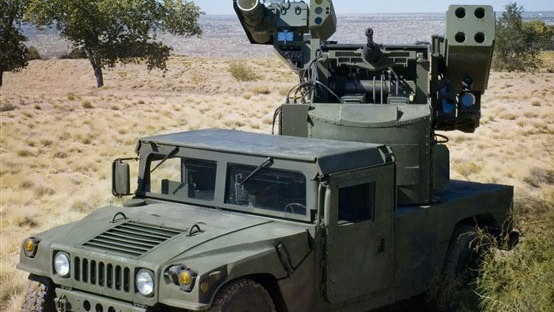 1
photos
Testing last month at White Sands Missile Range in New Mexico confirmed that a prototype weapons system consisting of a laser mounted on the back of an Avenger ground combat vehicle is capable of shooting down UAVs.

The first-ever successful demonstration of such a mobile laser weapon, which is dubbed the Laser Avenger, involved a 1kW laser system that's been adapted to track flying objects in complex situations. Shooting down UAVs will be increasingly important, as already the high-tech drones are becoming a serious threat on the modern battlefield.

But why laser guns - aside from the obvious 'cool factor', that is? The advantages to a laser-based system over conventional weapons are numerous, but primary among them is stealth.

"Laser Avenger, unlike a conventional weapon, can fire its laser beam without creating missile exhaust or gun flashes that would reveal its position," said Gary Fitzmire, vice president and director of Boeing Directed Energy Systems, the company behind the laser itself. "As a result, Laser Avenger can neutralize these UAV threats while keeping our troops safe."

The mobile laser cannon system is itself based on a fixed-position unit used for safely detonating unexploded ordnance and improvised explosive devices. For the Humvee-carried application, the laser's power was doubled, the system was ruggedized, then fitted with a tracking and aiming system and integrated into a package that could easily be carried by a military Humvee.

All of the conventional weaponry of the standard Avenger aerial defense vehicle is also fitted to the Laser Avenger, making it a formidable fighting machine even without the futuristic laser cannon.