';
BMW has officially introduced the world’s first hydrogen powered production car to the market. The car of choice is BMW’s luxury seven-seater saloon and will be built in limited numbers for select customers in key US and European markets. To overcome the obvious problem of the lack of hydrogen fueling stations, BMW’s Hydrogen 7 is capable of running on both hydrogen and regular gasoline.

Benefits of the car include the reduction in greenhouse gas emissions, particularly CO2. When running on hydrogen fuel, which has virtually infinite supplies, the BMW Hydrogen 7 emits only vapor. The move towards hydrogen powered cars running internal combustion engines is in stark contrast to the direction US car makers are taking with fuel cell technology and the hybrid direction that the Japanese are taking. BMW sees clean performance diesel cars and hi-tech hybrid systems as the way forward, and we have to agree with them. The amount of time and expense that’s required to develop sustainable fuel cell technology is simply not worth the effort when there are other technologies already working. 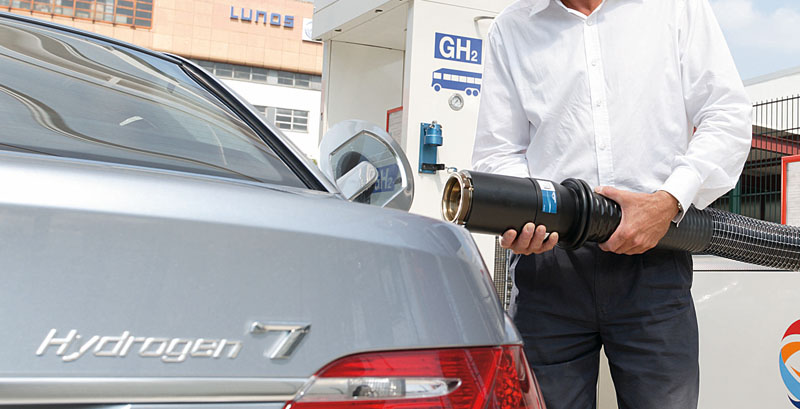 Just look at the BMW Hydrogen 7. Using hydrogen, the V12 develops 260hp and propels the big limo from 0-62 in 9.5s all the way to the electronically controlled top speed of 143mph. When using both fuels, the vehicles range is over 400 miles – 125 miles on pure hydrogen. The car comes with all the usual amenities you’d expect from a top of the line BMW including heated seats and quality materials within. BMW will produce a fleet of hydrogen capable 7-series limousines, which will go on sale early next year and is currently testing the vehicle on German roads. BMW is not alone in the promotion of hydrogen as a sustainable fuel. Mazda has been showcasing its talents with a hydrogen powered RX-8, but there are no production plans for this one.

Munich/Los Angeles, CA - September 12, 2006... BMW today announced the introduction of the new BMW Hydrogen 7, the world's first hydrogen-drive luxury performance automobile for everyday use. The car - a vehicle that has undergone the regular Product Development Process - will be built in a limited series and deployed to selected users in the U.S. and other countries in 2007. It is equipped with an internal combustion engine capable of running either on hydrogen or on gasoline and based on the BMW 7 Series.

Hydrogen technology dramatically reduces emissions generated by personal transport and, in particular, minimizes the emission of CO2. Running in the hydrogen mode, the BMW Hydrogen 7 essentially emits nothing but vapor. And, unlike fossil fuels and traditional gasoline, hydrogen is available in virtually infinite supply. With the BMW Hydrogen 7, the BMW Group is laying down a marker for sustainable mobility. This car will play a pioneering role in driving forward hydrogen technologies. BMW has gained an excellent reputation for significantly reducing fuel consumption and CO2 emissions by using ultra efficient, yet very dynamic gasoline engines. Together with clean performance diesel cars and the technologically advanced hybrid systems currently under development within the BMW EfficientDynamics project, the BMW Group has a clear strategy for sustainable mobility with hydrogen as the ultimate solution.

With all the comforts and amenities of a non-hydrogen BMW 7 Series, the BMW Hydrogen 7 is powered by a 260 hp twelve-cylinder engine and accelerates from 0-62.1 mph in 9.5 seconds. Top speed is limited electronically to 143 mph. The BMW Hydrogen 7 also features a dual-mode power unit - controlled at the touch of a button - that can switch quickly and conveniently from hydrogen to conventional premium gasoline.

The car's dual-mode drive provides an overall cruising range of more than 400 miles and enables the driver of a BMW Hydrogen 7 to enjoy virtually unlimited mobility, even when far away from the nearest hydrogen filling station. This technology is a viable solution until the hydrogen infrastructure is fully developed.

BMW CleanEnergy: paving the way into the future.

The BMW Hydrogen 7 perfectly captures the essence of the BMW CleanEnergy strategy. By using hydrogen produced from water and renewable energy, such as wind, sun or hydropower, in an internal combustion engine, the car's emissions are essentially nothing but vapor. And, with this emitted water vapor, the cycle can start again and the dream of sustainable mobility without using fossil fuel resources and without impacting the earth's climate can become a reality. The complete change from a fossil fuel infrastructure to a hydrogen economy will require decades, but with the Hydrogen 7, BMW shows that bringing hydrogen technology to the road is indeed feasible.

The BMW Hydrogen 7 has successfully completed the entire Product Development Process (PDP) obligatory for all new BMWs. In this process, all components of the new technology were integrated into the overall vehicle according to the same challenging criteria applied to "regular" production cars. The BMW Hydrogen 7 is not a hand made concept car, but rather, a milestone in industrializing hydrogen technologies for automotive use.

The knowledge gained in the PDP has not only made a decisive contribution to the everyday driving qualities of the BMW Hydrogen 7, but it will also significantly impact the development and production of future hydrogen car concepts, with the principle of dual-mode drive and the features of other components now going through the strict test of everyday driving practice.

While cruising range is a significant consideration to consumers in any car, BMW recognizes that it is of critical importance in a hydrogen-powered vehicle, because there is not yet a full network of hydrogen filling stations in the United States.

For precisely this reason, the BMW Hydrogen 7 features dual-mode drive technology and a combustion engine capable of running on both hydrogen and gasoline. The cruising range in the hydrogen mode is more than 125 miles, with another 300 miles in the gasoline mode. Thus, the driver of a BMW Hydrogen 7 is able to use the vehicle without problem even when the nearest hydrogen filling station is far away.

The BMW Hydrogen 7 clearly proves that liquid hydrogen may by all means be used as a source of energy for the production car. By introducing the BMW Hydrogen 7, the BMW Group establishes powerful momentum for the ongoing development of a supply infrastructure serving above all to set up additional hydrogen filling stations providing sustained mobility on a broad basis also in the future.

To offer the longest conceivable cruising range, the BMW Hydrogen 7 comes with both a conventional 74-litre (16.3 Imp gal) gasoline tank and an additional fuel tank taking up approximately 8 kilos or 17.6 lb of liquid hydrogen. Stored in a high tech tank, liquid hydrogen offers significant advantages in energy density enhancing the cruising range of the hydrogen car.

The driver is able to switch from hydrogen to gasoline mode manually by pressing a button on the multifunction steering wheel. Because engine power and torque remain exactly the same regardless of the mode of operation, switching from one mode to another has no effect on the driving behavior and performance of the BMW Hydrogen 7.

The control system in BMW Hydrogen 7 gives priority to the use of hydrogen. And, should one of the two types of fuel be fully consumed, the system will automatically switch over to the other type of fuel in the interest of secure, ongoing supply.

The BMW Hydrogen 7 is a four-seater with the two passengers at the rear enjoying the same high standard of comfort in the world's first hydrogen car developed for everyday use as in one of BMW's "regular" luxury performance vehicles.

The BMW Hydrogen 7 comes with an unusually wide range of standard features. In addition to the high level of equipment featured from the start in the BMW 760i, the BMW Hydrogen 7 comes inter alia with climate comfort composite glazing, BMW's high-end automatic air conditioning, auxiliary heating, electric seat heating for the driver, front passenger and rear seats, lumbar supports, electric seat adjustment with memory function on the front seats, ISOFIX child seat fastenings, Park Distance Control, a rain sensor, exterior and interior mirrors with automatic anti-dazzle, Soft Close Automatic for the doors and a headlight assistant. A complete entertainment and communication package adds to the comfort a BMW 7 Series can provide.

BMW Hydrogen 7 emphatically proves that changing over to an alternative form of energy doesn't mean missing out on superior driving dynamics and comfort. The departure from fossil fuel does not in any way mean giving up the dynamics and performance typical of a BMW. Mobility of tomorrow and driving pleasure of today are compatible, with the drive concept of BMW Hydrogen 7 being directly transferable to future models. Driving a car of this caliber will be just as thrilling in the future as it is today, but at the same time cleaner than ever before.

BMW Group: "Sustainability. It can be done."

Sustainable action and corporate success belong together. With this clear commitment, the BMW Group has integrated sustainability as part of its corporate strategy for many years and takes responsibility for its products throughout their entire life cycle - from production to end-of-life recycling. The BMW CleanEnergy strategy aims to create a sustainable future for individual mobility independent of fossil fuels. With BMW EfficientDynamics, the company enhances fuel economy with every new product while still offering the customer the best in class performance.

With recycling-optimized product design and life cycle assessment, BMW reduces the impact on the environment. The use of benchmark technologies in its clean production program significantly reduces the consumption of water and energy during the production process. There are many examples of the advantages of adhering to BMW's mantra, "Sustainability. It can be done." The benefits are enjoyed by not only the company and its associates, but also the environment and, most importantly, the customer. To learn more about BMW Group and sustainability, please visit www.bmwgroup.com/sustainability.