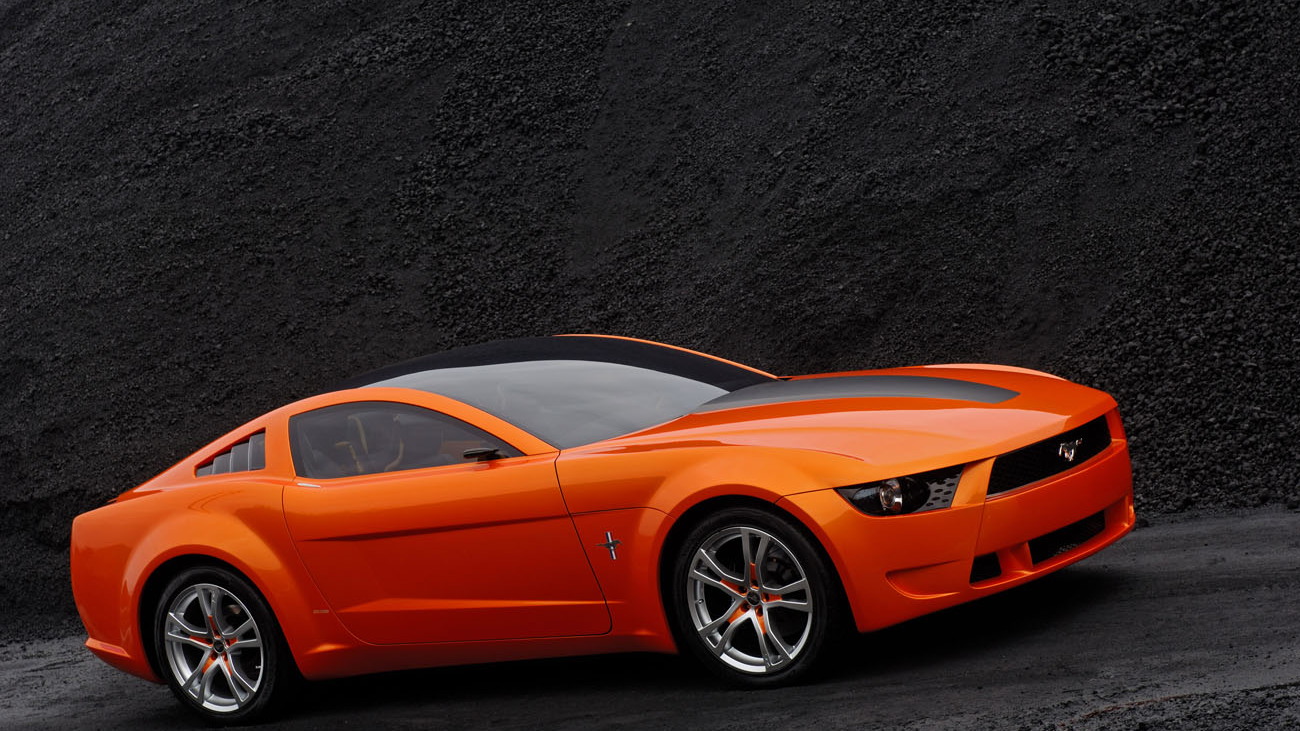 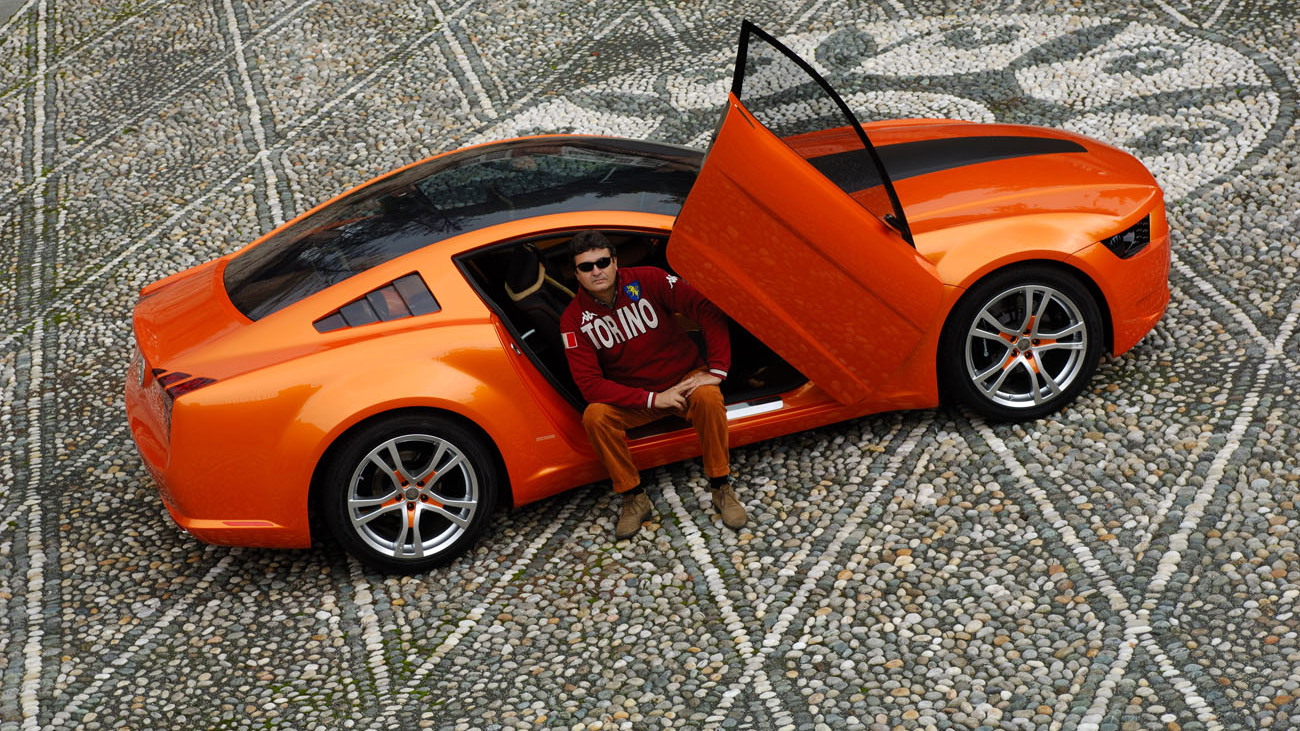 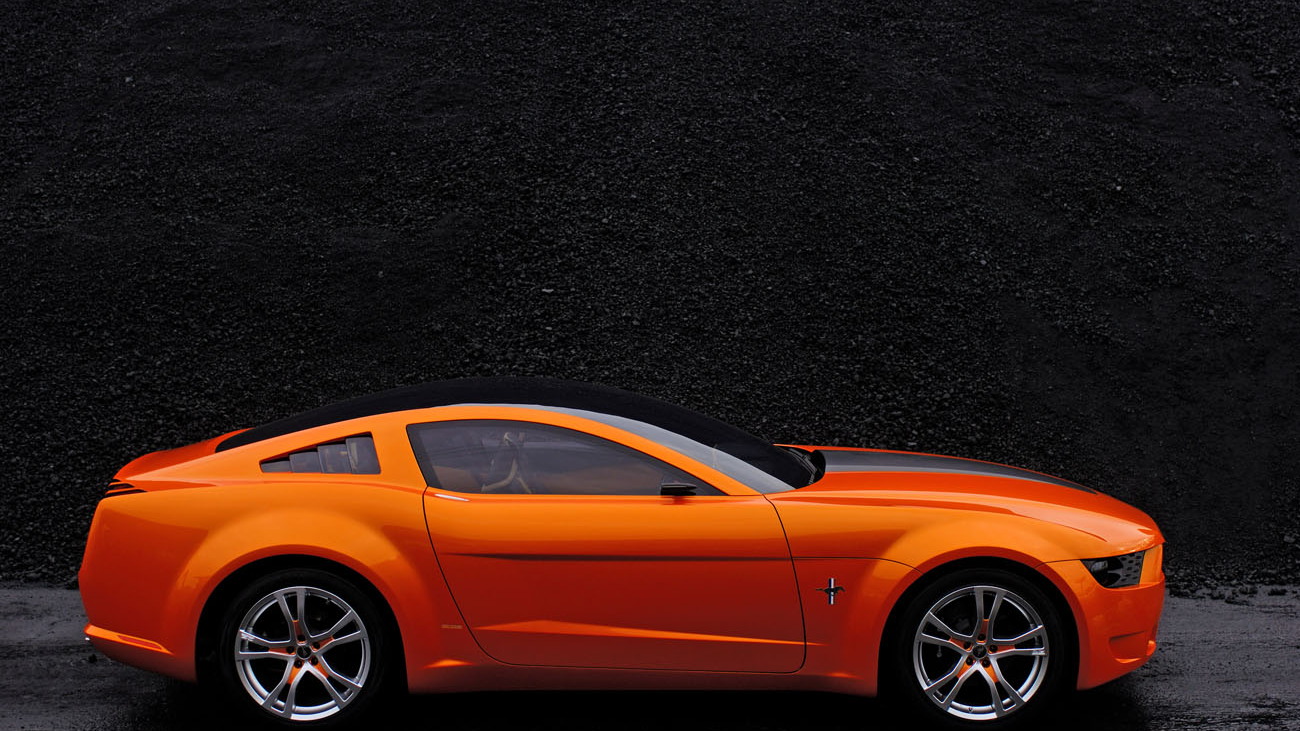 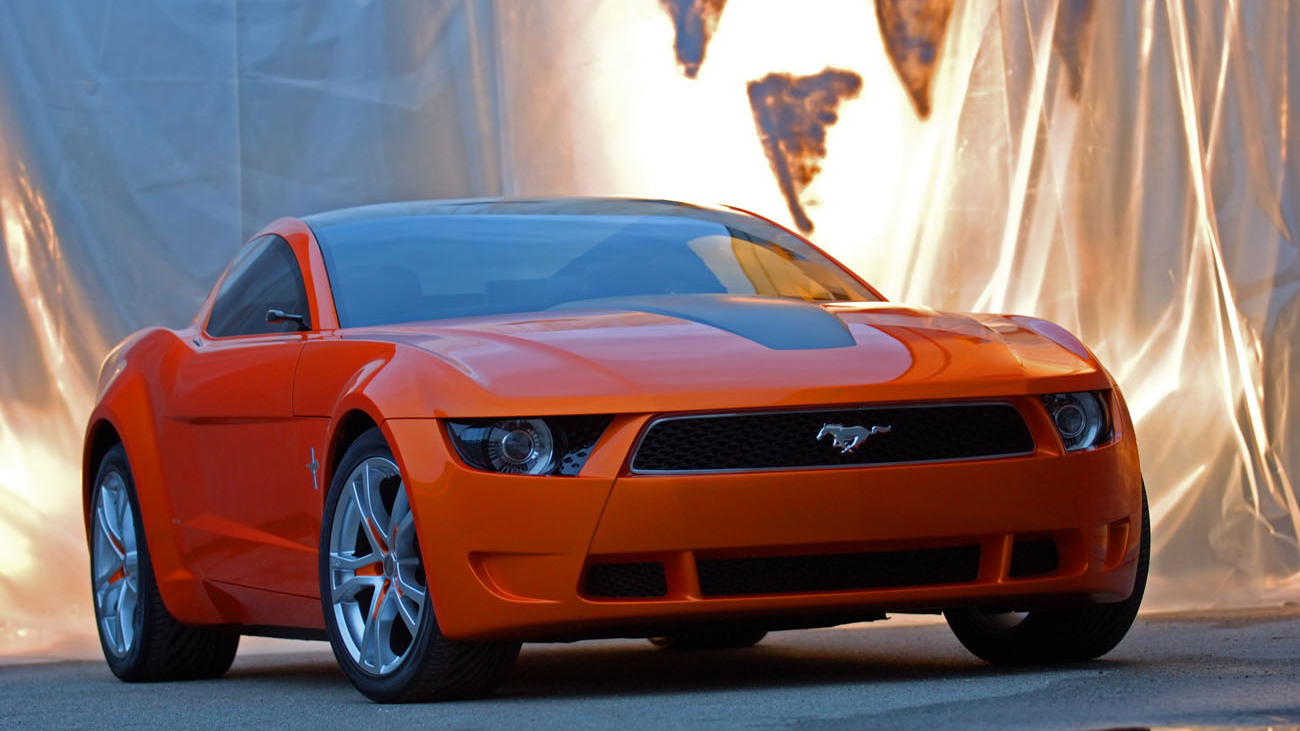 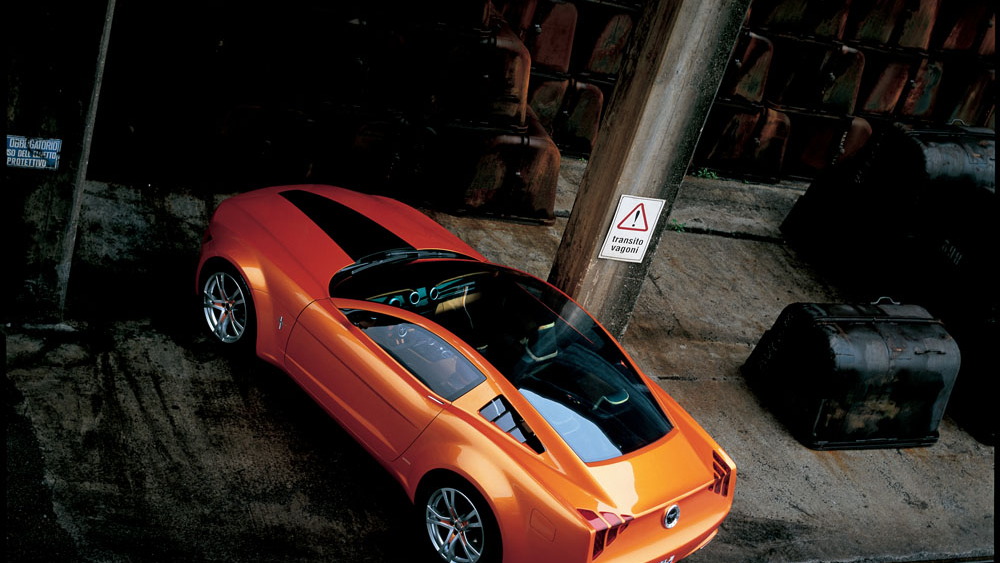 20
photos
Fabrizio Giugiaro of Italy’s Italdesign studio fell in love with the new Mustang when he first laid eyes upon it. He was so taken with its classic styling and muscular appearance that he contacted Ford’s VP of design, J Mays, in early 2005 to talk about doing an Italian job of the car built-up with Ford’s own racing technologies.

"When we saw the new Mustang, we knew two things: It was the best we'd seen since the original, and we had to get our hands on one," said Giugiaro. The car will mark the Italian coachbuilder's first reveal at the L.A. Auto Show this week, and is said to have included the legendary Giorgetto Giugairo in the design work.

The Mustang by Giugiaro concept was fully developed in the family run studio in Turin, Italy. It’s powered by a supercharged version of the 4.6L 3-valve V8 from the Mustang GT and delivers an estimated 500hp. The suspension has also been upgraded with new Dynamic-tuned dampers, lowered springs and anti-sway bars that ride on 20in wheels with 275mm tires at the front and huge 315mm rubber at the rear. Now all Ford has to do is remove the “Brokeback Mountain” interior and actually build the damn thing.

Click ahead for our high-res gallery and the official press release.

Los Angeles, Nov. 28, 2006 – The 2005 Ford Mustang captured the hearts and minds of millions of fans and future owners when the all-new model debuted. But the proportions and design of Ford's first purpose-built muscle car in 30-plus years caught the eyes and sparked the imaginations of a pair of the world's leading coachbuilders in Italy as well.

"When we saw the new Mustang, we knew two things: It was the best we'd seen since the original, and we had to get our hands on one," said Fabrizio Giugiaro, styling director of Italdesign – Giugiaro S.P.A. "We still believe it's important to show the automotive world pure exercises in style that interpret key models reflecting the history and image of important brands."

"It seemed only fitting," said Mays. "This design study reinforces the global appeal of Mustang, yet it's right at home in L.A. – America's most enthusiastic performance and muscle car market. Plus, design icon Giorgetto Giugairo's offer to work his magic on Mustang alongside his son underscores the timelessness allure of Ford's most iconic car."

Design aficionados will remember that the senior Giugiaro – who last year celebrated his 50 th anniversary in the business by designing a custom-made Ferrari, the GG50 – created the 1965 Bertone Mustang. The car, which was unmistakably Italian in its interpretation, became the first European-styled car to make its international debut in America following the end of

The senior Giugiaro's portfolio includes concept and production designs for nearly every automaker in the world – from Fiat, Alfa Romeo and Volkswagen to Mazda, Lotus and Bugatti. Since joining ItalDesign, the family firm, in 1990, Fabrizio Giugiaro has helped deliver key global designs as well, but American automotive icons have long captured his attention.

He designed the Chevrolet Corvette Moray, unveiled in early 2003, and was eager to expand the collection of Giugiaro-interpreted American metal.

Fabrizio Giugiaro led the 2-D design process on the Mustang by Giugiaro concept, allowing him to deliver a complete exterior model from the family's Turin, Italy, studios in just four months.

Visually, the Mustang by Giugiaro appears more compact than the production car, thanks to a reduction of the rear overhang and a signature Giugiaro "trick" of tapering the angles on the car to the limit of its mechanical outlines.

Still, the Italian version of America's most popular muscle car hasn't lost any of its swagger.

The vibrant orange concept is wider than the production version. The Giugiaros added 30 millimeters to the front, gradually expanding the width by a full 80 millimeters toward the rear, which is typical in Italian design.

With its longer hood and the trunk barely visible, the car looks more of a fastback in side view. But details throughout reinforce the freedom and rebellion synonymous with Mustang. Fabrizio Giugiaro's favorites include:

* The interior – featuring a dramatic instrument panel that sweeps the width of the car; circular gauges that project from behind the steering wheel; dark brown horsehide-covered headrests with horse logo accents; and seat cushions and backrests elaborately upholstered in dark brown mottled horse hides.

* The single curved glass panel that bridges the windshield and rear window, serving as the concept's roof. Produced by Solutia of Detroit, the panel is made from a special type of crystal that filters out 100 percent of UVA rays while providing unfettered vista views.

* Its dramatic doors, which are hinged at the base of the upright A-pillar and open vertically at the touch of a button.

* Bespoke taillights, which are three separate elements as found on the 1964 Mustang – but reinterpreted into a more dramatic arrow shape that links to the louver panels that replace the rear side windows.

* The visible curl that sweeps into the crest of the concept's carbon fiber fenders, hinting at tail fins that defined American cars of the '50s.

As its wheels and tires suggest, the Mustang by Giugiaro is more than just a tribute to Mustang design. It also is an exclamation of the car's heritage of performance.

The concept features a powertrain and chassis enhanced in conjunction with Ford Racing – which is responsible for Ford Motor Company motorsports development and operations.

Ford Racing's efforts include the development and sale of a race-prepared version of the Mustang, called the FR500C, for the Grand-Am KONI Challenge Series. In its first season alone, the FR500C scored five wins in the 2005 GS Class, including the manufacturers' championship, in which Mustang bested other production-based sports cars, including the BMW M3 and Porsche 911.

This Mustang, a turn-key race car sold to privateers, provided the inspiration for the Mustang by Giugiaro concept's performance and handling attributes.

Ford Racing improved on the already-robust 300 horsepower all-aluminum 4.6-liter 3-valve V-8 engine in the production Mustang GT by adding an intercooled twin-screw supercharger for the new concept. Additional improvements include fuel injectors from the Ford GT and a unique engine calibration. Engine air intake is increased with a larger 95 mm mass air meter and a conical air filter. Exhaust performance is enhanced with new Ford Racing mufflers and an X-pipe.

Under the car, the FR500C-inspired chassis tuning is accomplished with a tailored Ford Racing Handling Pack. This package, available through Ford Racing for the Mustang GT, adds new Dynamic-tuned dampers, lowering springs and anti-sway bars. The changes give the car a lower stance while sharpening handling response. The car rides approximately 1.5 inches lower than the production Mustang GT.

"The Mustang by Giugiaro drives as good as it looks," said Fabrizio Giugiaro. "After taking it to the limits on streets outside of Turin, I can honestly say this car was well worth the 30,000 hours of blood, sweat and tears that we invested to create a modern performance classic."