Seat will unveil a new SUV concept vehicle at next week’s Frankfurt Motor Show said to signal a new design theme for the Spanish carmaker. Called the Tribu, the new concept car only features two doors but is still expected to enter production by 2009. It will be joining the Altea Freetrack as the second SUV model in the carmaker's lineup and is the first Seat model penned by former Lamborghini designer Luc Donckerwolke.

The new Tribu shares its mechanicals with parent company Volkswagen’s upcoming Tiguan but is much smaller in size. Despite its smaller stature, the Tribu still boasts considerable ground clearance and features oddities such as a crystal lined door insert.

Beyond the Tribu, Seat is planning to unveil its all-new Ibiza hatch at next year’s Geneva Motor Show. The new model will built of VW Group’s new small car platform, which will also spawn the next-gen Polo and Skoda Fabia models.

More pics after the jump. 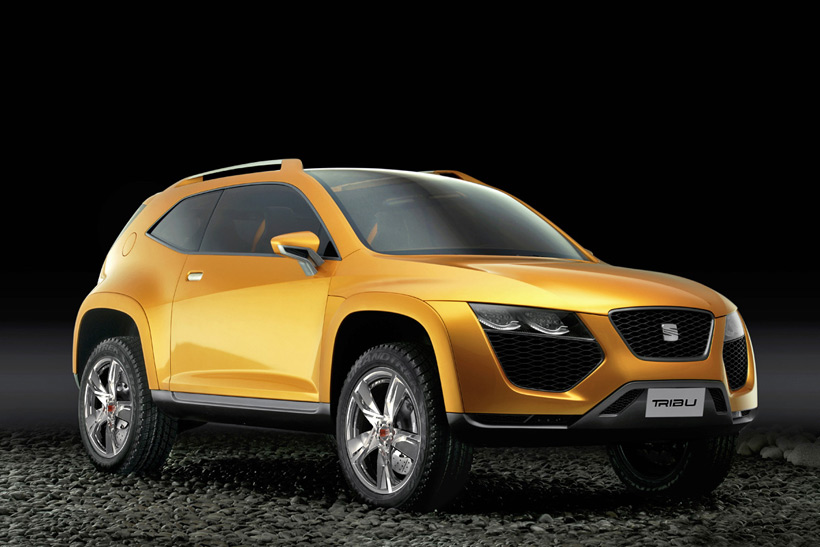 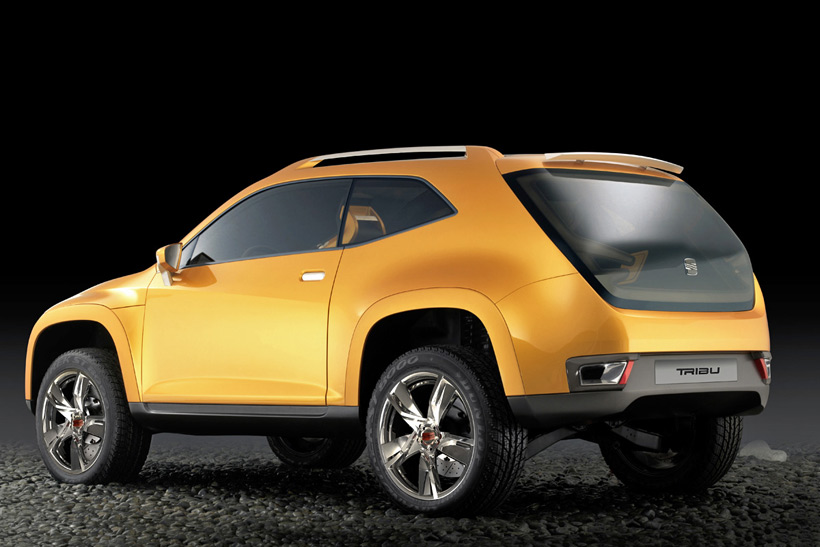 SEAT has delivered the surprise of this year’s Frankfurt Motor Show, with the unveiling of the dramatic Tribu concept. This dynamic-looking compact SUV showcases the latest interpretation of ‘Auto Emoción’, and is the first model wholly designed by SEAT Design Director Luc Donckerwolke and his team since his arrival at the Spanish brand from Lamborghini.

The Tribu signals an evolution of SEAT’s current design themes. Elements of current SEAT aesthetics, such as a dynamic line on each flank and a bold grille, sustain the brand’s clear identity. However, aside from these trademarks, everything else is different, with a more angular silhouette that communicates power, confidence and dynamism.

As with the Salsa in 2000, this concept car heralds the advent of a new wave of SEAT models, and is therefore highly significant.

The SEAT Tribu is clearly an SUV, with its generous ground clearance and four-wheel drive system, but its compact, three-door shape and sports-car-like detailing – such as impactful 20-inch alloy wheels, prominent rear spoiler and the aforementioned dynamic lines – are proof of its feisty, sporty character.

The SEAT dynamic line is even more pronounced than on current models, such as the Leon and Altea. It begins at the front, like an eyebrow over the headlamp, and continues over the front wheel arch, sloping over the side towards the rear wheel.

Elsewhere, the Tribu showcases new design themes for SEAT. The trapezoidal shape of the headlamps, grille and air vents, and the new grille-mesh design with elongated hexagons, lend a powerful, assertive image to the newcomer.

Seen from the front, the striking windscreen extends past the compact bonnet over the top of the car, becoming a panoramic roof that allows light to flood the interior, while enhancing the view of the outside.

At the rear, the light clusters are deceptively absent. In fact, they are hidden from view behind the imposing glass hatch and are visible only when the bulbs illuminate.

The striking 20-inch alloy wheels, fitted with 255/50 tyres, are sure to garner plenty of attention. Laced with trapezoid shapes, these wheels echo the strong design themes found elsewhere both inside and outside the car.

Moving to the interior, the Tribu is a four-seater, whose front bucket seats feature integrated seatbelts. Additionally, both have independent heating circuits with vents at the back for rear seat heating.

The rear seats can be folded forward to increase load capacity, and are separated by a console that doubles as an armrest or cupholder, complete with a handy integrated storage compartment.

Within the dashboard, the Tribu has four screens, with a rev counter and a speedometer on two further dials to provide all the information needed for a safe, comfortable drive. Three of the screens display different information according to the driving mode selected – Urban, Sport or Freerun. These three driving modes can be chosen at the touch of a button, whereby SEAT’s new concept car modifies its parameters (engine management, suspension, gearbox, etc.) to adapt to different surroundings – city, motorway and off-road.

The Tribu concept can be seen in Hall 3 at the 63rd IAA Frankfurt Motor Show, which is open to the public from 13th to 23rd September 2007.