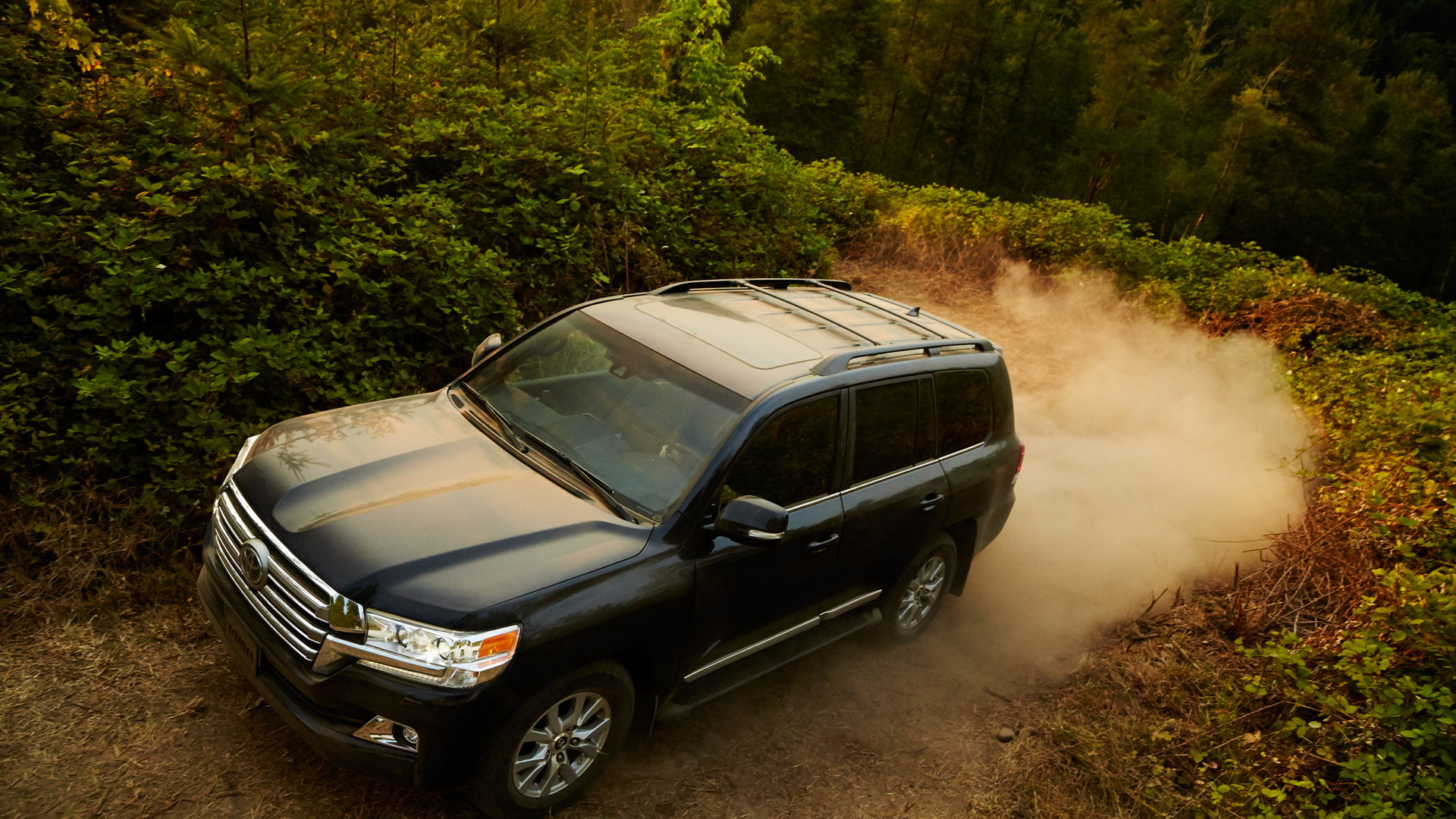 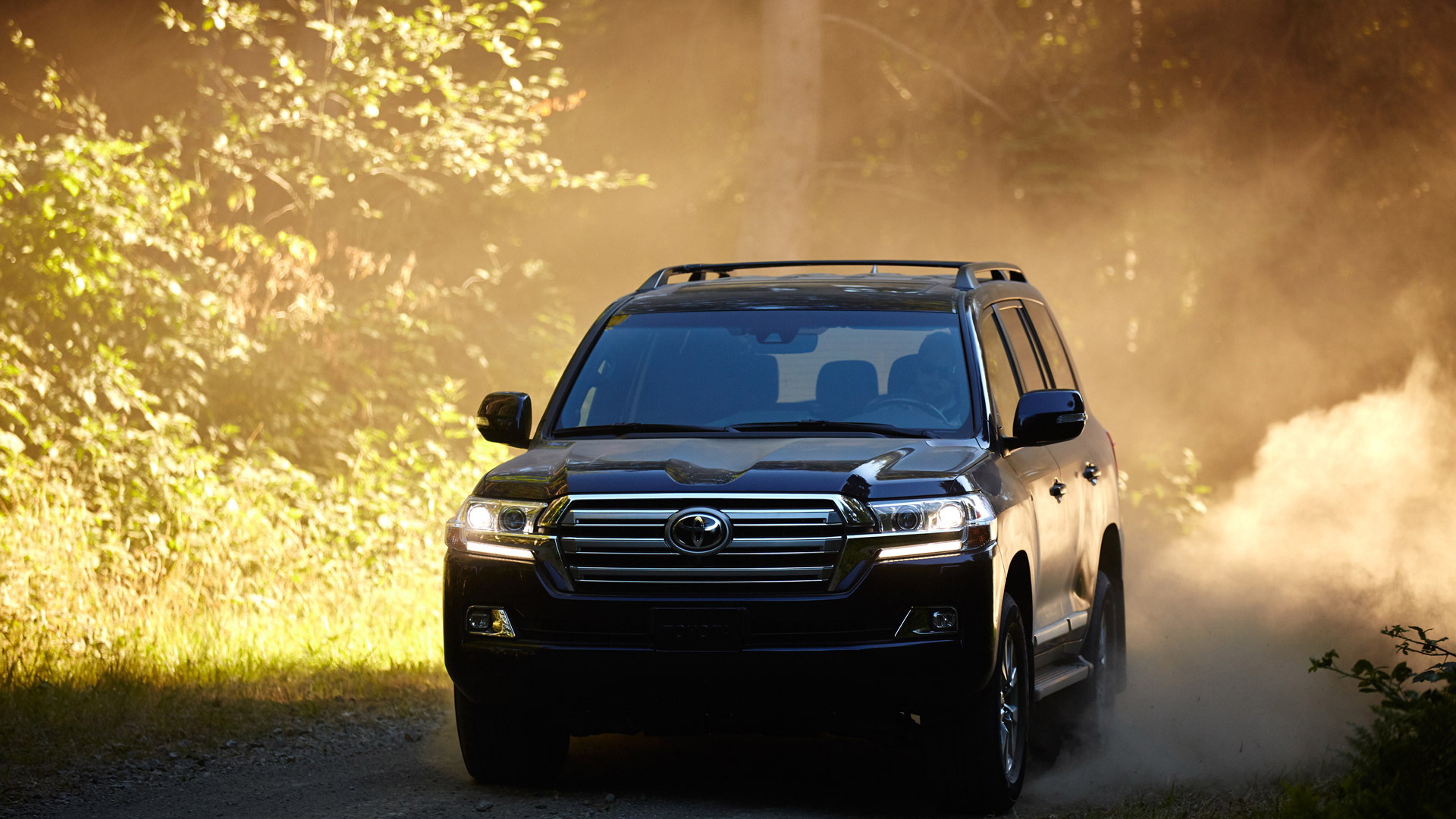 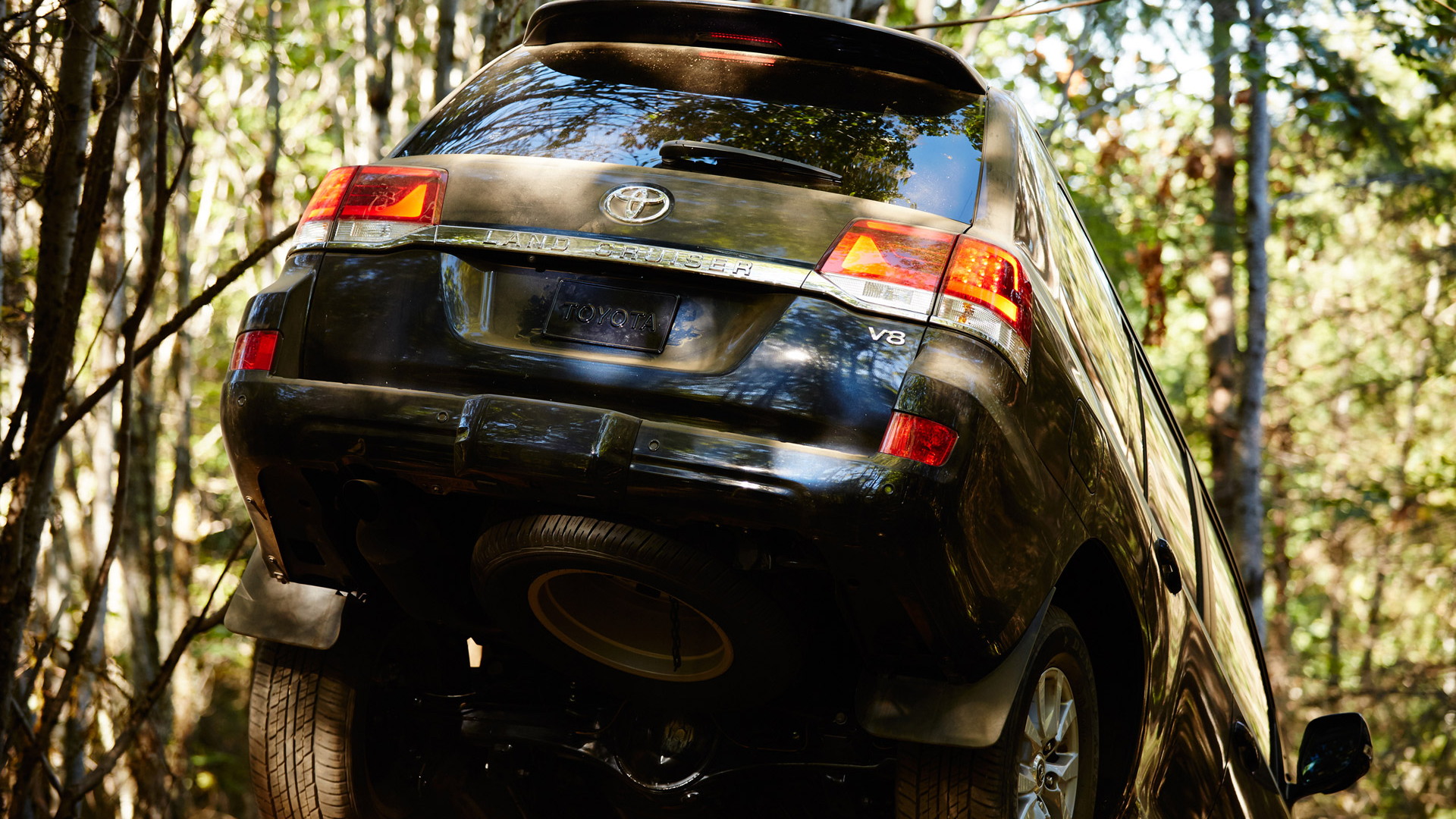 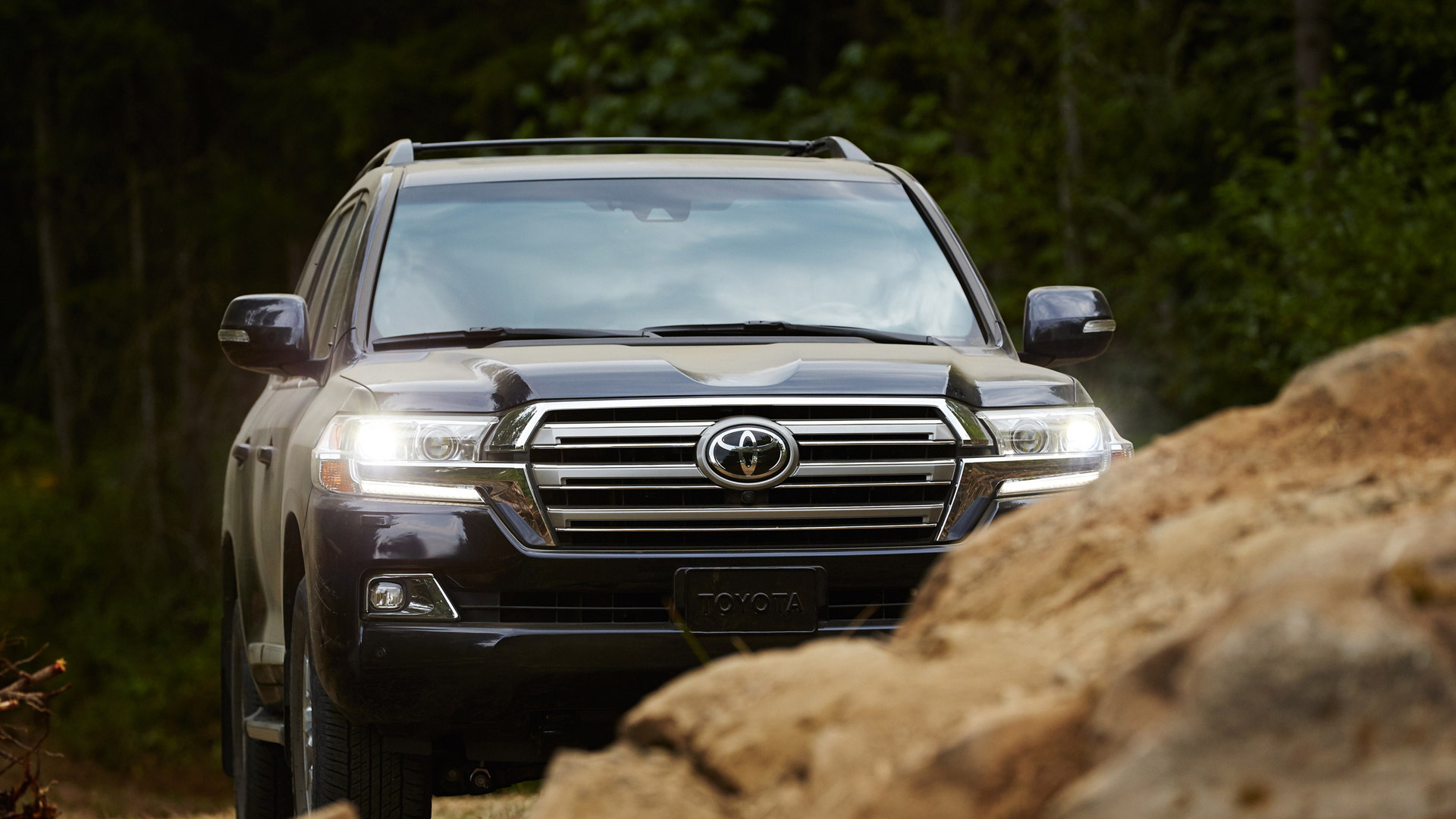 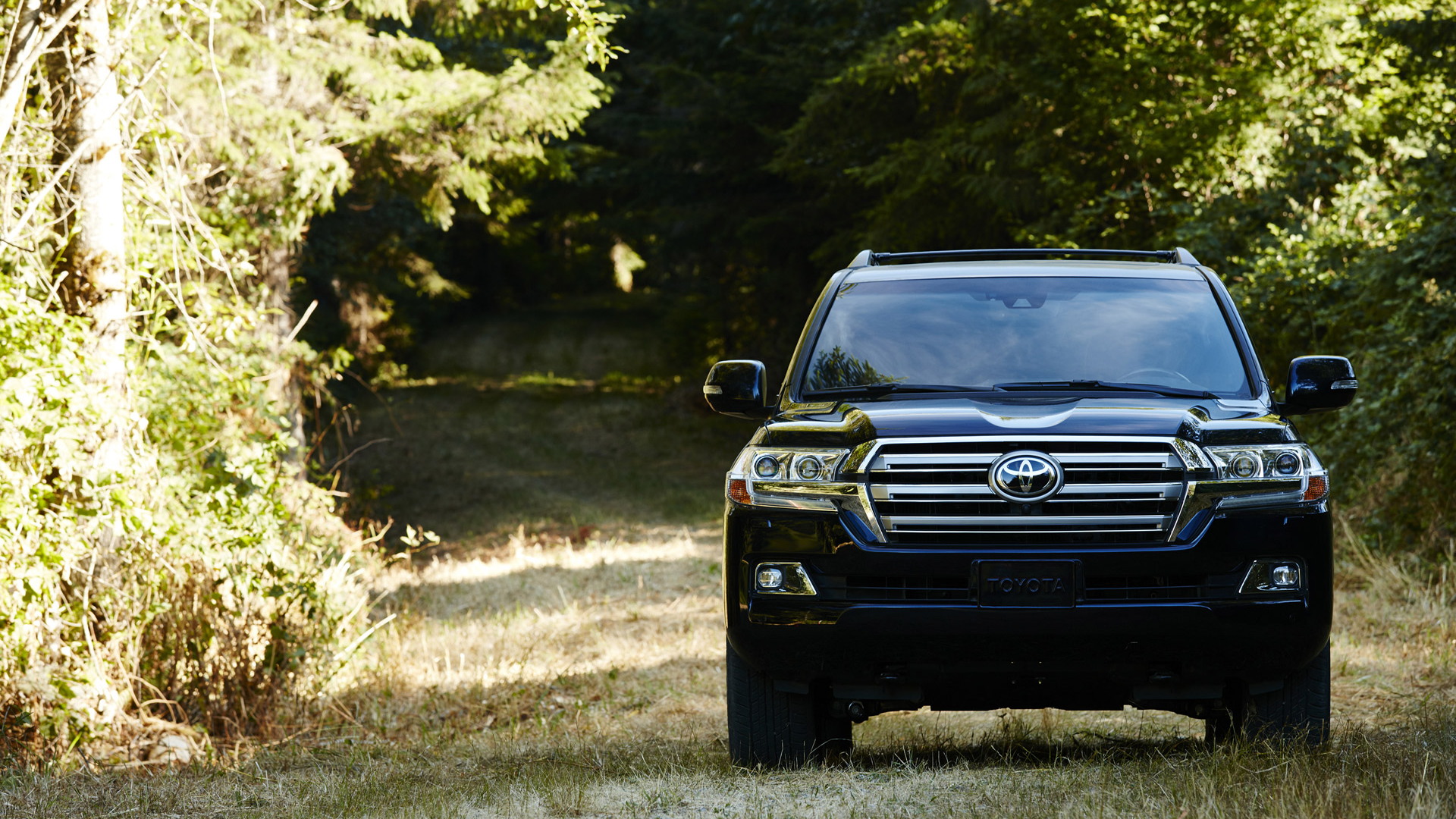 Yesterday we brought you a first look at the 2016 Toyota Land Cruiser. Now we have photos and details for the version headed to showrooms in the United States no later than the fall. The tough, go-anywhere Land Cruiser receives some significant updates for the 2016 model year, mirroring the changes made to the vehicle’s corporate cousin, the Lexus LX 570, which appeared in updated form for the first time during this past weekend’s Pebble Beach Concours d’Elegance.

New exterior and interior design features are the obvious changes made to the 2016 Land Cruiser, while new safety technology, a major drivetrain upgrade and enhanced multimedia features make this more than your typically mid-cycle update. Actually, this is the current 200 series model’s second update, with the previous being introduced for 2013. This will be the last such update before the big, body-on-frame SUV is completely redesigned in the next two to three years.

You’ll immediately notice the 2016 Land Cruiser by its new front end. Toyota says the grille, headlamps, bumper, fenders and hood are all new. These give the vehicle a more modern and aggressive look and feel. New lights have also been fitted to the rear, and the chrome strip now stretches the width of the vehicle.

Inside, the design team has added more soft-touch surfaces, new display screens, plus new switches and controls. The center stack was redesigned and now integrates a cooler box, USB port and cup holders, as well as 9.0-inch display screen, while a new 4.2-inch display has been added to the main instrument cluster. Some of the information shown in the display includes gear selection, odometer, tripmeter, fuel consumption, individual tire pressures and cruising range. A wireless phone charger and rear-seat entertainment system with dual 10.0-inch screens are also included.

In the United States, the 2016 Land Cruiser continues with the outgoing model’s sole V-8 option. The 5.7-liter V-8 is rated at 381 horsepower and 401 pound-feet of torque, with as much as 90 percent of the peak torque delivered from just 2,200 rpm—perfect for towing. The Land Cruiser’s standard Trailer Towing Package equips it to pull a trailer up to 8,500 pounds. The hardware needed for towing is all there, including an engine oil cooler, as well as a connector and sub-wiring harness that facilitate a trailer-brake controller. In addition, the Trailer Sway Control feature uses the vehicle’s electronic stability control to help counteract trailer sway.

The big news is the addition of an eight-speed automatic instead of the previous six-speeder. This makes the 2016 Land Cruiser the first Toyota in these parts to feature an eight-speed auto. The added ratios see a slight improvement in fuel economy, with the EPA-rated numbers coming in at 13/18 mpg city/highway and 15 mpg combined. Toyota says the transmission also improves acceleration.

The Land Cruiser’s full-time 4WD system uses a Torsen limited-slip locking center differential to distribute torque 40:60 front-to-rear. Should wheel slippage occur, the differential can direct more torque to the wheels with the best grip. Other systems helping with off-roading are a two-speed transfer case as well as electronic systems designed specifically for off-road conditions. One of these is the Multi-terrain Select system which allows more-than-normal wheel slip in loose terrain, such as mud and sand, to help the vehicle keep moving without digging itself in.

Once again, the Toyota Land Cruiser comes fully loaded and with seating for eight. The only options for buyers are color and trim. For 2016, new semi-aniline perforated leather is available in the choice of black or brown. This means you get all the latest Toyota safety features at no extra cost. Included is the latest Toyota Safety Sense-P suite of safety features and electronic driver aids, which includes pre-collision systems that aim to prevent or mitigate collisions and, under certain circumstances, help protect pedestrians in a collision.

Pricing for the 2016 Toyota Land Cruiser is yet to be announced but we wouldn’t expect much of a move from the previous model year’s price tag, which came in a tad over $80k.