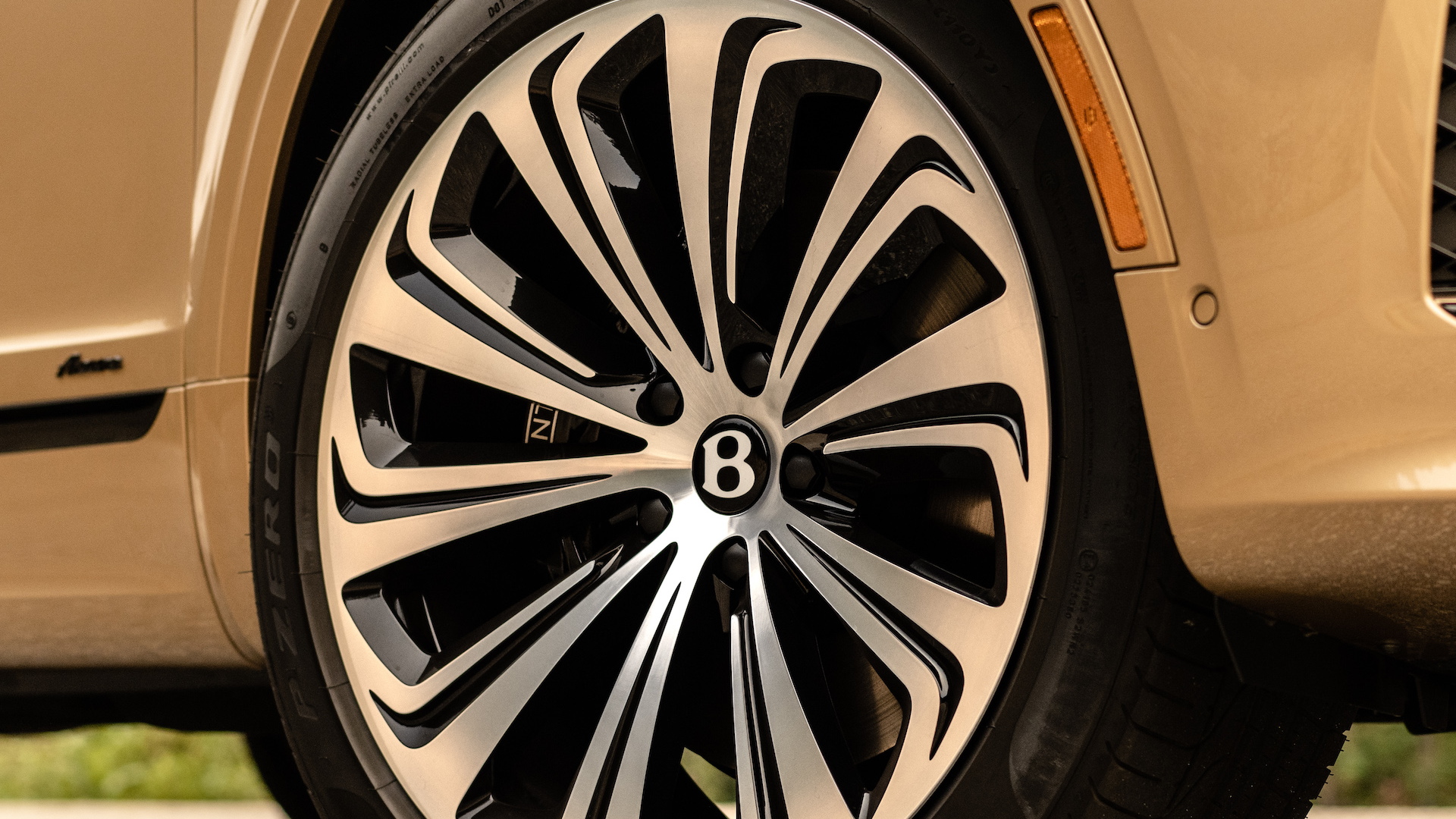 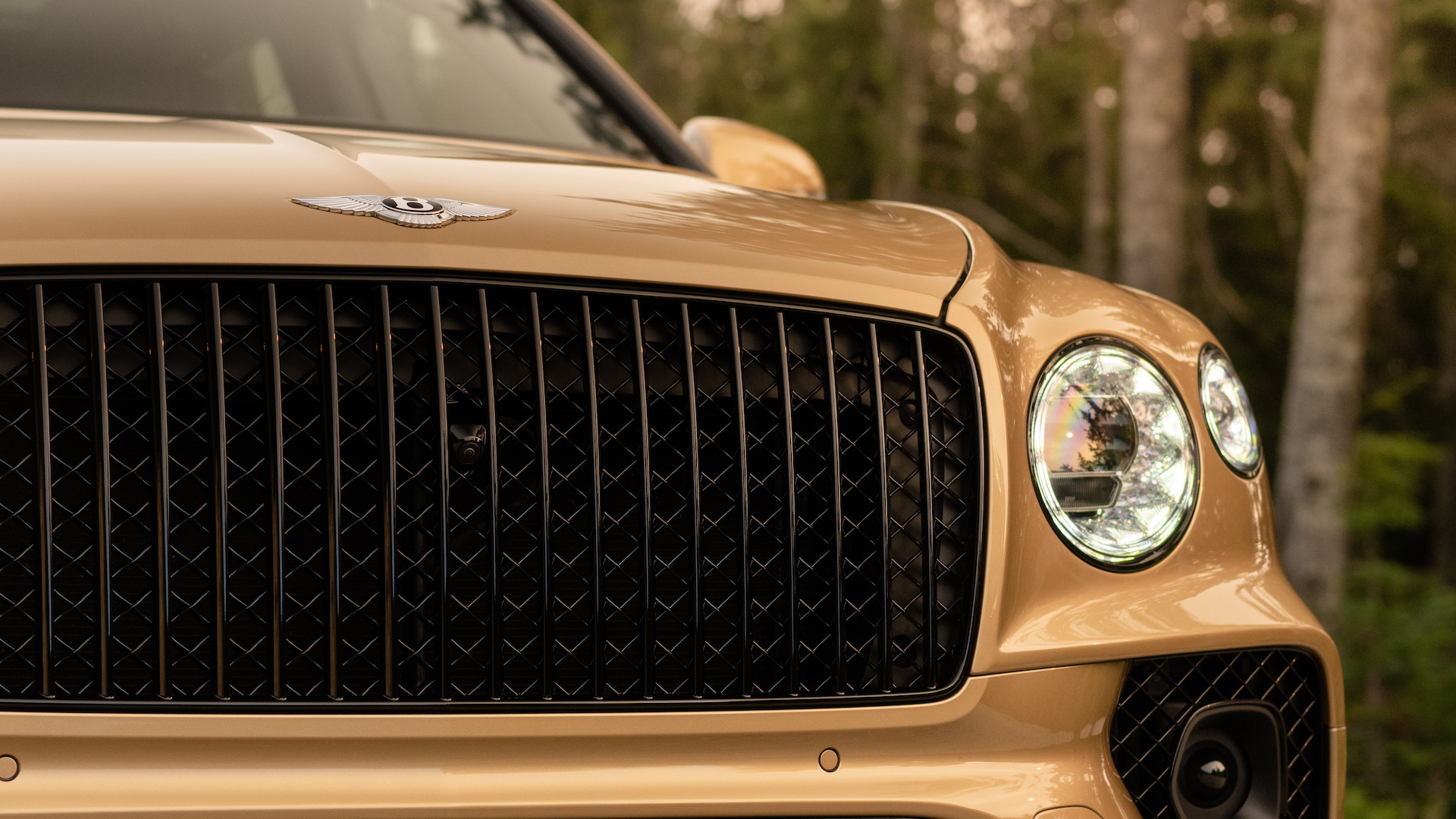 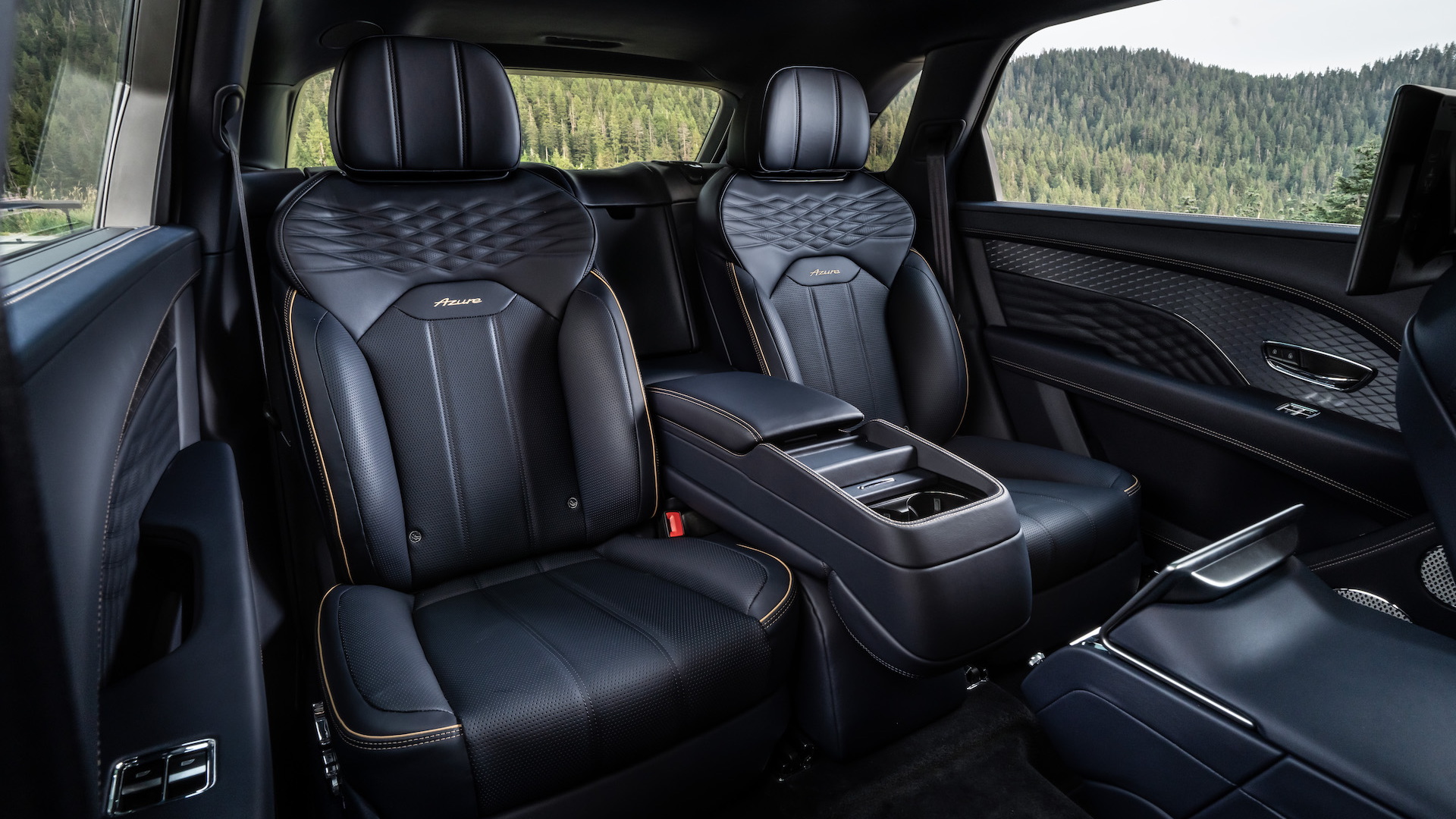 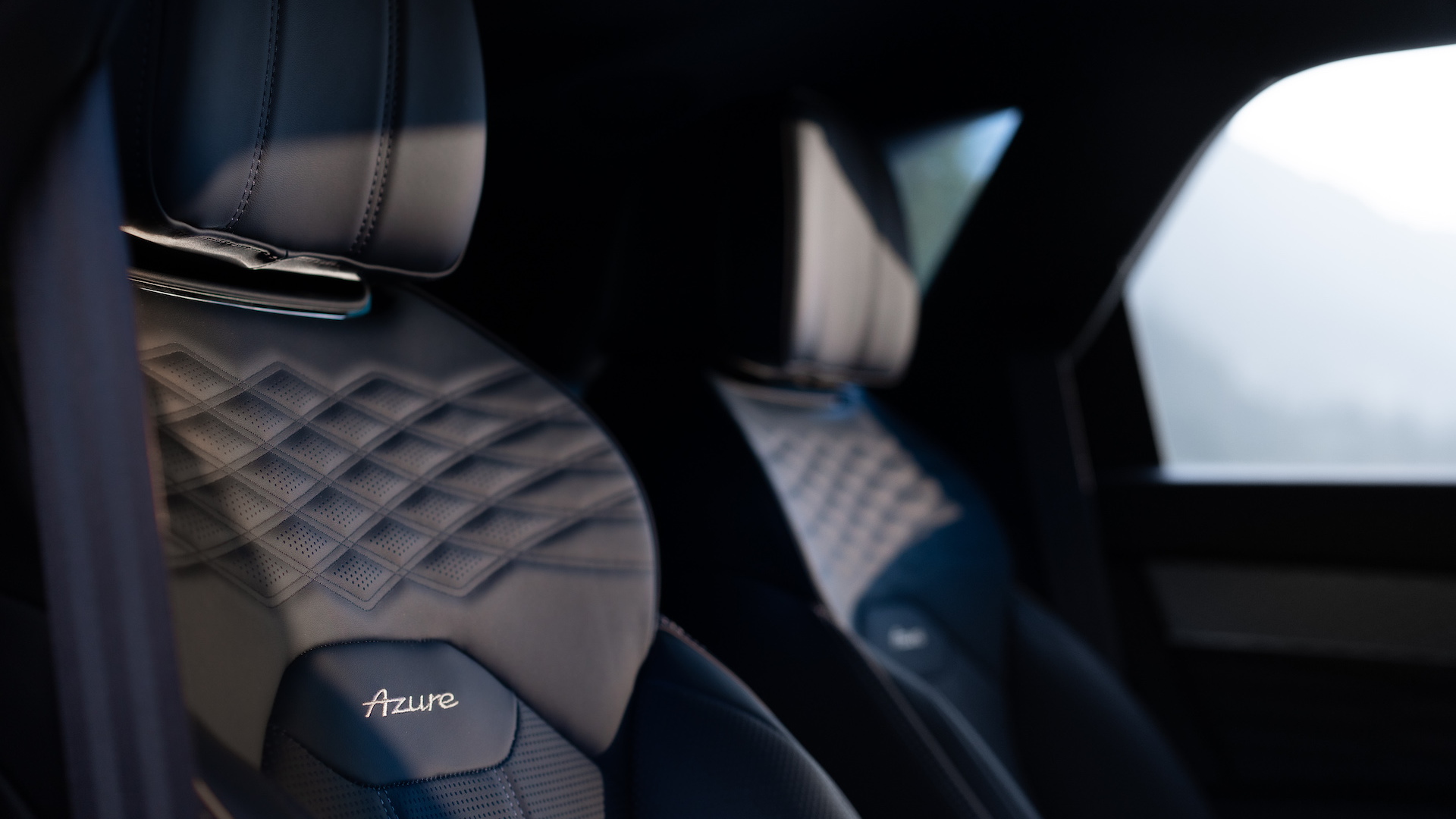 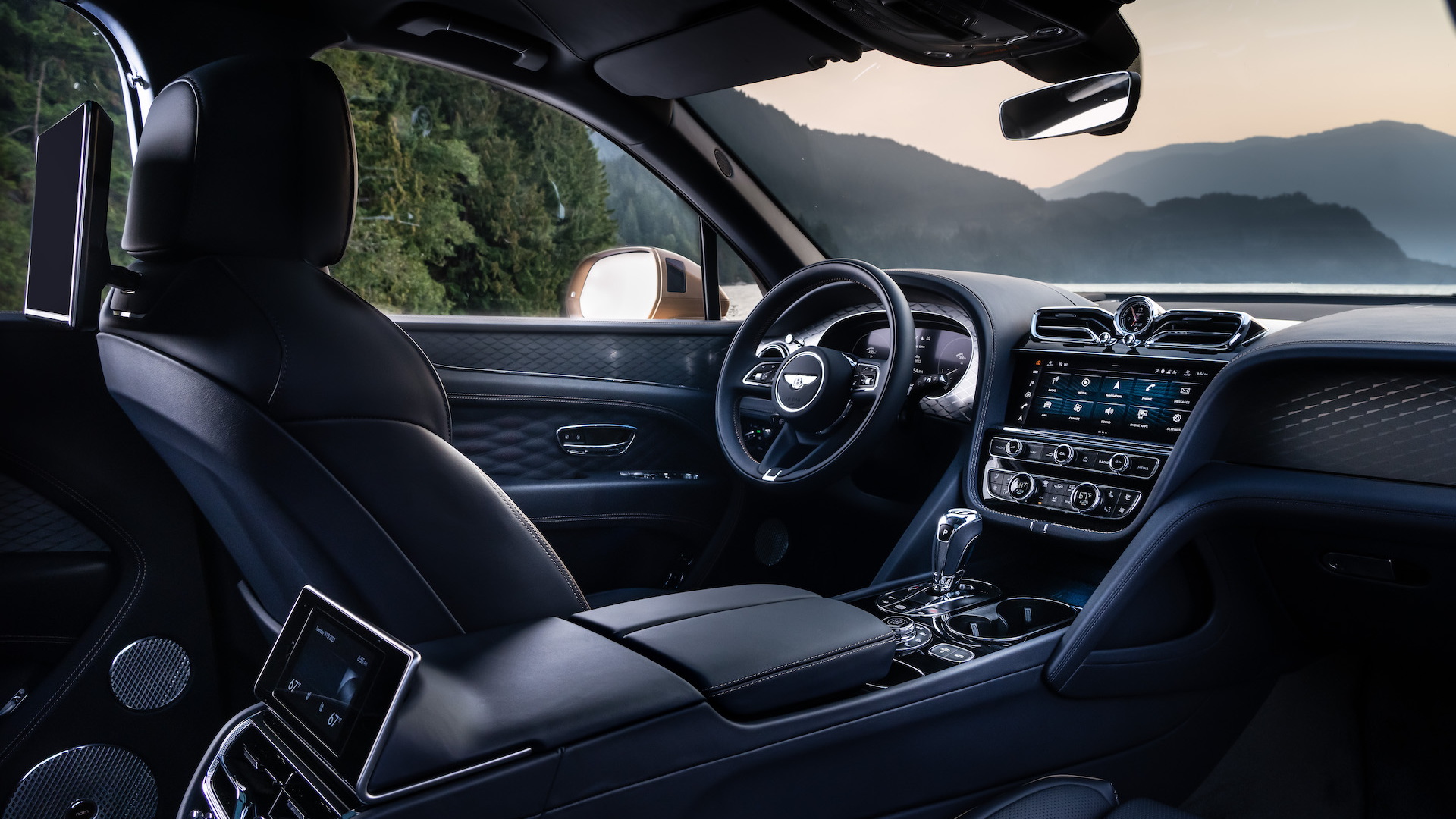 Stretched out in the back seat of a 2023 Bentley Bentayga EWB with the Airline Specification rear seat package, I’m snoozing in the best seat in the automotive world. My feet are up on a footrest, my head is nestled in a soft pillow, and I’m being treated to the Wave massage function on Max intensity.

To ensure I remain relaxed, the seat monitors my body temperature and turns on seat heating and/or cooling as needed. It inflates and deflates in a rhythm like my own breathing: a Postural Adjustment function uses six thigh, shoulder, and lumbar massage pockets to adjust the seat shape up to 177 times every three hours to ease pressure points and avoid fatigue. It’s all working quite well during my roughly half-hour doze.

The Airline Specification doesn’t come standard on the new Bentayga EWB (Extended Wheelbase), but it would almost be a shame not to choose it. The extended-wheelbase body style adds 7.1 inches to the Bentayga, and all of it goes to back seat space, which opens up a generous 40.9 inches of rear seat leg room. However, in the stretched out Relax mode, which reclines the seatback 40 degrees and pushes the front passenger seat forward, my 5-foot-9 frame doesn’t give me quite enough room to straighten my legs without butting up against the front seatback.

Bentley offers the Airline Specification with the Bentayga EWB’s 4+1 or four-seat configurations. The 4+1 version has a rear center console that can flip up to convert to an occasional rear middle seat. A five-passenger version is also available with a rear bench seat. Bentley hasn’t shared a price for the package, but it will likely run about as much as a compact car. Then again, a Bentley rep said the EWB will already cost about 15% more than the roughly $190,000 Bentayga, so why not throw a Corolla on top of it?

A supremely comfortable back seat isn’t the only interior upgrade of the EWB. Every Bentayga EWB sports a front center console that extends back for rear seat access and includes a wireless charging cradle. It’s also home to the removable Touch Screen Remote that rear seat passengers can use to control their 16- or 22-way power-adjustable seats, as well as the climate controls, radio and media options, blinds, and interior lighting. The console is also home to buttons that activate power-closing rear doors, a first for Bentley.

In addition, the design of the diamond-stitched leather upholstery now uses thinner thread with a smaller, closer stitch arrayed in a new pattern that stretches the diamonds as they move farther off center. Newly available Bentley Diamond Illumination sends light through perforations in the door trim. It uses 12 LEDs in the front doors, and 22 in rears, and the intensity of the lighting can also be controlled through the remote. New heated rear-door and center armrests add a little more comfort on cold days. Bentley even offers a new trim that embeds photo-etched metal badges under polished lacquer.

Bentley offers the Bentayga EWB in a new Azure specification that will sit alongside S/Speed and Mulliner versions for the brand. While S and Speed are for sporty variants and Mulliner is the ultimate in personalization, Azure aims for quiet luxury. What better way to go Azure than with the Airline Specification?

In the Bentley tradition, the EWB's interior changes are all quite breathtaking. For my money (would that I had so much), Bentley crafts the finest interiors on the market. They sport a combination of attractive design and high-quality materials that may be matched individually but not together. More room just means more Bentley interior goodness.

Longer but just as dynamic

It may simply be a longer Bentayga, but Bentley views the EWB as a fifth model line. The leviathan sports 2,500 new parts compared to the vehicle it’s based on and that includes a completely new underbody pan. All the length is in the rear doors and rear seat. Other exterior changes include a new grille inspired by the Flying Spur sedan with chrome vertical vanes in front of black mesh. The EWB also has a new 22-inch wheel design and a repositioned panoramic sunroof to provide more light for the set-back rear seat occupants.

However, Bentley aims to make the EWB drive like other Bentaygas by adding rear-axle steering that actually makes its turning radius slightly shorter than the standard wheelbase model at 38.7 feet. The rear wheels turn up to 2.5 degrees opposite the fronts at lower speeds to virtually shorten the wheelbase and make the EWB more maneuverable in tight spots.

On the road, I can’t tell the difference between the EWB and previous Bentaygas I’ve driven. It has the same solid, planted, substantial feel that skirts the border between luxury and sportiness. The steering is direct and weighty, if perhaps a tad slow. Despite 5,542 lb of weight, the big beast doesn’t lean noticeably in corners and even responds well to attacking the turns on a few twisty Vancouver roads Bentley has chosen for the media drive. That’s thanks to standard active anti-roll bars that firm up in corners to combat lean and disconnect on the straights for best comfort.

Bentley also outfits the Bentayga EWB with a standard three-chamber air suspension and adaptive dampers. With those 22s, the ride is firm but forgiving, even in Sport mode.

A twin-turbo 4.0-liter V-8 turns the Bentayga EWB’s considerable weight into urgent forward momentum. The engine, shared with the likes of Porsche and Audi, makes 542 hp and 568 lb-ft of torque, pushing the Bentayga EWB from 0-60 mph in just 4.5 seconds on the way to a top speed of 180 mph. Thus far no hybrid or W-12 are offered, and the W-12 isn't expected to make it into the Bentayga EWB except perhaps in a limited-run model.

The V-8 can rumble and bellow in other applications, but here it’s reserved, only raising its voice when pushed hard. It otherwise fades into the background, as do the smooth shifts from the 8-speed dual-clutch automatic. A mode selector has Comfort, Bentley, Sport, and Custom drive modes for the street. During my drive, I stick mostly to Sport to get the best engine response without paying too big a penalty in ride quality.

The off-road modes consist of Snow & Grass, Dirt & Gravel, Mud & Trail, and Sand Dunes, and each adjusts the standard all-wheel-drive system, throttle, and traction and stability control to work best in that type of terrain.

A drive around the ski jump area at Whistler Olympic Park showed the Bentayga EWB can handle going up and down steep gravel trails, but the standard Pirelli Scorpion tires won’t have enough grip for challenging mud and the longer wheelbase will prevent access to tighter tree-lined trails. That’s certainly as much capability as this vehicle needs, though. Leave the tougher stuff for off-roaders costing a quarter of the price or less.

The 2023 Bentley Bentayga EWB makes a big, luxurious vehicle even bigger and more luxurious. It truly does expand the Bentayga’s already impressive all-around capability for anyone who gets behind the wheel. However, the best place to be in this vehicle will often be the back seat. It’s a good place to get some Zs.

Bentley paid for airfare and hotel for Motor Authority to fall asleep on the job.