Today, the Chevrolet Corvair is best known for being spotlighted in consumer advocate Ralph Nader's 1965 book "Unsafe At Any Speed," but Jay Leno feels there's more to the Corvair than that. On the latest episode of "Jay Leno's Garage," he showcased his 1966 Chevrolet Corvair Corsa to clear up what he views as myths about the car's history.

The Corvair was introduced in 1960 in an attempt by General Motors to meet growing demand for smaller, more affordable cars. Like one of the most popular economy cars of the time—the Volkswagen Beetle—the Corvair was rear-engined, air cooled, and used swing-axle rear suspension.

That suspension was what drew Nader's attention. In his book, Nader said it made the Corvair more likely to roll over, and held up GM's lack of response to the alleged safety issue as an example of automakers putting cost cutting ahead of safety. Fallout from the book, and Nader's congressional testimony, laid the groundwork for today's automotive safety regulations. Ironically, Nader may have also kept the Corvair alive, according to Leno. 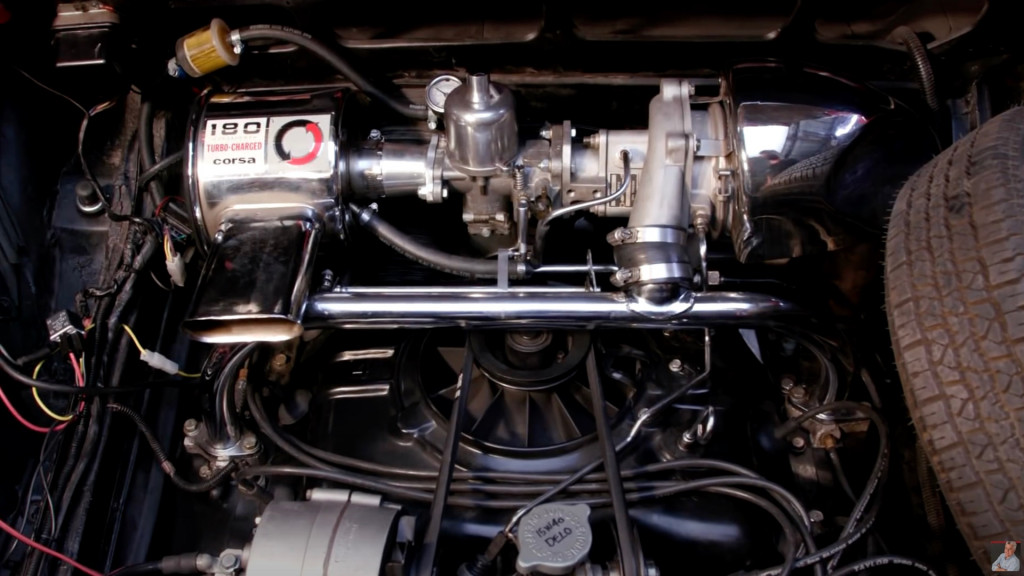 Chevy was considering dropping the Corvair after 1966, as executives felt it couldn't compete with the Ford Mustang, but they didn't want it to look like they were capitulating to Nader, so they kept it in the lineup, Leno said. An updated version with redesigned suspension was launched for the 1966 model year, and remained in production until 1969. Chevy sold 1.8 million over the entire production run.

The car featured here is one of those later models, and it's also the Corsa version, sporting a turbocharged aluminum flat-6 engine. This was the first turbocharged production car, Leno said, although GM released the Oldsmobile F-85 Jetfire just a few months after the Corsa. The engine displaces 164 cubic inches and produces 180 hp—numbers that wouldn't be out of place on the spec sheet of a modern turbo family sedan or crossover.

Watch the full video to see Leno driving this turbo Corvair on the streets of California. Besides the coupe featured here, Chevy also offered the Corvair in convertible, sedan, wagon, pickup truck and van body styles. Yenko even created a performance version called the Stinger. Leno also has a Corvair pickup and Stinger in his collection, and they've been featured on previous videos that are worth checking out as well.