The Bentley Continental GT isn't built like most other cars. Bentley prides itself on mixing hand craftsmanship with modern manufacturing techniques. This documentary provides an in-depth look at how those two elements combine to make one the world's glitziest luxury coupes.

The Bentley factory in Crewe, United Kingdom, has been in operation since 1938. It started out building Rolls-Royce airplane engines for World War II, and transitioned to making cars for both Rolls-Royce and Bentley after the war. The factory was included with the Bentley brand when it was split from Rolls at the turn of the century. Today, it employs about 4,000 people, who build about 11,000 cars per year.

At first glance, the Continental GT assembly line looks similar to that of most other cars, but some things set Bentley's build process apart.

Early in the assembly process, workers hoist the entire wiring harness into the body shell as one unit. The harness weighs about 100 pounds and moved using a small crane. It includes nearly five miles of wiring, 2,300 circuits, and 92 electronic control units, according to the documentary. Workers have nine minutes to route wires and plug everything in before the car moves on to the next station. 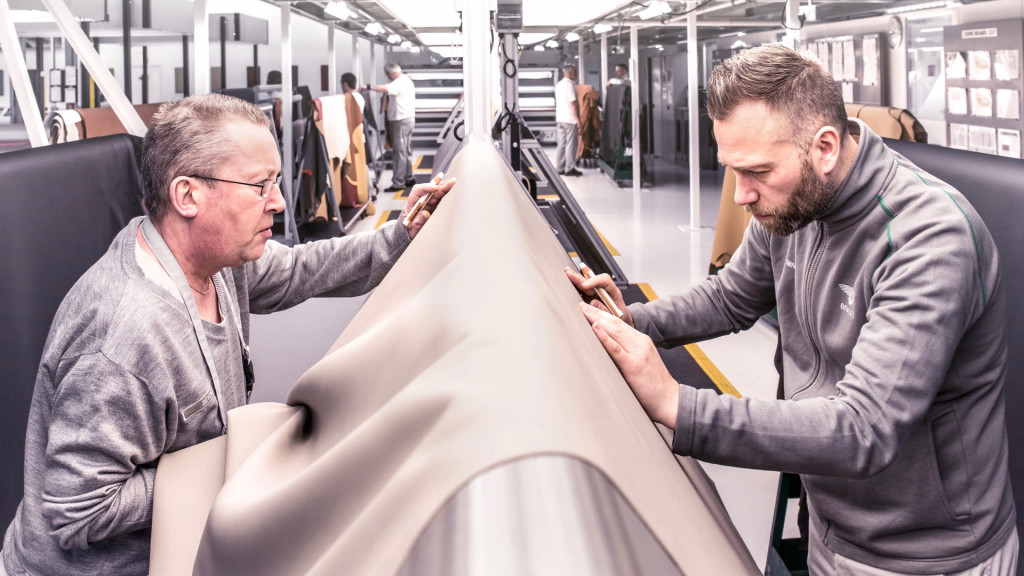 A ceiling-mounted conveyor carries the car from station to station, where various components are added. All running gear, including the engine, transmission, axles, and suspension is married to the body at once.

The 6.0-liter twin-turbocharged W-12 engine depicted here makes 626 horsepower and 664 pound-feet of torque, which gets a Continental GT coupe from 0-60 mph in 3.6 seconds and on to a top speed of 207 mph. A 4.0-liter twin-turbo V-8 is also available, and a hybrid powertrain is likely to follow soon.

Away from the assembly line, Bentley employs 500 people just to make leather upholstery for its cars. Each Continental GT coupe uses the hides of up to 12 European bulls, and they're all hand inspected for quality. Machines cut out the leather pieces, but humans sew them together. Wood trim gets similar attention to detail. Veneers are "mirror matched" so that everything looks a single piece of wood.

Bentley recently announced plans to shed 1,000 jobs, or about 25% of its workforce. The news came shortly before Crewe ended production of the flagship Bentley Mulsanne sedan. The factory will continue to build the Continental GT, the related Flying Spur sedan, and the Bentayga SUV, with an electric model expected in 2025.