A delightful story arrived in my inbox recently. Headlined “The six weirdest places F1 has raced,” it was written by Ben Miles and published by Goodwood Road & Racing, and if you haven’t signed up for the British circuit’s newsletter, you’re missing some great (oh-how-I-hate-the-word) content.

Those six weirdest places in Miles’ mind were a car park in Las Vegas, a horse racing track in England, a baseball stadium in Mexico City, an airport in Florida, the streets of Monaco, and across the famed bricks at Indianapolis.

It’s a nice read and a reminder that auto racing has taken place in some unusual places, which got me to thinking about other perhaps illogical places cars have competed. My list will be limited to the United States. Hey, with our varied and vast landscape, the U.S. offers plenty of geographic diversity. 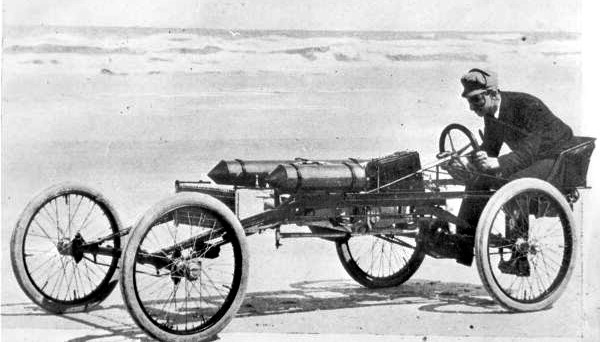 Ransom E Olds drives his Pirate on Ormond Beach in 1902

I’ve always wondered who first looked at a sinister shell of a lobster and thought the critter might make a tasty meal. Ditto on the first people to race cars on the hopefully hard-packed sand of a Florida beach, and how many cars were lost because someone forgot to check the tide charts. Nonetheless, American automotive pioneers including Ransom E. Olds and Alexander Winton demonstrated how fast their cars could run by running them on Florida’s Ormond Beach.

Fred Marriott, Malcolm Campbell, Henry Segrave and others set land speed records there. NASCAR became famous for its annual stock car race that sent cars south of Daytona Beach on the paved coastal highway A1A, then took them off-road on a bouncing left turn through the dunes and headed them back north on the beach, where they returned to the pavement and the next lap. 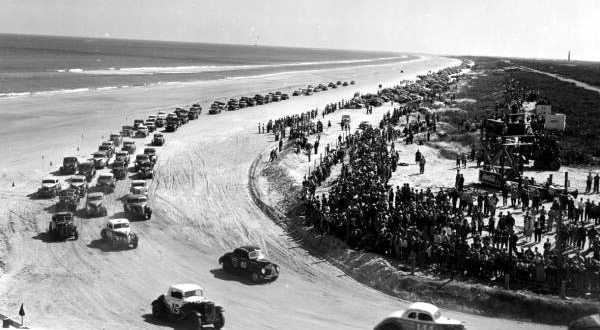 Supposedly the American twist on the European velodrome used for bicycle racing, steeply banked oval tracks made from wood planks were first built to race motorcycles and then automobiles. The first was in Los Angeles in 1910 and the last was built in 1929 in New Jersey. A few were as large as 2 miles around. 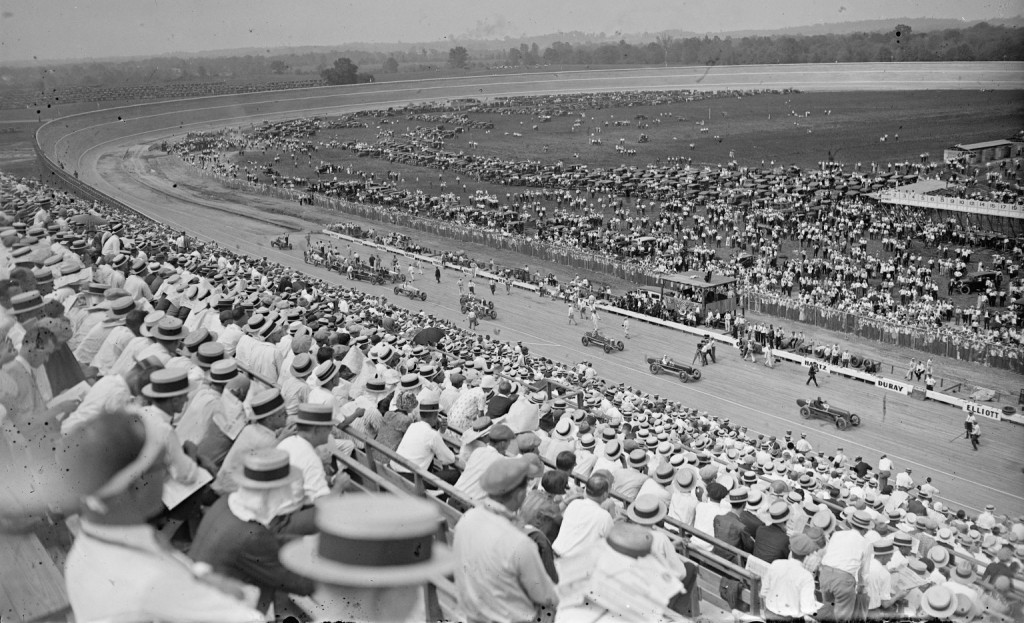 Racing on a board track draws a huge crowd in Laurel, Maryland, in 1925

The tracks were reportedly inexpensive to build but expensive to maintain — sometimes carpenters were making repairs from beneath the track while races were being run above them — and incredibly dangerous for riders and drivers. 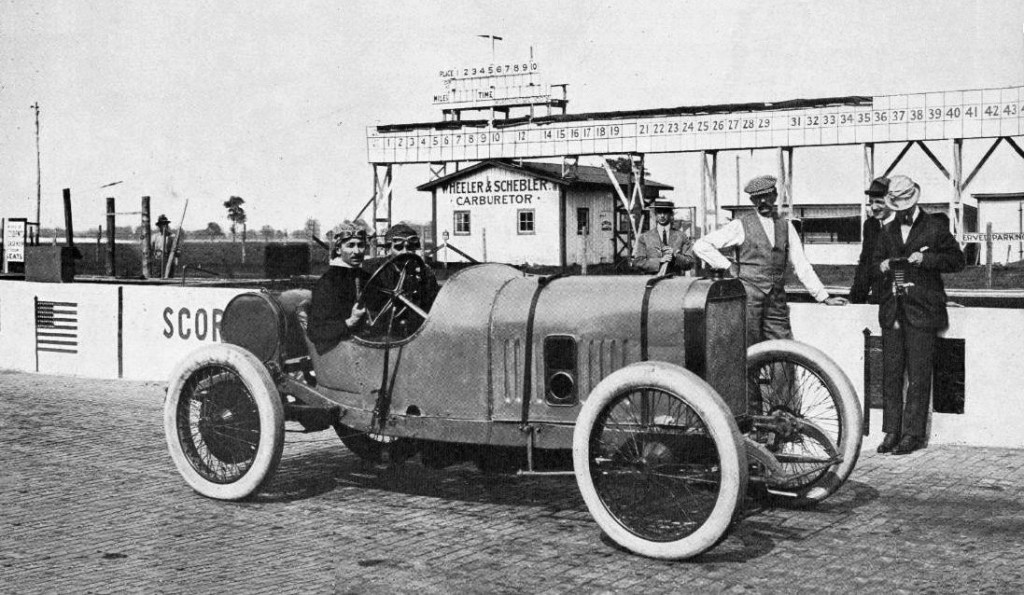 Have you ever driven on an old city street made from cobblestones or bricks? Better have tightened your dentures. Yet when the four founders built their automotive testing facility just west of Indianapolis, they selected bricks as the pavement of choice for their 2.5-mile rectangular layout.

Actually, they didn’t start with bricks. The first surface for the track in 1909 was a mix of gravel, limestone, tar and oil, and drivers were bloodied as debris struck them “like flying through a meteor shower.” By the time of the first Indy 500 in 1911, the track was resurfaced with 3.2 million bricks. 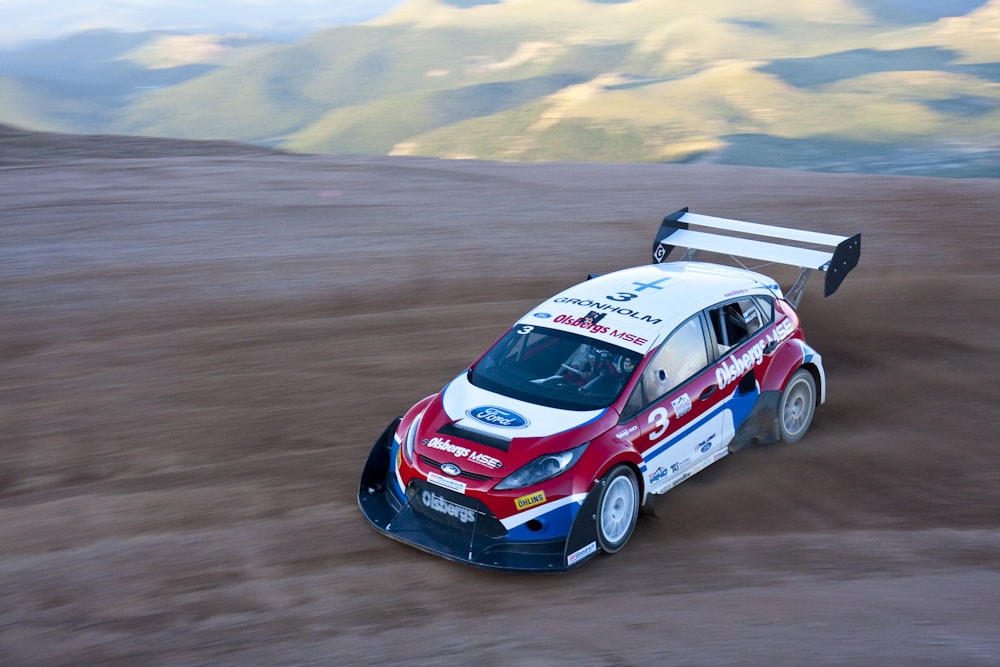 The first Indy 500 took place in 1911. The first race to the summit of Pikes Peak was held in 1916, making it the country’s second oldest motorsports competition. The Climb to the Clouds now is paved, but for decades it was a gravel road that included 156 turns over not quite 12½ miles. If you’ve ever white-knuckled it in your passenger car, just imagine what it’s like to drive it as fast as your fear will permit. 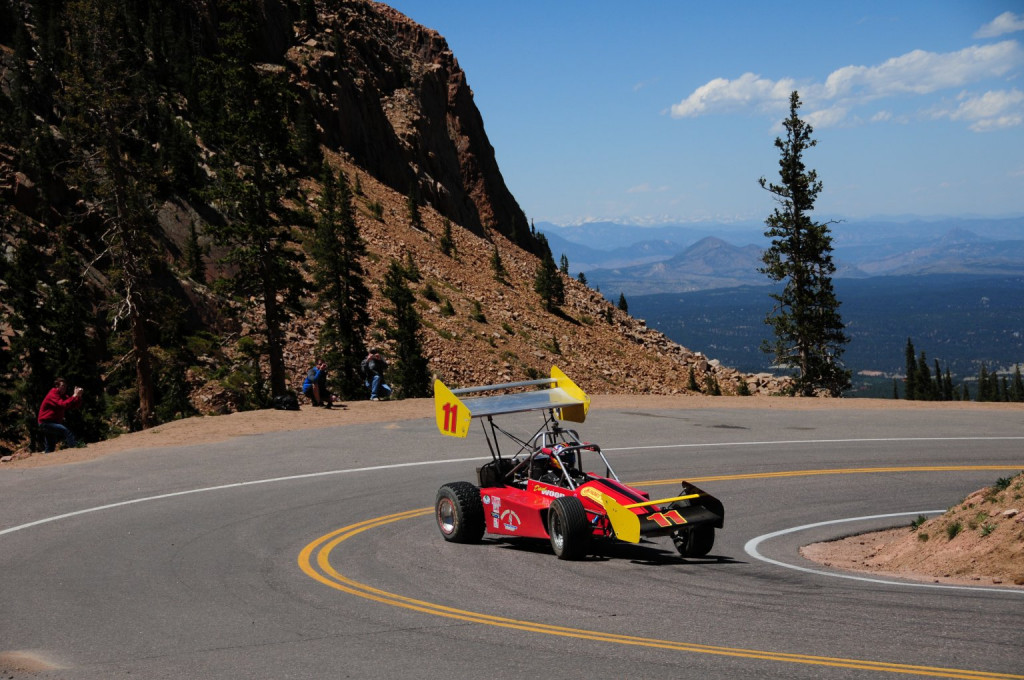 I covered the race during one of the years that a couple of Swedish rally drivers were taking part, and you should have seen the look on the other competitors’ faces — let along those of the team’s brake engineers — when one of the Swedes asked, in all seriousness, why they only were racing up the hill and not back down again. 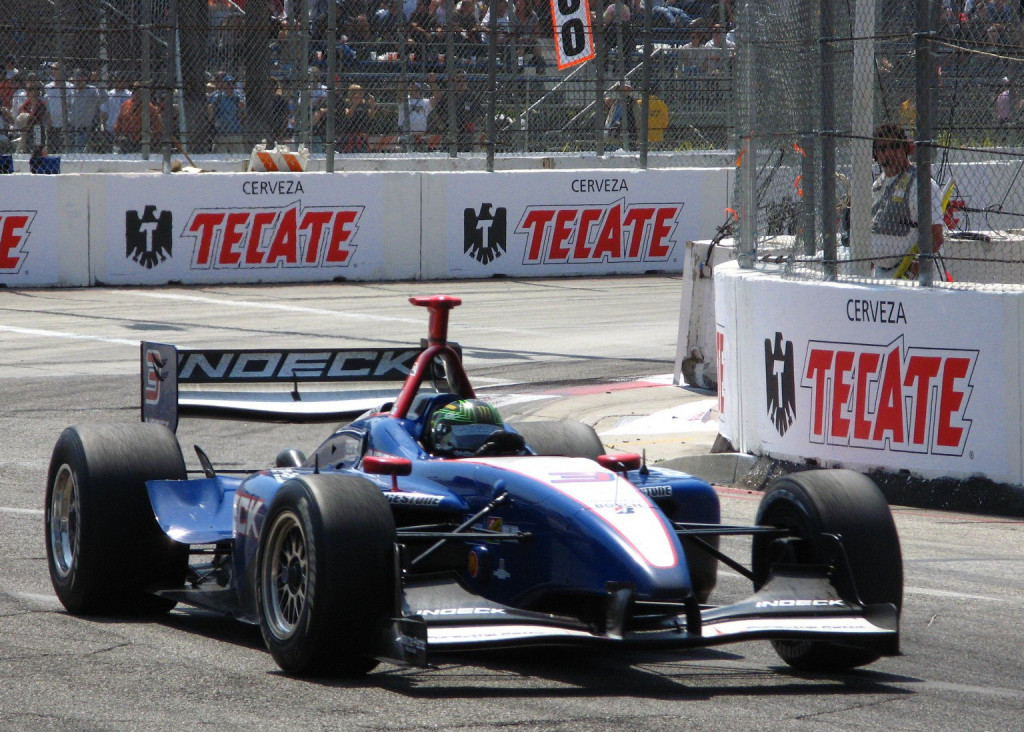 Once upon a time, someone got the bright idea that we should take auto racing to the people, and since people lived in big cities, races should be held on downtown streets. The result was a series of events that were little more than fast, no-passing parades run between Jersey barriers.

There was one place where it actually worked, however; Long Beach, California, where the event became an annual spring break for grownups, none of whom seemed to care much about what was happening on the roadway except for a preliminary “race” that put Hollywood celebrities into regular cars in what devolved into a sort of demolition derby.

As silly as any of those previous venues might seem, at least the races held were organized by some group/sanctioning body and at least some safety precautions were taken. Of course, the most popular place to race in the U.S. has been public streets, whether it’s stoplight drag racing or the latest fad, seeing how fast you can drive coast-to-coast on roads with less-than-usual traffic because people are staying home for fear of the coronavirus.

I’m sure those taking part in such stunts feel inspired by the famed Cannonball Baker Sea-to-Shining Sea Memorial Trophy Dash of the early 1970s. But that was a different time when even the fastest Ferrari averaged only 80 mph across the country.

Such subsequent stunts are not races. They simply are dangerous displays of stupidity on public roads where there is regular traffic, people going to work or families to church, traffic that has enough with which to deal without red-mist yahoos pretending they’re in some sort of competition.