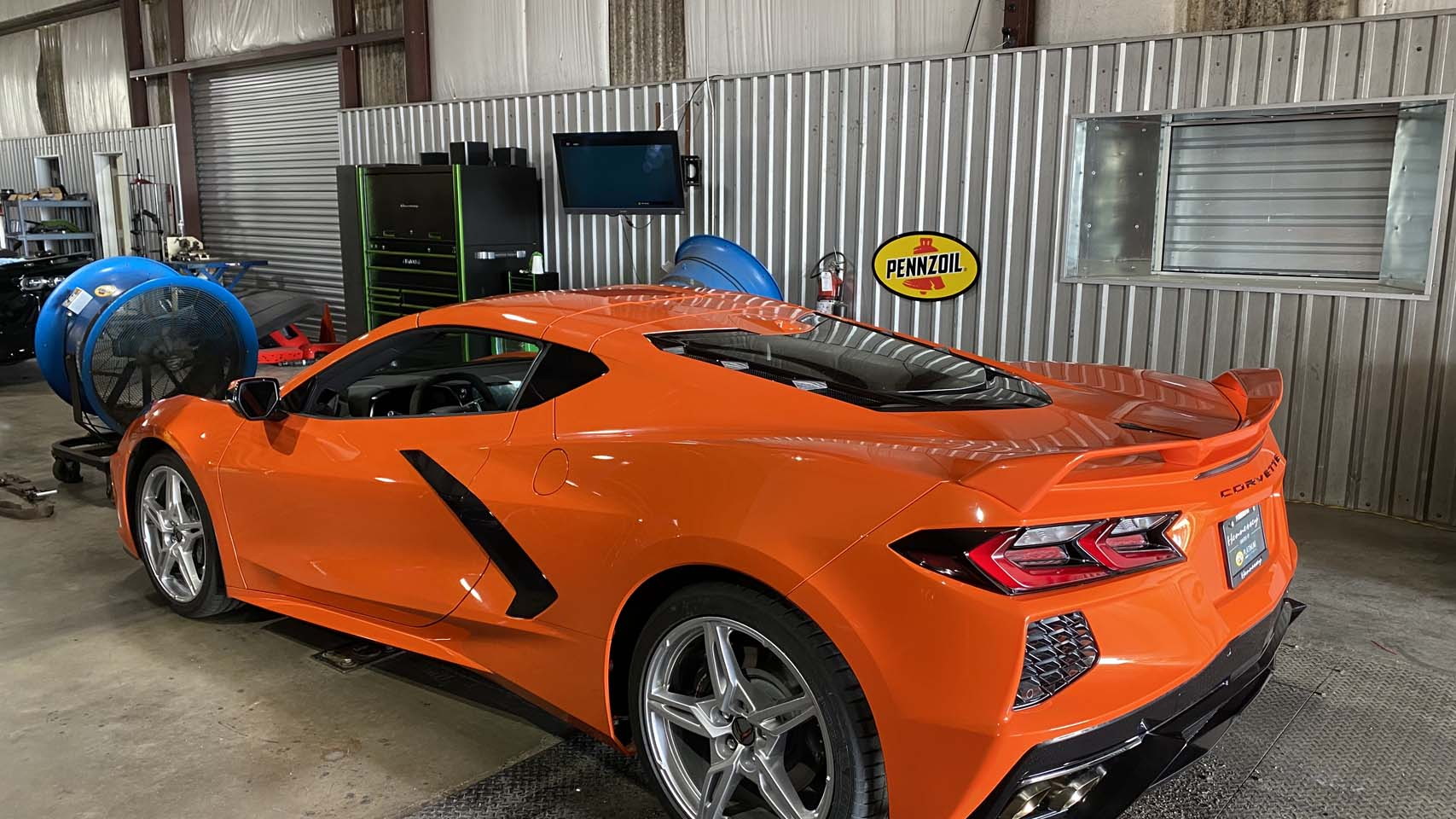 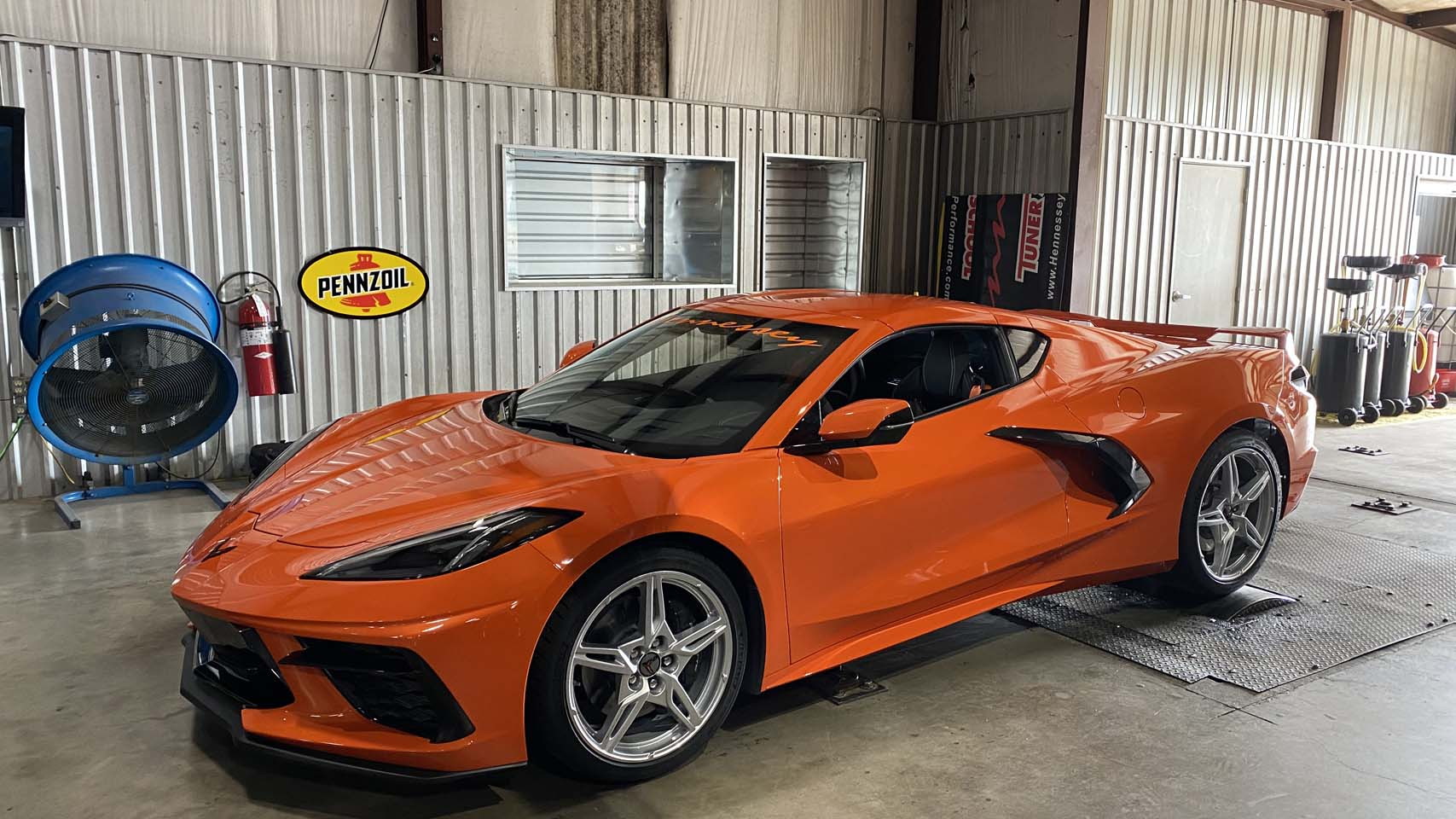 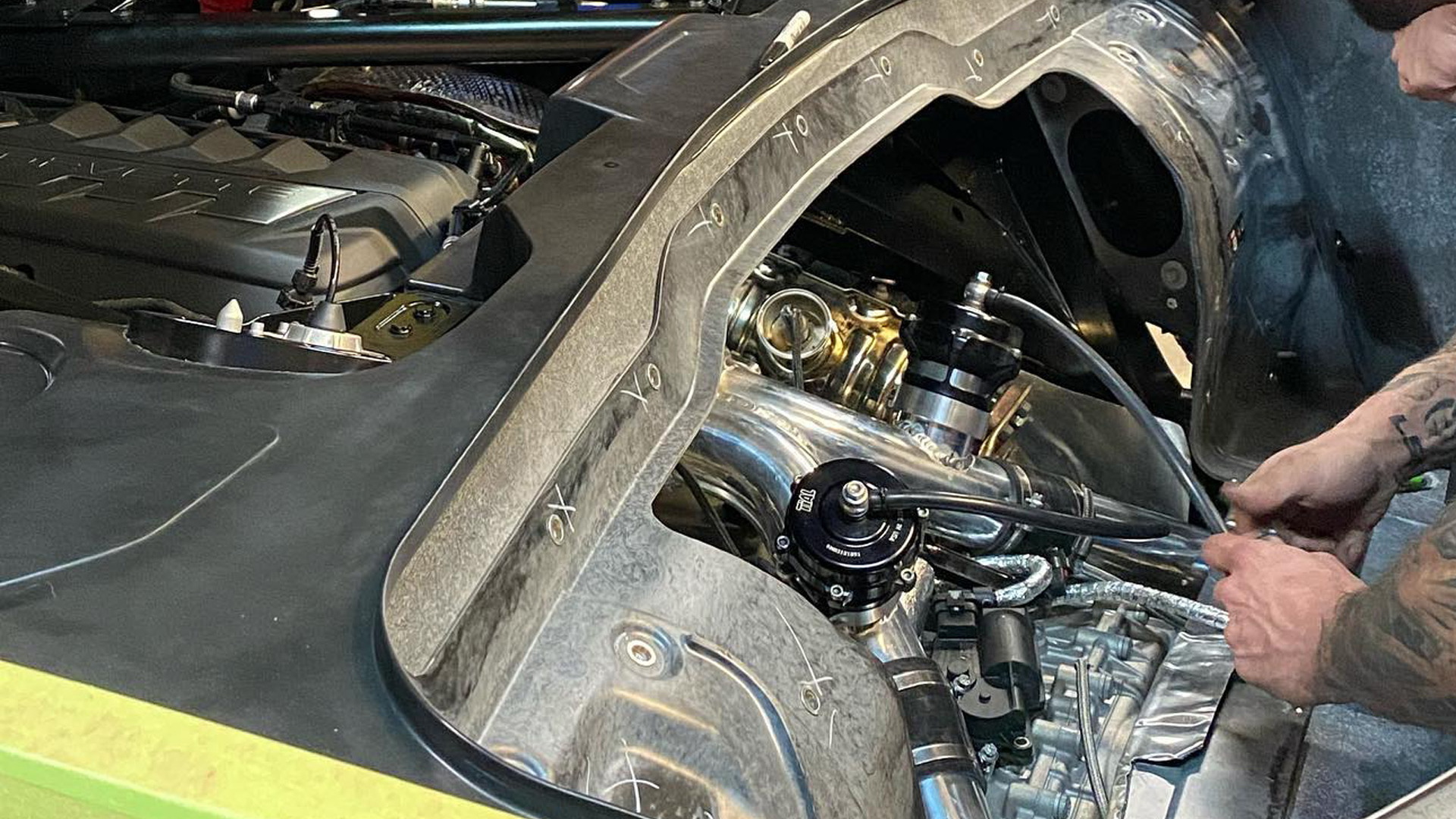 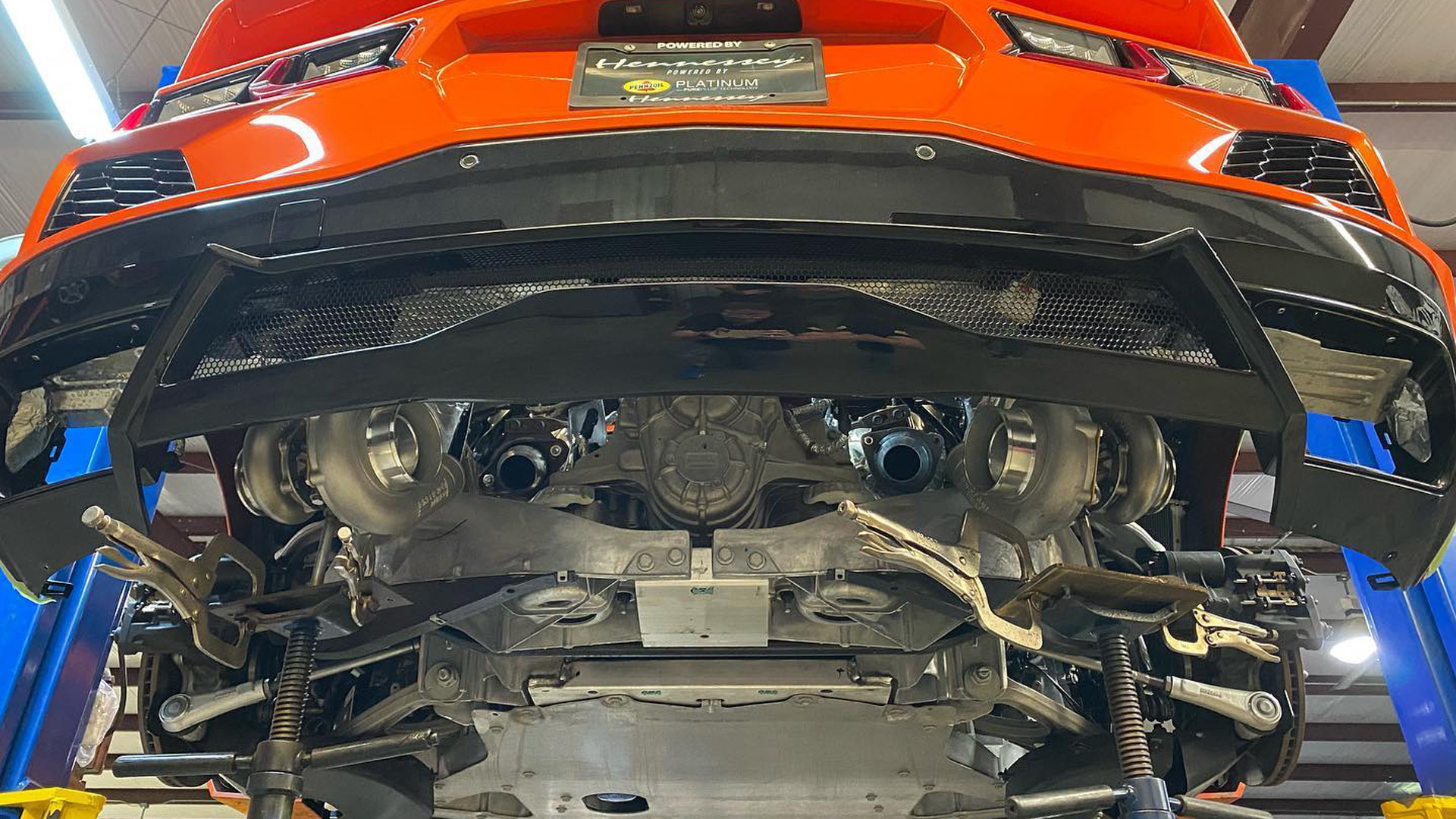 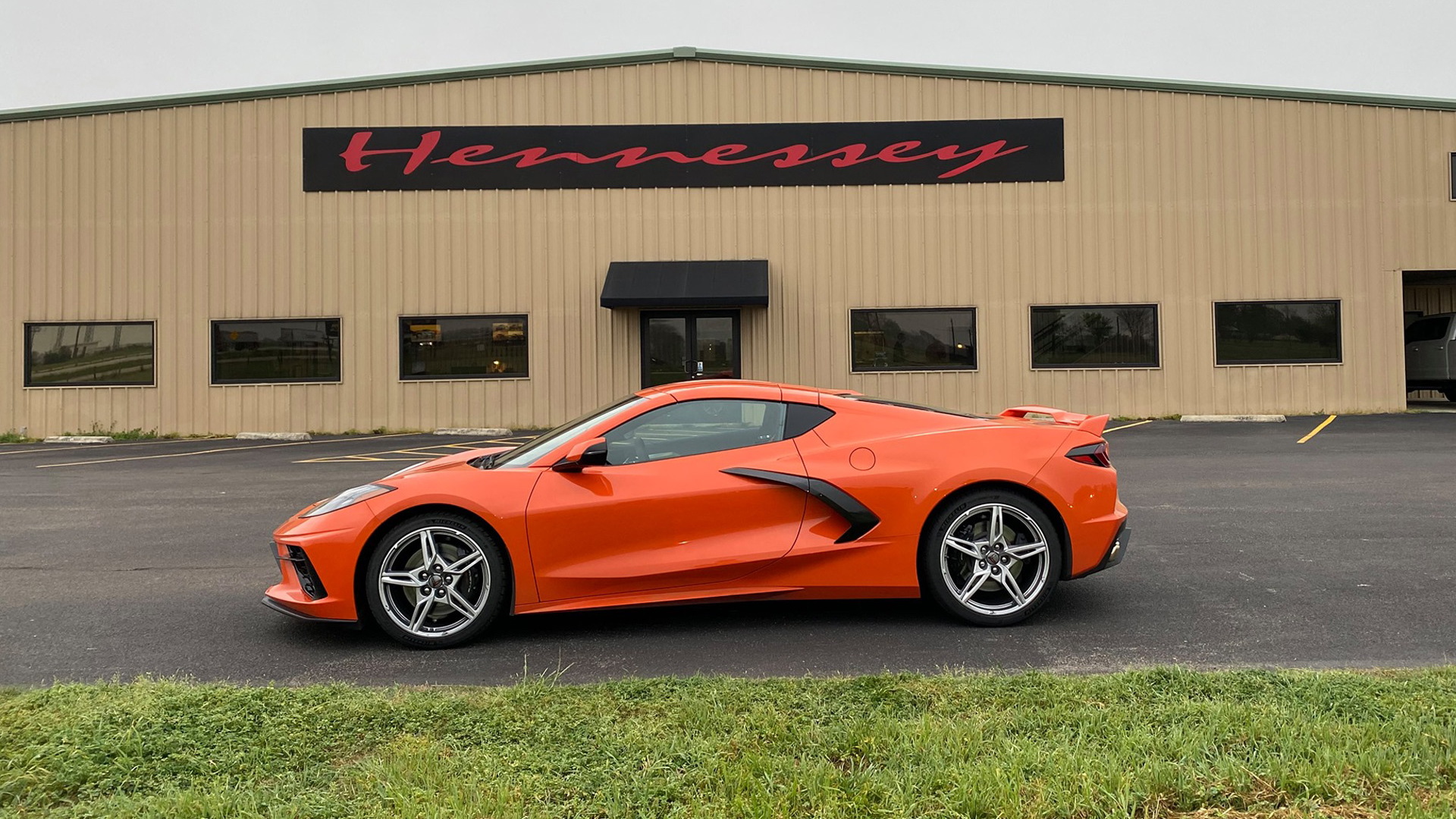 It took 30 hours for Hennessey Performance Engineering to tear apart a new 2020 Chevrolet Corvette, install twin-turbo setup, and put it back together.

It's no surprise, then, that the twin-turbo C8 Corvette isn't ready to be sold to customers. The engine lacks intercoolers and Hennessey hasn't cracked the code of GM's new electrical architecture to reprogram the ECU.

"This is just the beginning, our own car, doing R&D," company founder and CEO John Hennessey told Motor Authority.

On Monday, the engine made 643 horsepower and 570 pound-feet of torque at the wheels on a Dynojet dyno while running just 5 psi of boost. That compares to baseline testing HPE performed on the stock car which revealed 466 hp and 451 lb-ft of torque. HPE plans to offer a 1,200-hp version of the C8, which Hennessey said could make 18-20 psi of boost.

Hennessey took delivery of an orange C8 Corvette in Detroit on March 13. He and his daughter, Emma, drove back to the performance outfitter's Texas headquarters and performed baseline testing before the Hennessey team tore apart the car.

The orange C8 fired back to life on Friday with twin 62-mm Precision Turbos and twin blow-off valves connected to the throttle body mounted behind the catalytic converters. Both turbos are oil-cooled with twin scavenge pumps that feed back into the motor.

The system is not intercooled. Instead, there's a methanol injection setup to keep things from getting too hot. HPE is considering where to put intercoolers. The current packaging has limited space for intercoolers without cutting into trunk space, which Hennessey does not want to do.

Hennessey told Motor Authority his team currently can't tune the factory ECU, but it is looking at aftermarket solutions for the engine management system. He noted it took a year for solutions to come to market for the C7 and added, "hopefully, it won't take a year."

The orange C8 will used for R&D of upcoming modifications. Hennessey said he doesn't expect to deliver modified customer C8s for at least six months, and all will have intercoolers and full plumbing.