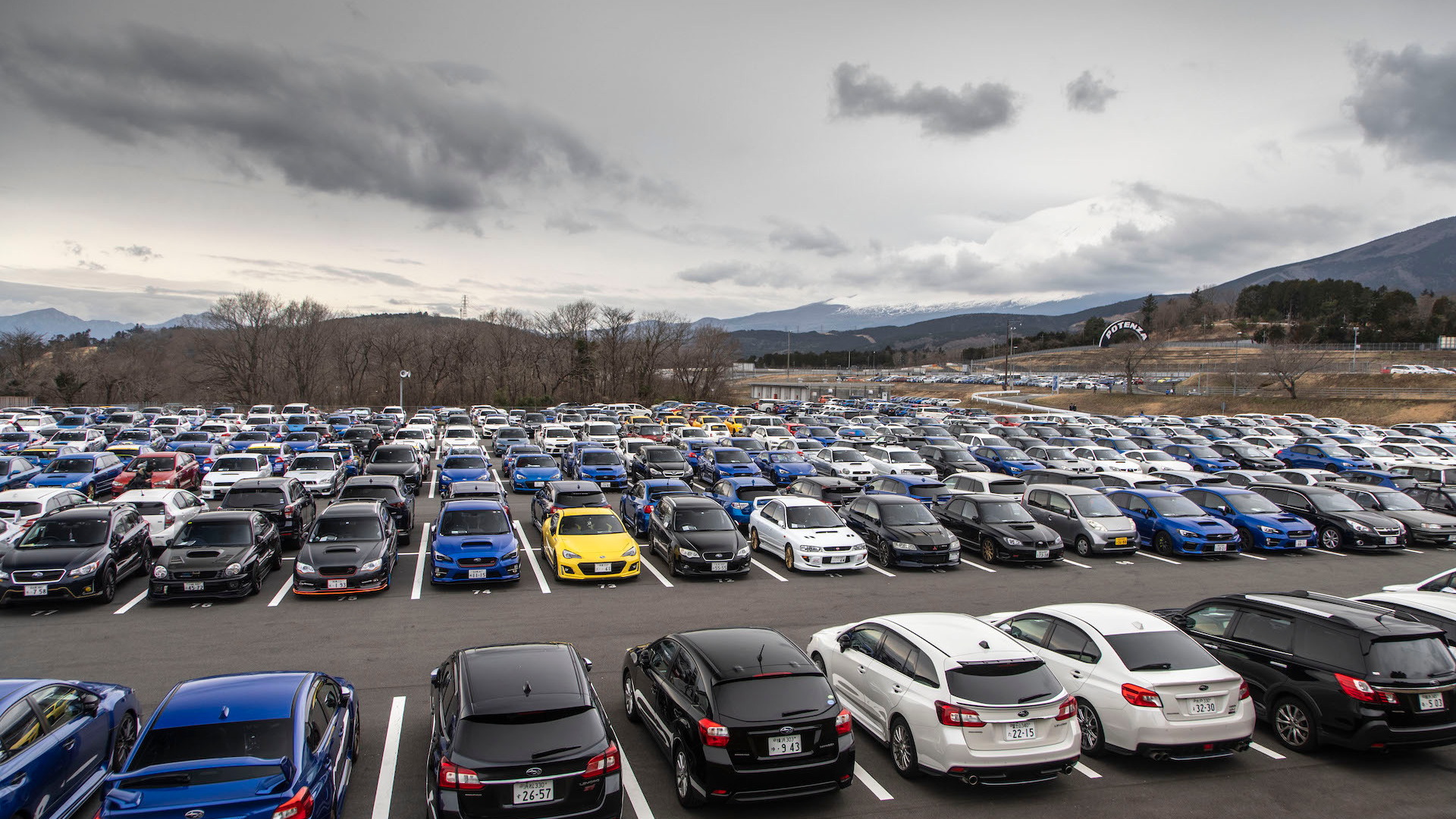 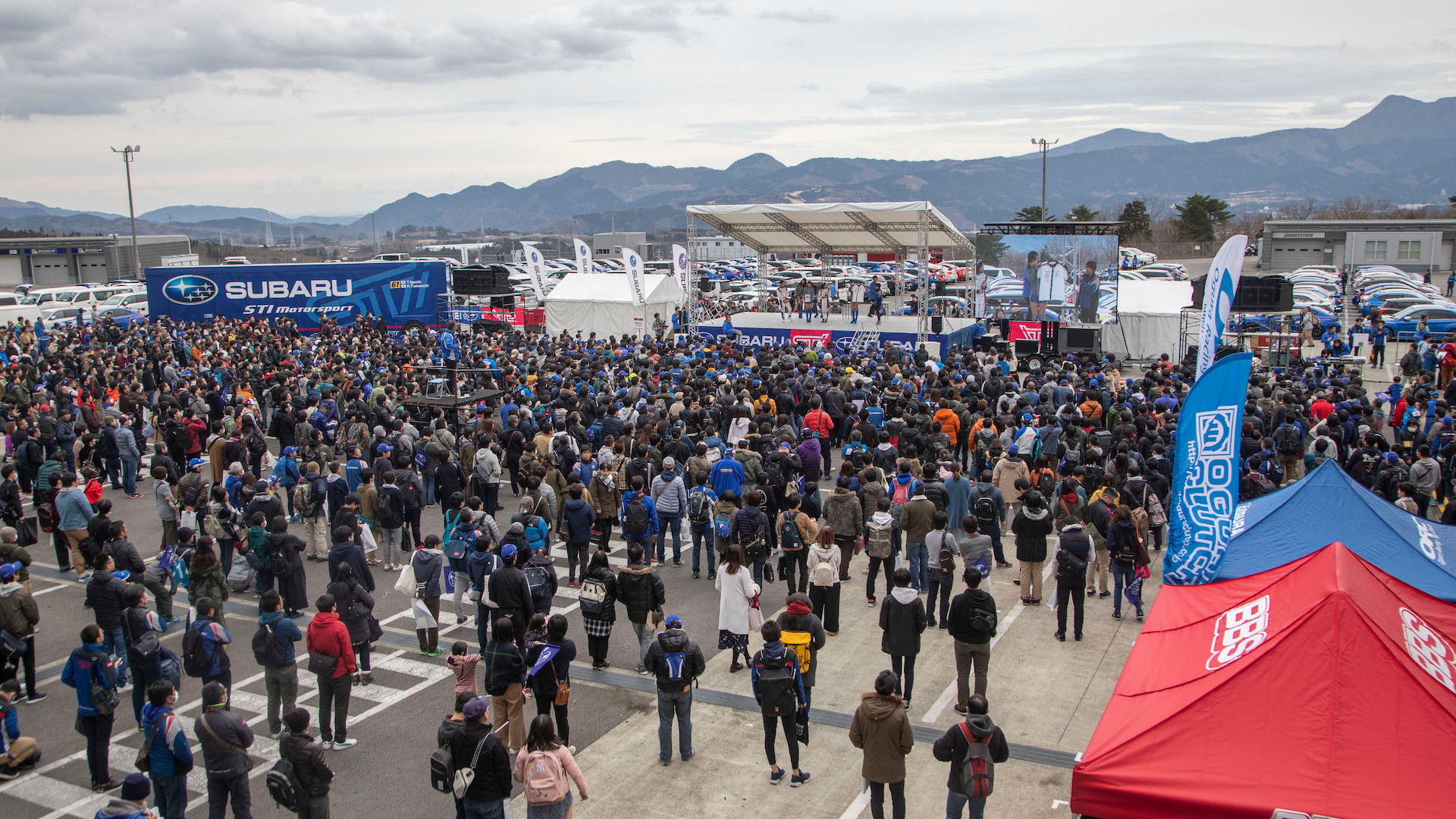 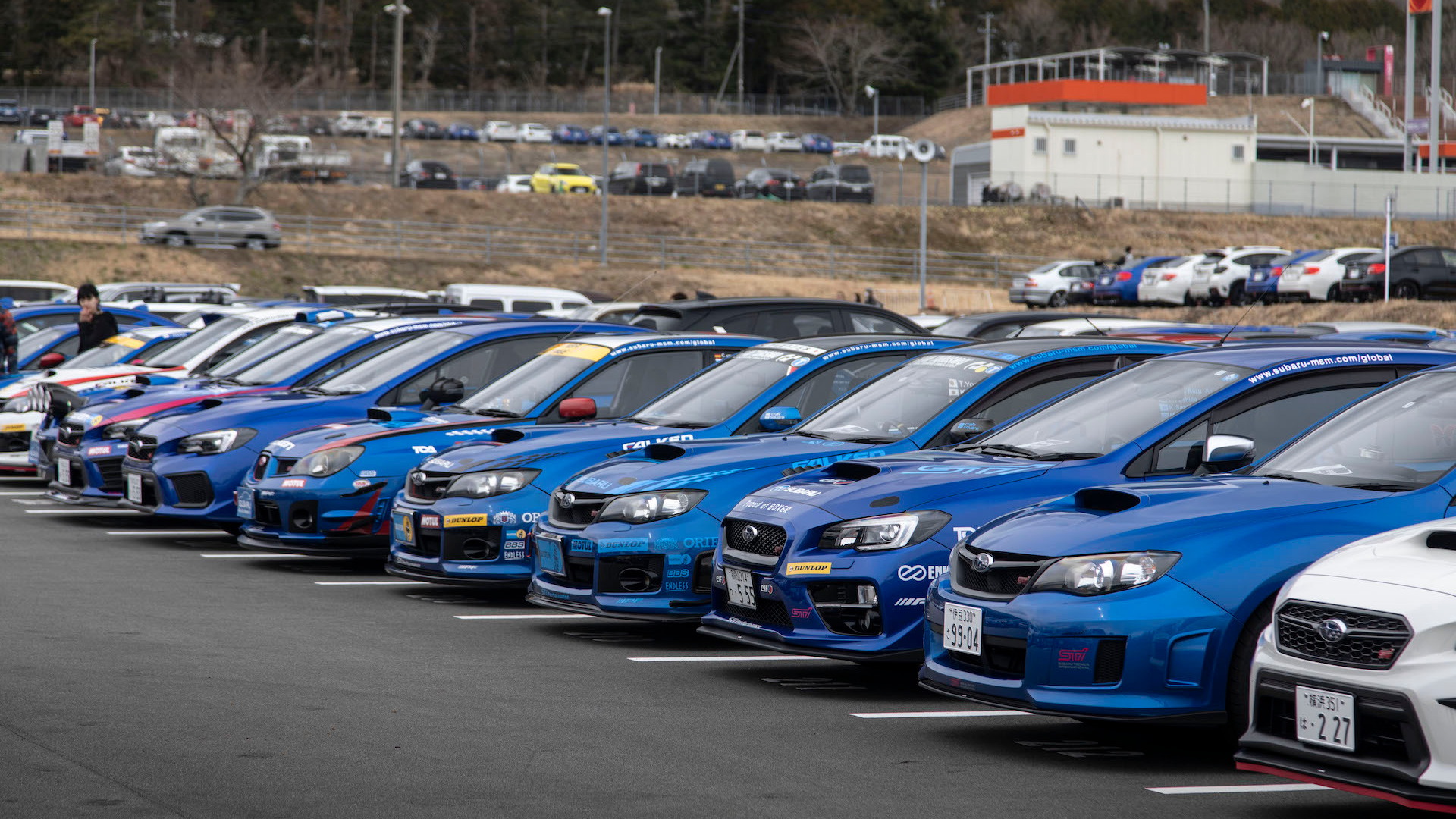 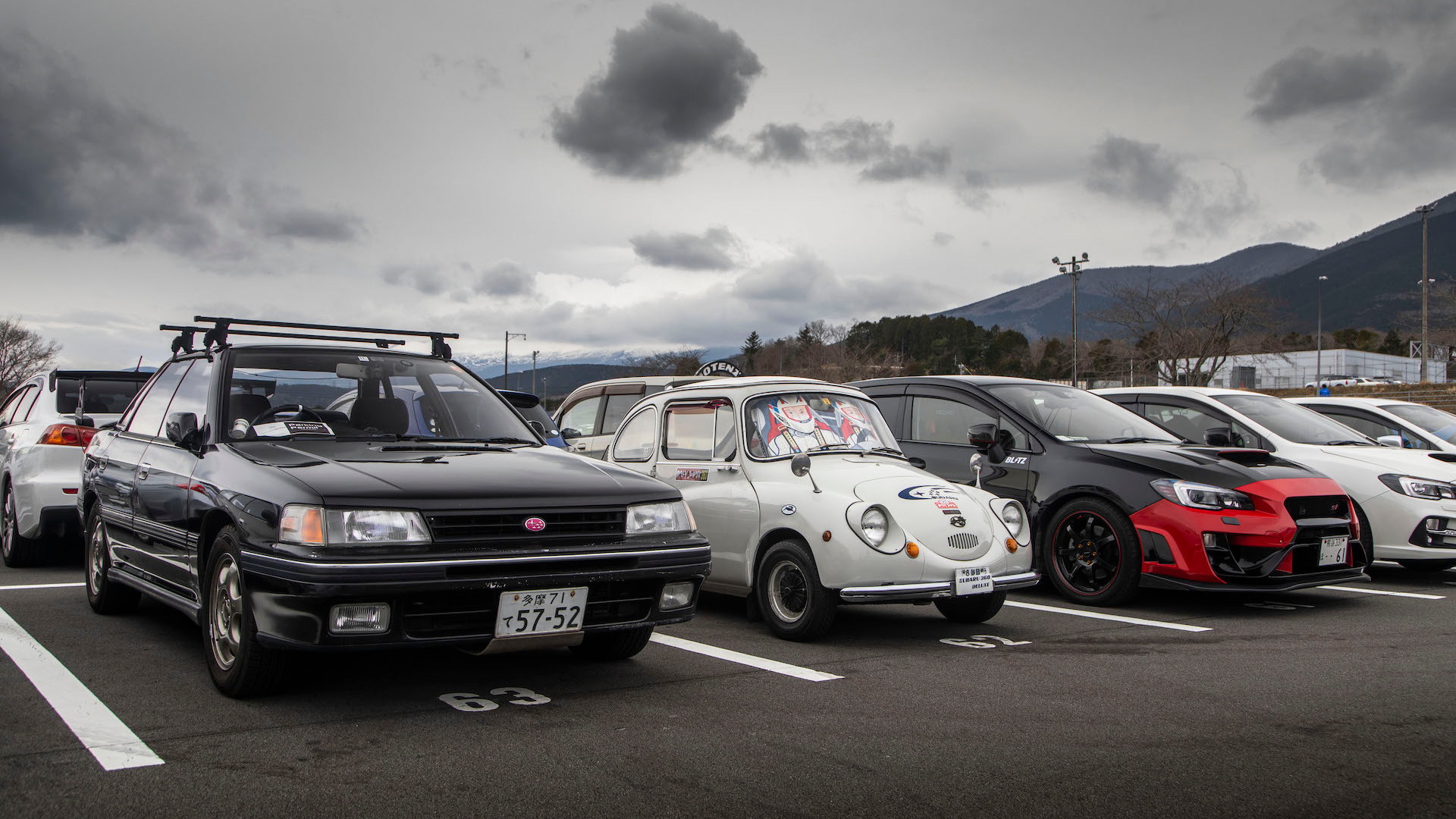 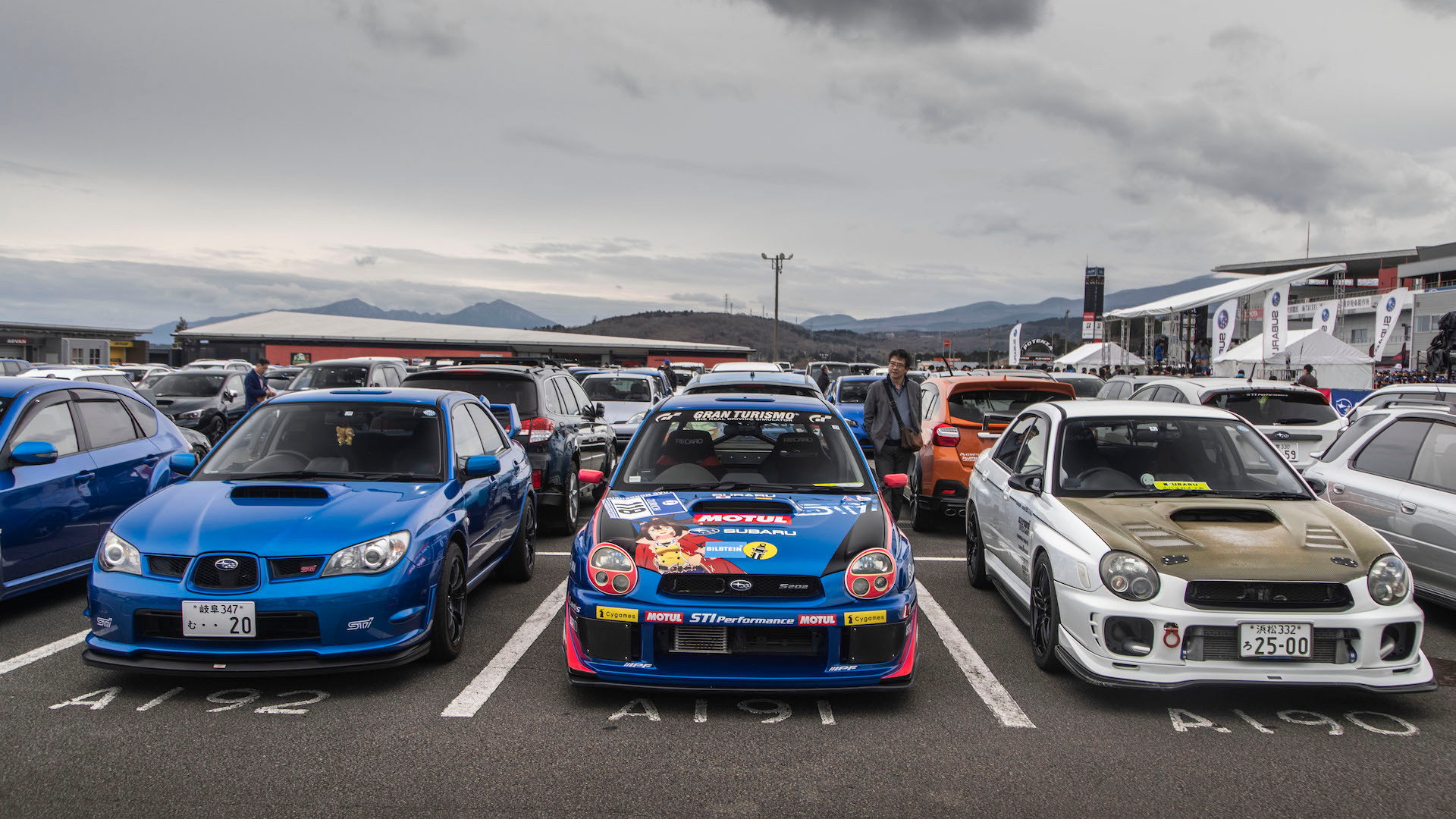 In the shadow of an active volcano, a pop-up city rises up and shouts in unison. The noise bounces off the tarmac and visibly shakes the delicious vapors that rise from nearby food trucks. The young women in long ponytails and short blue satin shorts who cheerlead from a low stage have to be freezing in the barely-50-degree morning air.

This gathering’s more studiously adorable and more fanatic than any of those. The parking lot’s a sea of blue and white Subarus, a smattering of Levorgs and Crosstrek Hybrid tSs, even an SVX. All of them wear STI badges. It’s a tuner party, a Cars and Coffee without a single eyebrow-raising burnout.

It’s also the coming-out for the WRX STI S209, Subaru’s latest collector’s item, but it’s a low-key debut. While the crowd cheers STI’s 31st anniversary and listens patiently to the talk show on stage and snow-capped Mount Fuji begins to drape itself in a gray cape and go back into hiding, a WRX STI S209 wrapped in prototype swirl camo hides on the brief and hilly test track next to “big” Fuji Speedway, waiting for a handful of eager first drivers.

That’s our cue. Helmet on, check the mirrors, wait for the hand that waves us out of pit lane. Salute the flagger on the way into the first turn.

Then don’t let up. 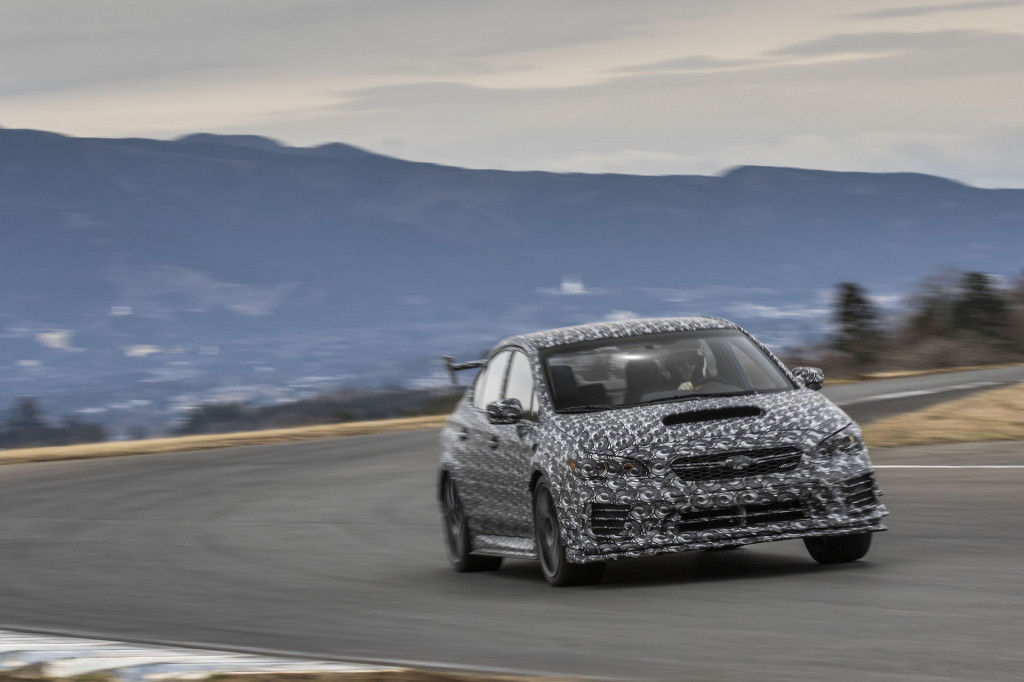 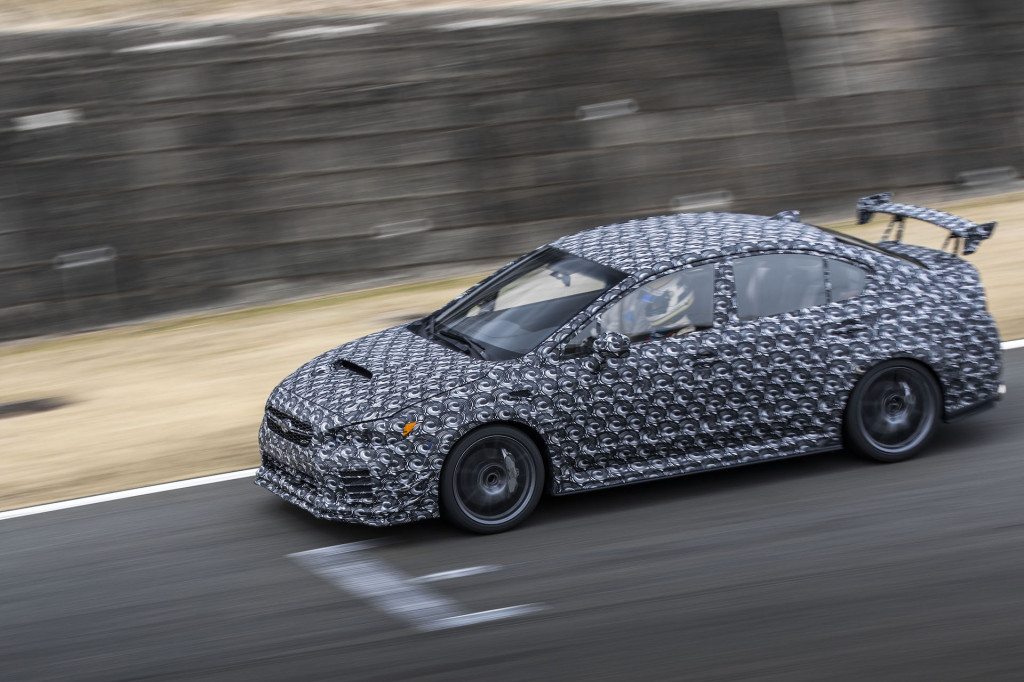 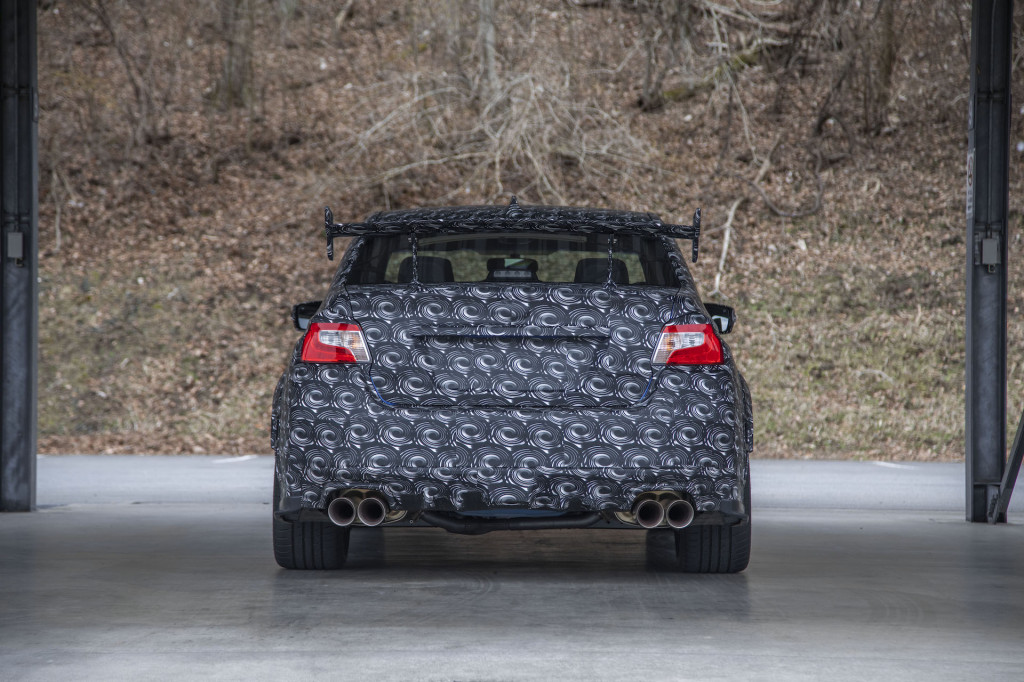 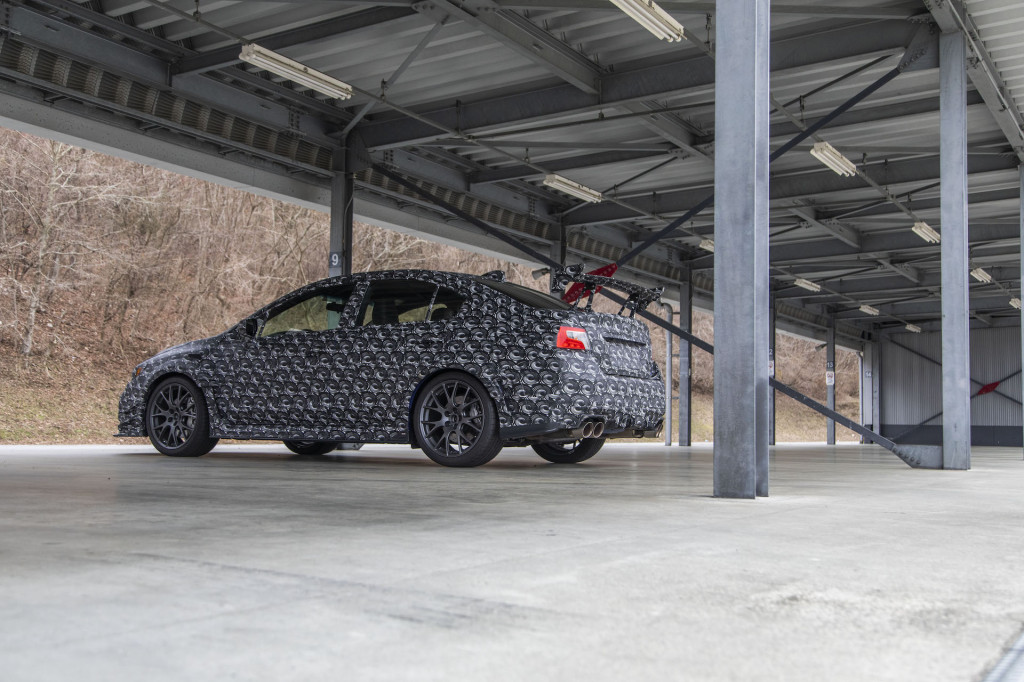 The “S” cars form the peak of performance that Subaru defines downward from S, to STI, to tS (tuned by STI), to the Crosstreks and Imprezas the proles pilot to Costco and the Berkshires. Subaru Tecnica International has been at it since 1988, so it’s hard to believe the S209 is the first STI “S” car to make it to the U.S. Maybe they’ve had their hands full, winning WRC championships and Nurburgring endurance titles. That seems like it would keep a person busy.

The S209 dips the current WRX STI (itself a spin-off of the last-generation Impreza) in the well of STI knowledge. The fenders swell by 1.7 inches, cut in front with vents that cool the engine and in back to cut down on drag. ‘Ring-ready aero mods smooth its tall sedan body: A carbon-fiber roof, front-bumper canards, underbody spoilers, and an immense fixed rear wing. Under all the padding and the S209 badgework and jewelry, it’s still an Impreza sedan—on the inside, too, where sueded seats and a sueded flat-bottom steering wheel call out its mission as much as its serial-numbered S209 badges.

Pop the hood and the hardcore STI tuner knowledge stares up from a 2.5-liter flat-4 engine that’s been superseded in most other Subarus by a new-gen 2.0-liter engine. The 2.5-liter’s more logical for the S209, given the catalog of aftermarket parts it already commands. Engineers claim the 2.5’s easier to crank up to the power they wanted, which is substantial: 341 horsepower and 330 pound-feet of torque, compared to the Japanese-market predecessor S208 and its 325 hp. A larger turbocharger and compressor push out 18.0 psi of boost, versus 16.2 psi in the WRX STI. Also at hand are bigger fuel injectors, stronger connecting rods, higher-flow fuel pump and air intakes and exhaust system, and the chef’s-kiss of a paddle-controlled sprayer that lets the driver spritz the intercooler with water to dial down the temperature and dial up the Inspector Gadget factor.

Tires and suspension changes finish off the S209. Versus the S208’s 255/35R19 tire the S209 wears Dunlop GT600A 265/35R-19 rubber, and gets its own Brembos with special brake pads, too. Bilstein dampers and stiffer coils join with better bushings and a thicker stabilizer bar. The S209’s strut-tower bar has an articulating joint in the middle that allows vertical motion while it ensures horizontal rigidity. Flexible stiffeners are drawn tight from firewall to fenders for better structural rigidity in the 3,485-pound body.

Those stiffeners are in place to allow some give in the suspension. They know when to give and take, when to be flexible and when to apply tension. 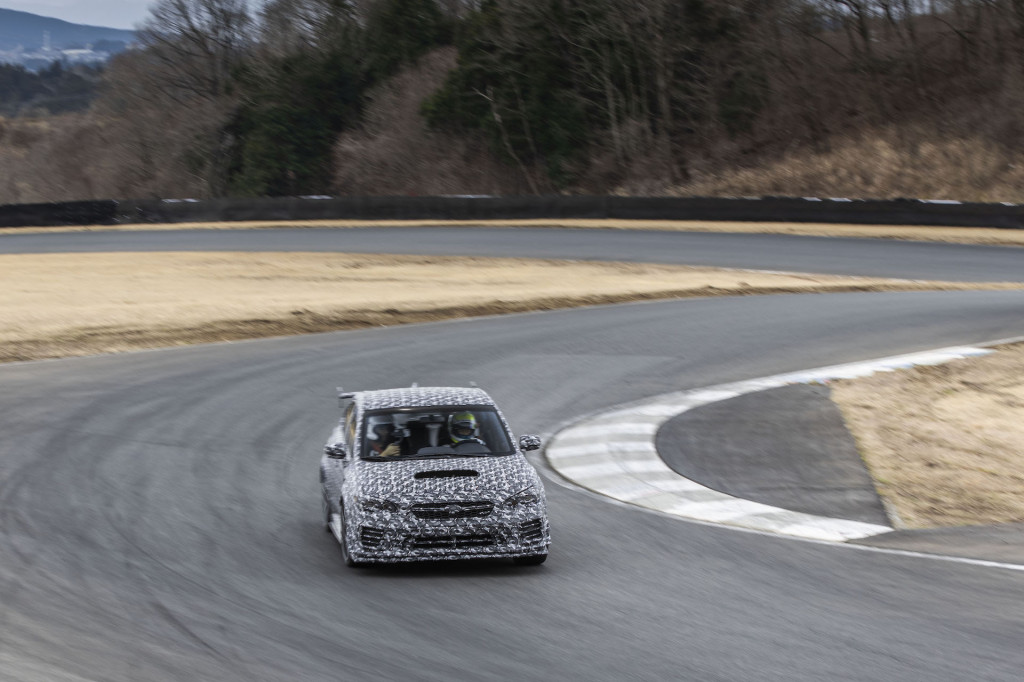 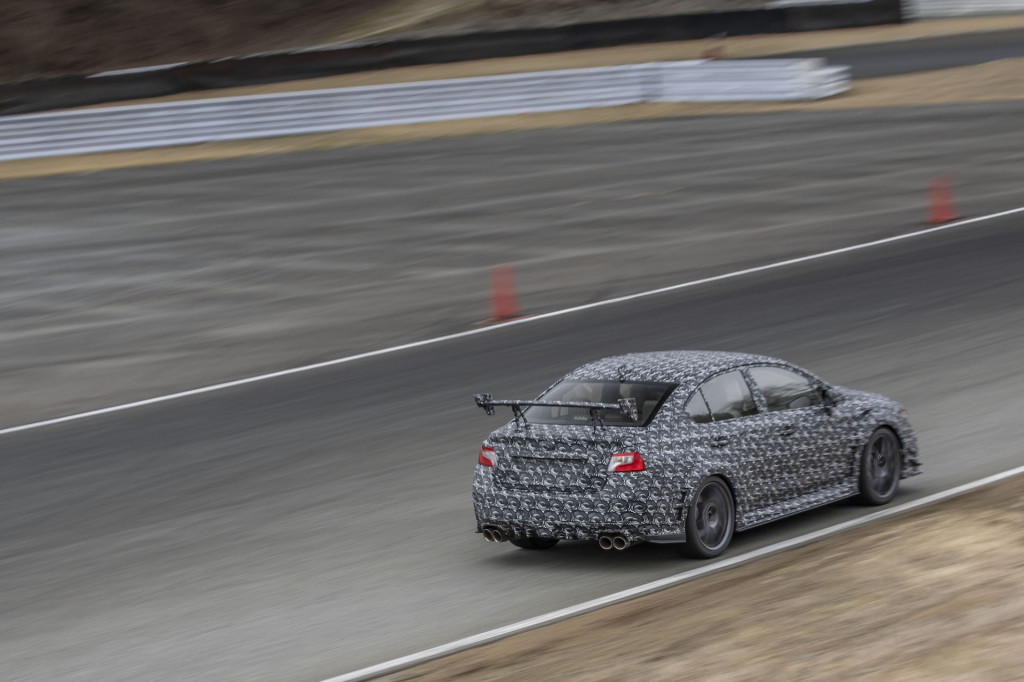 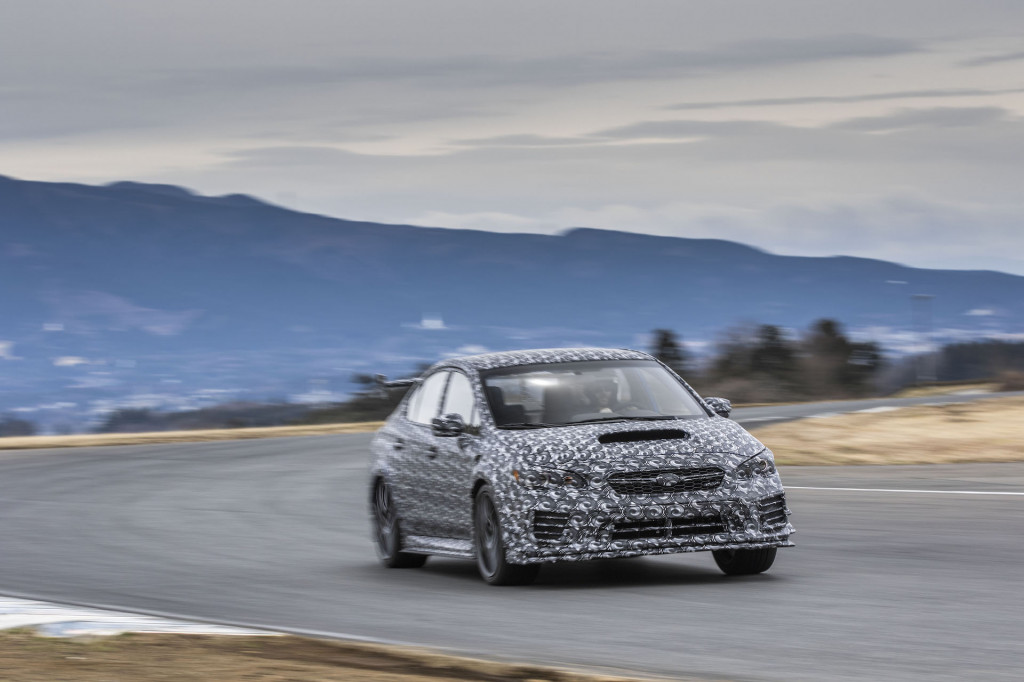 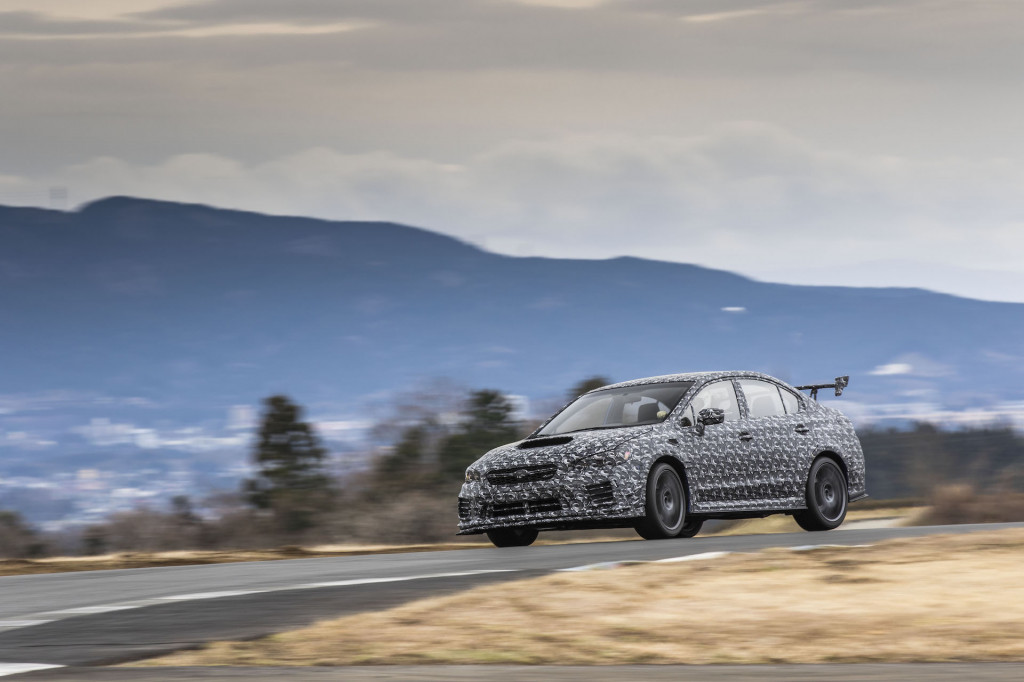 My own tension lets go as the S209 reels out of turn one, ready for one whip-crack kink after another. This ultimate WRX STI has zero chill when it comes to traction. Even though the temperatures are dropping quickly and tires are growing cold, the S209 sticks like a stalker to the asphalt, daring me to keep the right pedal planted.

Challenge accepted. The track’s small, filled with elevation changes, hard to fumble, easy to slide through while an imaginary tether keeps the S209 hooked to the ground over curbs and through the elbows that pivot the pavement back toward the pits. The S209’s a Tilt-a-Whirl, innately aware of apexes thanks to those fantastically grippy tires and faultless all-wheel traction.

It’s so unflappable, I eat up a whole first lap comparing notes with BRZs I’ve driven here while I scan the horizon for Fuji and listen to the S209’s tires sing. The short track’s simple: skid over the first curb, let the car slide off-camber into a fast line between two shallow curves, then crank it right to head uphill through another duo on to a short straight, then carry traction through a 45-degree left-hander down the longer straight. Lather, rinse, repeat.

By lap two, the S209 begs for a tighter inside line. I jam brakes and let it wag its way into both straights. In the same corner, the BRZ would be on its heels, drunk-dialing an Uber home. The S209 snaps to attention, flicks into turns and settles down, an unapologetic grip generator that would rather cook through corners on a hot set of tires than eat a hot meal. That’s where we’re different.

It’s lap three before I realize my shoebox feet can slip across the pedals better, and hit a quick second-gear dip along the way around the test track’s double handful of corners. Before I get OK with sending it over the curbs in search of a straighter line. Before I find the perfect braking point in the middle of the last turn and punch a perfectly smooth path down toward a checkered flag that sends me on a cool-down lap toward pit lane.

As far as collector’s items go, this is one to break out of the blister pack—no regrets, no apologies.

Over at the big Fuji track, a crowd still mills around the parking lot of STI history, but it begins to thin, and the scarf of clouds around the volcano turns into a cloak. Sunday traffic heading back to Tokyo’s supposed to be a nightmare, and a fact-check with Google Maps agrees. We’re done here.

Subaru says it’ll sell maybe 200 STI S209s in the U.S., split between WR Blue Pearl with gray wheels or Crystal White Pearl with gold wheels. At a sticker of about $50,000, all that’s missing is the sealed nitrogen bubble. Expect the 50th anniversary STI party to showcase one of these and for its fans to fawn over it while they slurp hot ramen and try to stay warm in the chill of an early spring day.

Maybe by then, I’ll be part of the cult too. If I’m not already.

Subaru flew us to Tokyo to drive the STI S209, and paid for our hotel and for these little sweet tea cakes with a bird on the package, because they know we’re major Portlandia fans.