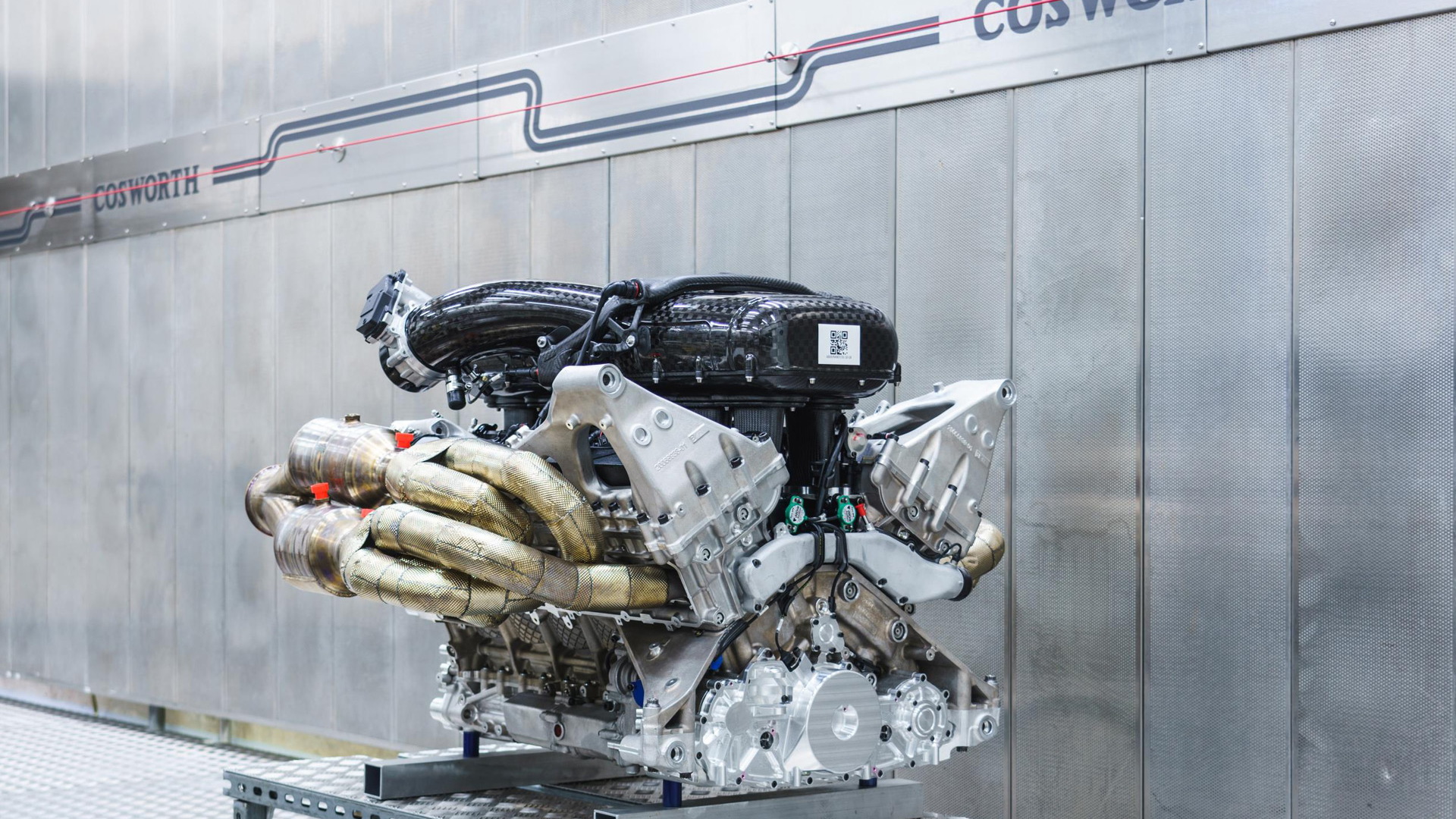 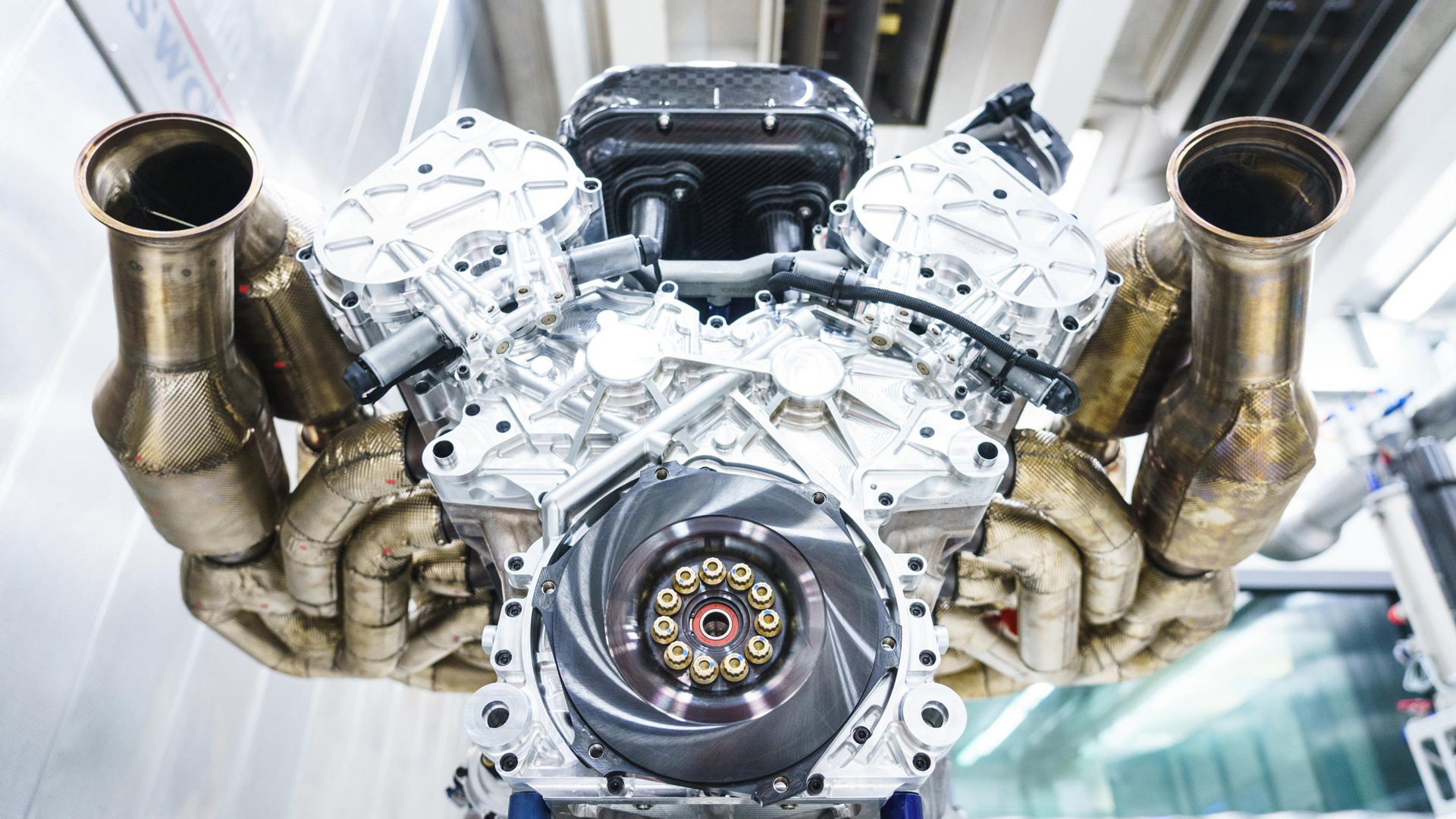 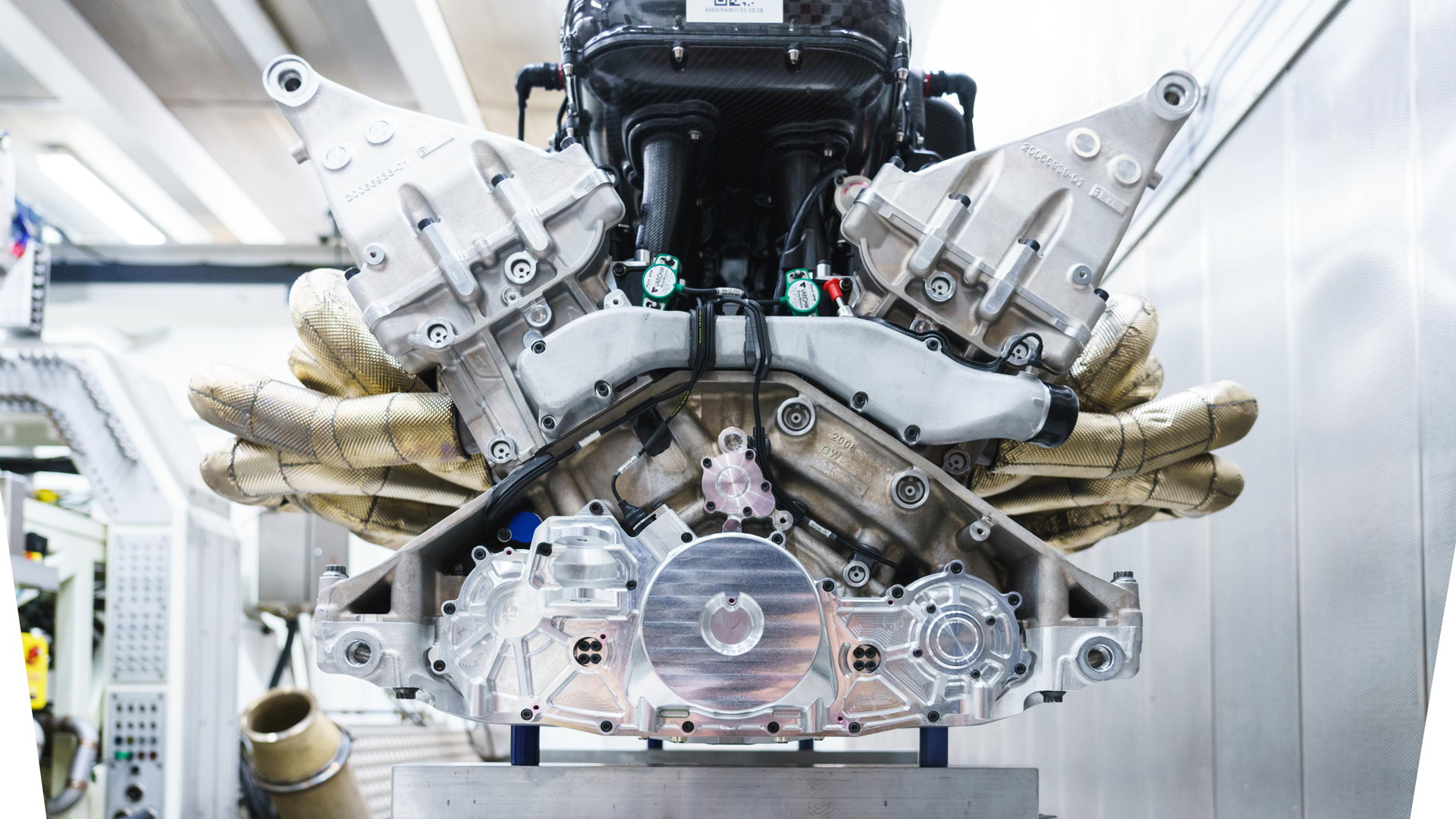 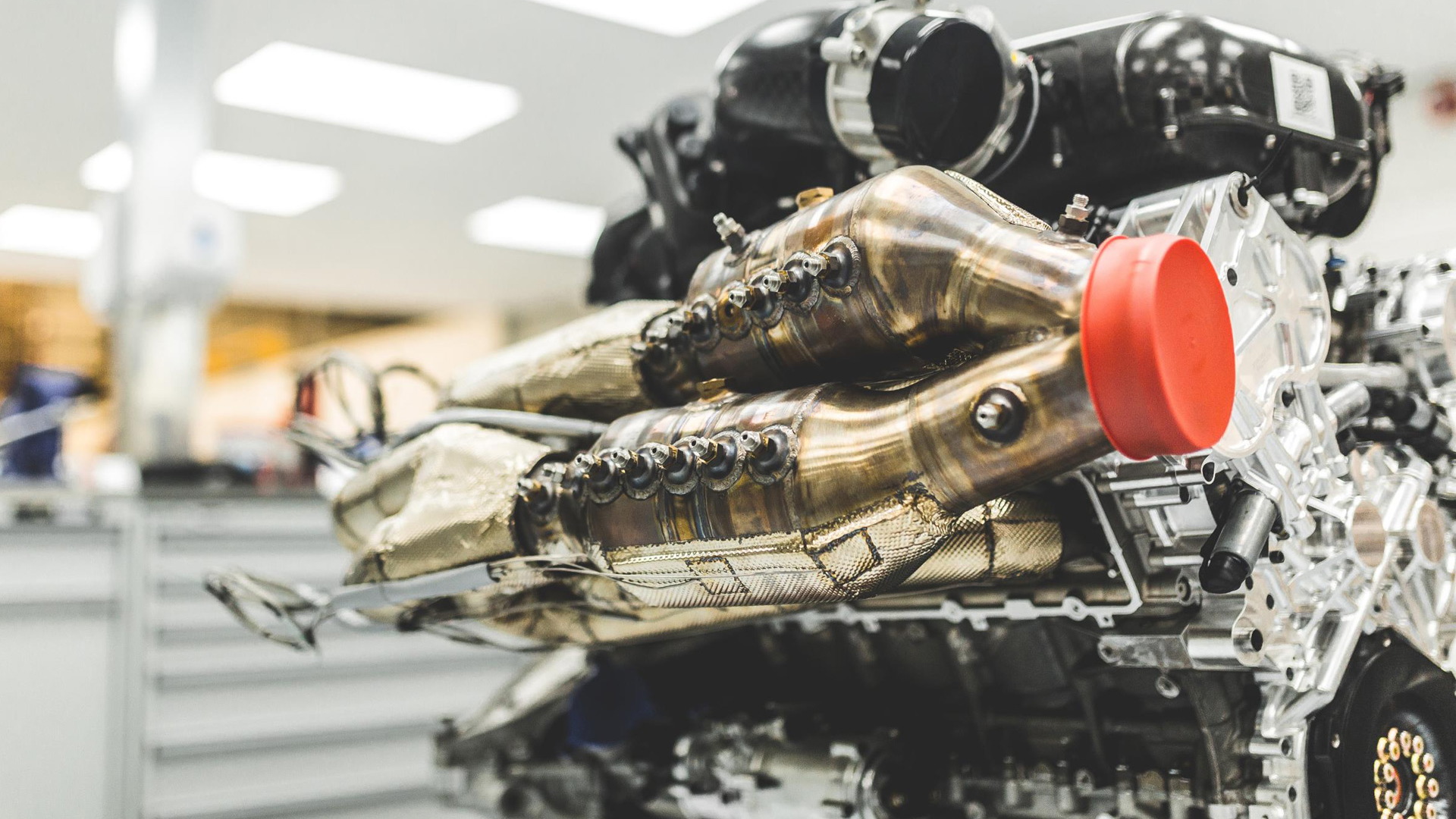 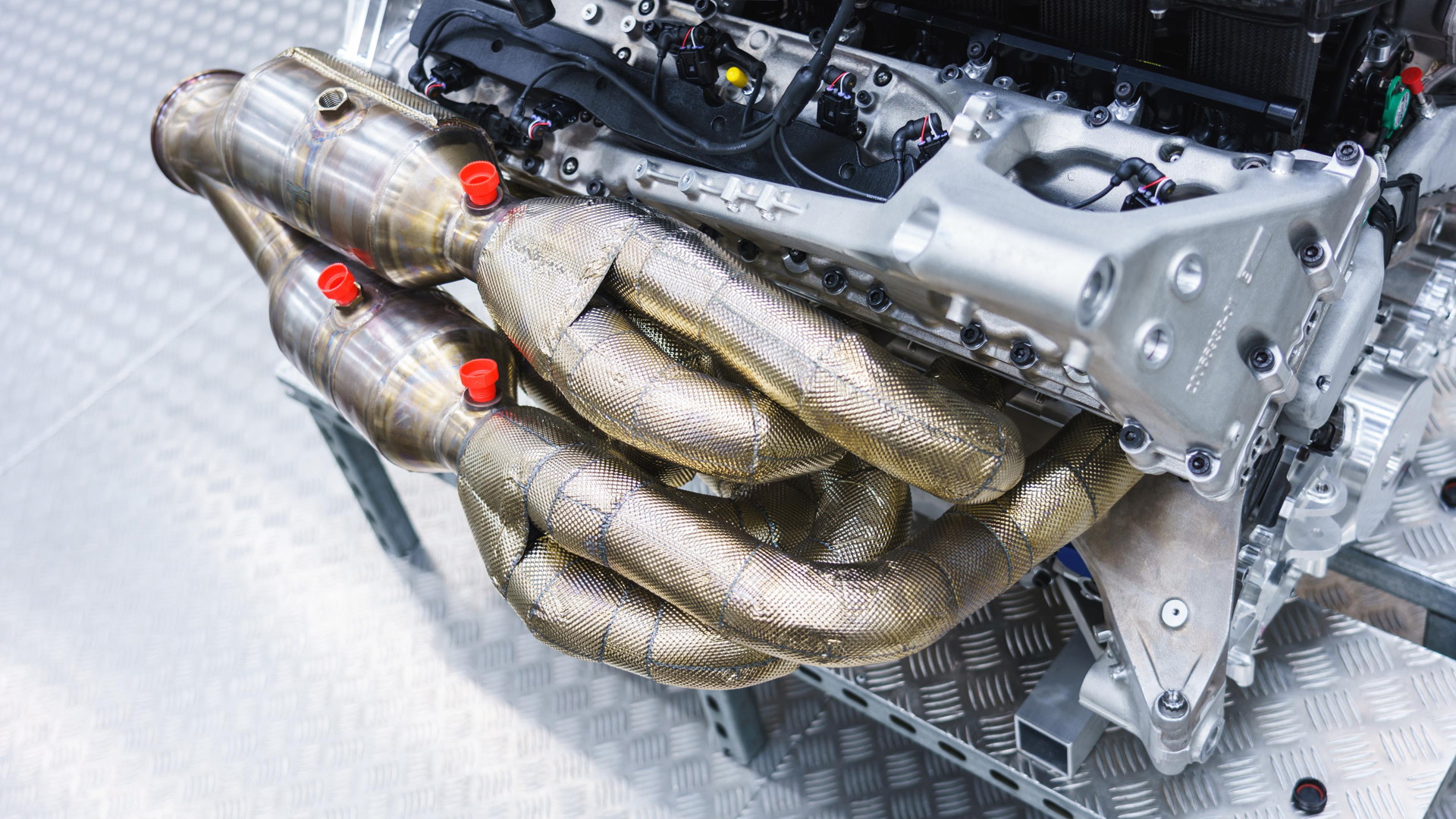 Aston Martin on Wednesday gave us our first look at the mighty V-12 engine that will power its Valkyrie hypercar due next year.

The engine is being developed by Cosworth, a fellow British firm that has supplied a number of race-winning Formula 1 engines over the years, and it is destined to be the most powerful naturally aspirated mill ever fitted to a production car.

Aston Martin has confirmed a peak output of 1,000 horsepower and 545 pound-feet of torque. That's lower than the 1,130 hp that Cosworth hinted at in August but still an incredible feat considering the lack of forced induction. And the final output of the Valkyrie will be higher still as electrification expert Rimac is developing the car's hybrid system, more details of which will be released at a later date.

The V-12 features a displacement of 6.5 liters and cylinders banked at 65 degrees, allowing it to be relatively low. The peak power arrives at 10,500 rpm and the peak torque at 7,000 rpm, and the engine will continue screaming to an 11,100 rpm redline. The sound it makes is reminiscent of an old-school F1 car.

That last bit should come as no surprise given Cosworth's history in motorsport's top echelon. In fact, plenty of F1 know-how such as materials and methods has gone into the development of the Valkyrie's engine. This is especially evident in the weight.

Aside from the major castings, namely the block, cylinder heads, sump and structural cam covers, the majority of the engine’s internal components are machined from solid material. These include titanium conrods and F1-spec pistons. The result is an engine that weighs just 454 pounds. By way of comparison, Cosworth’s 3.0-liter F1 V-10, the last before weight limits were imposed, weighed 213 pounds. However, it would weigh closer to 462 pounds if scaled-up to match the 6.5-liter displacement of the Valkyrie's V-12. Valk customers will even be able to opt for a lack of clear coat on the engine's carbon fiber intake to save precious ounces.

Given the engine is a fully stressed element of the car (the carbon fiber tub mounts to the front, while the transmission and rear suspension mount to the rear—just like in an F1 car) and the level of technology in the combustion system, keeping weight down was a major headache for the engineers. Emissions were another issue, with port rather than more advanced direct fuel injection being used, a move that enabled performance targets to be met without the use of gasoline particulate filters.

Unfortunately, the high-strung nature of the engine means major service intervals will be shorter than for most performance cars, even exotics. Cosworth Managing Director of Powertrain Bruce Wood told Car and Driver in an interview published Wednesday that the engine is projected to last about 62,000 miles, at which point it will have to be rebuilt.

"The reality is that if anybody got to that point, we'd take the engine out, strip it, and crack-test it,” Wood said. “If the block was fine and not excessively worn, there would be no reason not to rebuild it with new pistons and valves."

The engine in the Valkyrie's Mercedes-AMG One rival is also expected to have a limited lifespan. We'll remind you that the One's engine is actually the same unit used in Mercedes-AMG's current crop of championship-winning F1 cars, in this case a tiny 1.6-liter turbocharged V-6.

Valkyrie project leader Adrian Newey, Red Bull Racing’s star F1 aerodynamicist, in August explained the rationale behind the decision to go with a big V-12. He said a turbocharged V-6 was originally looked at but the V-12 was eventually picked because of what it allowed the design team to do in terms of using the engine as a structural component, since V-12s are very well-balanced engines with good NVH characteristics. And weight wasn't an issue as the V-6's turbo system, including all plumbing and intercoolers, would make the engine weigh the same as the V-12.

Deliveries of the Aston Martin Valkyrie will start next year for the road car and 2020 for the track-only AMR Pro version. Aston Martin will build just 175 Valkyries all up, of which 25 will be AMR Pros, and yes all build slots are sold.