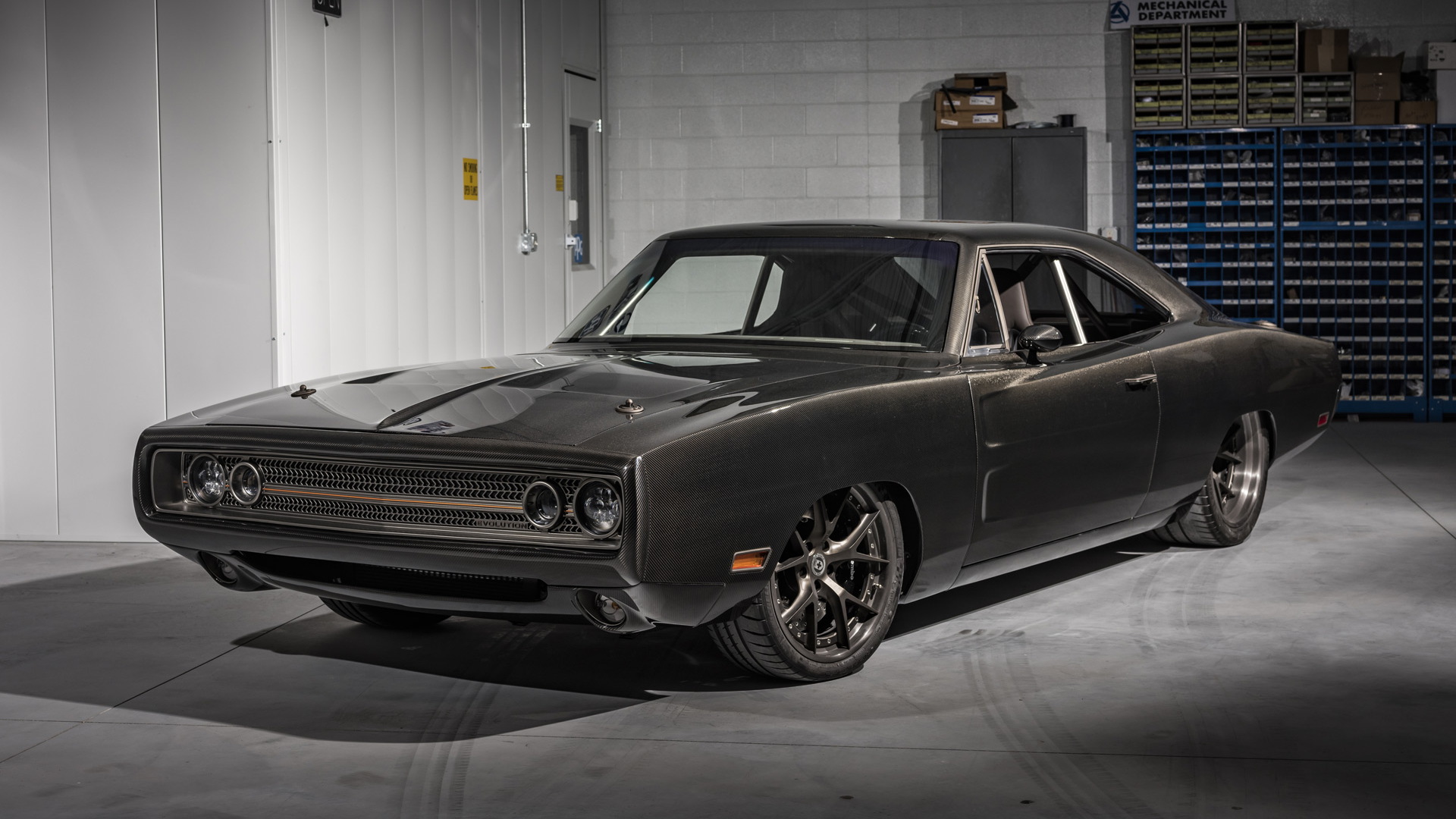 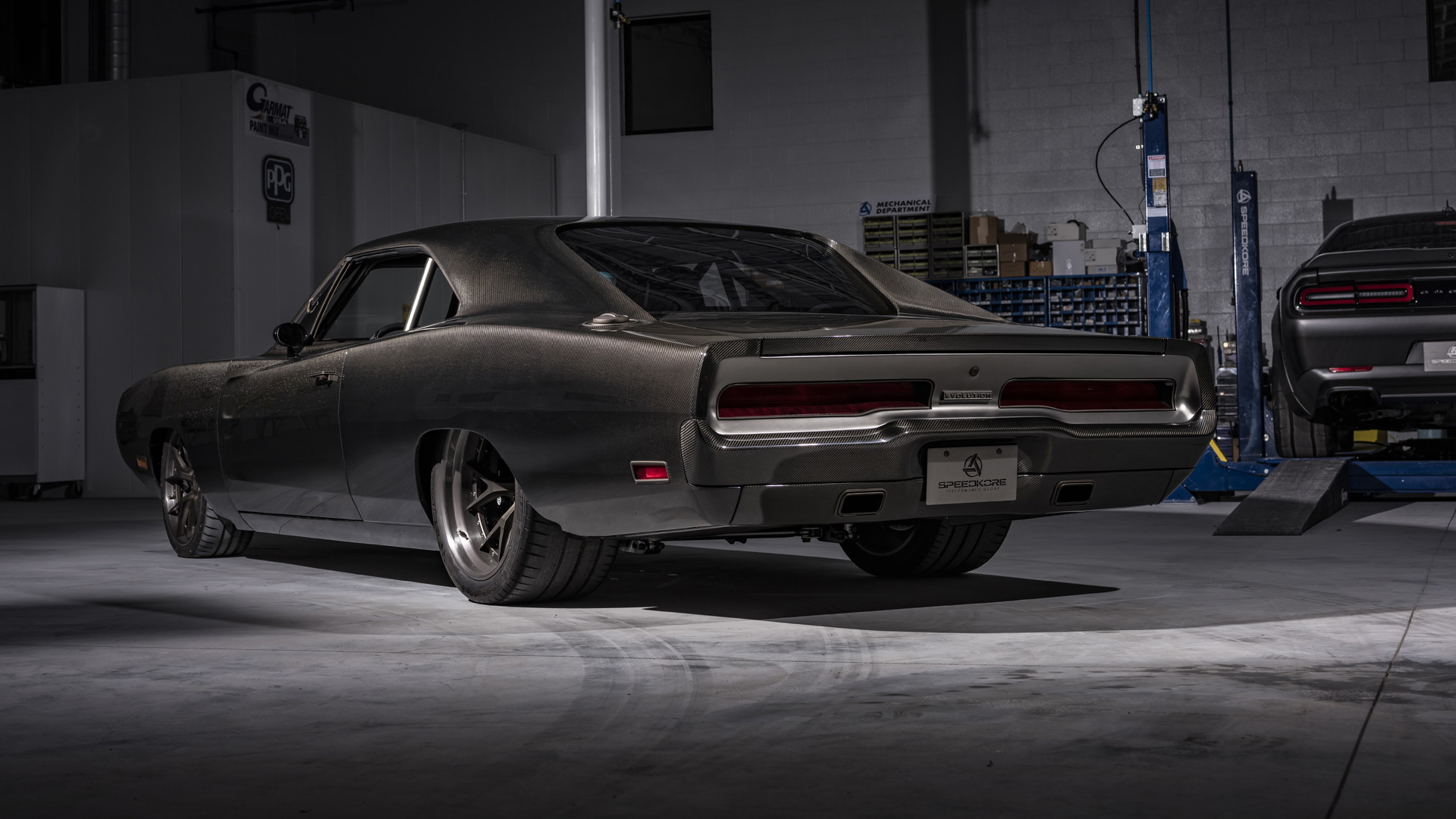 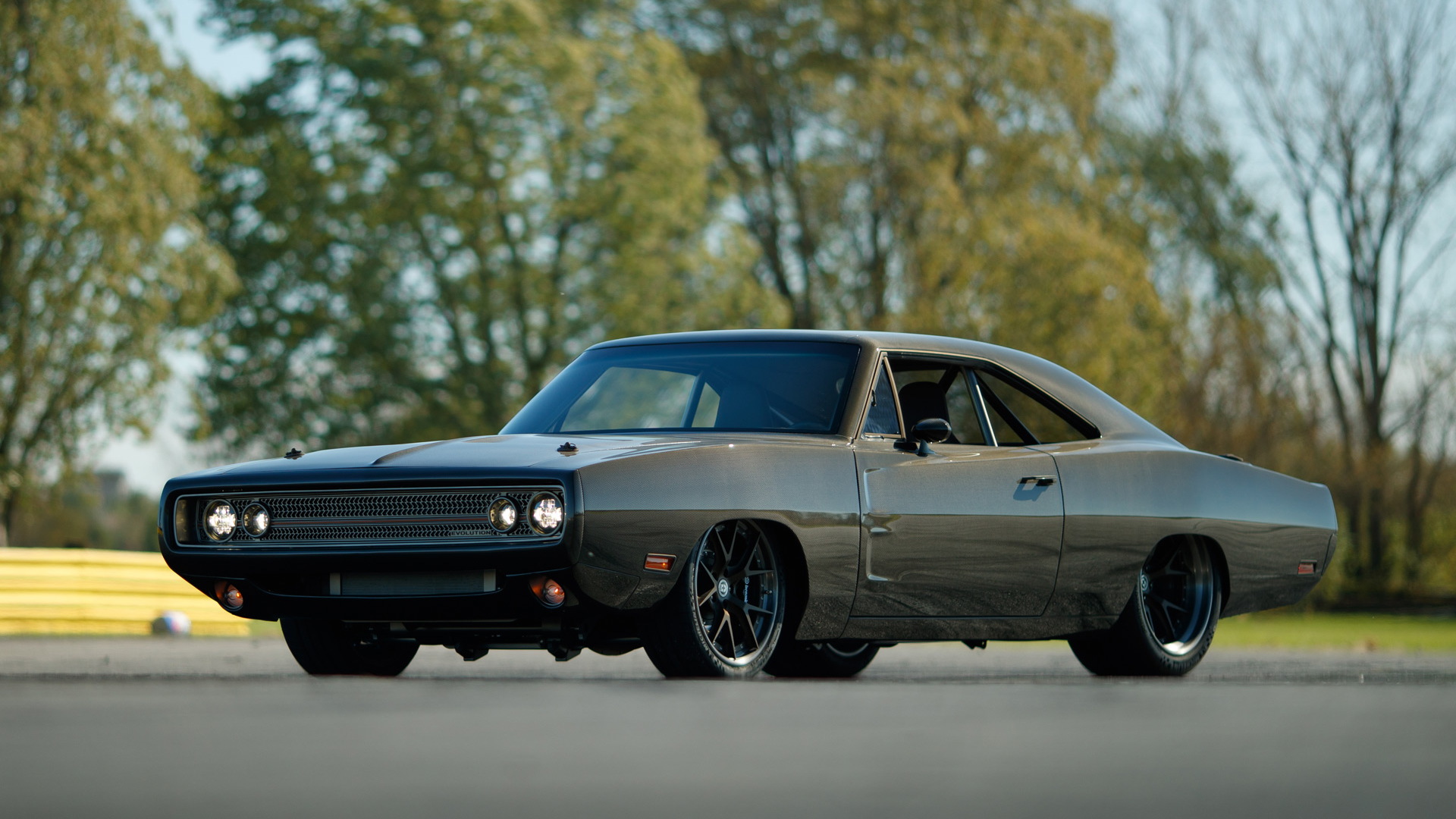 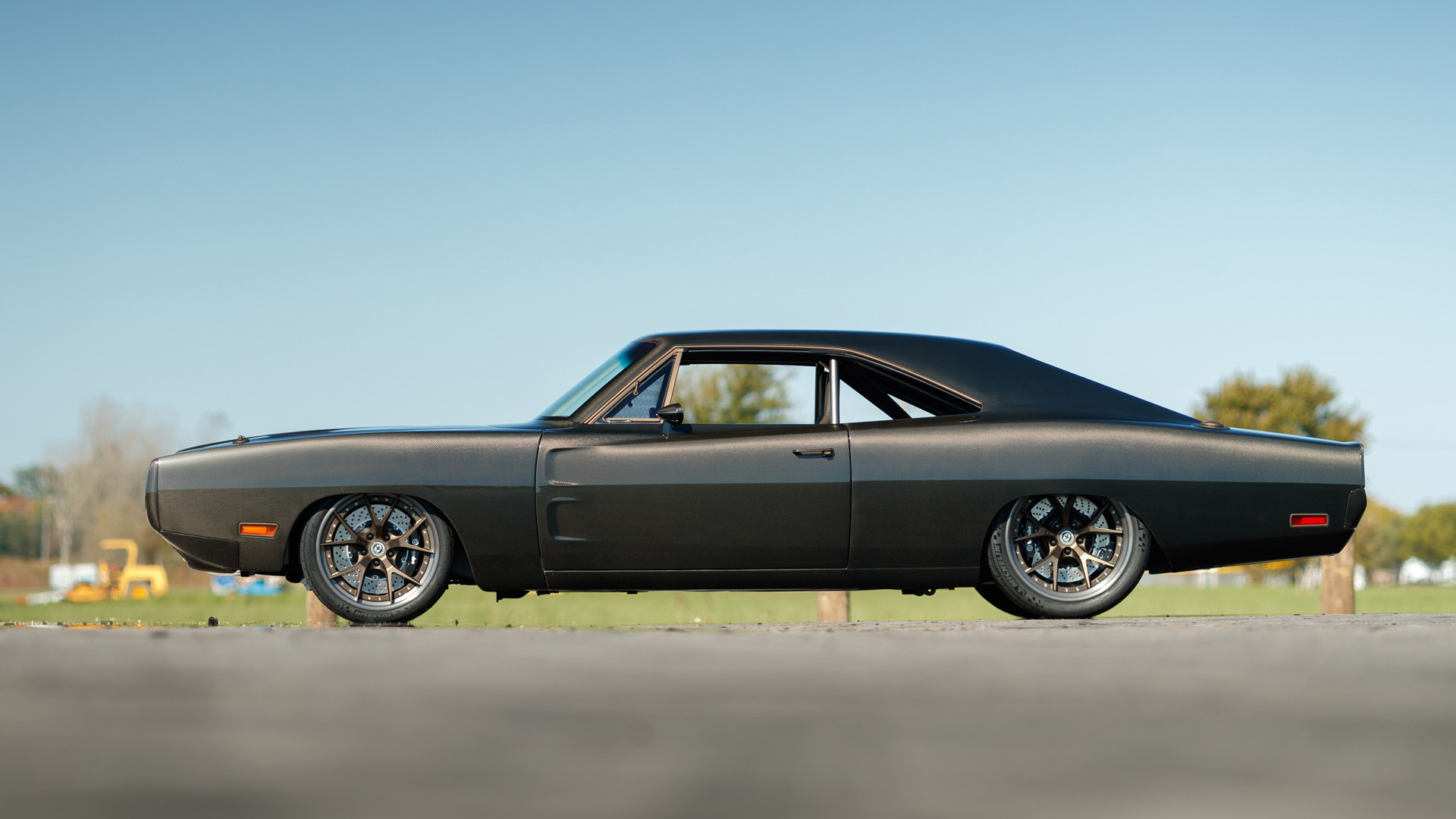 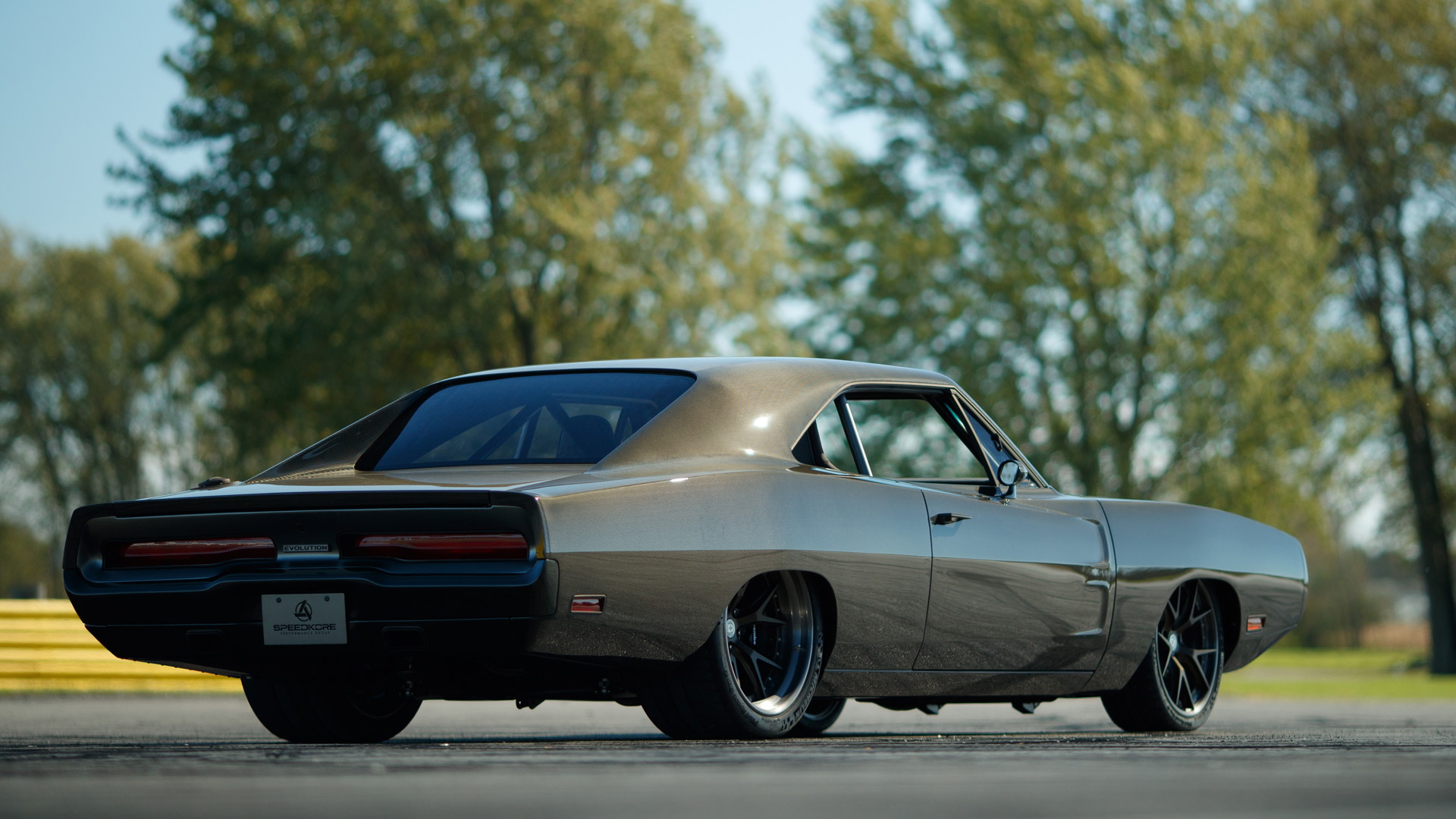 Imagine a 1970 Dodge Charger with all of the best modifications imaginable thrown in. The result, we'd wager, would be something close to SpeedKore Performance Group's Charger Evolution unveiled Tuesday at the 2018 SEMA show.

It's a carbon fiber-bodied beast with a V-8 borrowed from a 2018 Dodge Challenger SRT Demon, only with power dialed substantially higher.

Classic Chargers have soared in value, thanks in part to "The Fast and The Furious" franchise, so SpeedKore, using lessons learned from its previous Charger Tantrum build, decided to build this car from scratch.

SpeedKore starts with its own frame and cage, on which sits a 1970 Charger body completely crafted from carbon fiber, a speciality of the Wisconsin-based firm. The lightweight material was chosen to ensure the build met a 3,200-pound weight target.

The only parts on the exterior that aren't carbon fiber are the door handles, fuel cap and grille, which have all been machined from billet aluminum. The wheels, meanwhile, are a set of HREs measuring 19 inches up front and 20 inches at the rear. The chosen tires are Michelin Pilot Sport 2 tires measuring 245/35 front and 345/40 rear.

“Carbon fiber is one of our in-house specialties,” SpeedKore President Jim Kacmarcik said. “We do everything from full body conversions to individual panels and accessories, as well as our late-model [original equipment] upfit packages for the latest Ford Mustangs and Dodge Challengers.”

SpeedKore also brought a carbon fiber-bodied Demon to SEMA (shown above). Tuned to deliver 1,203 horsepower at the wheels, SpeedKore's Demon is now the quickest in the world, having ran 8.77 seconds in the quarter-mile.

Its Charger Evolution is tamer, but only slightly. The 6.2-liter supercharged V-8 of the Demon has received an upgraded drive pulley, fuel injectors, cold-air intake, custom stainless steel exhaust headers and full system with SLP mufflers, Dailey Engineering dry sump, upgraded oil cooler, Saldana radiator, and custom engine management tuning. The result? A heady 966 hp at the wheels. That's up from 840 hp that the engine normally produces at the flywheel.

And inside the car, you'll find a 14-point roll cage plus a custom dashboard, center console, steering column, shift bezel, pedal assembly, pedal covers and fuel cell. Most of the surfaces are also formed from carbon fiber, while leather trim is used elsewhere, including on the Recaro front seats.