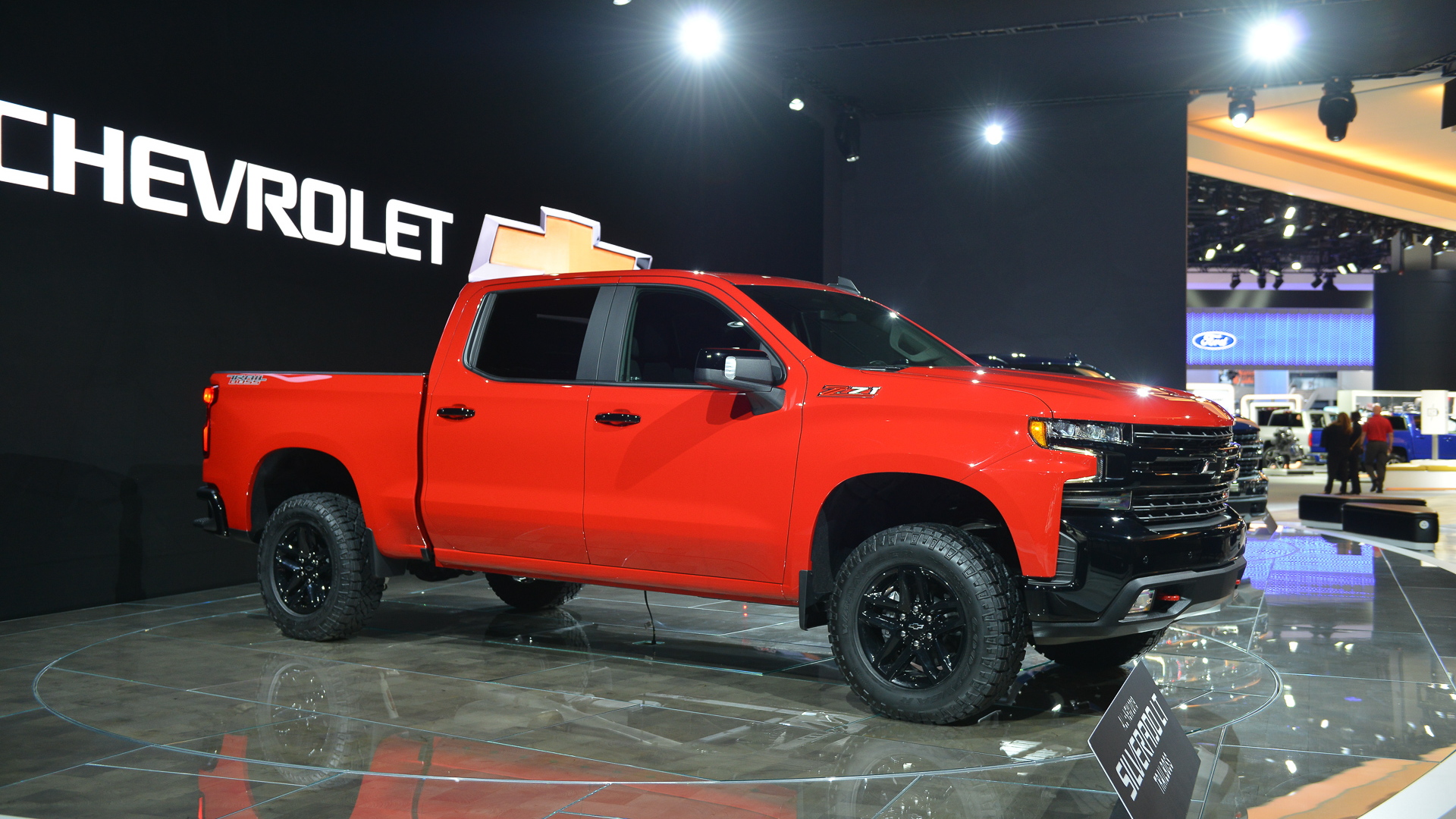 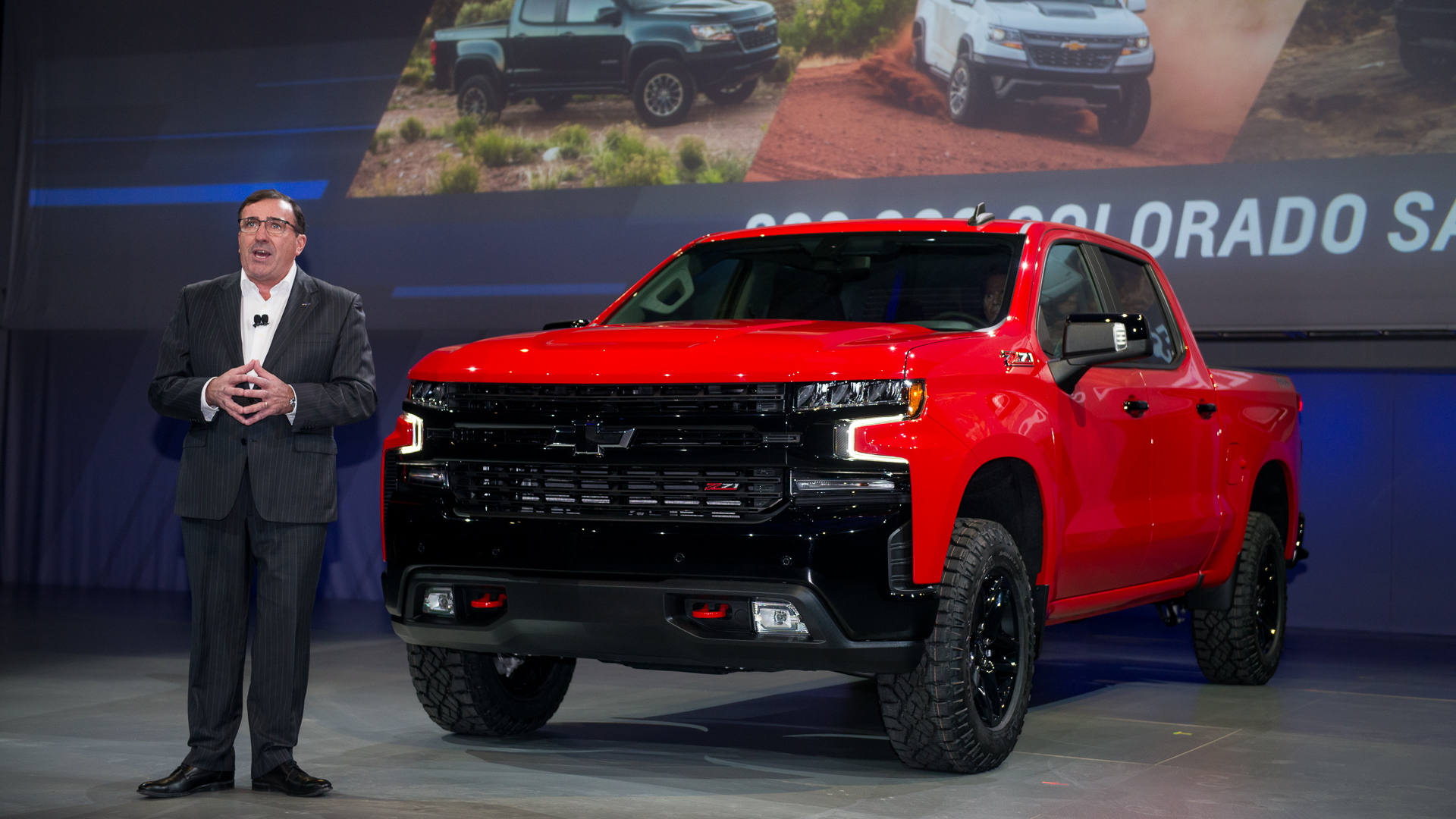 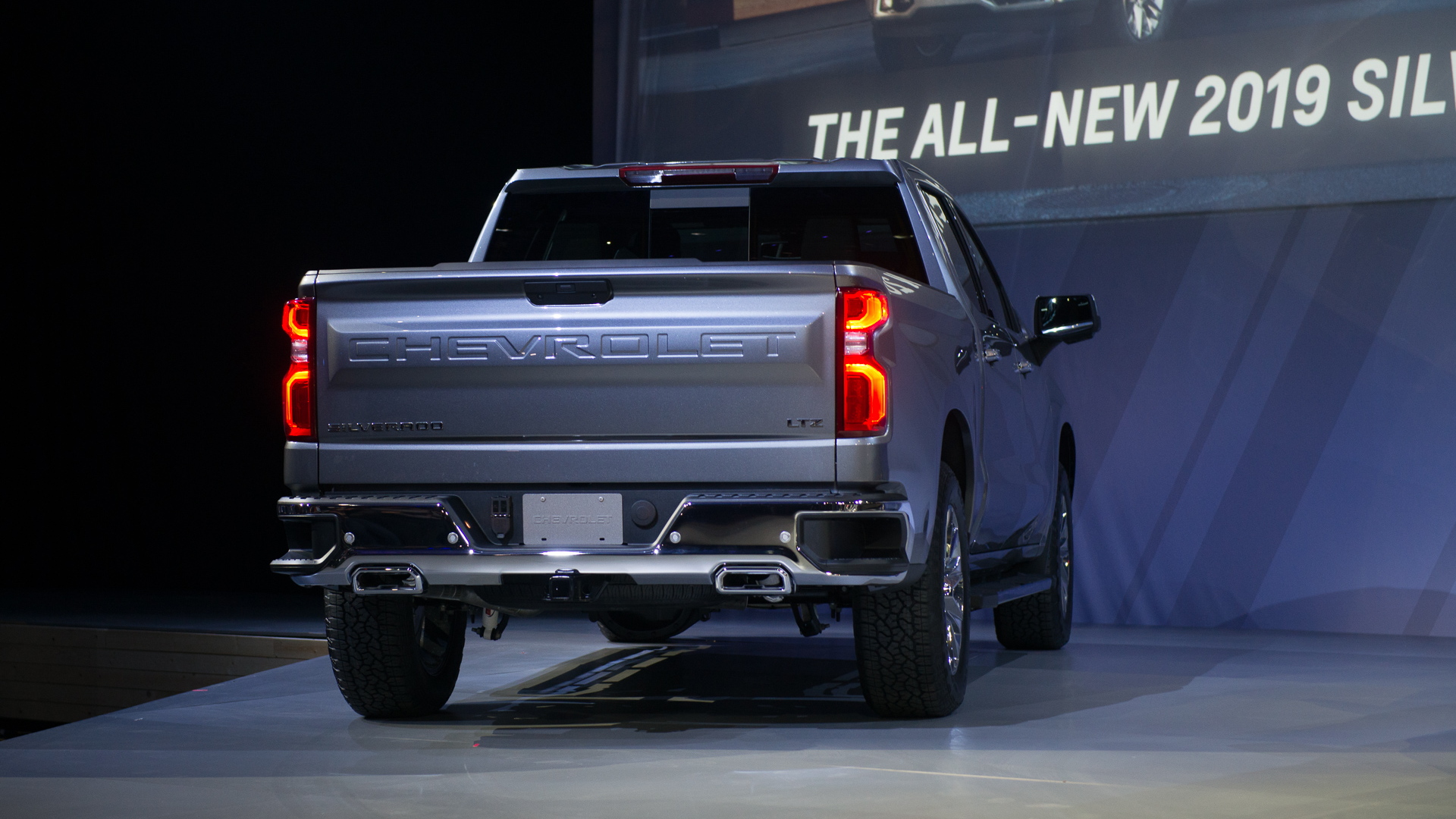 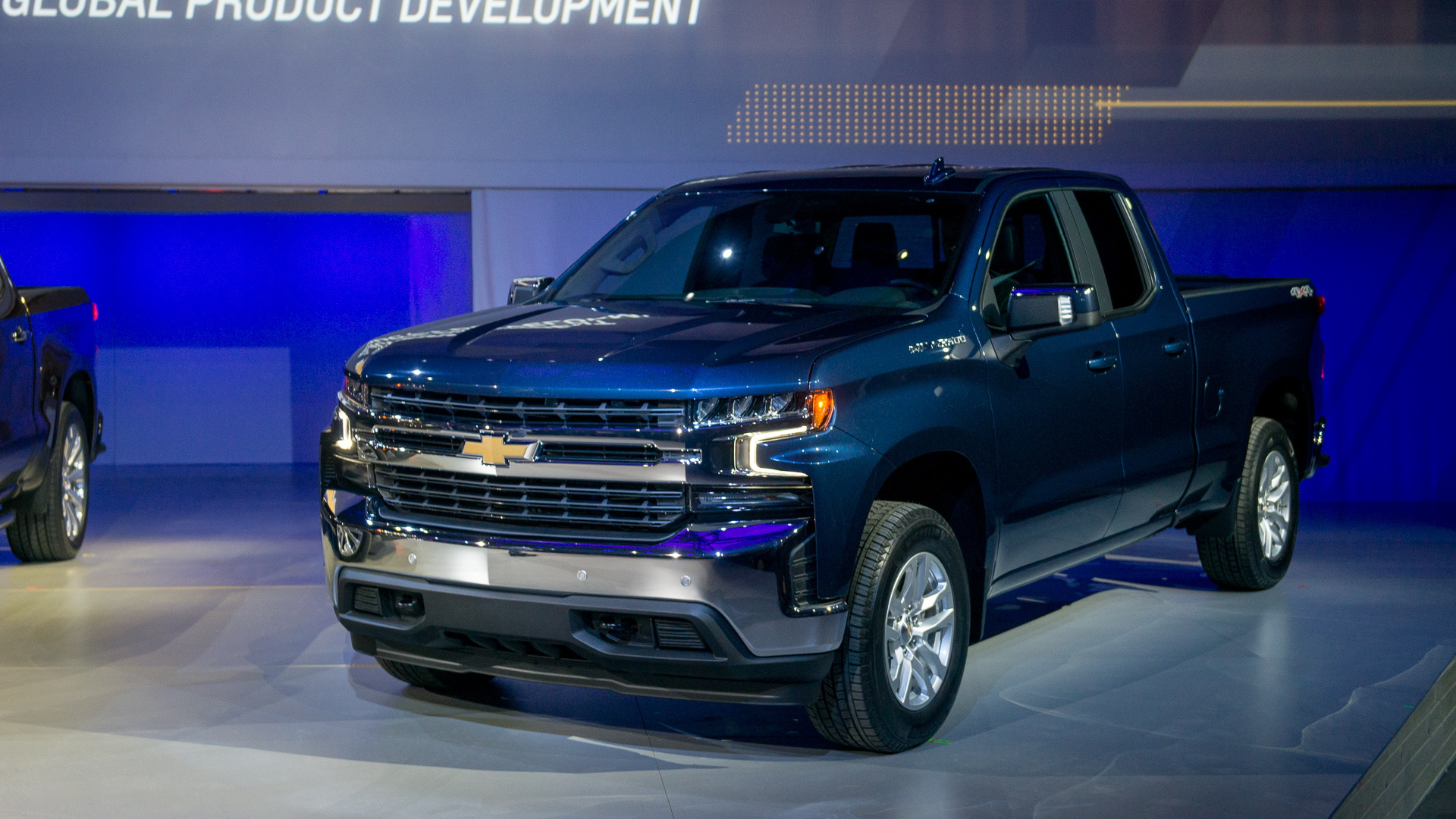 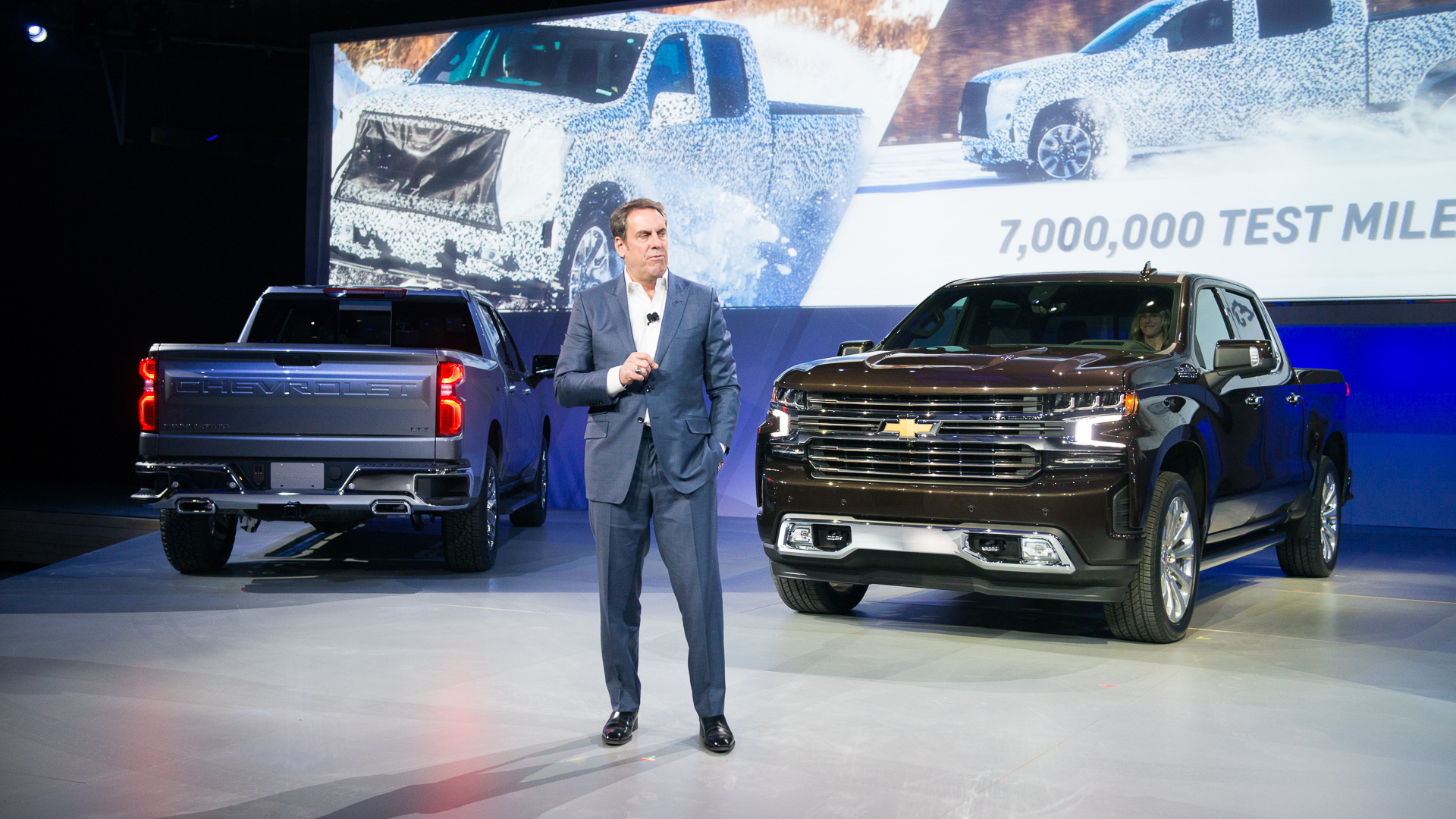 It was a helicopter that delivered our first look at the 2019 Chevrolet Silverado 1500, but General Motors' best-selling pickup was really delivered on the wind of change.

The new Chevy Silverado pickup broke cover Saturday night ahead of the 2018 North American International Auto Show in Detroit and gave us our first in-depth look at the next-generation truck.

Along with sharper lines and shaplier sheet metal, the Chevy Silverado boasts more fuel-saving features than the last iteration, starting with a diet that shed 450 pounds from the overall mass. An available 3.0-liter turbodiesel will be available in the Silverado 1500, officials said.

Engineers at Chevy used weight-saving materials throughout the pickup, including seven different types of steel for the safety cage around the passengers, and a higher grade of roll-formed steer for the bed, which is nearly seven inches wider inside. Chevy also used aluminum in the hood, doors and other small panels to shed more weight for better fuel efficiency.

Under its skin, the pickup uses 80 percent high-strength steel in its fully boxed ladder frame for weight savings off 88 pounds and a 10-percent stiffer body.

CHECK OUT: 2019 Chevy Silverado: how a big, thirsty pickup gets more fuel-efficient

Like the current pickup, the Chevy Silverado will be available in myriad configurations, including regular cab, extended cab, and four-door crew cab, with short and long beds among them. All body styles ride on 3.9-inch longer wheelbases and are 1.6 inches longer overall. Last week, Chevy announced it would increase production of its crew cab body style to meet buyer demand.

The bed will offer up to 21 tie-downs, including 12-fixed tie-downs that can each handle 500 pounds and nine movable tiedowns. An industry first power tailgate will also be offered, as will, LED task lighting, a 120-volt power outlet, and larger versions of the rear bumper's corner steps.

A new inline-6 turbodiesel will be offered in the Silverado, which Chevrolet will brand Duramax. Officials at GM didn't disclose power or fuel economy figures but said the diesel engine would be among the tops of its class, likely in horsepower, torque, and fuel economy. Competitors now consist of Ram and Ford.

Two V-8 engines return to satisfy traditional truck buyers looking for a V-8 rumble. Chevrolet said the 5.3-liter V-8 and 6.2-liter engines will be offered in the Silverado and would include cylinder shutdown technology that could deactivate from one to seven of the truck's eight cylinders.

Officials at Chevrolet said that the Silverado would be available with six different engine and transmission combinations, including the 6.2-liter V-8 and 3.0-liter turbodiesel mated to a 10-speed automatic developed with Ford.

Chevrolet will offer the new Silverado in eight trim levels, including the new LT Trailboss version that made its debut in Texas. Other trim variants consist of Work Truck, Custom, LT, RST, LTZ, Custom Trailboss, and High Country.

The Trailboss represents the top off-roader for Chevy and sports a 2-inch factory lift, chunkier tires, and the Z71's suspension. It's Chevy's closest competitor to the Ford F-150 Raptor and Ram 1500 Rebel.

From the outside, the Chevy Silverado sports squintier headlights and an updated front fascia that changes with trim levels. The new Silverado skips the squared-off wheel flares from the previous generation and door-mounted side mirrors that should cut a more efficient hole in the wind. Engineers said the new Silverado is 7 percent more aerodynamically efficient.

The tailgate gets "Chevrolet" stamped across the back, which returns for the first time since the 1990s.

The 2019 Silverado goes on sale this summer. Pricing and additional specs will become available closer to launch.

For more on the 2018 Detroit auto show, head over to our dedicated hub.