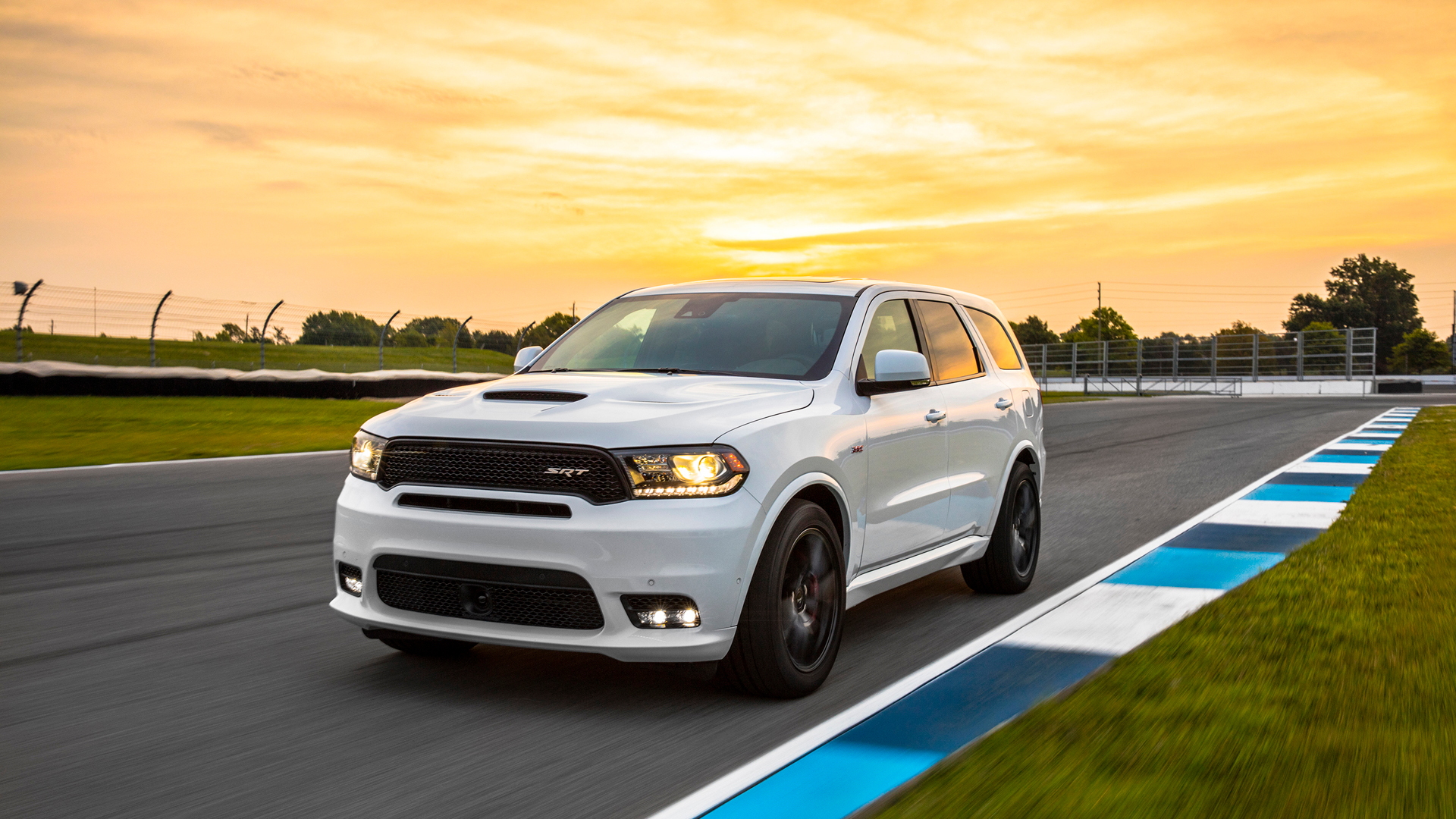 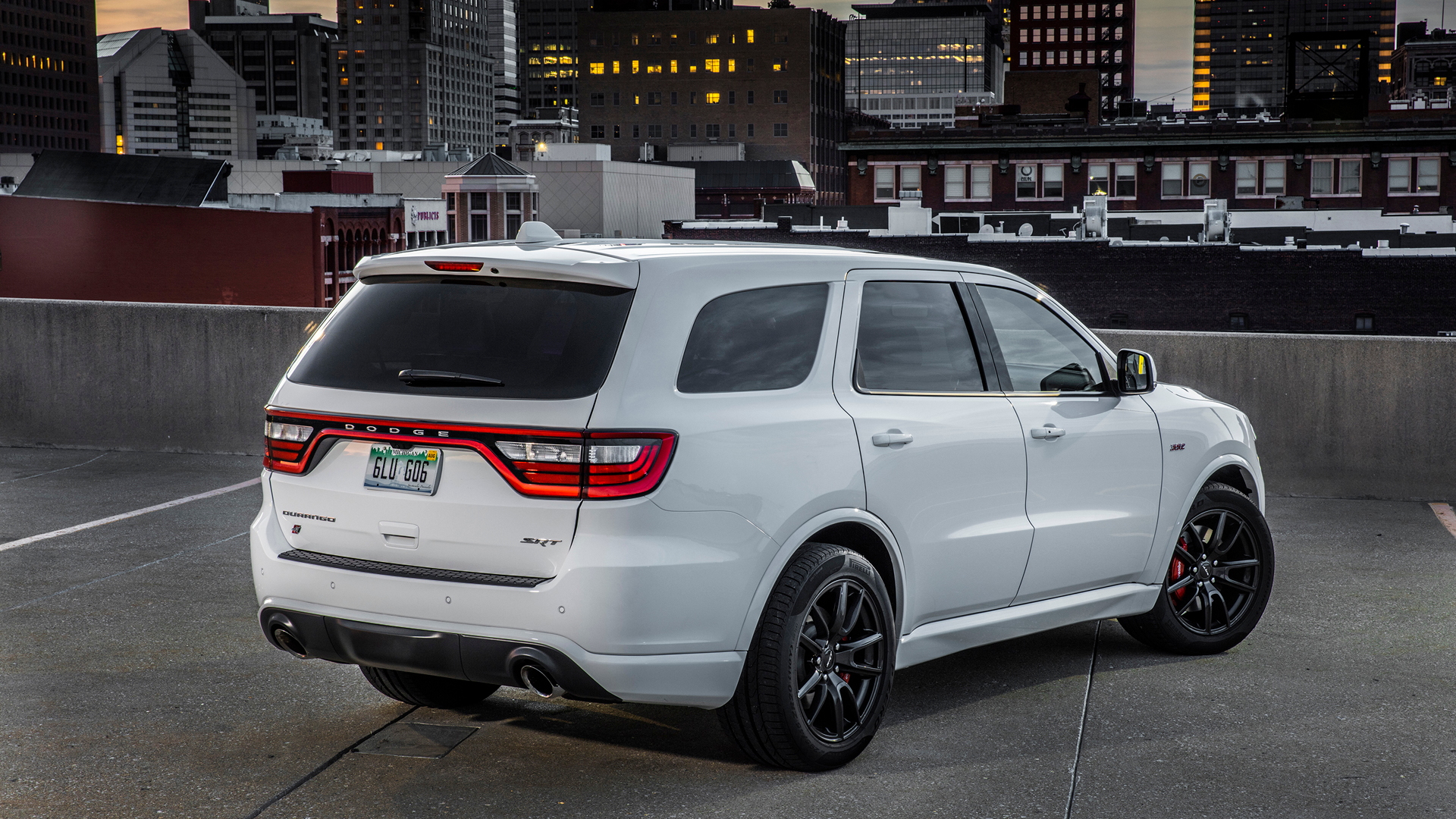 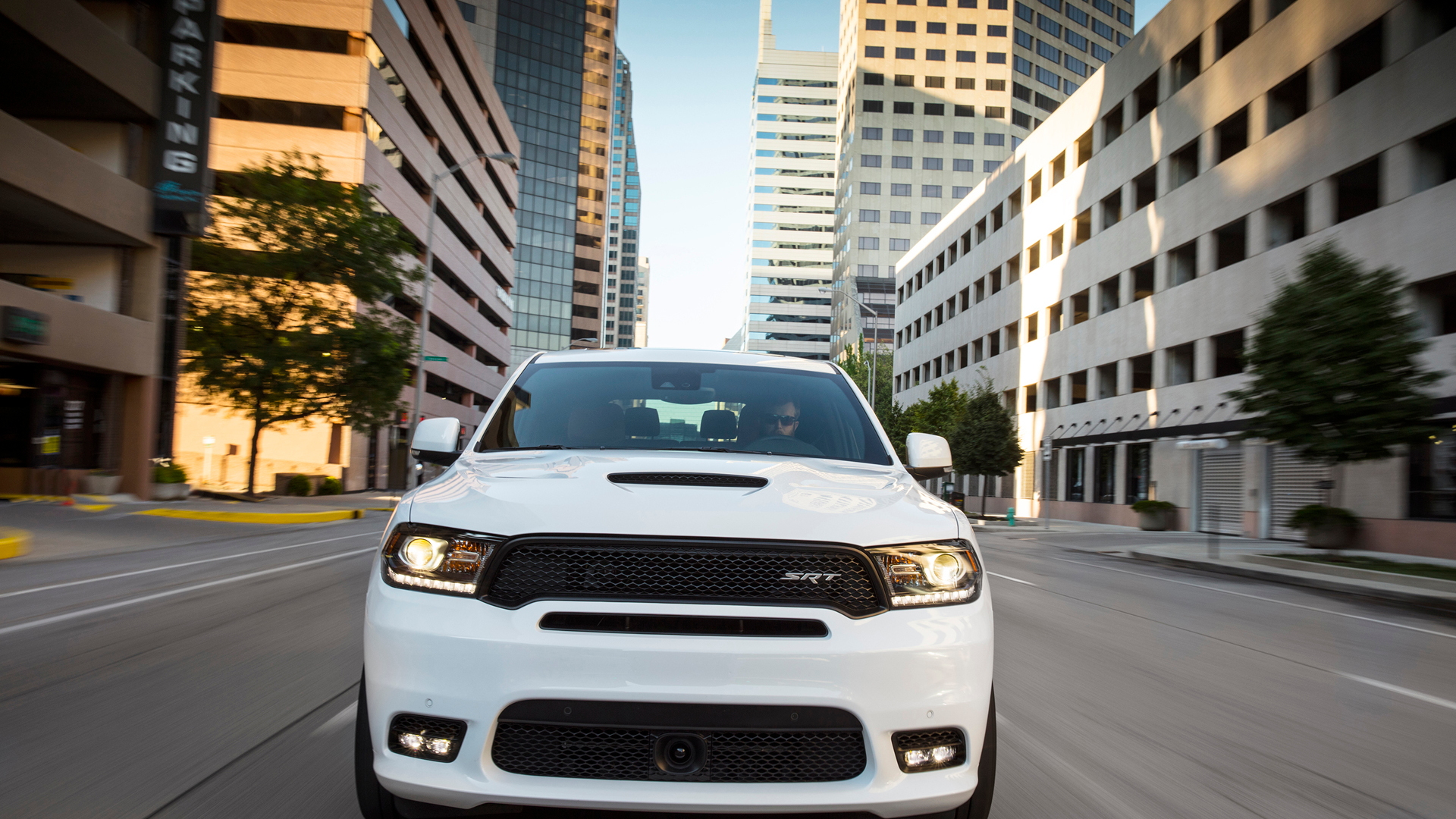 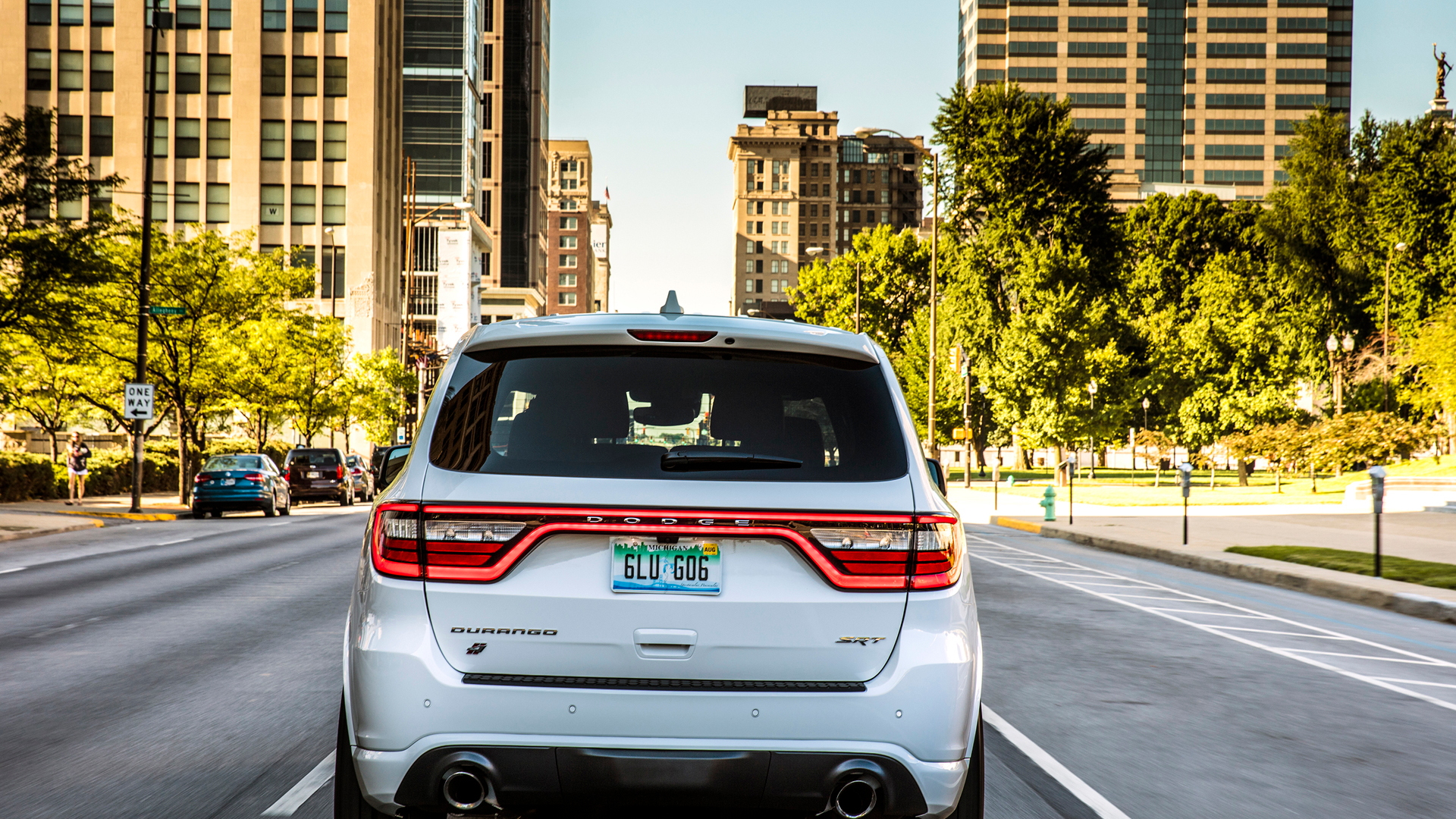 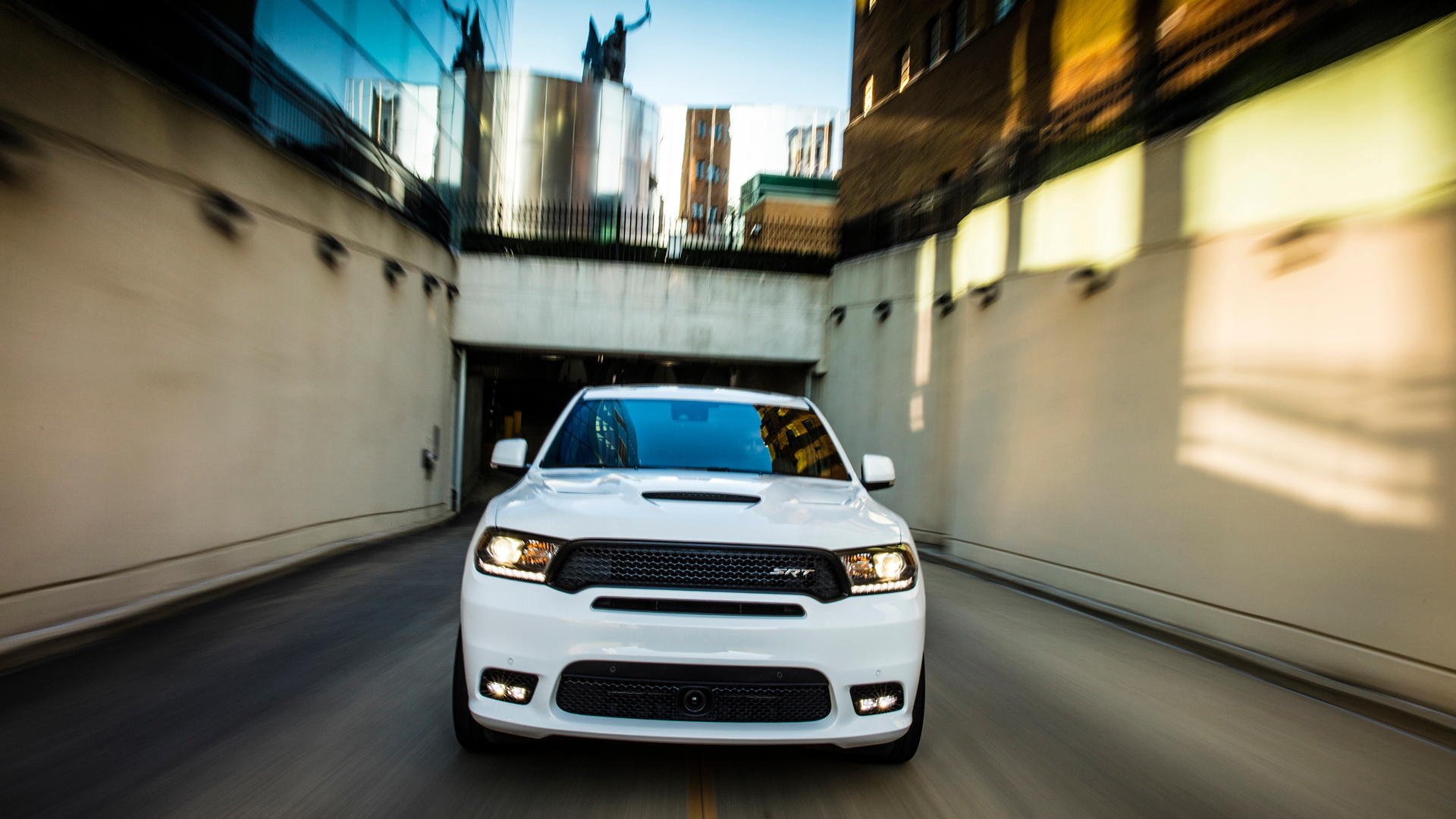 A Dodge Durango might be one of the last vehicles you'd want to drive on an angry lap of the Indianapolis Motor Speedway's in-field road course. It's a 3-row crossover SUV, designed for school runs rather than running down the front straight. And yet, I'm doing just that, thundering (the wrong way) over the yard of bricks and doing my best impression of the countless legends that have driven this same track.

But unlike the Andrettis and Foyts, the V-8 engine note echoing off the canyon-like grandstands belongs to a hulking SUV with leather-and-suede upholstery, a kick-ass sound system, and heated seats. The 2018 Dodge Durango SRT takes all we love about Dodge's in-house tuning arm—garish looks and awesome performance—and applies it to a big, family-sized SUV.

I start my lap of Indy in the pit lane, where the Durango SRT's amplified looks present an impressive figure. With flared wheel arches, unique 20-inch wheels, a scooped hood with functional vents, a blacked-out grille, and 4.0-inch exhausts, there's no mistaking SRT's work here. I select a menacing black example, open the door, and climb into obnoxious, brick-red seats.

The Durango shares its leather-and-suede chairs with the Grand Cherokee SRT. They're big and heavily bolstered, but also wide enough to be comfortable over the long haul. On the faster bends around IMS, the seats hold you tight, like you wished your high-school crush would. I put my hands on SRT's familiar flat-bottomed steering wheel—I still don't really like the tiny, oddly placed paddle shifters—and then slotted the t-shaped shifter into drive.

Like the seats and steering wheel, the Durango shares its entire powertrain with the Grand Cherokee SRT. ZF's excellent 8-speed automatic channels the 6.4-liter V-8's 475 horsepower and 470 pound-feet of torque to an all-wheel-drive system that can shunt 70 percent of the power to the rear axle. The new powertrain also increases the towing capacity to 8,700 pounds, the most of any three-row SUV, including the truck-based Chevrolet Tahoe.

An active damper system works alongside firmer front and rear springs—3 and 16 percent, respectively—and a stiffer rear sway bar, while Brembo branded brakes with 15.0-inch rotors in front have the same stopping power as a Desert Eagle. Ignore the tall body and focus on these elements, because in conjunction, they're great…mostly.

Accelerating out of the pit lane, the Durango SRT exhibits a degree of schizophrenia. The throttle response is delightfully aggressive in Track mode while the 6.4-liter sings a bassy, burly song. These are both very good things when lapping Indy's road course, but they come at the expense of public-road manners.

There, the throttle response feels over-caffeinated, even in the default Auto mode. It's hard to accelerate from a stop smoothly, or to really deploy any of the engine's power—the Durango SRT constantly feels eager, for better or worse. The engine's constant shouting grates, as well. Dodge should really offer a dual-mode exhaust to hush the Durango SRT up in everyday driving.

Dodge married Indy's old Grand Prix course with its current MotoGP course—what we were running was closer to the MotoGP route, but we ran clockwise, like Formula One did.

Turns 16, 15, and 14 are a difficult complex made tougher by the heavy braking required after screaming down the front straight. It's where the Durango's 5,500 pounds and occasionally loose steering are most apparent, with the side-to-side rolling testing the stiffer rear sway bar.

I have the Dodge's active dampers in their firmest setting—Track—which helps keep things poised. Still, this is the most demanding part of the track for such a large vehicle.

Clear the first three turns, and the track begins to open up. Turn 14 lets the driver use the overactive throttle and standard all-wheel drive to call up all 475 hp and 470 lb-ft of torque with little concern for the amount of traction. Aim purposefully wide at the end of the short chute that leads into turn 13, because it positions the vehicle better for the short few straight leading into 12.

The next sequence is something of a neck bender and gives an idea of just how good a job Dodge did tuning the Durango's suspension—the long turn 11 has an apex that feels like it will never come, demanding the driver stay wide, wide, wide until finally turning in at the last minute. The suspension rolls progressively here, restoring some of the confidence the confusing Turns 16 through 14 took away.

It's also easy to interpret feedback from the big, 295/45/20 Pirelli tires, and through the steering. The latter is too light and too slow for a 5,500-pound vehicle, but there's at least as much feedback here as there is in a Challenger.

Up until this point, the transmission stays in the lower gears, executing single upshifts or downshifts as the situation necessitates. But properly negotiate turn 10 by getting on the throttle much earlier than you think you need to, and it's time for the engine and transmission to stretch their legs.

The Hulman Straight is the second longest on the Indy road course, making it the natural home for the Durango's 6.4-liter V-8. Exiting turn 10, torque arrives by the bucketful, even lower in the rev range. Dodge quotes a torque peak of 4,300 rpm, but it feels like all 470 lb-ft are willing to arrive much earlier if you squeeze the throttle in just the right way. But while low-end performance is striking, it's the relentless acceleration from the Hemi that's most addicting.

The Durango SRT is easily into the triple digits by the end of the roughly third-of-a-mile straight and is still accelerating hard by the time the 500-foot cone pops up. Call on the huge Brembo brakes and it's easy to scrub that speed off before making a sharp, almost-90-degree left onto what's officially the MotoGP circuit—everything up until this point has been the same as the F1 course.

It's at this point that the loose steering starts to make good. Turn in is sharp for such a large vehicle—the Durango SRT can change directions rapidly, which is good on such a tight bend that requires drivers to bleed so much speed. Hit turn 9 correctly, and you'll feel through the steering the rumble strips that signal the inside of the turn.

The next sequence is the start to the main straight. A gentle right—turn 8—encourages drivers to carry speed out of turn 9, while turn 6 punishes such foolish exuberance with another near-90-degree bend. The 6.4-liter V-8 and the super-quick shifts of the 8-speed automatic become an enemy here, as you almost always end up entering the turn with too much speed and blowing past the apex—I did. A gentle, fast right—turn 5—is the entrance to the oval between Indy 1 and 2. And then, it's my favorite section of track.

Turns 4 and 3 are deeply entertaining late apex bends that require a very precise line to negotiate properly. The driver is constantly fighting the Durango's weight, trying to maintain speed while purposefully running wide. Turn in hard and the steering and suspension tuning do a great impression of a smaller vehicle, as the Durango SRT does exactly what you ask of it (and well).

Despite its size, this is an easy vehicle to place on the road, too—sightlines are key and Dodge's designers did a fine job of not limiting the driver's visibility. This sequence is also a reminder of how good the seats and steering are, helping the driver stay in place without sacrificing comfort. Push through to the innocuous right at turn 2, and one of the most beautiful sights in motorsports opens up—the front straight at Indy is breathtaking.

By this point, you've forgotten that you're behind the wheel of a three-row, six-passenger crossover SUV. The Durango SRT barely qualifies as such a thing—it's the heart and soul of a Charger, scaled up into something bigger, stronger, and more capable. It's the family man's Challenger, a more versatile and affordable—$64,090 (including $1,095 in destination charges) to the Jeep's $67,990—take on the Grand Cherokee, and with just enough of the Viper's uncompromising character that it earns its seat at the SRT dinner table. Or, in this case, at the race track.