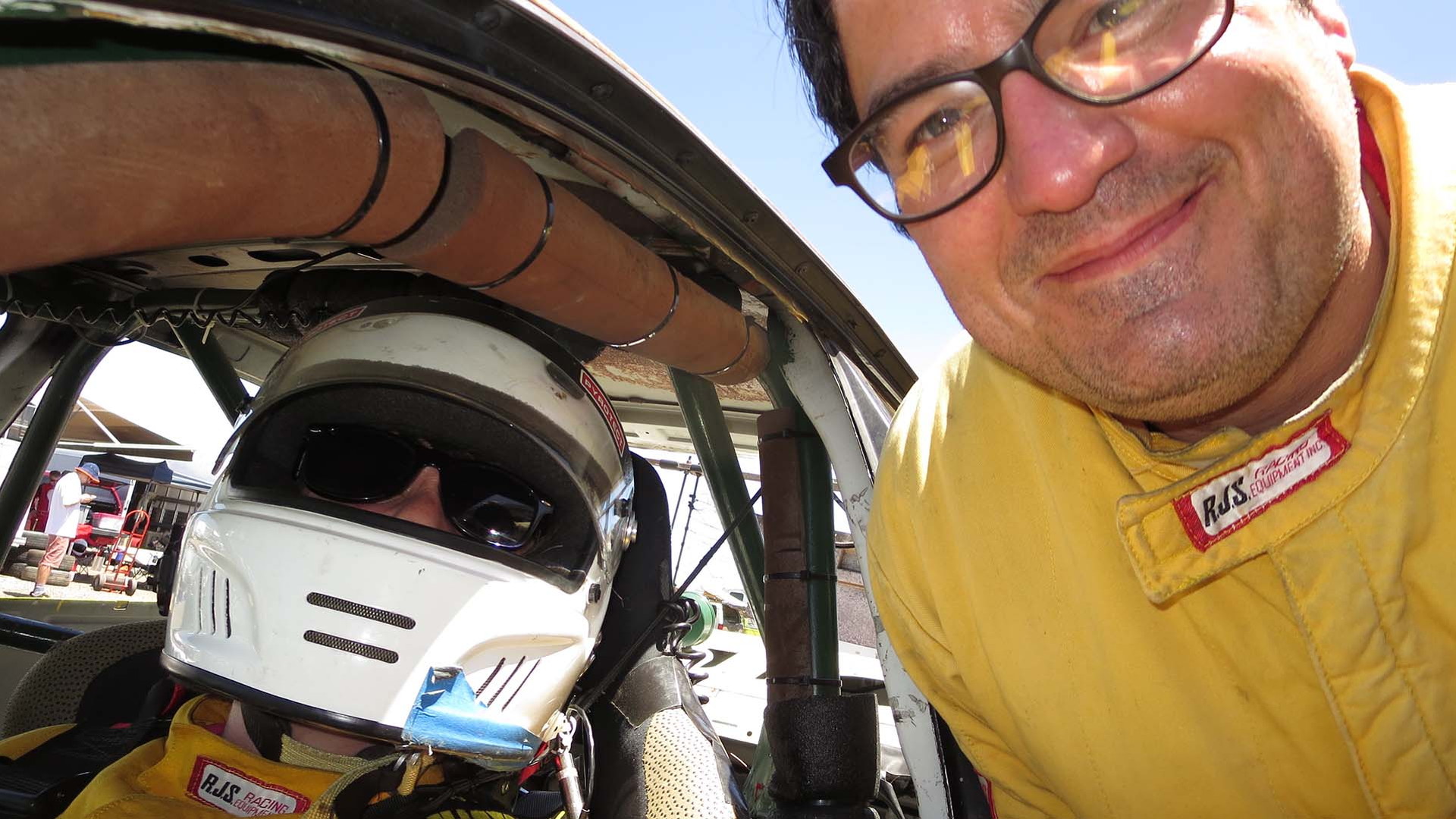 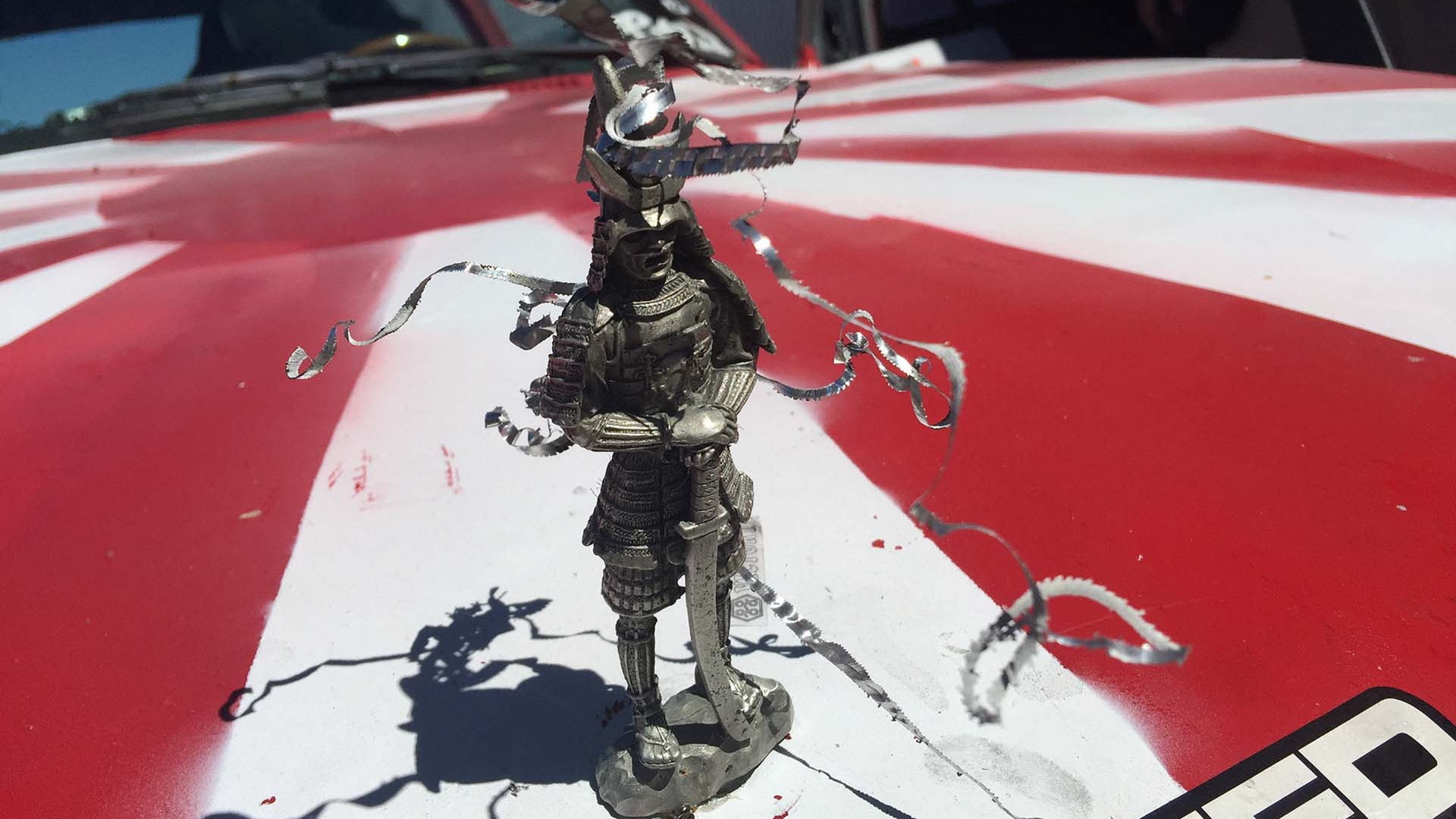 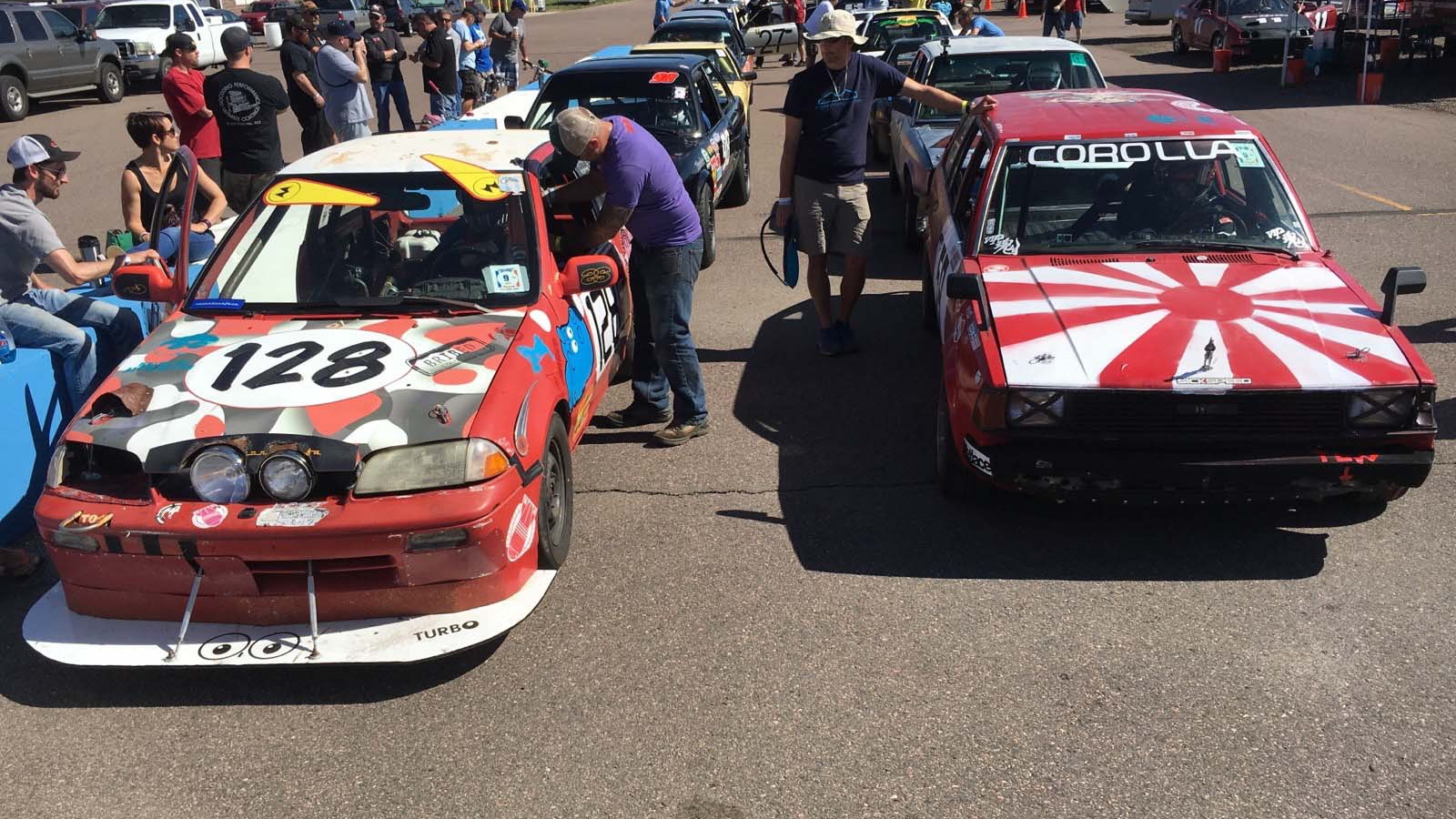 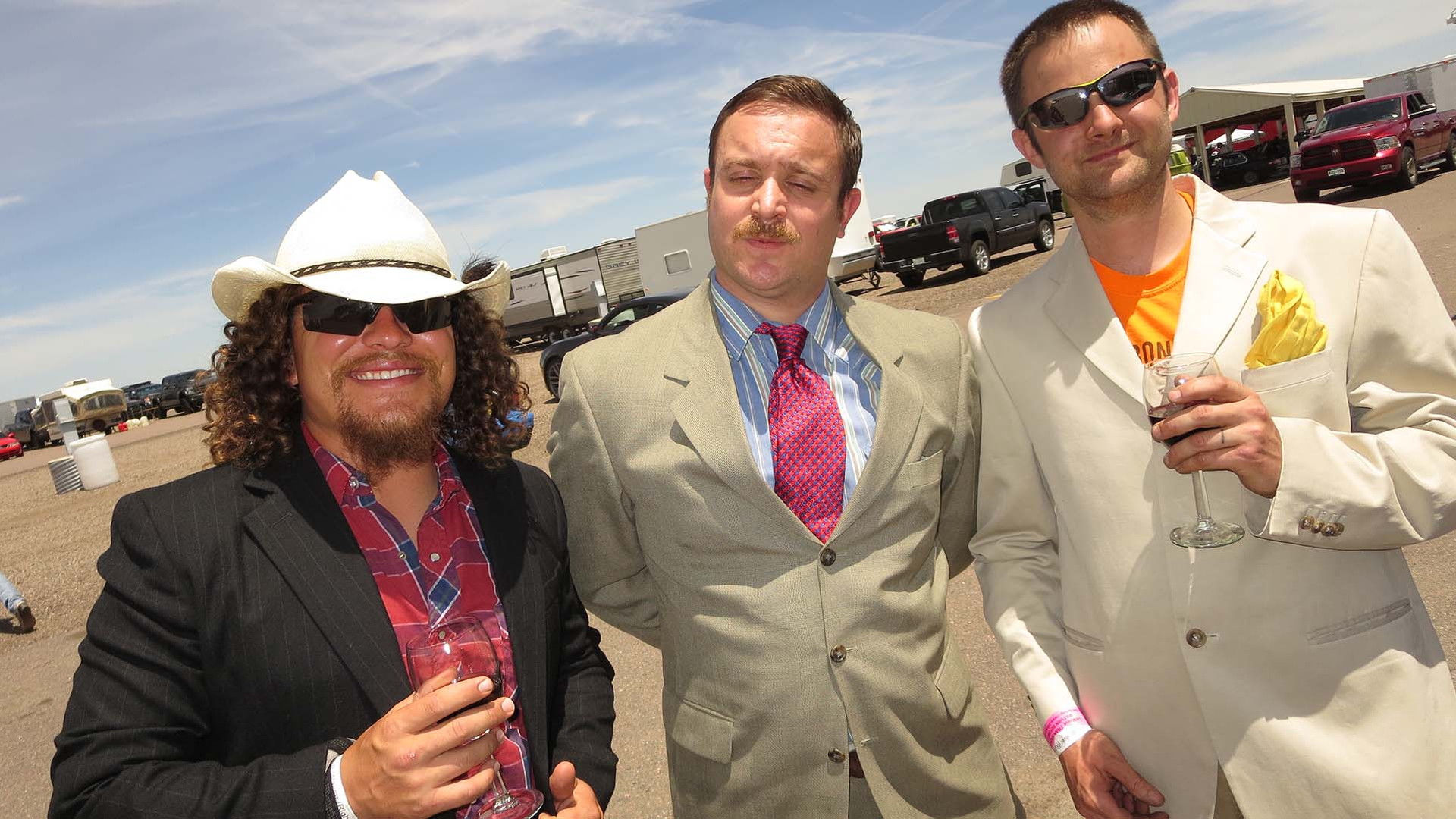 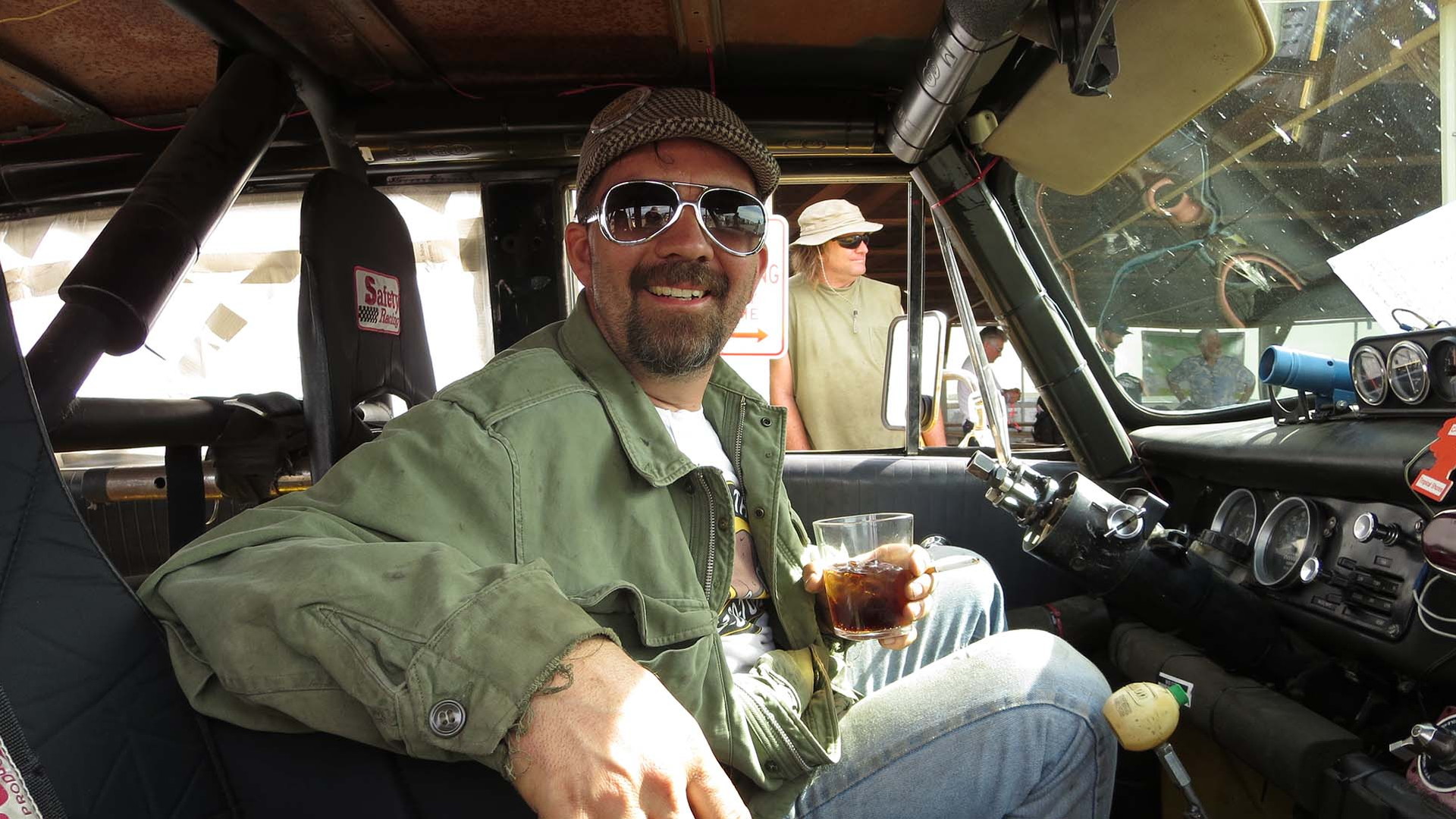 Some of the guys might wear race suits, but they’re just as likely to wear money-green track suits or black-and-white Speedos meant to look like "tuxedos." They’re racers and they’re having a blast.

I've been to a fair number of automobile races and they're all carnivals. This one is definitely the sideshow kind with a bearded lady and the elephant man.

You see, at the Colorado B.F.E. in June at High Plains Raceway in Byers, Colorado, anything goes.

Across the country, grassroots racing organizations like the 24 Hours of Lemons host dozens of races that make the sideshow the main event. Chump Cars, Lemons, hoopties—whatever, are equal parts cars on track, crazies off track. The B.F.E. even hosted a wedding; two veteran racers married each other between the first and the second night. Instead of confetti, the couple was showered with zip ties—their preferred tool for fixing dented sheet metal during a race. Yeah, awesome.

In the corporate world of big-money car racing, the only romance left is still the awkward tryst some teams have with big tobacco.

To say that the small-time races with amateur drivers running $500 cars is the minor leagues for auto-sport isn't true: This is what major league baseball was like when it was great.

It's possible to over-romanticize the working-class drivers and engineers wrenching on cars all night for pride. It's likely that more than a few people will look at the deep-seated dirt in the nails of drivers and mechanics on Sunday afternoon and feel like these guys are closer to "car culture" than any Saturday morning Cars and Coffee could ever offer.

I'm not talking about any of that.

The reason why grassroots motorsports is going to save racing is because it's the only racing that's a helluva lot of fun to watch, like baseball was too.

Baseball players used to have nicknames like "Say Hey Kid," "Goose," and "Ugly." There were even a baker's dozen players called "Oil Can." Now we have myriad permutations of "-Rod" and too-serious nicknames like "The Sandman" or "Minister of Defense." The only way they could be more serious is if someone were called "The Mexicutioner" or "The Mayor." Oh, wait. Those are actual nicknames in the modern game. Yeesh.

Yeah, I know. It's possible to over-analyze here, but did you see that Honda Prelude named "R2-Detuned" that just drove by? Those guys are probably having a blast.

At this point, you might be saying that I'm the type of guy who's disillusioned by mainstream anything. I'm not. I watch more Formula 1 than I have hours in the day and I love every second. The bleeding-edge tension and high stakes are almost too much to bear—every second it feels like I'm watching 30 tightrope walkers fistfight each other between the Petronas Towers. I'll never give that up.

Its popularity is undeniable. In 2014, the 24 Hours of Lemons set the world record for the most participants in a single race (242 at Thunderhill) and more than 60 teams participated in the Colorado race this year, which is less geographically convenient than scratching between your own shoulder blades. That can only be good for all of motorsports.

For the future, I hope it's Oil Can this and faux-feminine hygiene race team that. It's the camaraderie and heroic backyard engineering that'll endear people to motorsports in the same way pitchers on acid and overweight outfielders playing half in the bag made baseball America's pastime once.

Just, I'm not so sure many of them played center field in a banana hammock. Maybe that can go away?

The 24 Hours of Lemons paid me to judge the 2016 Colorado BFE and let me camp on site with my dog. Part of that salary included peanut butter crackers that would probably have tasted the same in a pure nitrogen environment and a bottle of rum of questionable quality. I was also eaten by many bugs.