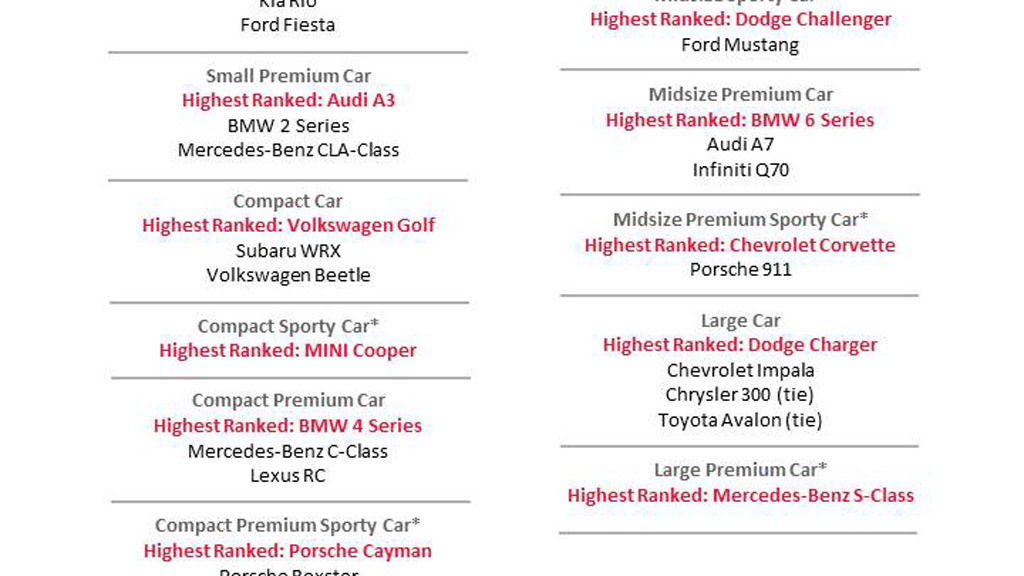 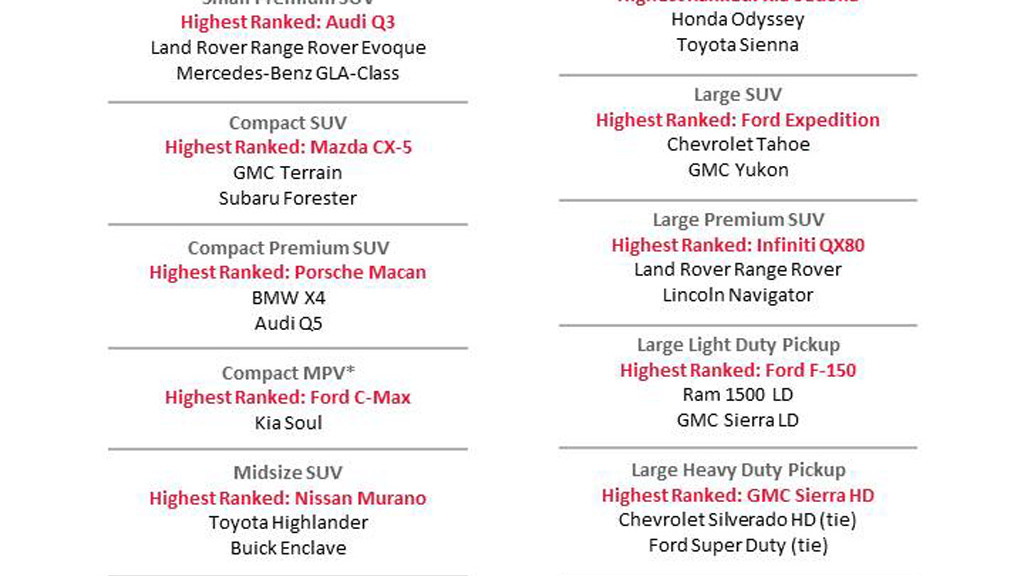 J.D. Power isn't the end-all, be-all of automotive evaluation, but the influential research firm and its various studies are a solid and fairly comprehensive resource to consult when looking for a new car. One of the most popular with automakers and customers alike is the Automotive Performance, Execution and Layout study, or APEAL for short, which looks at the 'gratification' a car owner experiences with each new vehicle on the market.

Researchers survey thousands of new car buyers after 90 days of ownership—there were more than 84,000 participants this year—and ask them to grade their vehicles on 77 different attributes like fuel economy or styling, resulting in an average score that falls between 0 and 1,000.

The study is now in its 20th year, and for the 11th year in a row it’s Porsche on top. The German sports car marque had a score of 874. The average APEAL score this year was 798, a rise of four points. At the other end of the scale was Smart, which had a score of just 683.

What researchers discovered this year is that certain safety features contribute to a significant boost in APEAL scores. For example, the overall score among owners of vehicles with blind-spot monitoring systems is 38 points higher than among those without them. And automakers will be happy to note that owners, on average, were willing to pay a premium for these features.

The researchers also discovered that the non-premium brands are catching up on their more expensive rivals. The findings show that the gap between non-premium and premium brands is the smallest it’s been in the past 10 years, narrowing by 16 percent since 2006. The average score in the non-premium segment (790) has improved by 5 points from 2014, while the average score in the premium segment (841) has improved by only 1 point. The best ranked non-premium brand was Hyundai with a score of 809, followed closely by Volkswagen with a score of 806.

When it comes to specific vehicle segments, it’s interesting to see that the Chevrolet Corvette scored highest in the “Midsize Premium Sporty Car” segment, beating the Porsche 911 in the process. The Bowtie brand has improved significantly over the years, and this year it had two other top vehicles. Other makes with three top vehicles were Ford and Porsche.

The results are particular important for automakers as the top vehicles tend to remain on dealer lots for shorter periods, command higher transaction prices, and are more likely to create owner loyalty when they are ultimately sold or traded-in.