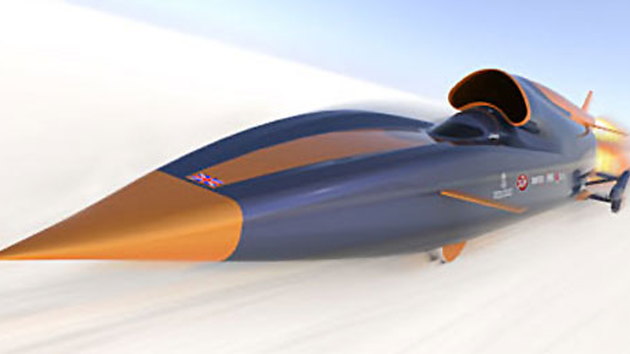 Calling the Bloodhound SSC ambitious is the height of understatement. Its mission is to be the first car to break the sound barrier. On the way there? It'll smash the current world land speed record—a record driver Andy Green currently holds.

And as you'd imagine, the specs are insane. The rocket engine produces 47,000 pounds of thrust—in comparison, an F-16 Fighting Falcon produces 27,000—it uses an F1 engine as a fuel pump, and the cabin is designed to withstand impact from a tire fragment traveling at 2,300 mph. Test runs will begin at 300 mph.

Since straight-line stability is the key to a safe and successful run, the tailfin will be a crucial element, and building it is a project in itself. Given that the Bloodhound has more in common with a fighter jet than a car, it's fitting the man in charge of it, Terry Godsmark, is a 20-year veteran of the Royal Air Force.

Far from being just a wing mounted vertically, its aluminum skin will hide plenty of high-tech wizardry, including cameras, accelerometers, strain sensors and pressure gauges to monitor its performance in real time. All told, there are more than 139 parts—not including the 10,000 rivets to hold the to hold the surface to the skeleton.

The Bloodhound SSC is slated to start testing before the end of the year, and its attempt to break the sound barrier will be streamed live. To assist with funding, the team is offering the opportunity to add your name to the tailfin for a donation via the project's official website.

At around $25, it's not a bad way to put your mark on a sure-to-be historic effort.