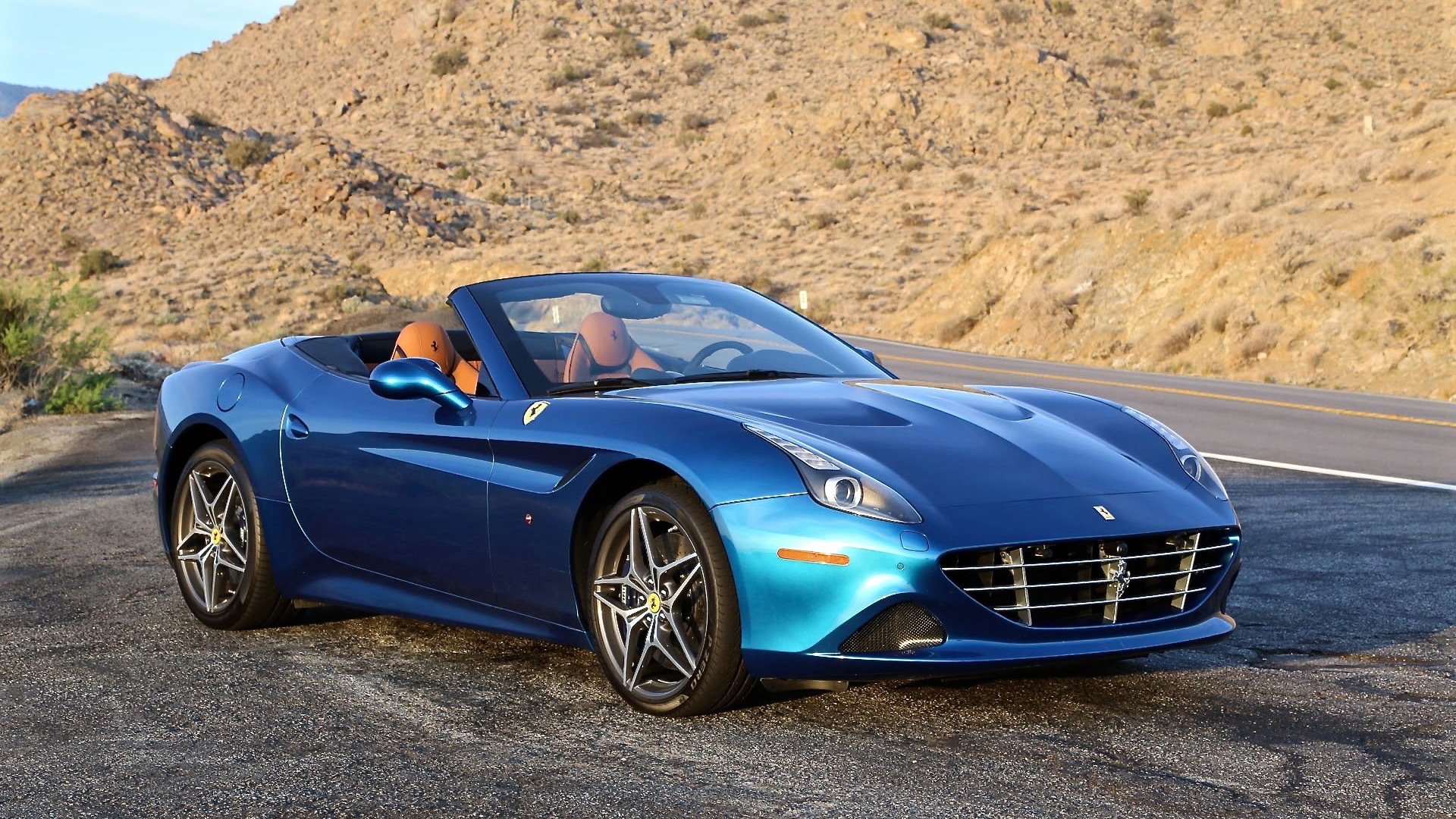 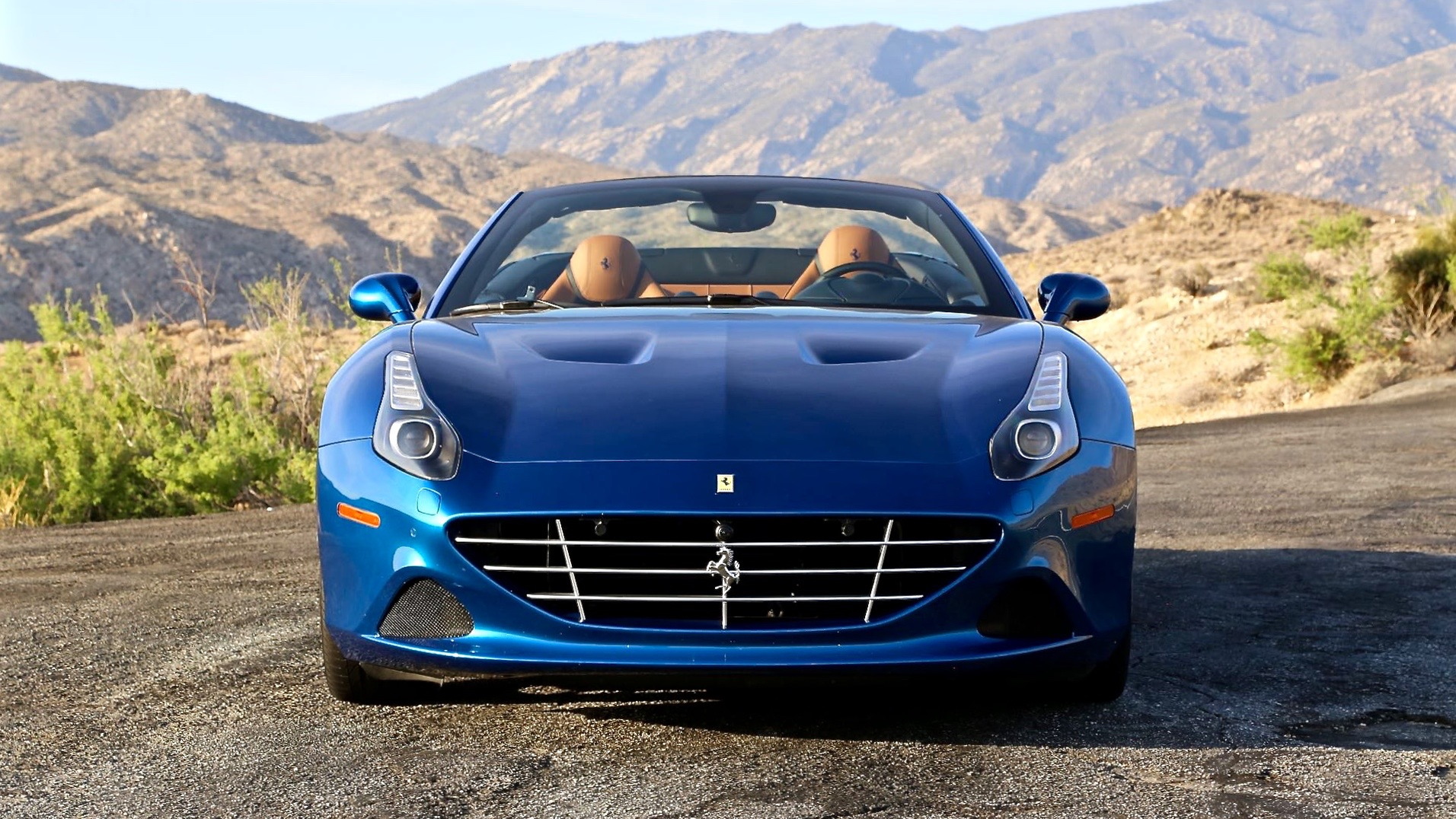 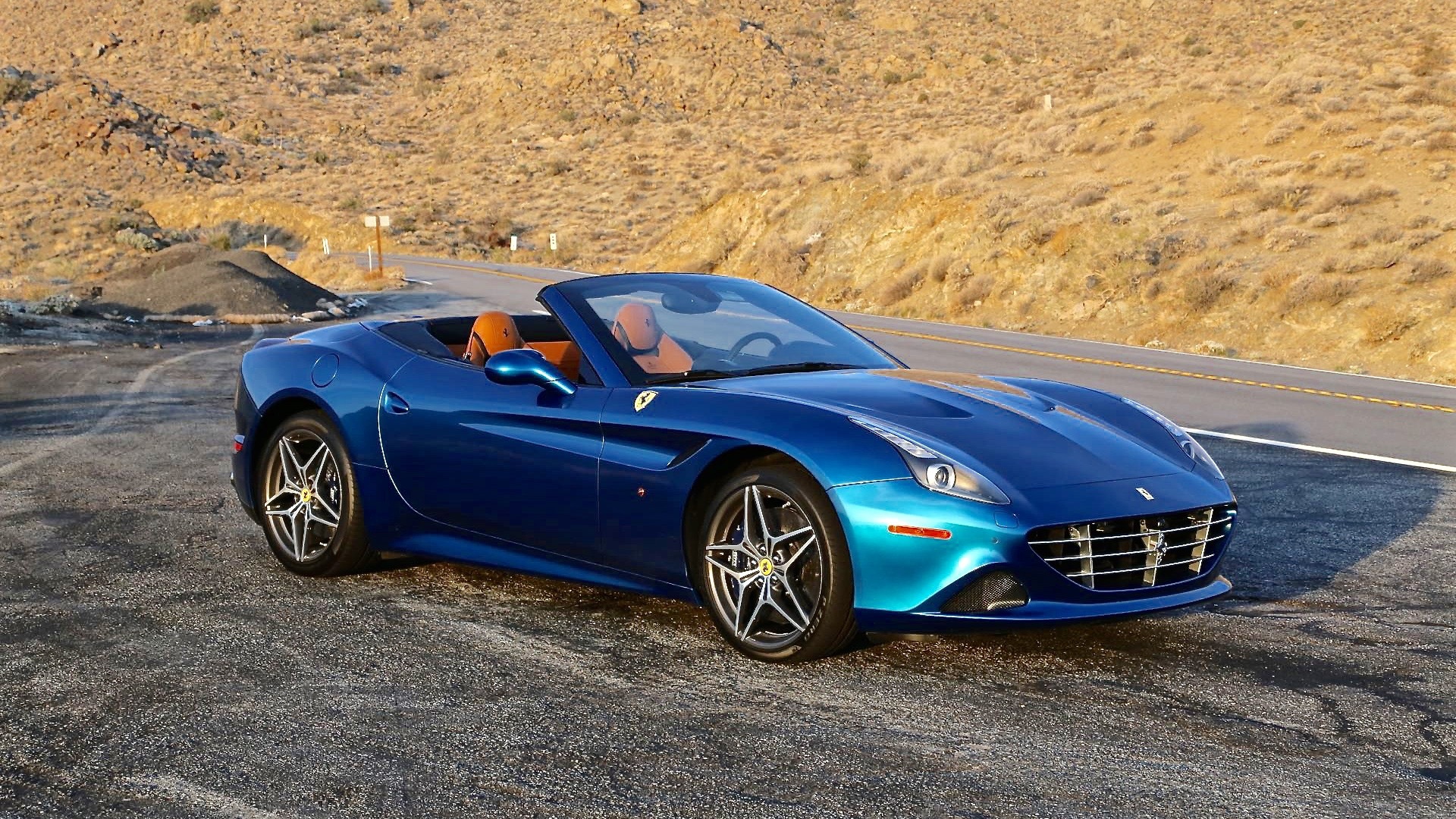 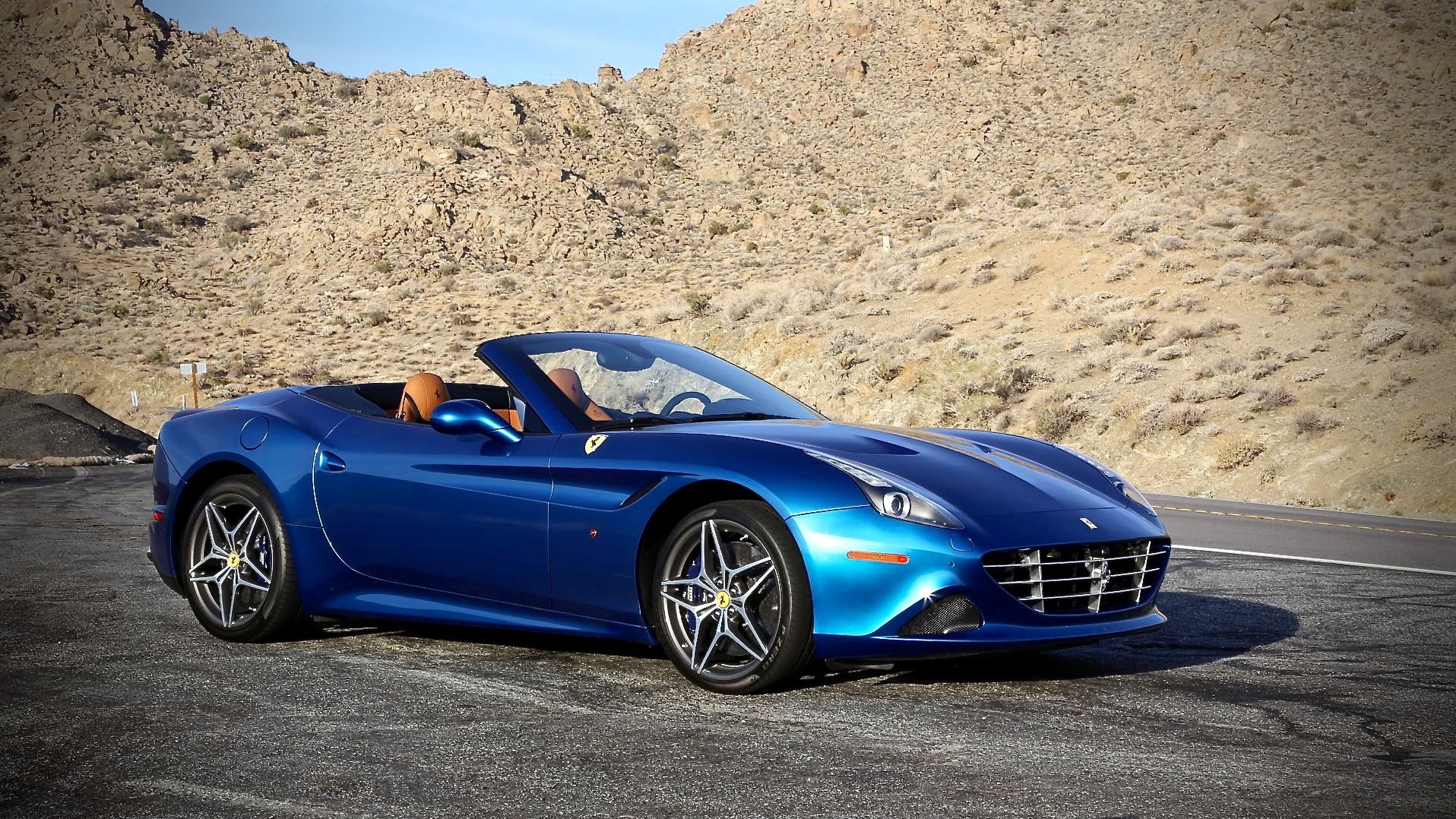 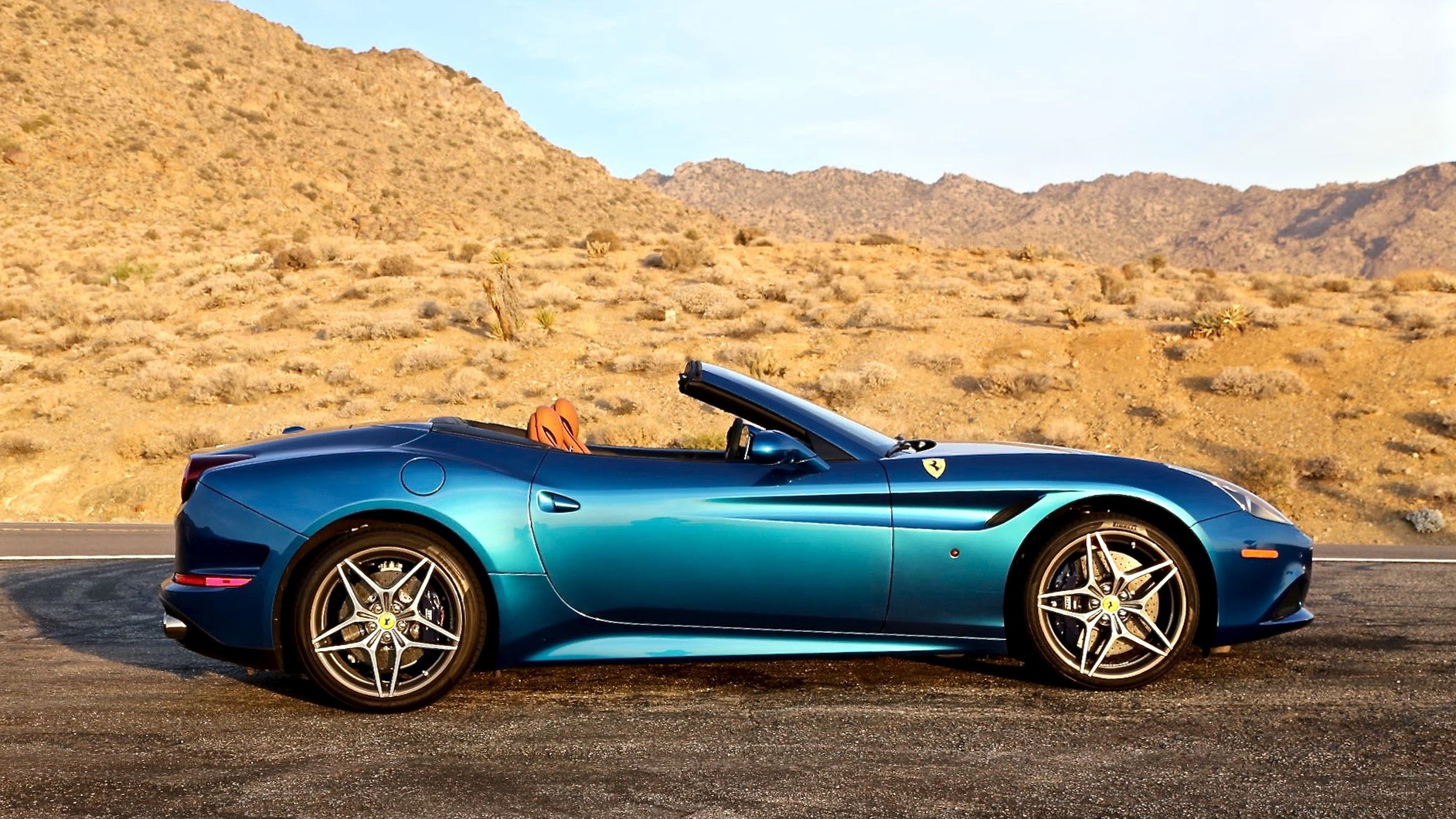 Swimming pools, movie stars, things that end in the number 5. California means a lot of things to a lot of people but to Ferrari, it means grand touring.

In the latest installment of the Italian automaker's long-running love affair with the Golden State, the California is a 2+2 hardtop convertible--what Ferrari calls the ultimate grand touring car. Six years into its model run, it's received some gratifying updates, not the least of which is a twin blast of turbocharging to pull its performance numbers out of the scintillating range, firmly into the category of outrageous.

Is there any better excuse to grab the red-lacquered key to a new California T and head for the high desert for a weekend-long joy ride?

California, to the T

Grand touring? Isn't Ferrari supposed to be sports cars? Yes, but who says you can't have a little of both?

The California was new in 2009 and it was built specifically for people who get a chill up their back from the wail of a classic V-8--but don't want to corner at ten-tenths every day. That's why the California has four seats, even if two of them are pretty skimpy. Why it has a folding hardtop. Why it has a paddle-shifted, clutch-pedal-free transmission. Why it has things like cupholders, a usable trunk, a stereo with more speakers than the car has cylinders.

This year it gets a round of touch-ups that make it a much better car—more of a Ferrari than ever. For starters, the California T looks sleeker than before. The proportions aren’t as menacing as a 458, but what is? The retouched front and rear end mask the tall tail a little better, and the spare grille is once again a thing of beauty, framed by reshaped headlights that claw their way up the fenders, like they're being peeled away from the car by the sheer speed it generates.

You see, what really upconverts the California into a T is power. The original California hustled by with a naturally aspirated 4.3-liter V-8 with 453 horsepower and 358 pound-feet of torque. Now the California has a 3.8-liter V-8 with twin turbochargers that whistle out a cool 552 horsepower, that prowess marked by a touch-sensitive gauge on the dash that toggles between boost and efficiency. Yes, the California T gets better gas mileage with the downsized engine, but it also puts out a massive 556 pound-feet of torque--almost 50 percent more than before.

MUST READ: Man Considered "Too Drunk" Is Acquitted of Hit & Run Charge

It feels more alive now, from the guttural bark that accompanies astonishing low-end power to the very faint whistle of the turbos when the right-pedal travel hits its maximum. Just listen to it whuffle at low rpm, then blast into a quintessential Ferrari soundtrack, and any fears about the aural effects of forced induction melt away, along with some tread.

If you think Ferraris should only have gated shifters, you’re behind the times. This one comes with a seven-speed dual-clutch gearbox, and it’s fantastic to paddle through the gears. Pair it with the vigorously retuned powertrain, and the California T arrows its way to 60 mph in 3.6 seconds by Ferrari estimates, and guns for a top speed of more than 195 mph.

The California T isn't a lightweight now, in raw power or in curb weight. It's at least 3,500 pounds without options, or necessities like gas or oil or other wet essentials, nevermind people or cargo. But wind it through the canyons that arc above Palm Springs, and the California seems to shed weight as you push it.

The grand touring happens down in the valley, where even stiffer springs and quicker-responding dampers leave it completely cruise-worthy. It trundles around searing-hot Palm Springs with a soft touch, like it was born to profile in premier outlet-mall parking spots--which it was.

Step up the pace on the long uphill run leading Highway 74 into the desert hinterlands, and the California T maintains its firm grip, even when it’s in its most comfortable settings. But when the road breaks into looping 30-mph switchbacks, it's time to change the California’s demeanor with the little red switch on the steering wheel — the manettino. Twist it from Comfort to Sport and the throttle and shifts wake up, the optional magnetic shocks take a militant stance against body lean. The California steers very crisply, equally at home needling its way through the rocky outcroppings of Highway 74--and it has big carbon-ceramic brakes to haul it down into tight corners, right now, when the stray Huracan or Z06 is taking the next turn a little too slowly.

A Ferrari in performance, the California's a creature of comfort on its own terms. As you should expect by now in the era of globalized automakers, there are some bits and pieces from the Fiat Chrysler empire, but plenty of touches all Ferrari's own, like the manettino, the pushbutton headlights, the turn-signal buttons split for easy thumb operation.

Settle in the low-slung cockpit's elegantly spare front chairs, and you can see how far Ferrari has come from its purist roots. Love it or not, there's an honest to God touchscreen in here and it works pretty well for audio functions. Stream Bluetooth, dial in some Beach Boys via the USB port, whatever you want.

The California T is one of the first vehicles be outfitted with Apple Car Play. It mirrors your phone’s screen, and in theory makes it a little safer to use your phone on the go.

The navigation system on offer? You'll be better off using your smartphone, which you can tap and command more easily. The screen easily washes out in anything but indirect sunlight, anyway.

Shudder to think, the California T is borderline practical, depending on your definition. Rear-seat space is big enough for a backpack; the trunk has room for a couple roller cases or a little more, as long as you move a panel that blocks the top from retracting when the trunk is overfull. There are front and rearview cameras, something we’re sure Enzo Ferrari never contemplated in a lifetime of ingenuity, but which we find immensely useful in trying to protect the car from, well, everything.

Oh, and then there’s the price. The California T starts at just about $200,000, but who can resist a trip through the custom trim order book? Not us, not after a look around at our test car's contrasting blue leather cabin, blue-painted calipers, deep-sea "California" blue paint. This stuff shouldn’t come cheap—and it doesn’t.

Look, there are grand touring cars from all over the planet. You could have a classic British GT, something from Germany, or even one of the American quasi-supercars and save big change.

If it were our money, we'd say go west, young man.

It's a Ferrari, after all. That prancing-horse badge is psychological thing, for sure, but it's also a vivid V-8 reality.