While all eyes are on New York this week, over in Korea the biennial Seoul Auto Show is taking place where this year Hyundai unveiled a handful of concepts including this mid-engined Veloster race car. The concept is called the “RM15”, short for “Racing Midship 2015”, and it’s said to demonstrate the Korean automaker’s passion for performance and know-how when it comes to advanced vehicle materials and technologies.

The RM15 features an aluminum spaceframe as its core structure, with a covering of light, stiff body panels made from carbon fiber-reinforced plastic, which together help to achieve a significant weight saving compared to a conventional all-steel vehicle. The concept weighs just under 2,800 pounds, which is about 430 lbs lighter than it would be if built using all-steel construction. The weight balance and center of gravity has also been improved.

Subframes integrated with the body as well as a WRC-inspired roll-cage add extra stiffness to the structure, providing a firm foundation for the aluminum double-wishbone suspension. The wheels are 19-inch diameter forged alloy units fitted with 235/35 tires at the front and 265/35 at the rear. 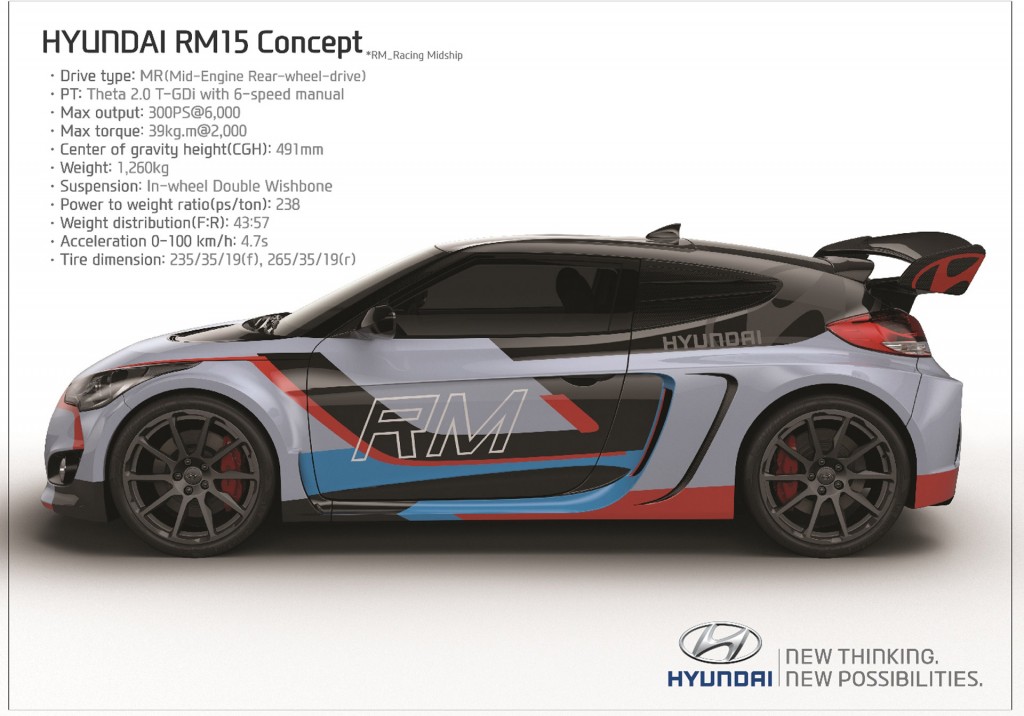 Power comes from Hyundai’s turbocharged and direct-injected 2.0-liter four, which is mounted transversely behind the two-seater cabin and ahead of the rear axle, ensuring optimized weight distribution. Vertical air-intake slots in the flanks of the car, ahead of the rear wheel arches, increase cooling airflow within the engine bay and enhance powertrain efficiency.

Peak output registers at 295 horsepower and 282 pound-feet of torque, and drive is to the rear wheels only via a six-speed manual transmission. The setup enables 0-62 mph acceleration in about 4.7 seconds.

Finally, the concept wears a livery similar to that on Hyundai’s i20 WRC rally car, with the colors representing the automaker’s ‘N’ performance brand.

This is actually the second Veloster-based mid-engine concept from Hyundai, so perhaps there’s greater significance here than Hyundai is letting on. The previous concept, the Veloster Midship, was shown at last year’s Busan Auto Show.