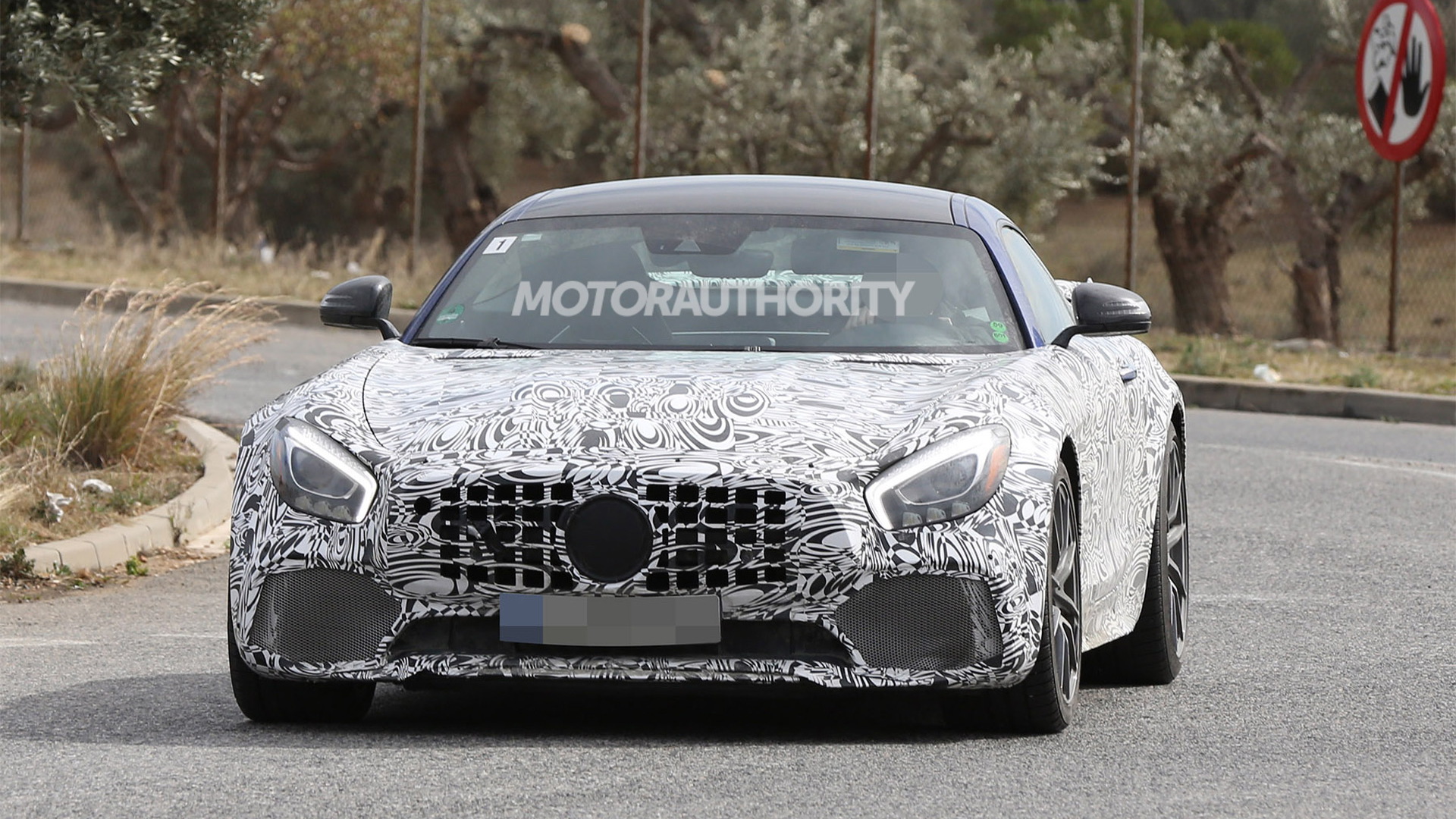 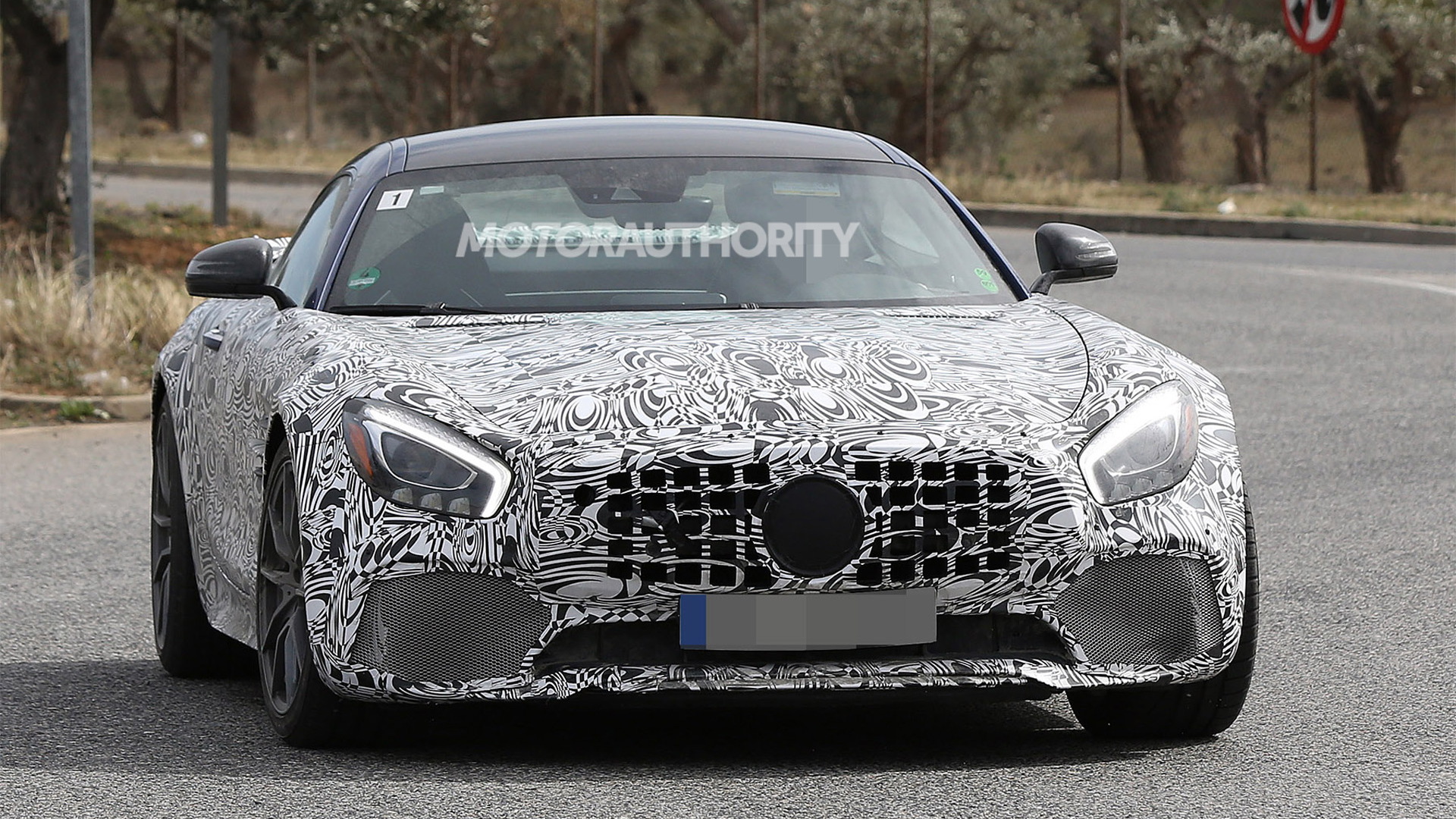 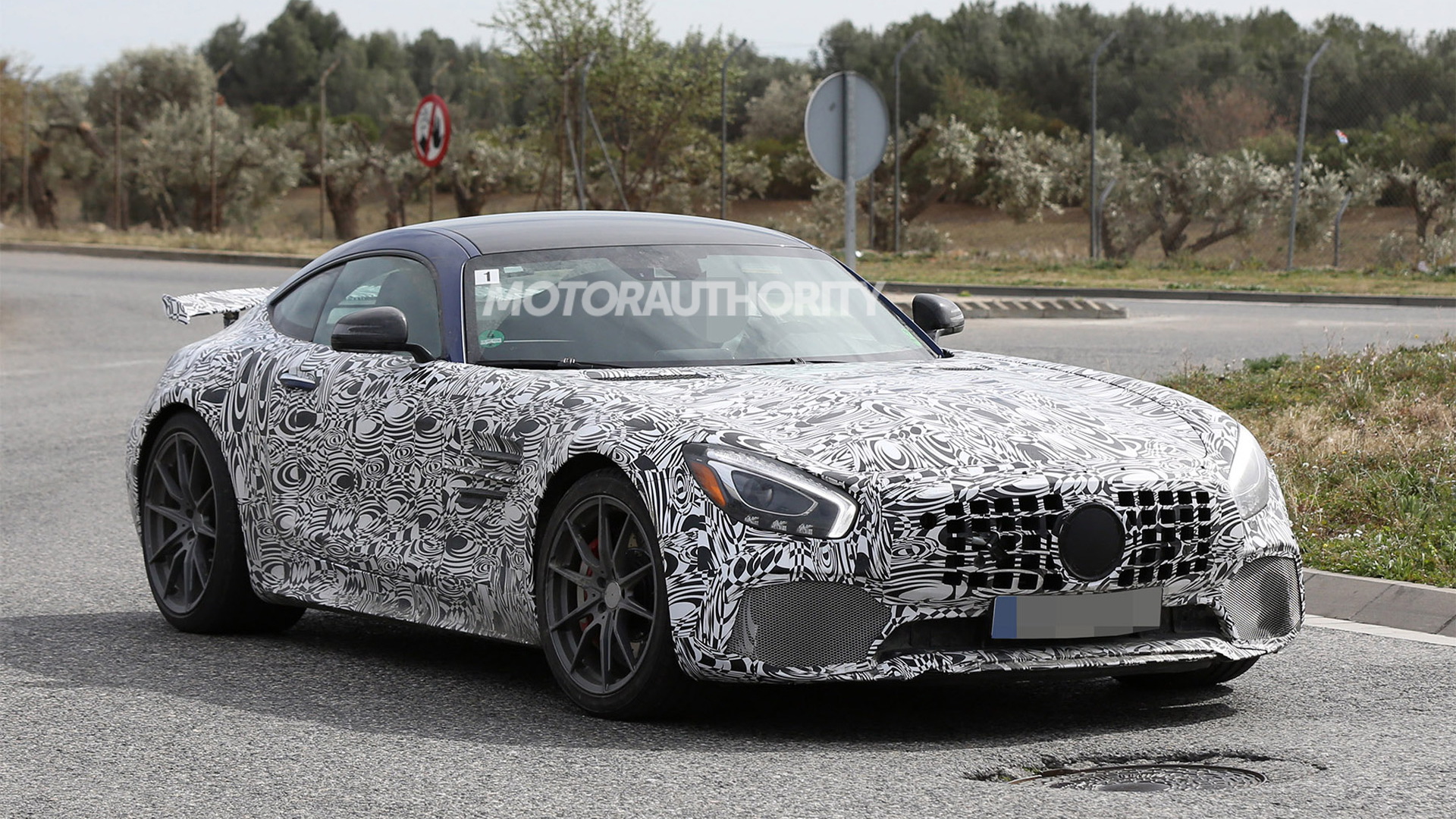 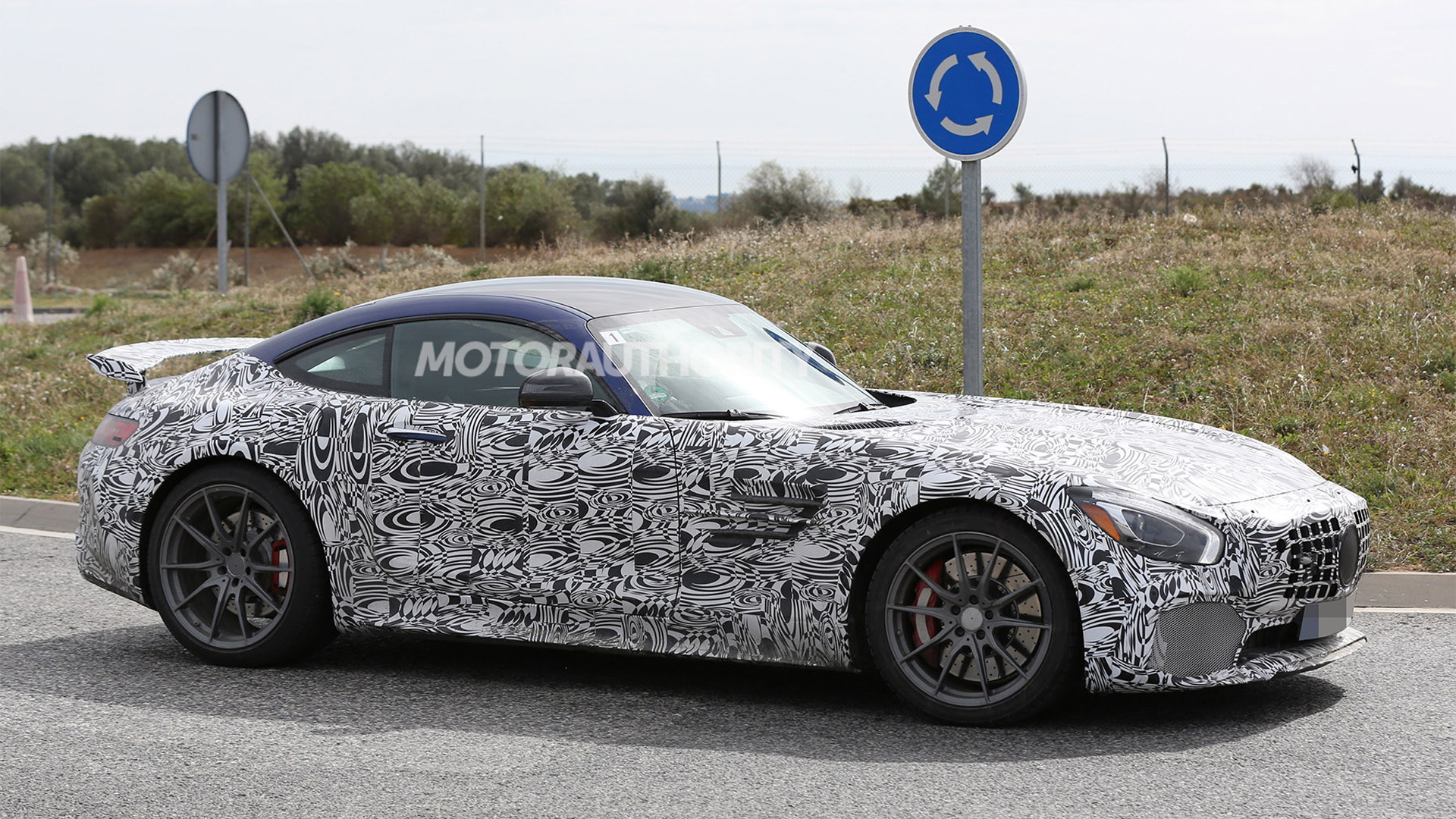 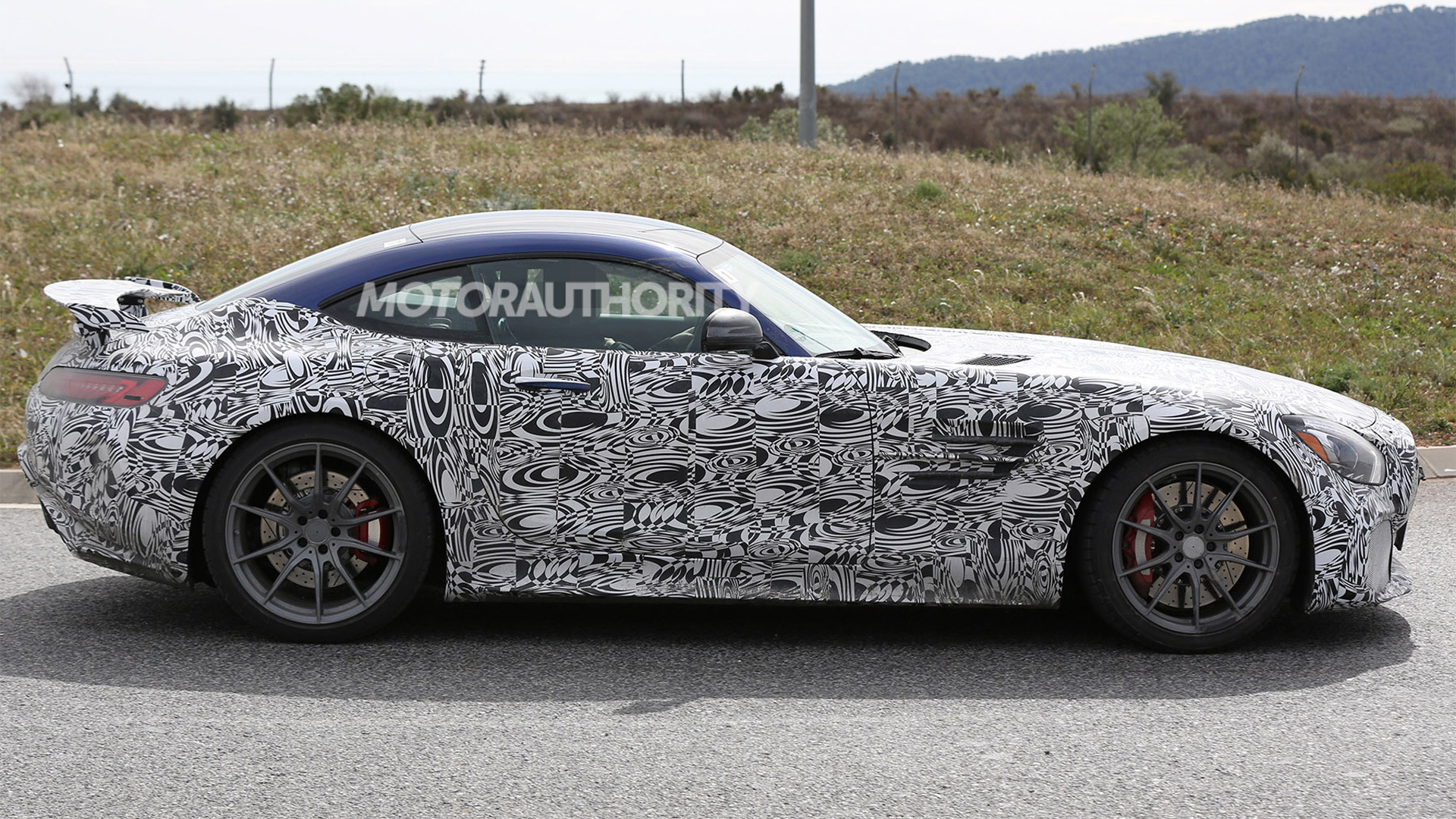 These are the latest spy shots of the upcoming track-focused Mercedes-AMG GT designed to rival the likes of Aston Martin’s Vantage GT12, the Porsche 911 GT3 and the more mainstream Chevrolet Corvette Z06 and Nissan GT-R NISMO models. The aggressive front splitter, front canards, fixed rear wing and slightly wider fenders hint at the dialed-up performance of the car, though it won’t be badged a “Black Series”, as that particular model will be coming later in the GT’s life cycle. Instead, this one is expected to be called a GT R.

Its development has been linked closely with work done on the Mercedes-AMG GT3 race car (shown below), so expect power to be dialed up, weight to be reduced and the suspension to be stiffened substantially. Boosting output should be easy as the GT’s new twin-turbocharged 4.0-liter V-8 has much greater potential than the current GT S variant’s 503 horsepower. A figure of 550 hp is likely.

Dropping weight will be more difficult as engineers already went to great lengths to get the GT S variant’s weight down to approximately 3,460 pounds. To further reduce this, more exotic materials including carbon fiber will need to be utilized, and we should also see some of the standard car’s amenities deleted. The resultant weight savings should be between 176 and 220 pounds.

Bigger wheels, tires and brakes will also likely make the cut, and we could see some changes to the GT’s seven-speed dual-clutch transmission implemented for track duty.

With the boost in power and the lighter weight, the car’s 0-60 mph time could drop to 3.6 seconds or even lower, down from 3.7 seconds in the GT S. Top speed will likely remain at 193 mph as most of the aero aids are likely to be focused on producing downforce, which usually comes at the cost of more drag. In a previous interview, Mercedes-AMG chief Tobias Moers said the new track-focused GT should cut 10 seconds from the standard GT’s Nürburgring lap time which he said was 7:30, achieved using regular tires and not the special compounds other manufactures often use for setting lap times.

A debut is expected this summer, possibly at the 2016 Goodwood Festival of Speed in June. We should see the car reach showrooms shortly after, as a 2017 model.