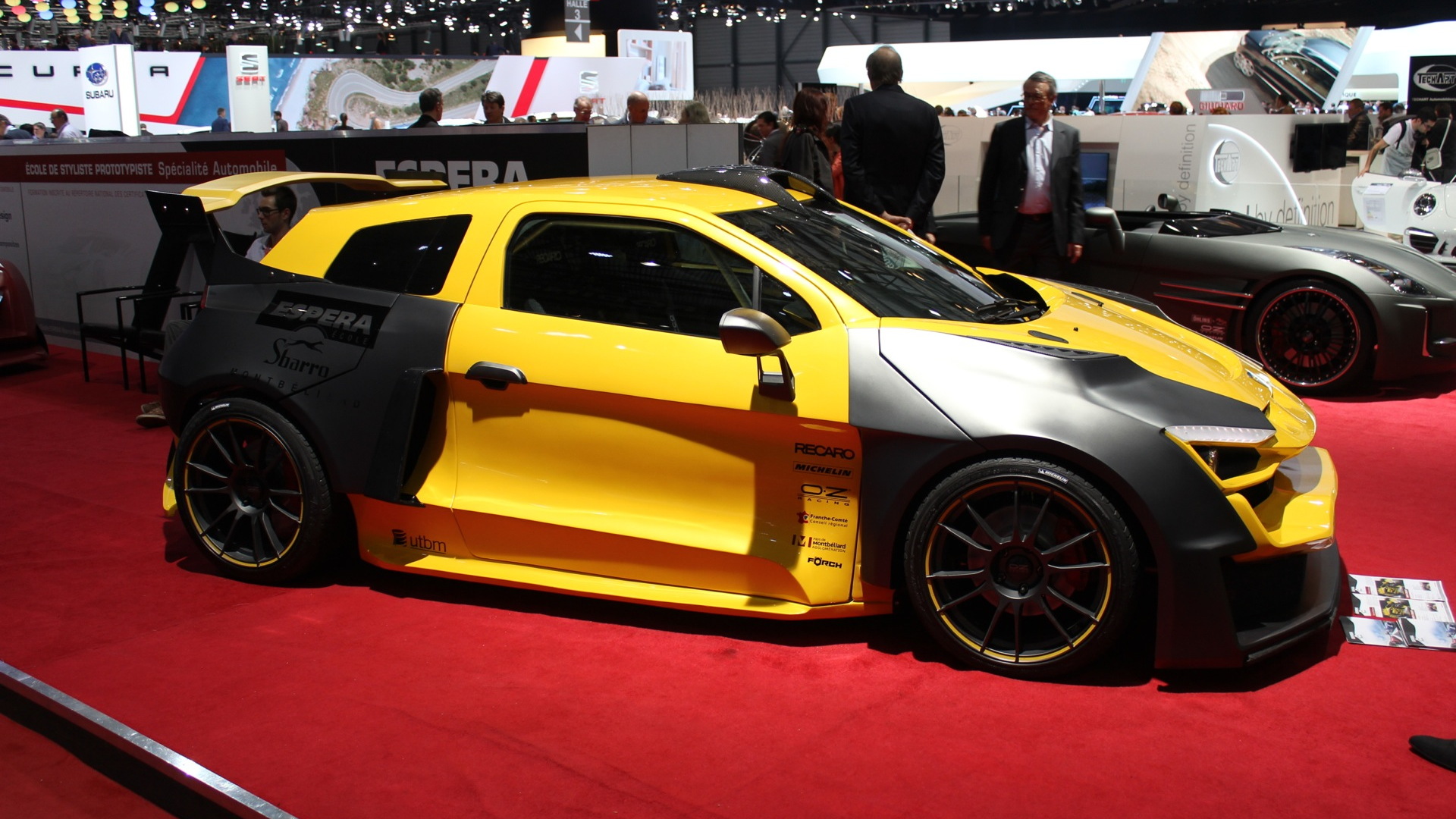 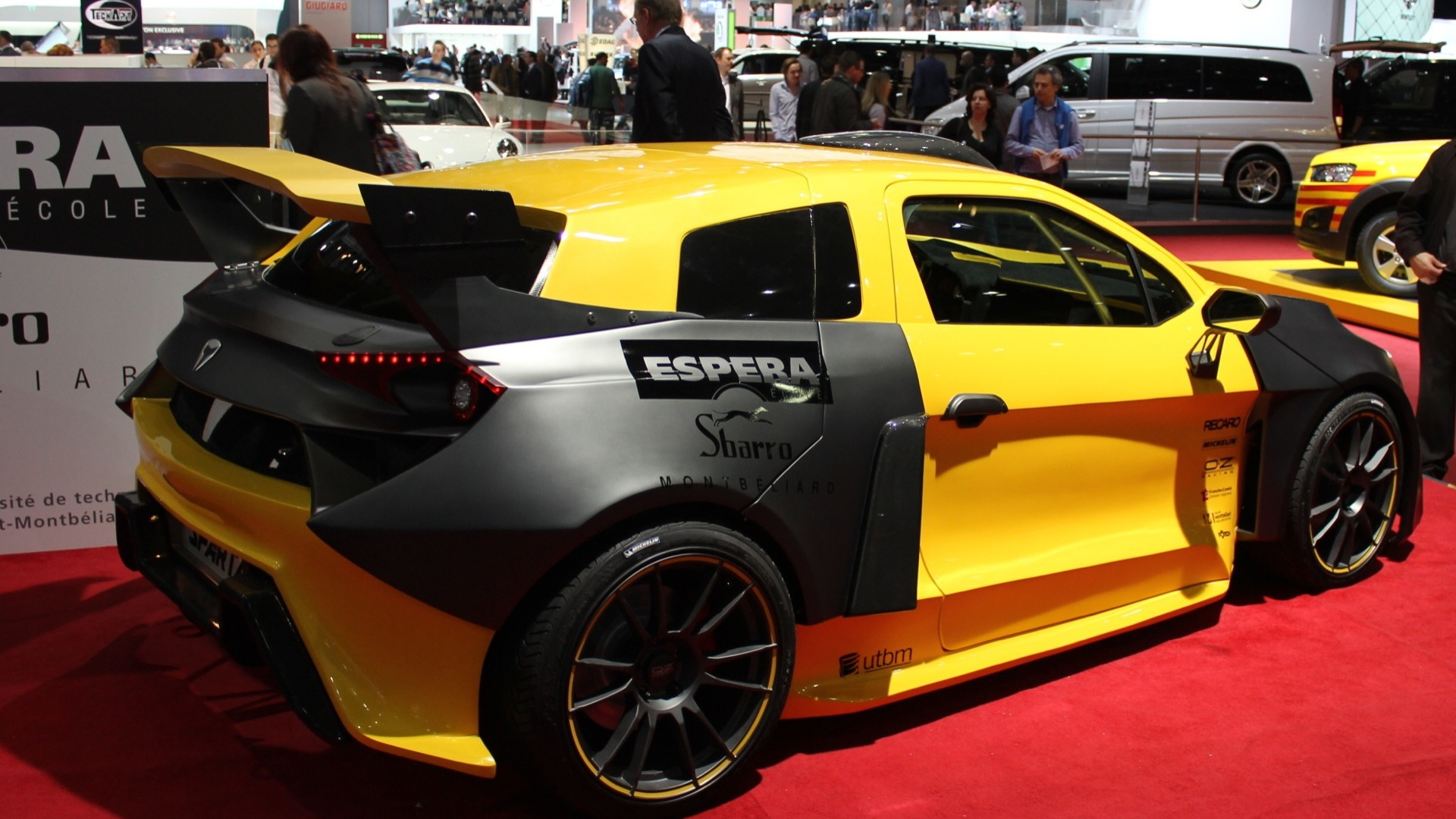 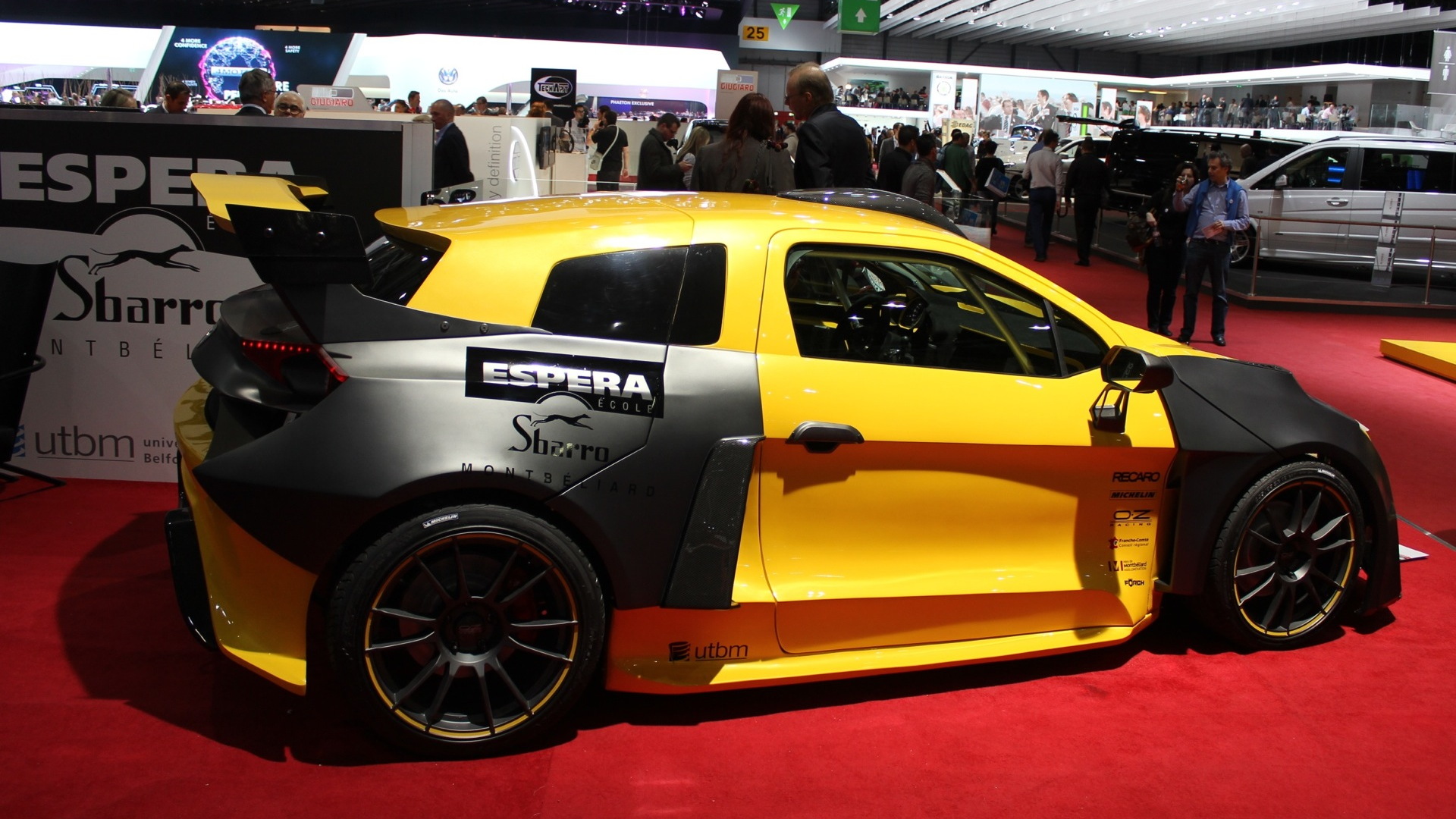 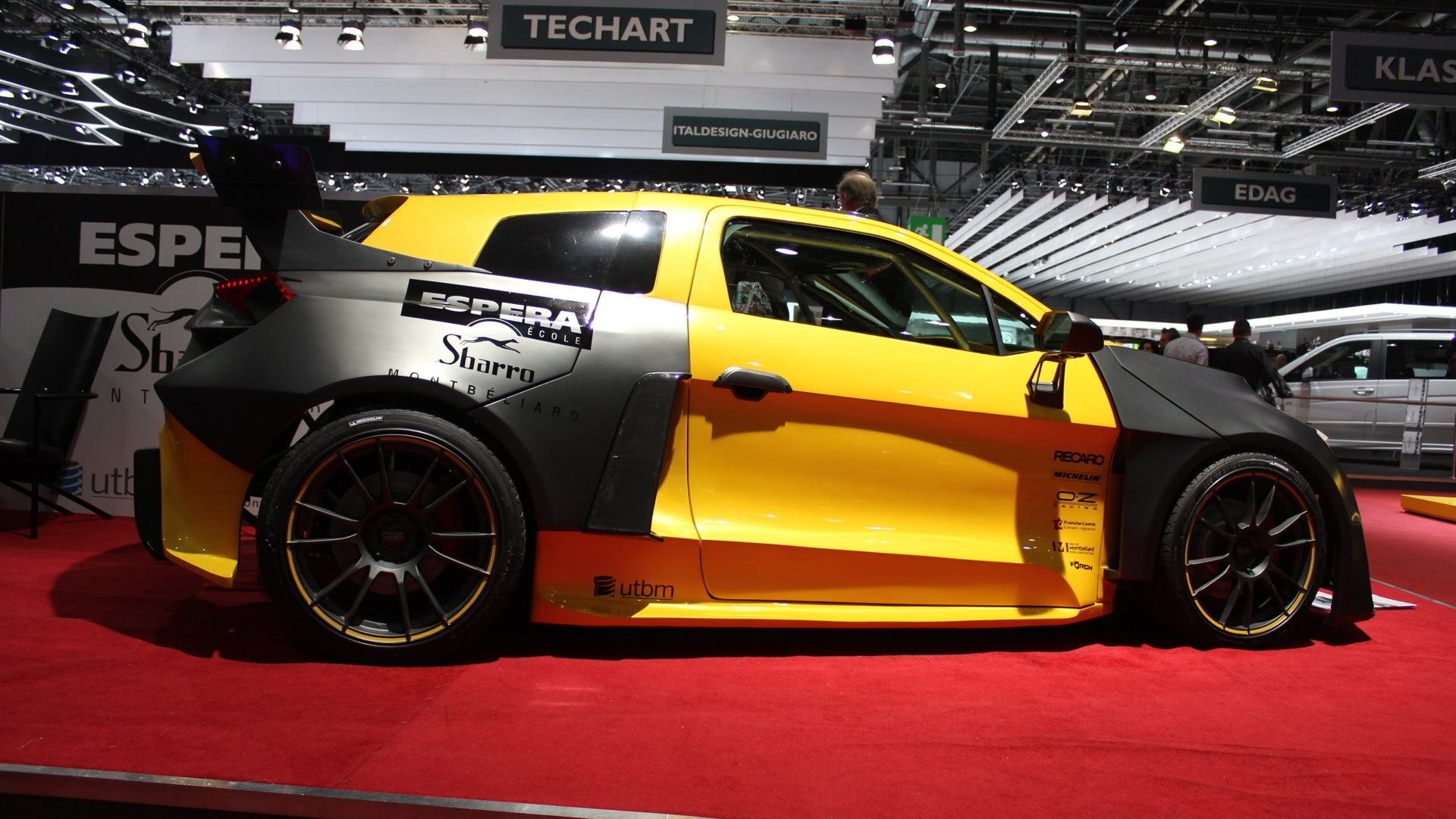 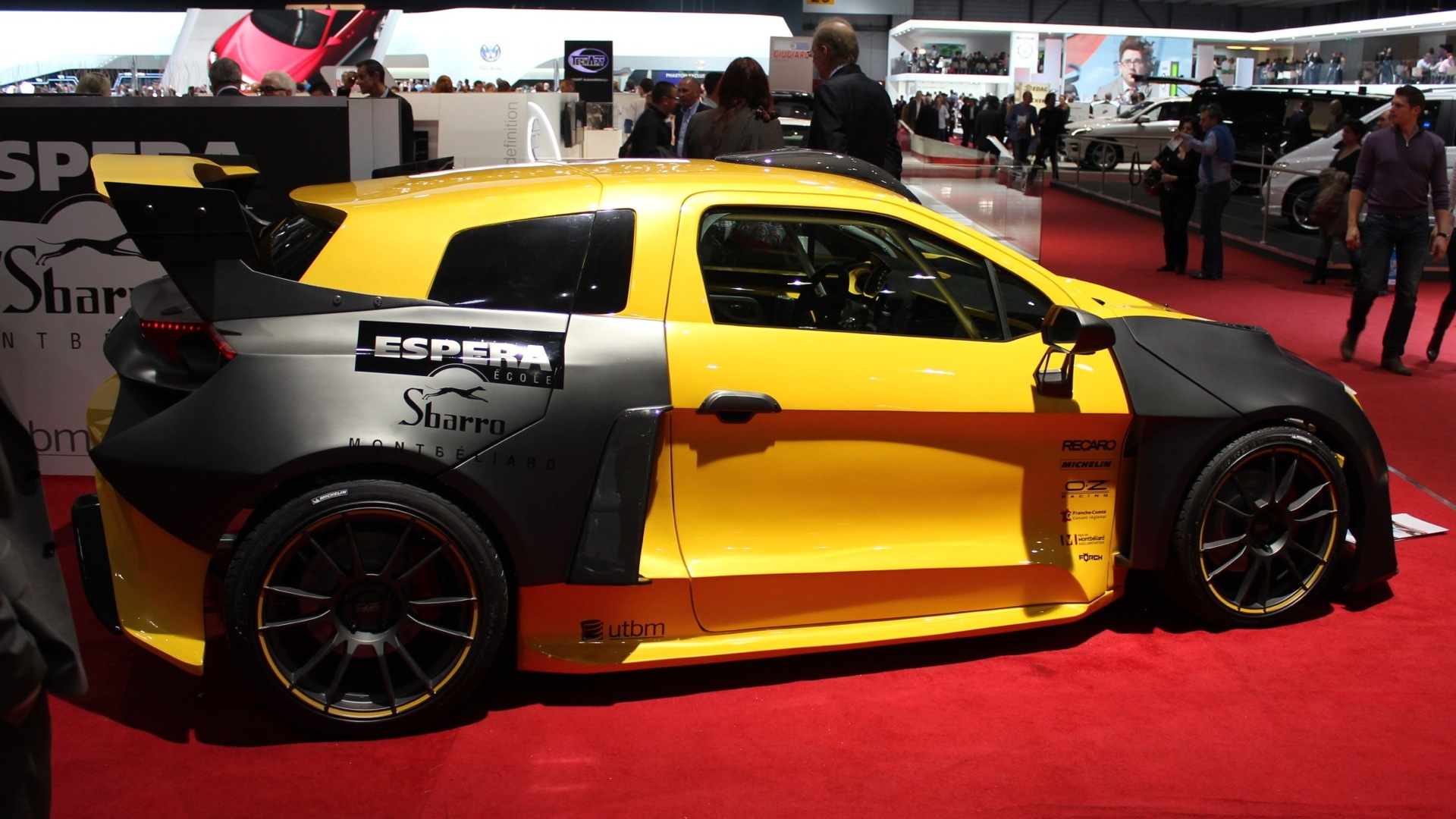 11
photos
The Sbarro Sparta, an all-wheel-drive hybrid rally car that made its debut at this week's Geneva Auto Show, has a lot of great ideas for an affordable production all-wheel-drive performance car.

For instance, the model packs a mid-mounted Peugeot 1.6-liter four-cylinder engine, which drives the rear wheels with a six-speed manual gearbox, all while twin 100-kW electric motors (one for the front wheels, one at the rear)—add up to a total output of about 407 horsepower.

What's all the more surprising is that, outside of the gasoline powertrain, the low-slung concept—which definitely has some hot-hatch charisma in person—doesn't borrow underpinnings or platform components from any existing vehicle. Building it required designing a tubular steel structure, with bodywork done in fiberglass. A sizable 24-kWh lithium-ion battery pack is mounted down low; and surprisingly, the total weight of the car is just 3,080 pounds. Meanwhile, OZ racing rims and Michelin racing tires finish the look.

Inside, it's clear that motorsports was the priority, and the project hasn't gotten around to fine-tuning ergonomics and the nuance of cupholders and cubbies; but the makings of a serious rally racer are here, with a big vertical handbrake lever, a racing cage, and Recaro seats.

Especially of interest here is that through a simple lever, the driver is able to control how electric power is divvied up between the front and rear wheels—so you could dial in more electric boost to the rear to neutralize understeer in a series of tight switchbacks, for instance.

Competition-ready, and soon to be proven

And, surprisingly, a spokesman insisted that the Sparta ready to race—and slated to make its competition debut in less than two weeks.

The concept is fully functional and will run in the Rally Monte Carlo des energies nouvelles (the Monte Carlo New Energy Rally) in less than two weeks. The vehicle is entered in the hybrid prototype category.

But what's even more shocking—and forgivable, when you see the almost-there look of the bodywork and home-made race car look of the interior—is that we're talking about a student project.

It's a Geneva show tradition for the industrial-design school Espera Sbarro—based in Switzerland—to reveal a new vehicle at this show, where they're given a prime position on the show floor.

Sbarro finished the new car just five days before its Geneva Auto Show debut, and it took just 84 days for the 27-member team to design and build.

This is the second time that students have prepared a hybrid concept. And while the vehicle itself is definitely not destined for production, individual design elements and innovations might follow students to whatever companies hire them after completing the school.

Sbarro doesn't yet have official information on the Sparta Concept to peruse online, but go here to browse their previous prototypes and concept efforts (like last year's Réact E.V.).