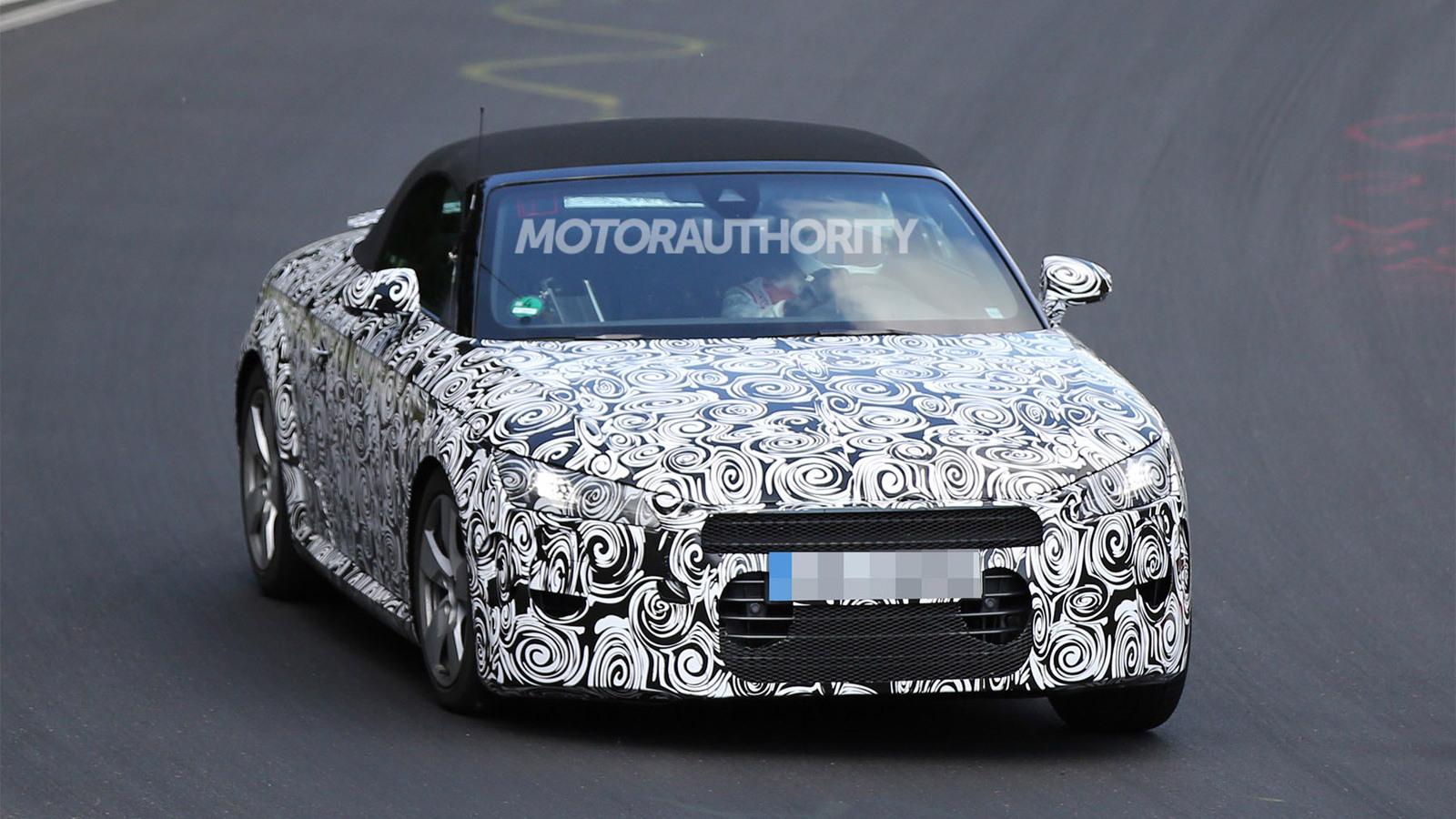 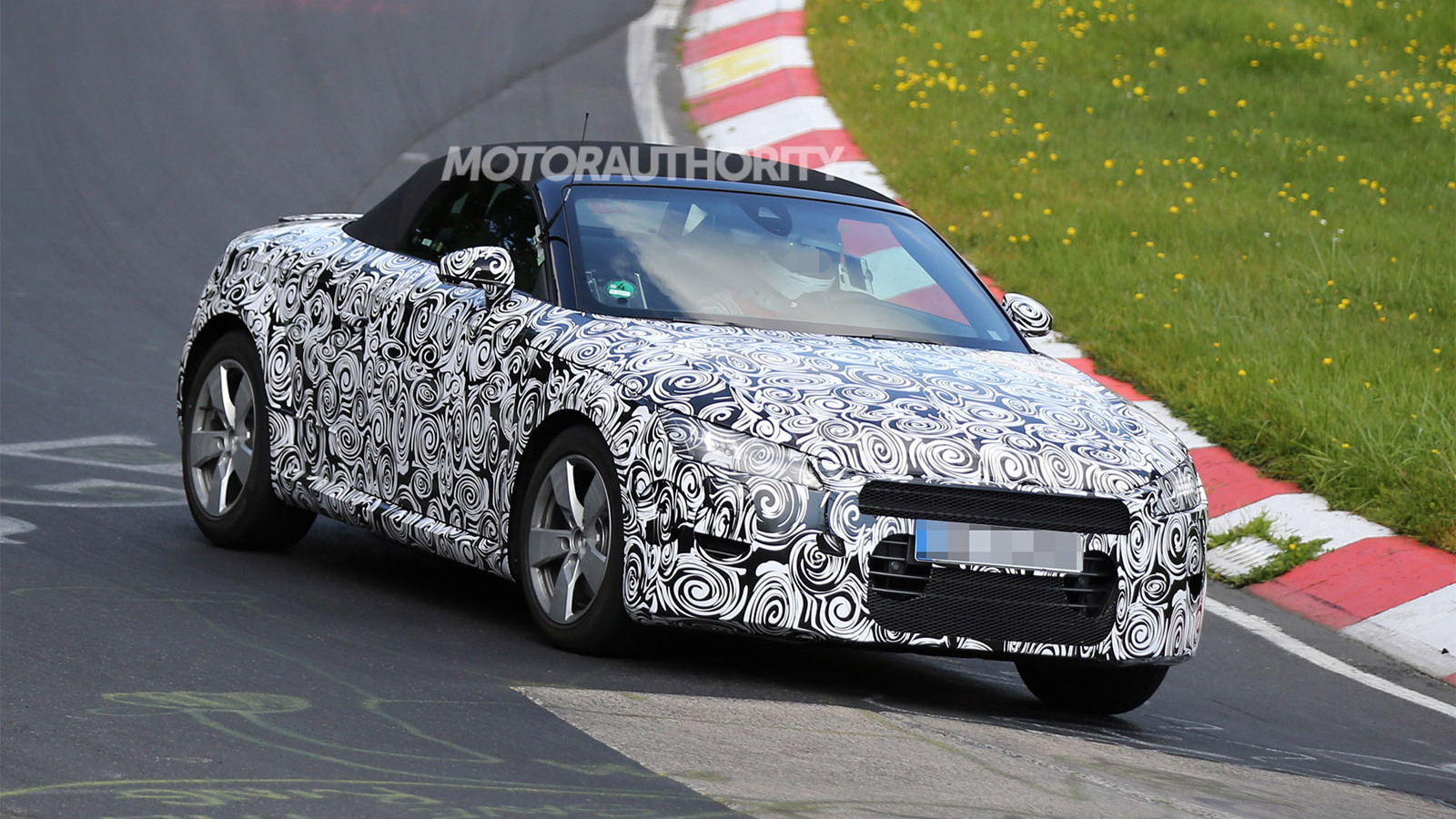 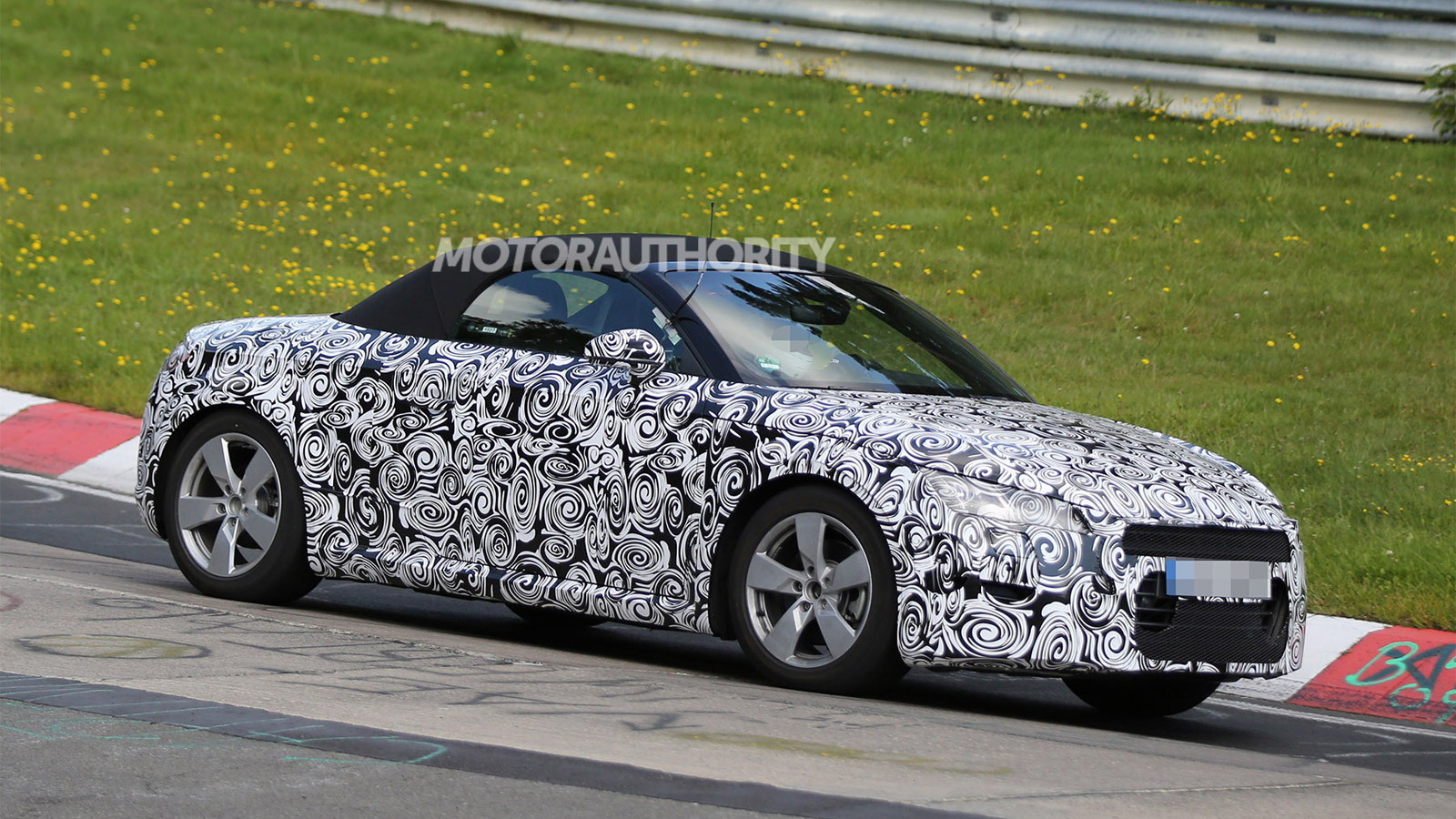 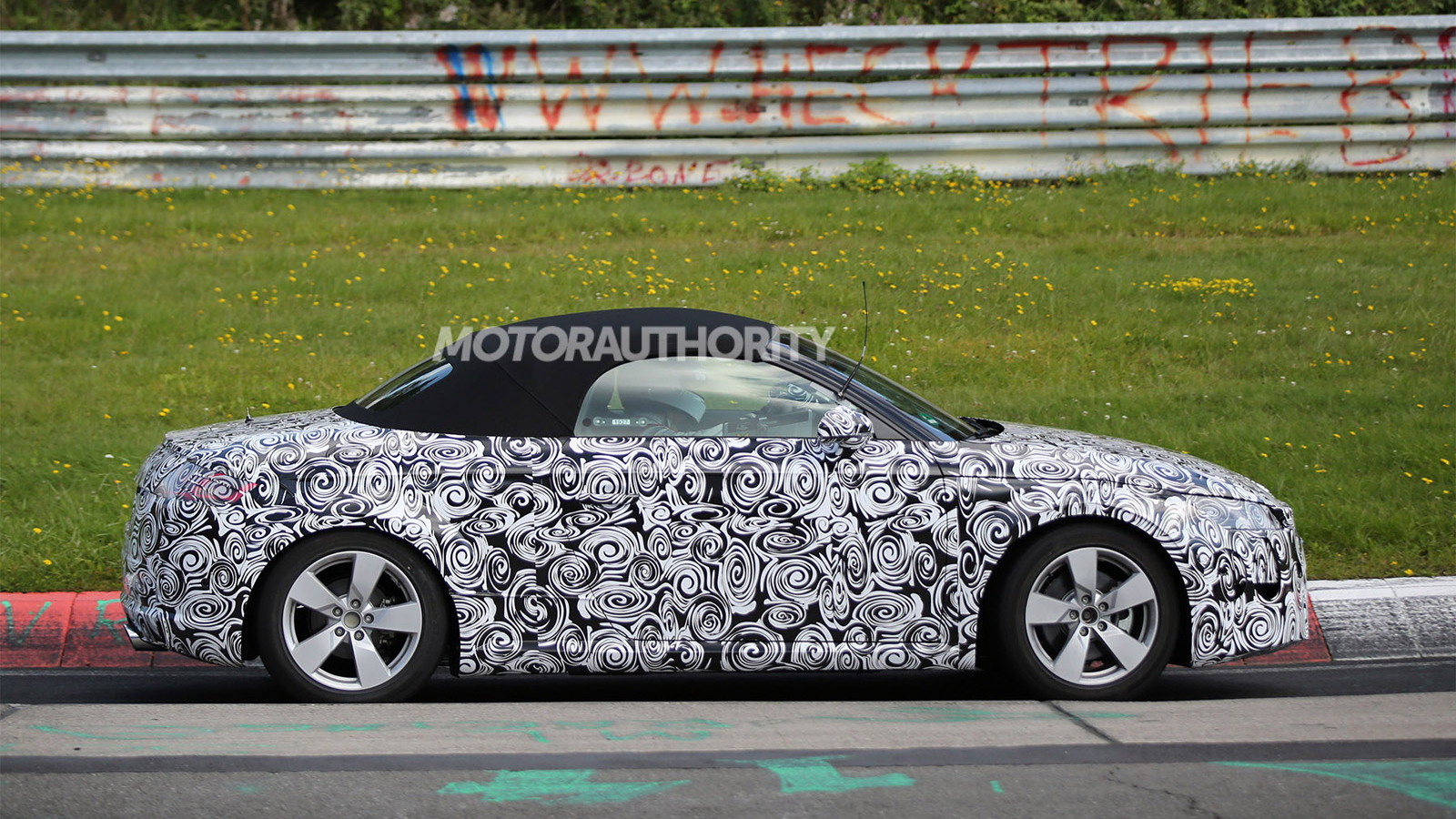 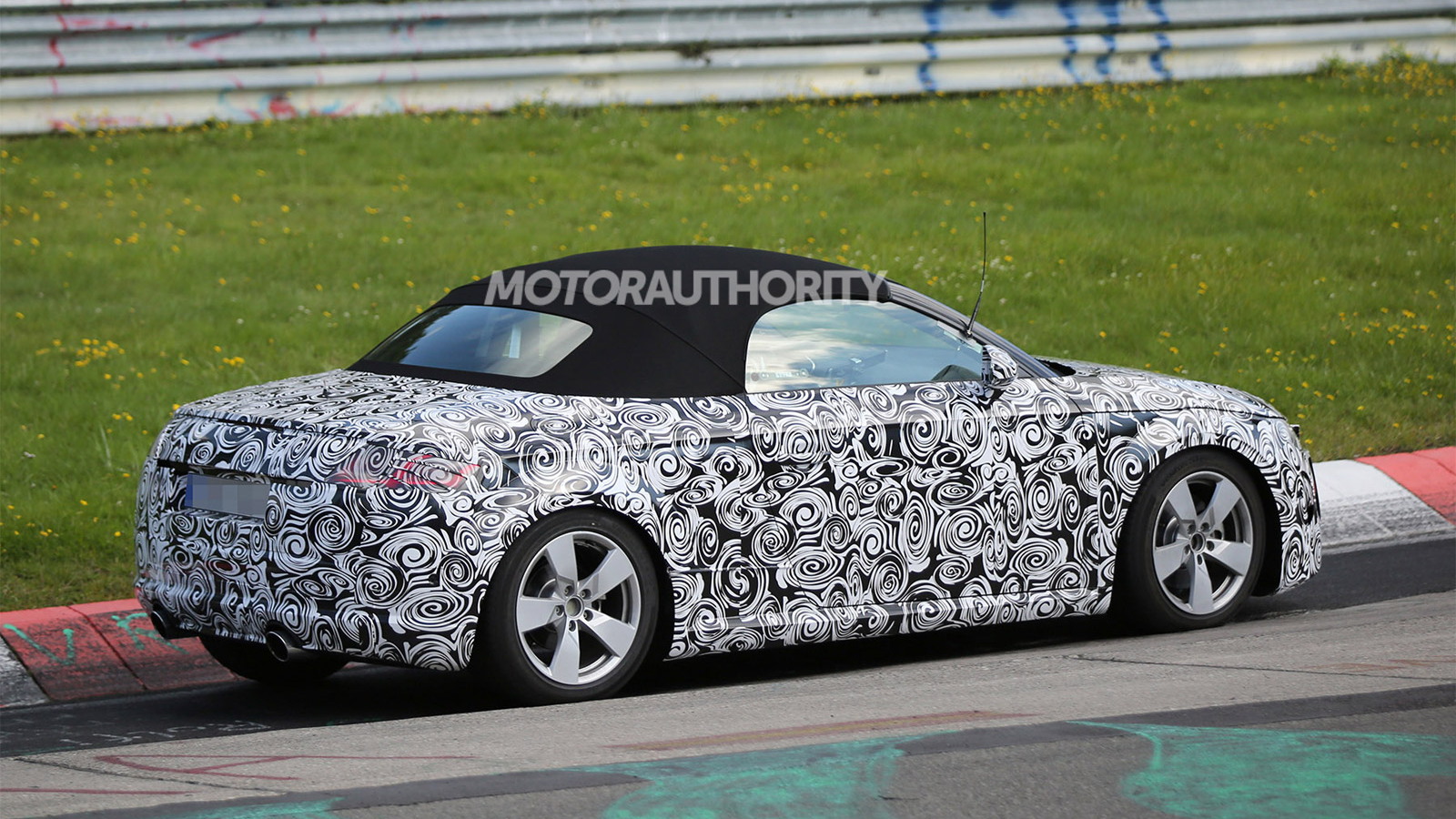 42
photos
Prototypes for the convertible version of the upcoming 2016 Audi TT coupe have been spotted again, this time undergoing high-speed testing at Germany's Nürburgring. The new convertible is expected to debut in the coming months and join the coupe in showrooms early next year, also as a 2016 model.

The convertible TT will continue to be known as the TT Roadster and as the spy shots confirm it will also continue with a conventional soft-top roof. This should ensure the car remains light and agile. The spy shots show the new TT Roadster with its top up as well as down, and also reveal the design for the new anti-roll bars, wind deflector and tonneau cover.

Apart from these details, the new TT Roadster should be identical to the coupe. This means an overall length of 13.7 feet and wheelbase of 8.2 feet. The dimensions are similar to those of the outgoing model, although the wheelbase is slightly longer.

Underpinning the car is the Volkswagen Group’s flexible MQB platform, which is already found in cars like the 2015 Audi A3 and 2015 Volkswagen Golf. In the U.S., the TT Roadster will be offered in base and TTS trim, both of which are powered by a common 2.0-liter TFSI engine. In the base model, the turbocharged and directed four-cylinder will pump out approximately 230 horsepower and 272 pound-feet of torque, while in the TTS it will be good for approximately 310 hp and 280 lb-ft of torque.

The base model will come with front-wheel drive and available quattro all-wheel drive, while the TTS will get the quattro system as standard. A six-speed manual will be standard, with a six-speed S tronic dual-clutch gearbox available as an option.

Audi has stuck with a minimalist design for the cabin. The highlight is the new ‘virtual cockpit’ where all information, including infotainment as well as speedometer and tachometer details, is presented through a fully digital 12.3-inch display located behind the steering wheel. This replaces the need for a central MMI monitor, though the passenger can still get feedback on climate settings through a digital display located directly in the air vents.