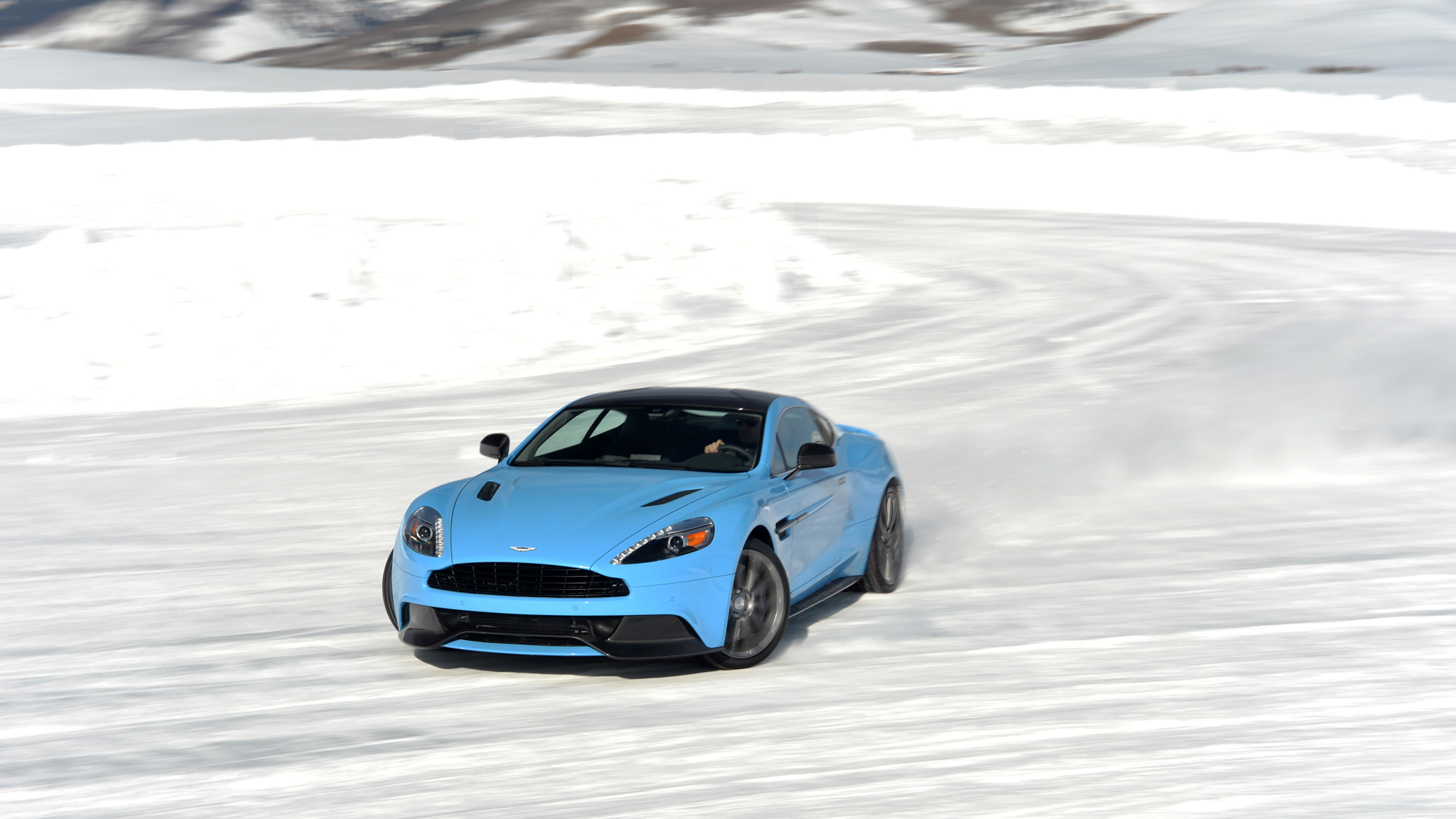 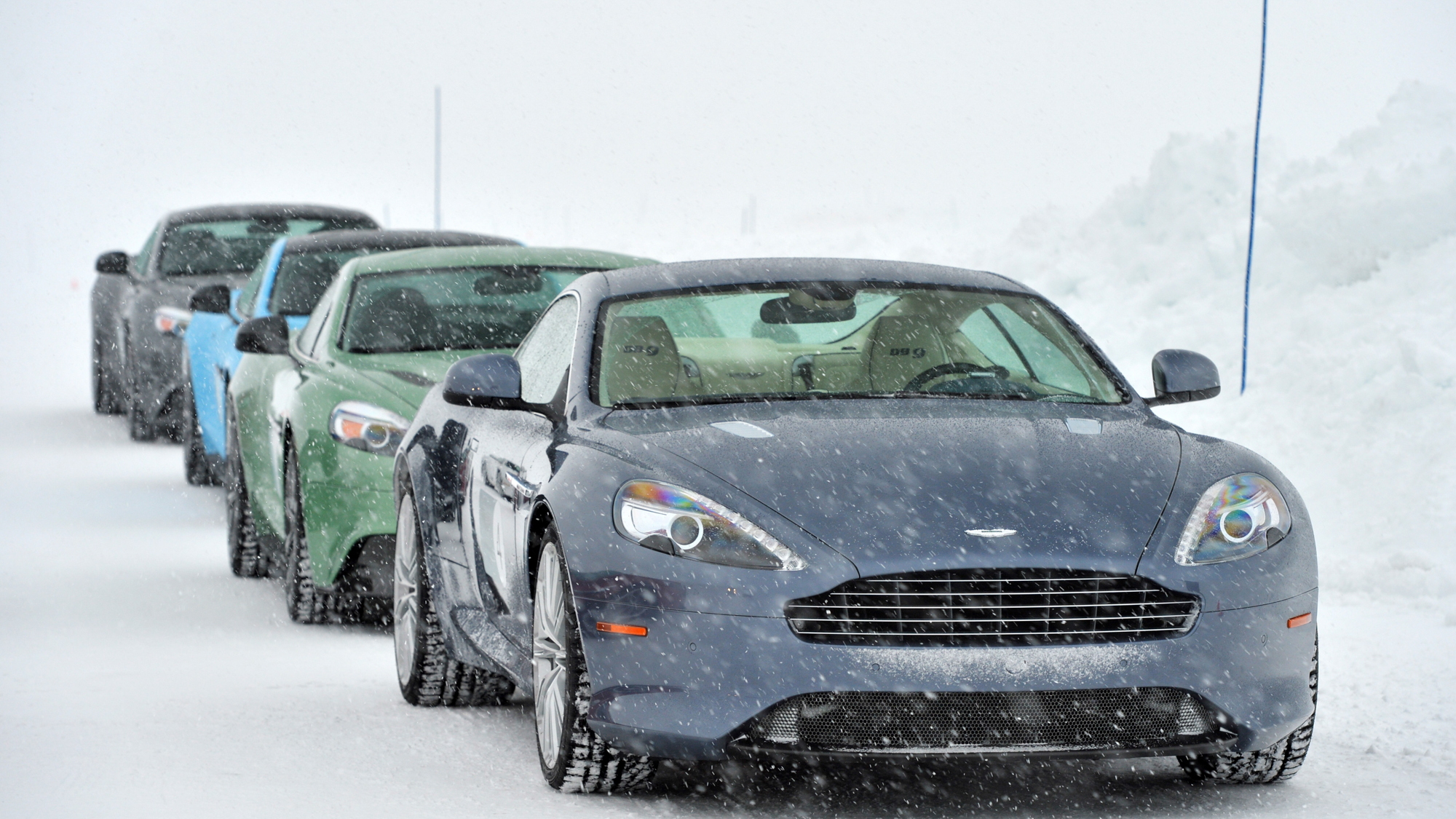 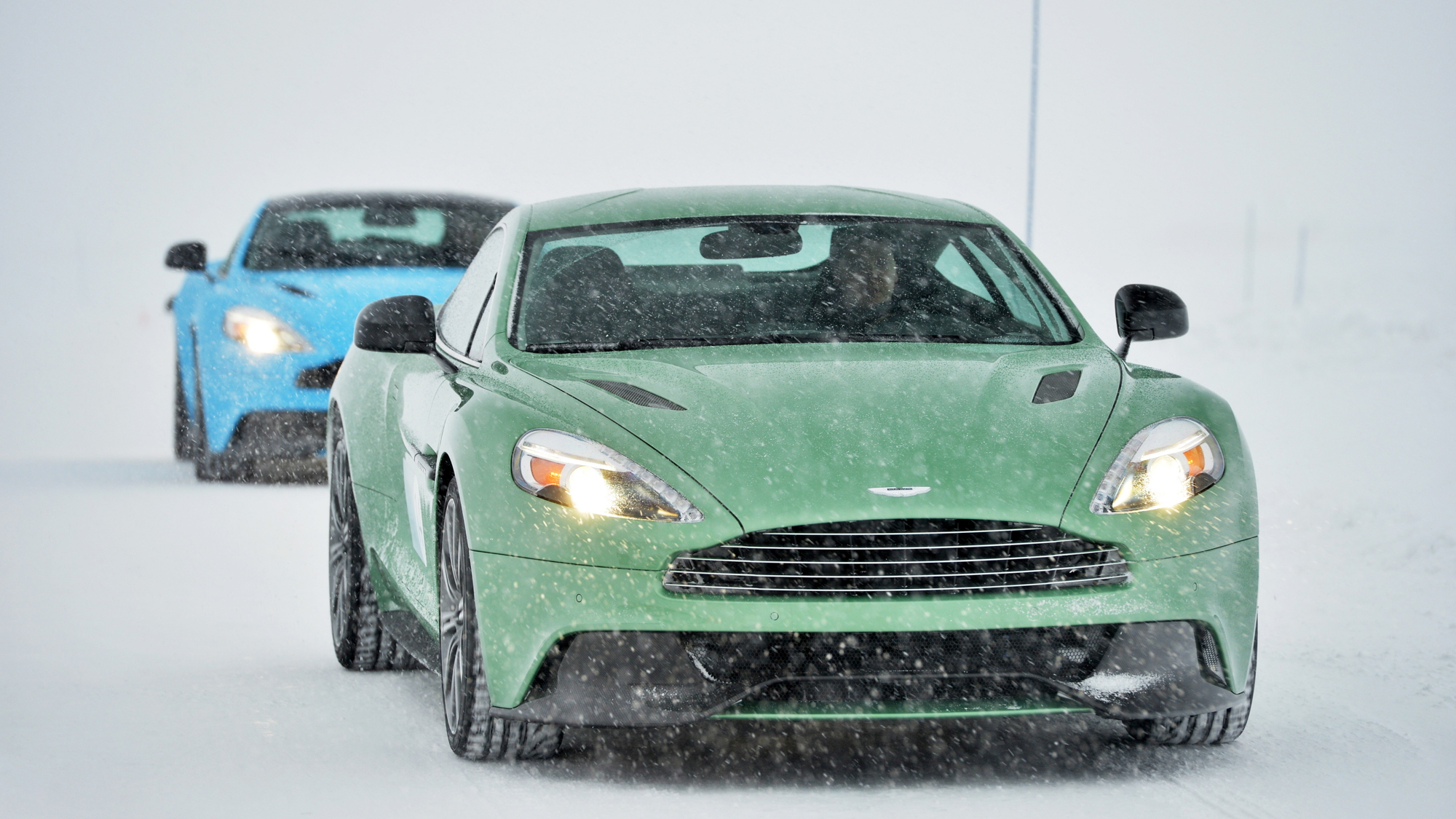 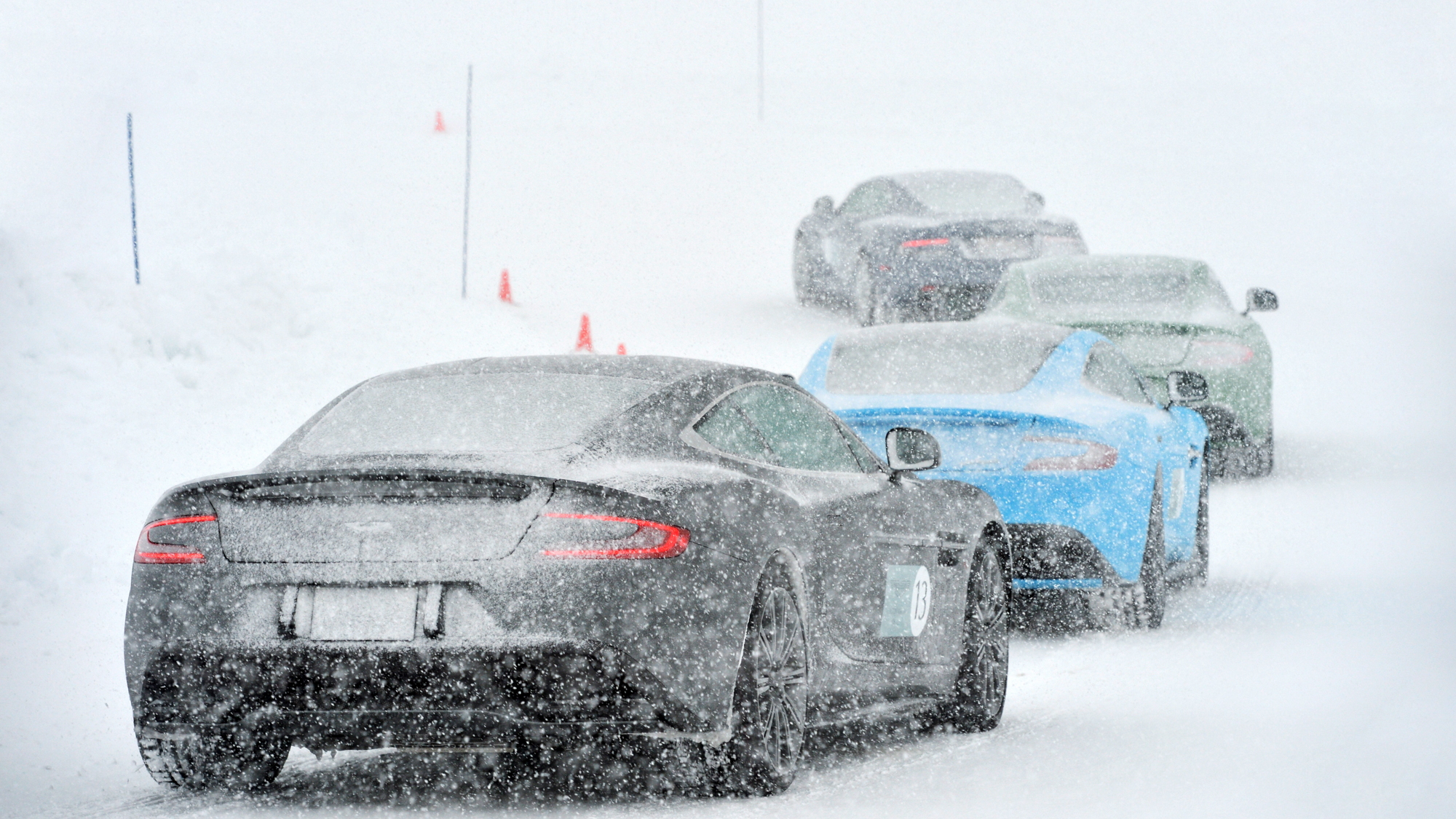 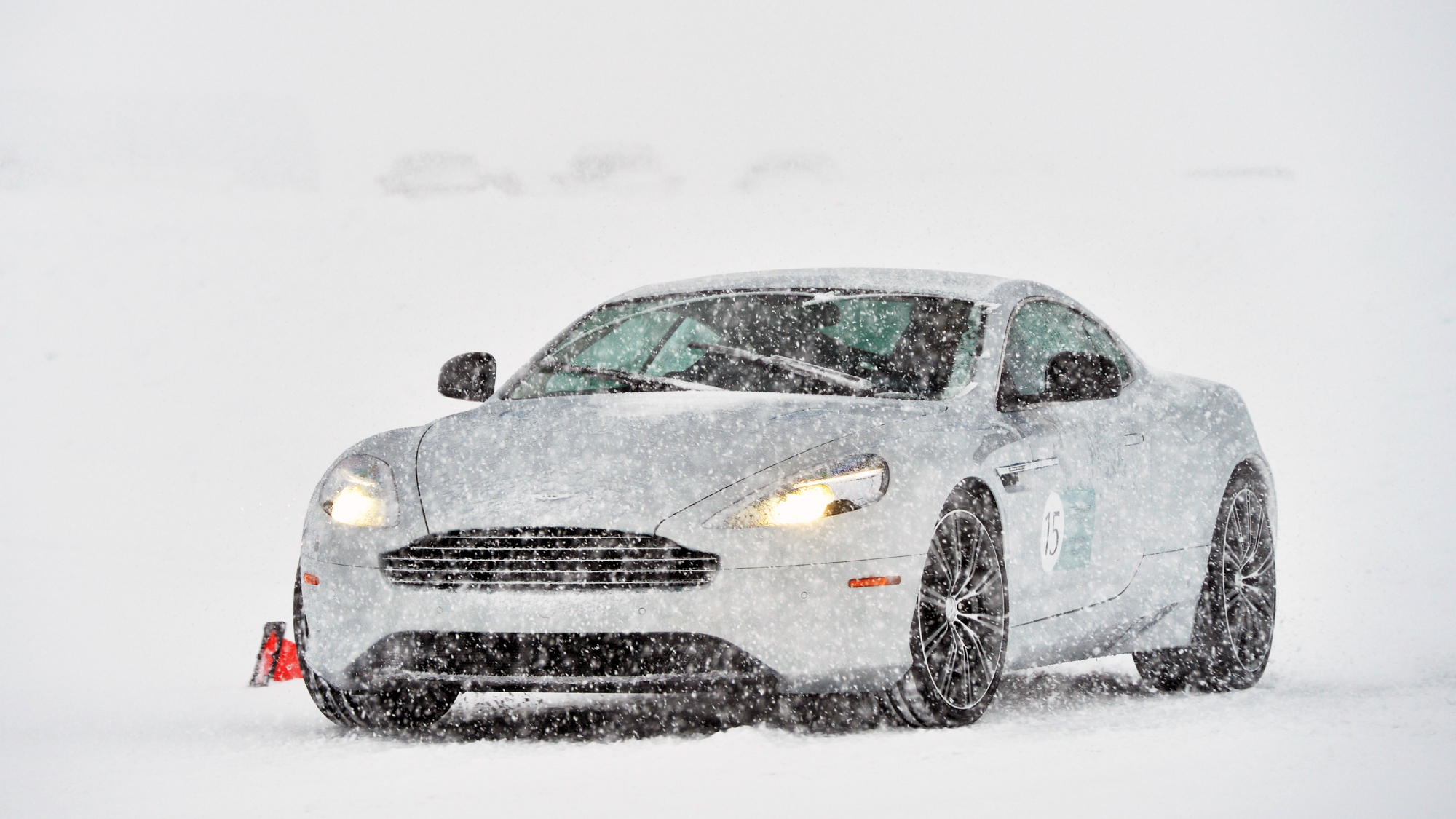 That’s what the display says inside the car. The air outside is cold, crisp, and very Colorado. Winter means snow, and there’s plenty of it on the ground. It’s far from the ideal place to drive any vehicle that isn’t equipped with Mattracks.

Still… I’m an adventurous type, so I’m lined up at a starting gate, itching to tackle a race course built into a snowy field. I have a 565-horsepower V-12 engine ready to send power to the rear wheels. Say hello to lots of opposite lock steering… and say hello to the Aston Martin on Ice driving program.

Crested Butte, Colorado is the exact image you have in your head when you think of a small ski town. It’s part college kids, part friendly legal stoner hamlet, and part wealthy folks ready to go skiing and snowboarding. It’s also home to a property called Scarp Ridge Lodge, which is owned and run by the Eleven group.

Imagine the nicest vacation property you’ve ever stayed in, then blow that up and realize it won’t ever be as nice as Scarp Ridge. That’s the name of the game with Eleven. They own their own mountain, which is just for you and your guests to enjoy. Should you wish to push a little harder on the skiing and snowboarding front, you can opt to head to their Iceland property for some heli-boarding. Eleven is on top of their game, and now they have a fresh trick up their sleeve with the new-to-the-States Aston Martin on Ice driving program.

These are cars that probably never see rain, never mind snow, but here I am freezing my ass off and trying not to stuff a rather pricey machine into a snow bank. OK… I have the heated seats on, so I’m good there. I’m also surprisingly good in terms of traction. How is that even possible? It’s a mixture of downright shockingly impressive Pirelli winter tires, and excellent driving instruction.

My day starts with some very brief discussions on what to expect. The real action happens on the snow, and that’s why I move quickly from talking about driving these Aston Martins to actually piloting them on the white stuff. The full course is broken down into multiple sections. I get a lesson in full-bore ABS braking, threshold braking, and then trail braking intertwined with throttle application in order to exit a corner successfully.

From there it’s a slalom lesson, which takes place across a long corner. This means you’re moving the car back and forth over the slippery stuff, while also taking a turn. Lateral movement is the name of the game, especially in a car like the new V12 Vantage S. With its short wheelbase, it’s the twitchiest of the bunch, but it also proves to be quite agile when it comes time to get the rear rotated and the nose ready for the next corner.

Finally, I get a skidpad assignment that helps me understand the balance between understeer and oversteer. Don’t dial in more steering when you’re plowing, and dial in a healthy dose of smooth steering when your trunk wants to play "swapsies" with your hood.

Day one ends with many lessons learned as the sun sets over glorious snow capped peaks filling nearly every distant direction. Day two, however, is just a spin of the Earth away, and will give way to full-course Aston Martin sideways goodness.

As the sun rises in Crested Butte, a pack of Aston Martin machines roar to life. Like a gaggle of grizzly bears awakened early from hibernation, 12-cylinder pieces of art snarl, burble, and echo across the snowy plain. Icicles hang from carbon fiber trim pieces and snow-white smoke mixes with glorious noise then billows from the dual exhaust outlets. The course is open, and I’m actually going to push these $200,000 to $300,000 ballistic British bullets across a landscape you’d try to avoid in a truck.

Here’s where the magic happens though, because all of the lessons from the day prior join forces in my brain to link together lap after lap of slideways excellence. These Aston Martin machines are the sort of vehicle that one might expect to sit stuck in any form of snow, tires spinning helplessly, driver equally helpless to initiate forward momentum. The opposite is happening here in Crested Butte. Leaving the line is expectedly slow, but a quick shift into second gear reduces the amount of torque flowing rearward and gives the tires a moment to find traction.

When it comes time to slow for a corner, the anti-lock brake system can be useful but it's surprising just how well you can shed speed without diving into the ABS. After that, it's simply a matter of making sure you get the nose pointed correctly and applying throttle in a smooth manner. A few early laps are done in full traction control mode, but most of us switch to the TRAC setting so we can get the rear end swinging a bit wider while also maintaining the power we require. In the TRAC setting, the cars will allow for greater slip angles provided your inputs are smooth. This means no sawing at the wheel and no stabbing of the gas. Keep it smooth, and you're going to feel like the winter warrior version of a Formula Drift champion.

As the skies grow darker and the snow continues to fall, the course becomes far slicker than when the day began. Our lines have to change to adapt to the conditions. The snow is where the grip is hiding and the shiny stuff is what you want to avoid if you want to be quick. As we stick to the early lines, our tires push the snow to the side revealing the smoother surface below. Add in the fading sun, and you've got a track that can offer different lines from lap to lap. It's a challenging day, but the skill reward levels are high. These lessons can be applied, not just to driving on slick roads, but to on-track driving as well. Pushing a car to its limit means exploring the level of grip available. On these snow-covered corners, we consistently exceed the available grip but we're doing so in a manner far slower than we would on a track. The recovery procedures are nearly the same, and practicing them over and over in a slower environment will pay dividends on dry tarmac with faster speeds.

A day of snow driving comes to a close, yet each Aston Martin vehicle seems eager and ready for more despite the falling temperatures. If you would've told me that an Aston Martin would be able to run lap after lap of a snow circuit, I'd tell you that you're mad and to find me a Subaru WRX STI. That Subie would very likely be quicker around the snow course, but it certainly wouldn't look as good getting sideways. Regardless, that's not the point of this course. On the surface, the Aston Martin on Ice program is a means for dealers and customers to form a relationship, get a bit of a luxury vacation, and have some fun in the snow. At its core, however, this is a true driving school that teaches slower-speed fundamentals that can translate into higher-speed skills and control levels.

...and it's done in cars fitted with contrast-stitched, heated leather seats. That part is a bonus that would make even Bond himself smile.