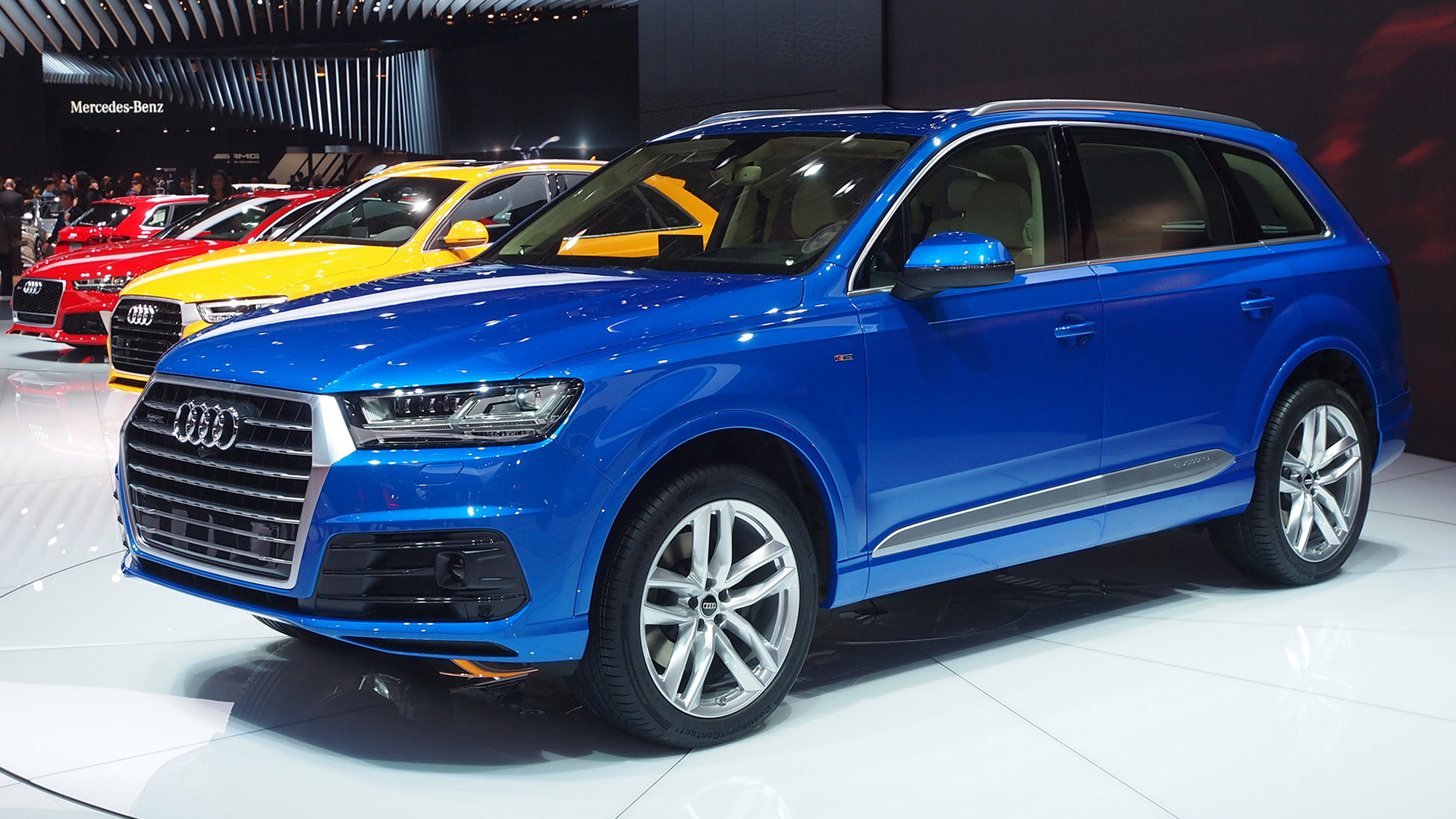 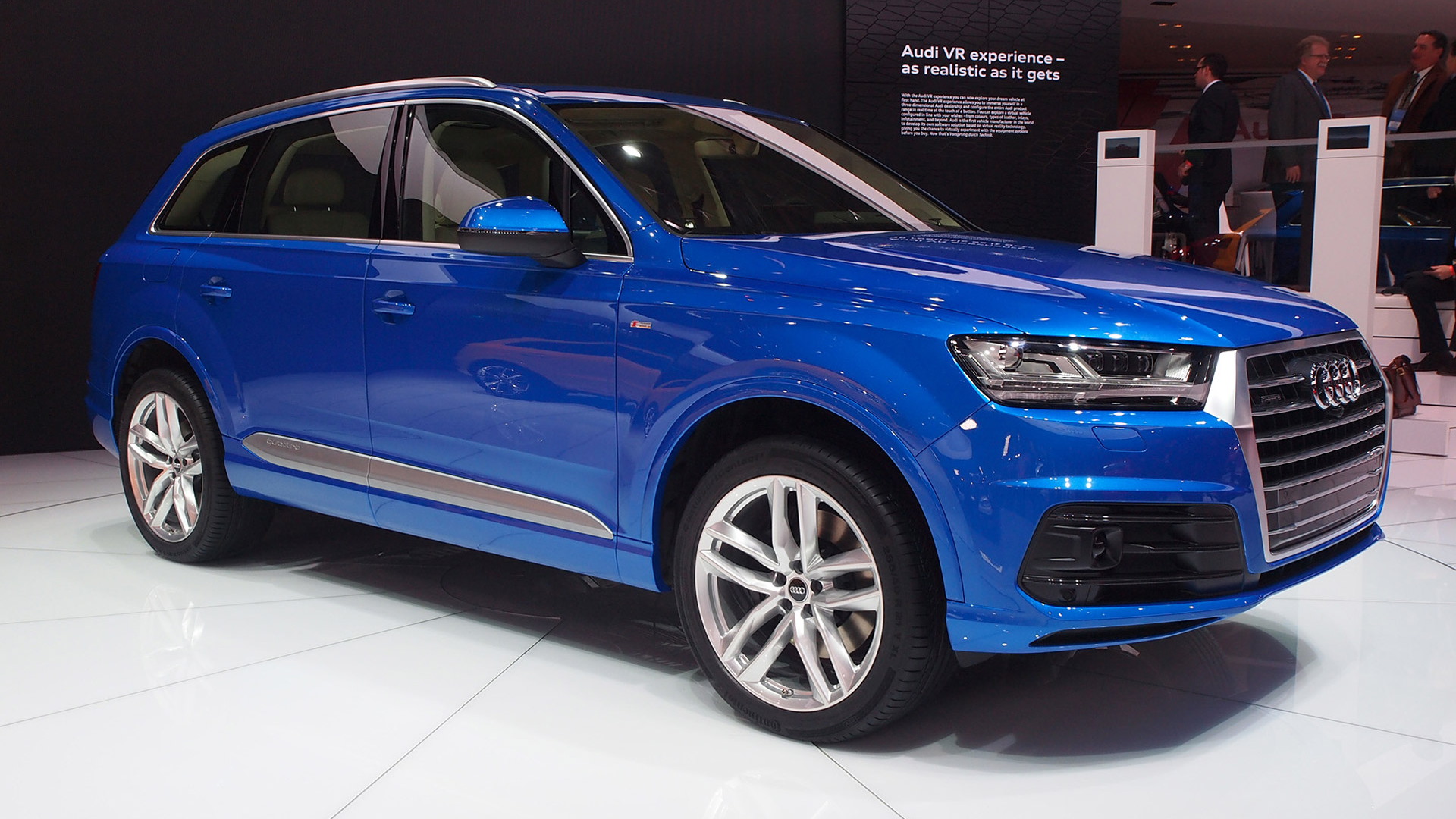 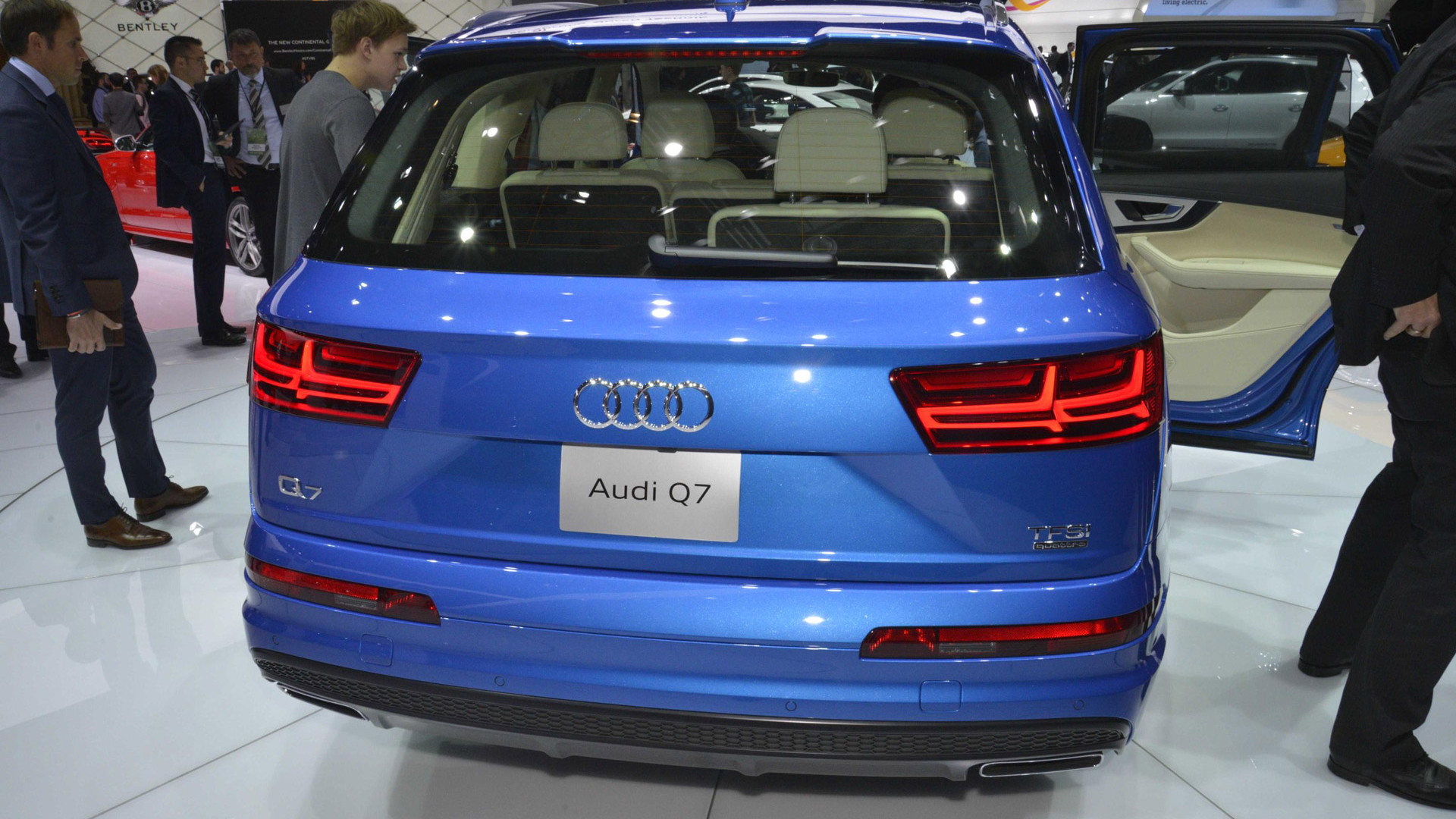 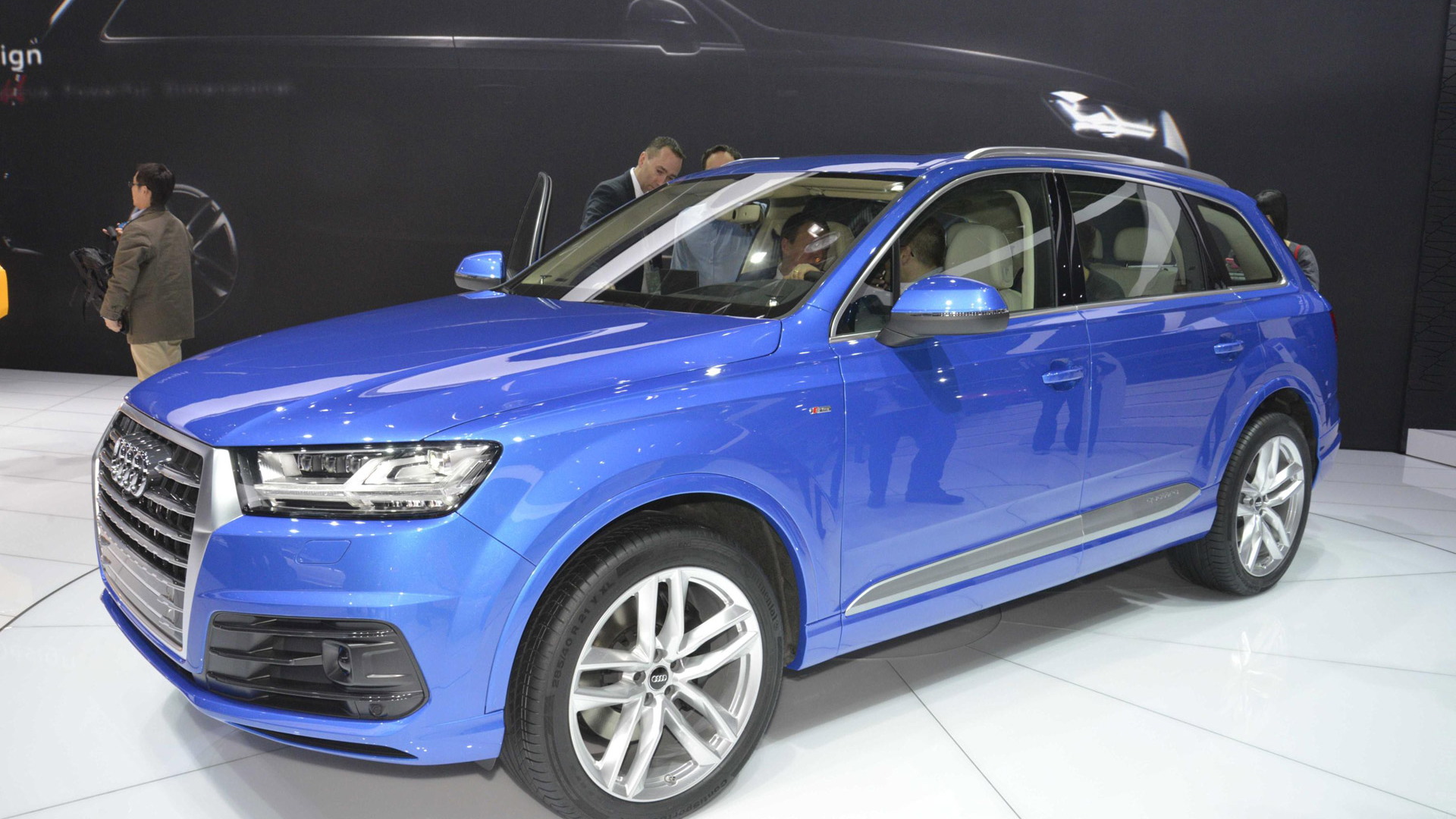 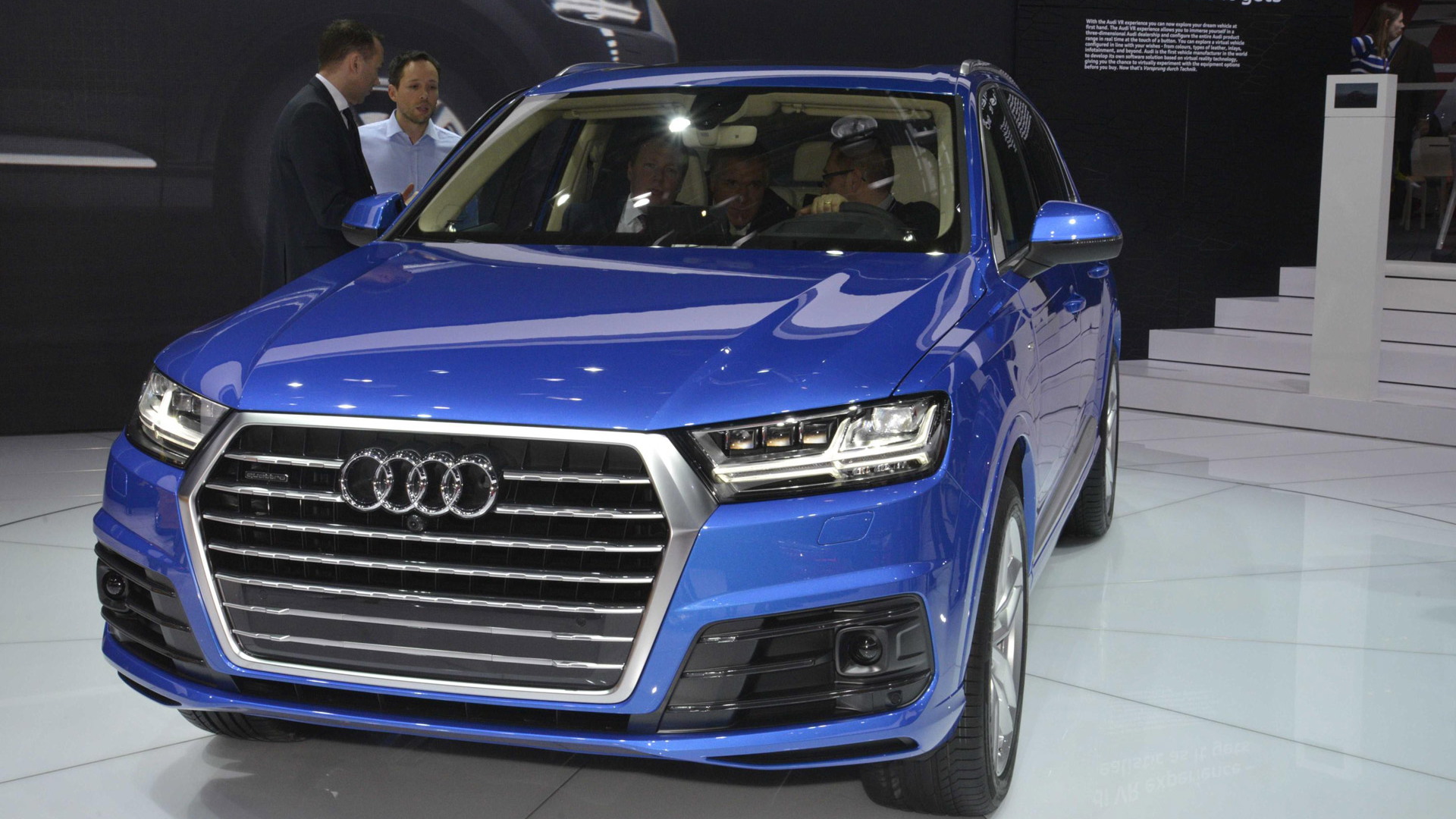 26
photos
Audi’s all-new 2016 Q7 has been revealed in full at the 2015 Detroit Auto Show, ahead of the vehicle's showroom debut later this year. These latest photos reveal a handsome albeit somewhat familiar look for the new Q7, but while the exterior may not have changed much engineers have totally revamped things underneath the sheet metal.

Underpinning the vehicle is the first iteration of the Volkswagen Group’s new MLB Evo platform, specifically the SUV version of the platform. The platform is an evolution of Audi's existing MLB structure but is lighter thanks to multi-material construction. Ultra-high-strength parts made of hot-shaped steel form the backbone of the occupant cell. Aluminum castings, extruded sections and panels are used in the front and rear ends as well as the superstructure. Other parts made entirely of aluminum are the doors, the front fenders, the hood and the rear hatch (see video below).

How much lighter is it? A substantial 716.5 pounds lighter in 3.0-liter TDI trim, for instance. The 2016 Q7 TDI measures in at 4,398 lbs, making it one of the lightest options among seven-seat SUVs in the premium segment. At the same time, it is one of the most spacious in its segment despite its exterior dimensions shrinking. 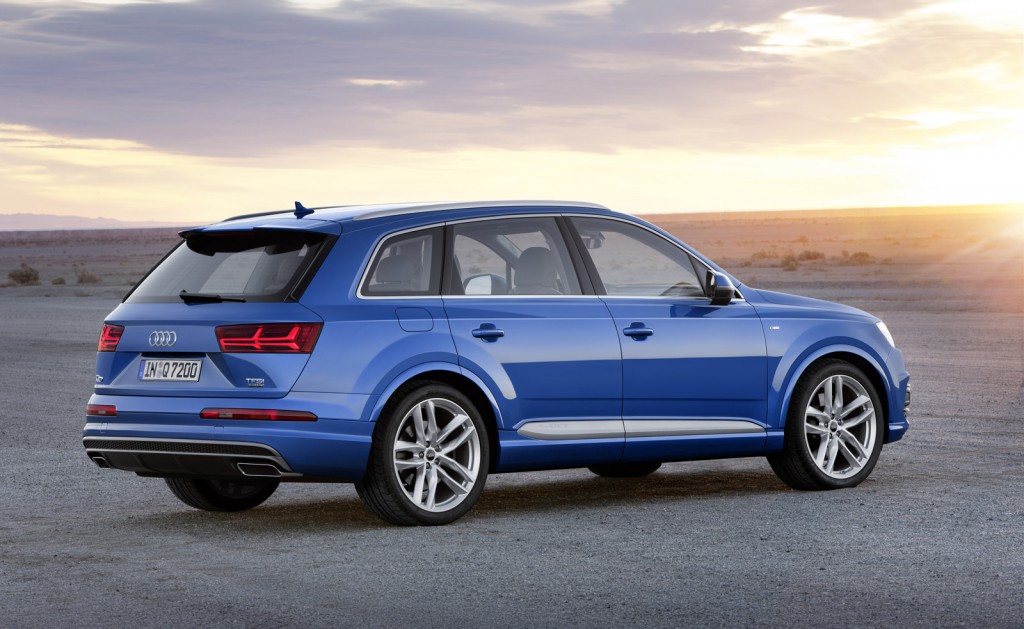 Further down the track Audi will add a second 3.0-liter TDI option with just 218 hp and 369 lb-ft, though this model is unlikely to reach U.S. shores. Instead, we’re expected to get access to a Q7 e-tron quattro model soon after next year’s launch. This will be a plug-in hybrid combining a 3.0-liter TDI with an electric motor for a combined output of 373 hp and 516 lb-ft.

According to Audi, the Q7 e-tron quattro will return a combined fuel economy of 138.4 mpge. It will also be the quickest of the bunch, needing just 6.0 seconds to accelerate from 0-62 mph. Top speed will be a tick under 140 mph.

A quattro permanent all-wheel-drive system remains standard across the 2016 Q7 range, but one major new feature is all-wheel steering. At low speeds the rear wheels steer opposite the front wheels, making the vehicle more manoeuvrable for parking, and at higher speeds the rear wheels follow the movement of the front wheels to aid stability. This works in conjunction with an electrically-aided steering system. 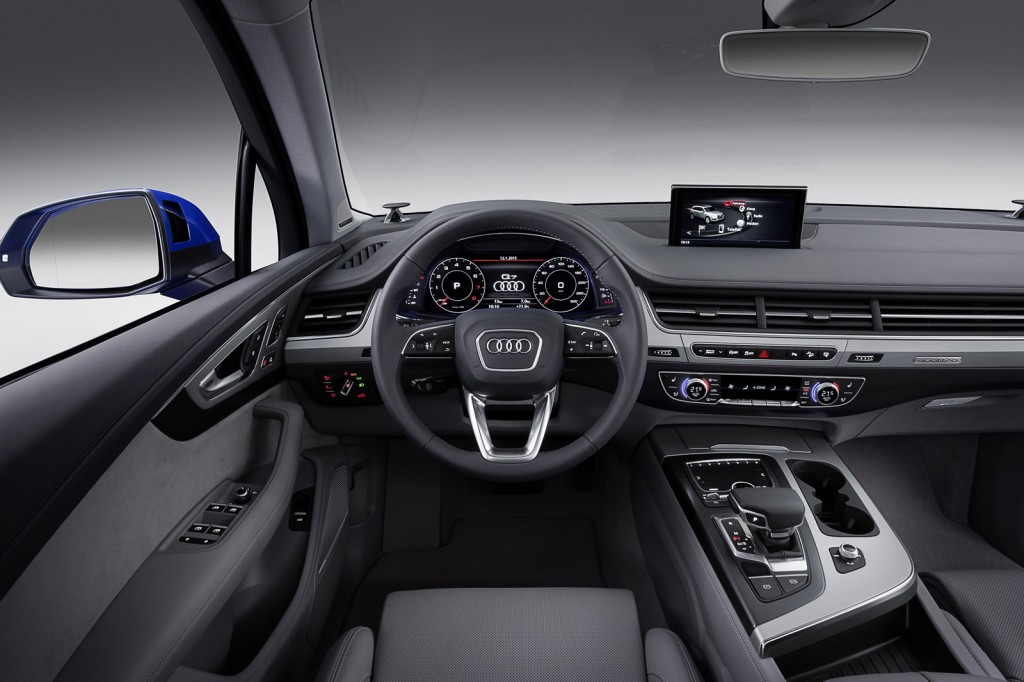 Inside the cabin, Audi has stuck with its ‘virtual cockpit’ theme first scene in the 2016 TT sports car. Essentially, many of the vehicle functions are now controlled through the vehicle’s new MMI all-in-touch interface with haptic feedback. The driver can enter characters on the large touchpad or perform multi-finger gestures to zoom in on the map or scroll through lists, for example. The main functions can be accessed using the high-quality rotary pushbutton, two rocker switches or voice recognition.

The voice recognition system is said to be much simpler. Drivers no longer have to stick to predefined commands. The system understands phrasings from everyday language, meaning that hundreds of command variations are possible for each function. In the telephone menu, calling a contact is as easy as saying “I want to talk to Peter” or “Connect me to Peter.” But the navigation system also reacts to simple commands such as “Where can I get gas?” or “I want to eat something.”

Smartphone integration with Google Android Auto and Apple CarPlay is also possible. For the trim, buyers will have a number of soft materials, aluminum and wood options to choose from. One final highlight is the comprehensive portfolio of new driver assistance systems, including adaptive cruise control with traffic jam assistant that allows the vehicle to crawl in traffic autonomously. On top of this, Audi tells us that more advanced systems will be coming soon.

Additional Detroit Auto Show coverage can be accessed via our dedicated hub.