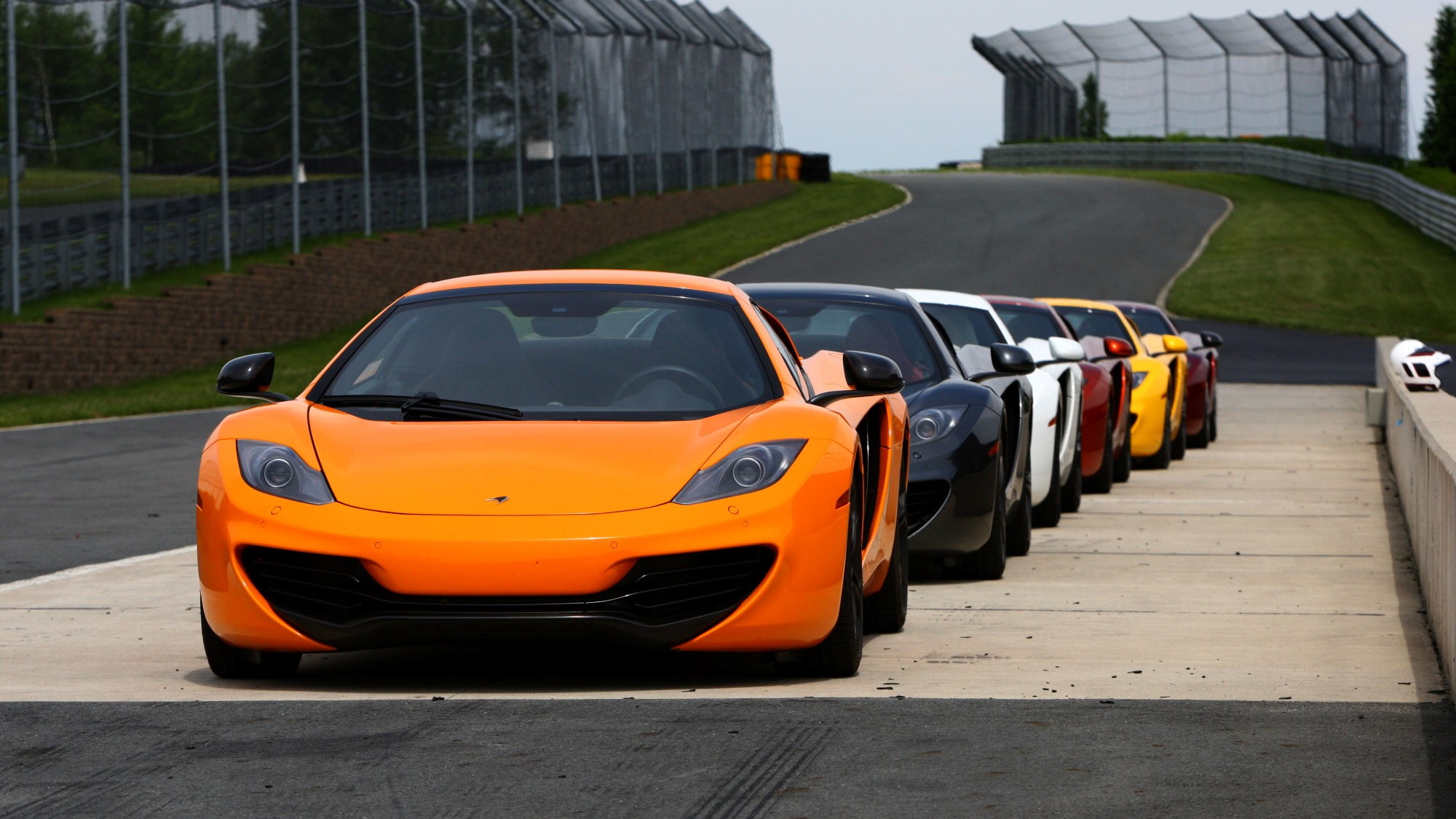 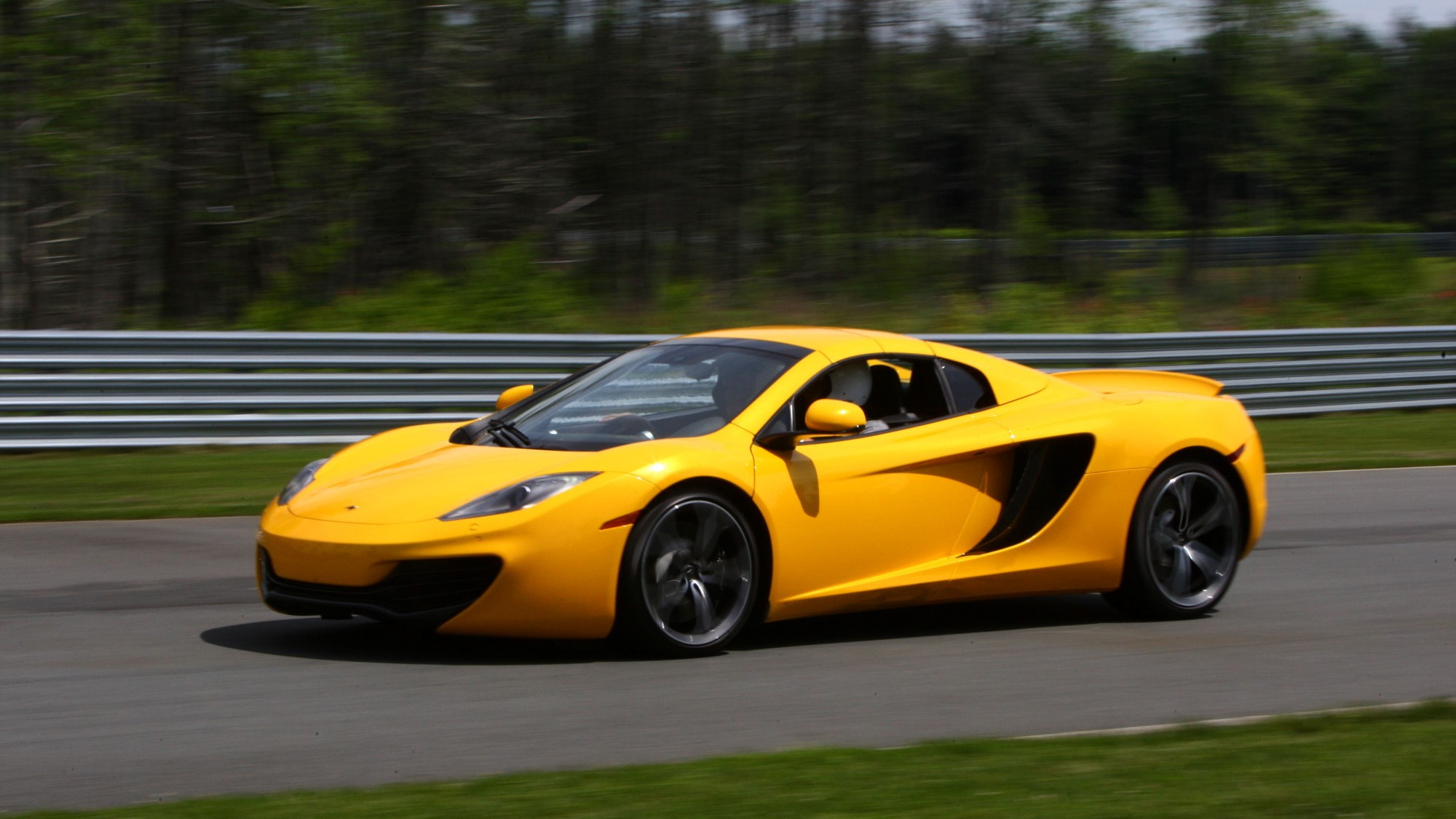 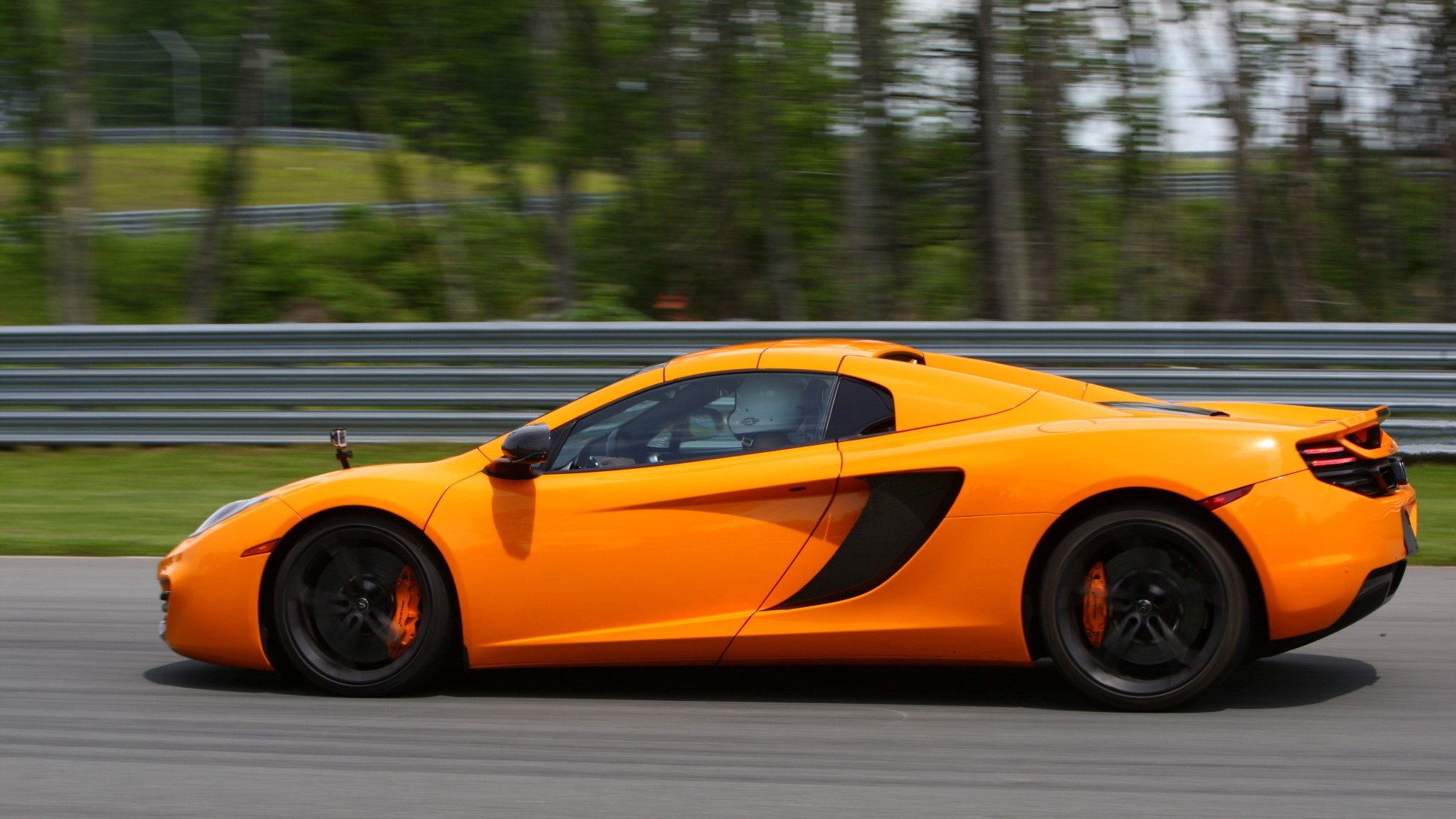 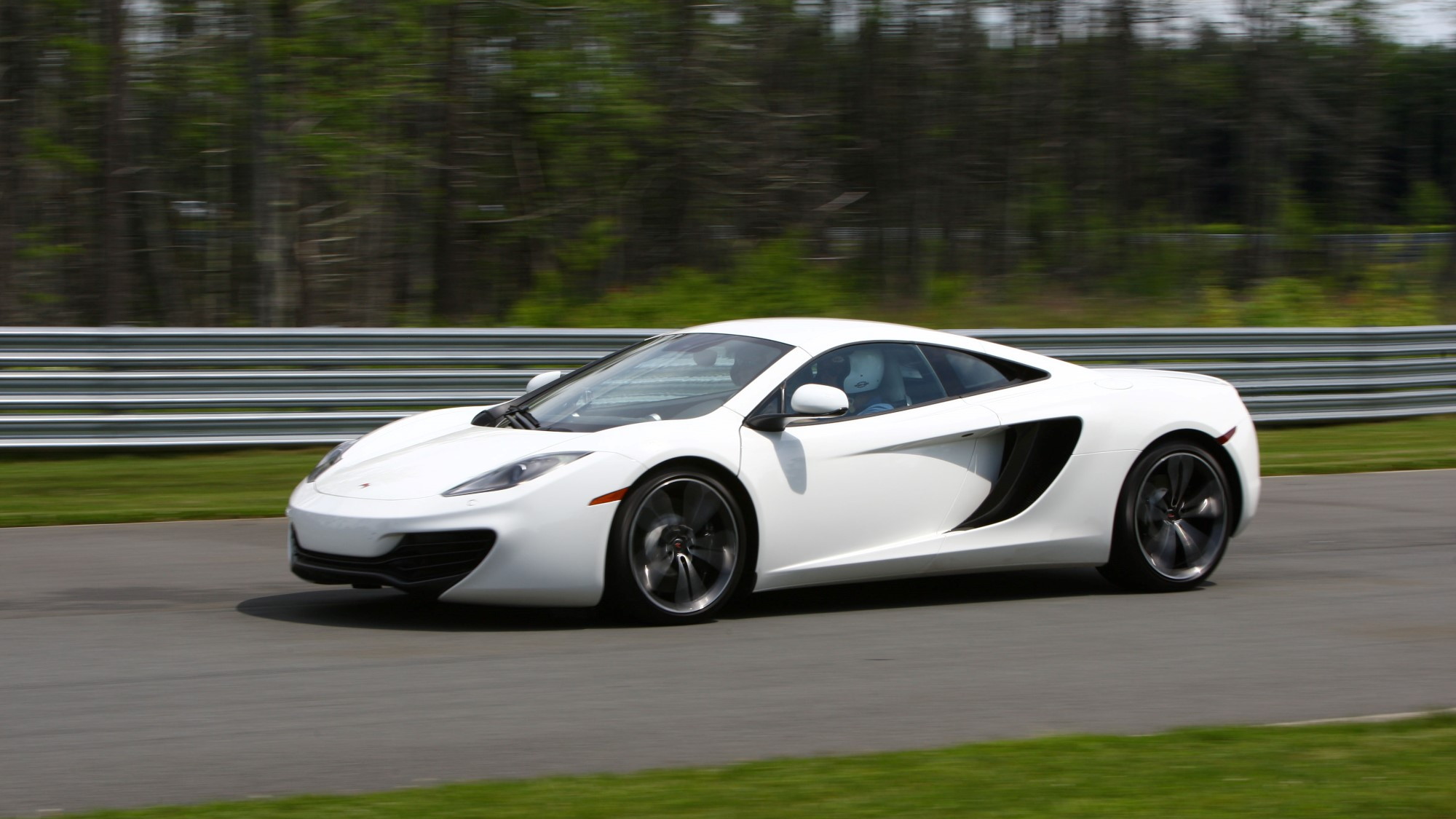 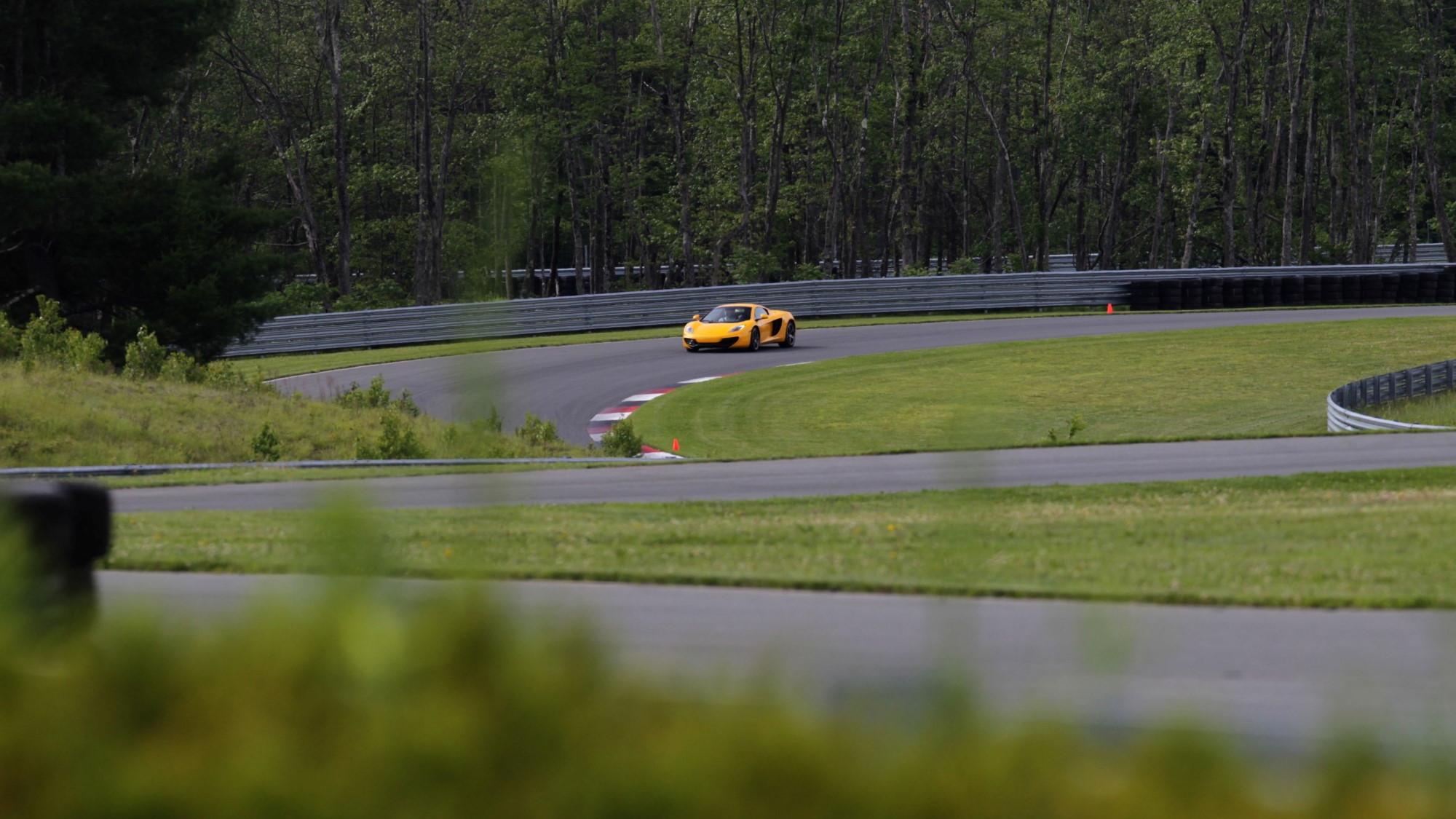 51
photos
There are few cars that are actually abhorrent to drive on track, though there are many ill-suited to the task after the first lap, or even less. It's almost always fun to drive a slow car fast, especially if it has some dire handling deficiency, to be overcome by technique and anticipation--as long as there's no clock running.

But driving a fast car on track is entirely different. It can be rewarding, challenging, and obviously quite fun. But it can also be extremely difficult, frightening, and even dangerous.

Why? Because fast cars are, well, fast. And speed, rather than some innate handling or balance defect, is what causes mistakes to become massive accidents. Of course a fast car with a massive tendency toward end-swapping can be doubly frightening, as it increases the chance of error as well as the force of impact; but most fast cars are actually reasonably well-behaved, precisely because they are fast.

The 2013 McLaren MP4-12C Spider takes the idea of a well-behaved fast car to its epitome. Anyone who has pushed a mid-engined car of any sort hard on track knows that its low polar moment makes for good maneuverability, but can also make for tricky-quick spins that are hard to prevent or recover. With the 12C Spider, that's simply not the case.

Oh, it's fast, and blazingly so. The turbo comes on song at a reasonably low RPM, and once boost has arrived in full, it seems even quicker than its 616-horsepower rating would indicate. But it's also incredibly easy to modulate that power, thanks to a linear (or nearly so) throttle map, and, of course, its brilliantly engineered structure.

In fact, McLaren's drop-top is an immensely easy car to balance, whether on throttle exiting a corner (or maintaining speed through it), or on the brakes at entry, trailing brake pressure and approaching the zero-steer ideal. The lightning-quick, but never violent or dynamically upsetting shifts from the dual-clutch transmission and the light-but-informative (if not quite telepathic) steering enhance this innate sense of balance and controllability.

Much of the credit for this may be due to the electronic aids, which even in track mode, remain engaged to some degree (though they can be defeated). However, driven well, those aids do not interfere with even relatively aggressive maneuvers requiring intentional amounts of yaw and slip angle. This is not the case with many performance-car electronic stability and traction control systems, even in their most relaxed settings.

But surely more of the credit for the McLaren Spider's balance and responsiveness to driver input, and hence its ultimate controllability, result from the engineering and construction of the chassis and suspension itself.

Designed as a "clean-sheet" project, the MP4-12C, and the Spider based upon it, are, under the sheet metal, shockingly simple. It's a testament to the engineers' ability that such a highly capable, high-functioning, modern supercar can be accurately described so.

There is, essentially, nothing on the MP4-12C that isn't there for a reason, and a very good, performance-related one at that, aside from the necessary creature comfort items expected of any road car. A carbon monocoque tub bolts to aluminum subframes, the rear cradling the engine and transaxle so low it's almost mesmerizing. It's plain that the car was designed from the outset to be approach the ideal Form of a car as nearly as possible.

So, despite reports of the MP4-12C's "synthetic" or "video game-like" behavior--criticisms also often leveled at the Nissan GT-R, itself a fine track-day companion--I found the Spider to be not at all remote or interferent in its manners, but the opposite.

While my time with the car was limited to four short hours at the Monticello Motor Club in New York, I also noticed something surprising about the Spider: it's actually very comfortable to just drive around town--or in my case, around the support roads leading to various areas of the track.

This is due to one very clear and simple (in principle, if not in construction) set of components: the hydraulic dampers and virtual anti-roll bars.

Unlike most sports cars and even supercars, the McLaren 12C Spider has no torsion-rod arms linking opposite sides of the suspension together to aid in lateral roll stiffness (though there is a rear Z-bar for heave control). Instead, a hydraulic system dynamically adjusts damper and virtual spring rates per corner and laterally, controlling body roll efficiently, and without the harshness-adding effects such bars can produce. On top of that, the hydraulic suspension system allows the car to use much longer and softer coil springs than it would otherwise require, because those springs are essentially there only as a fail-safe for the hydraulic system; according to one McLaren engineer, they're about 25 percent as stiff as they'd be in a purely conventional setup.

You may wonder to yourself: why a convertible on track? Because, in this case, there's no apparent compromise to get the added benefit of available top-down cruising. In fact, with the hard top up, the only shortfall is in headroom; the car even looks like a coupe. On track, if it's even fractionally less rigid than the coupe, it's beyond the powers of mere mortals to perceive, even on the standard and sticky Pirelli P Zero tires.

The result of this minimalist but highly technical design? Incredible compliance over bumps and road irregularities, yet unyielding firmness and incredibly flat cornering, without either end of the spectrum seeming to be a compromise.

For the driver that can approach their own limits safely, the MP4-12C Spider is an almost limitless tool, and one that can bring similarly unlimited joy in crafting and refining the line around any given track. And for that reason, as well as its suitably attractive shape, comfortable cockpit, and tremendous sound, it's our new favorite supercar. Yes, there are more dramatic alternatives, and possibly even some that are faster around a given circuit. But as a complete package, the MP4-12C Spider combines true roadworthiness with true track suitability in a way few, if any, other cars can manage.