In 1963, the Ford Motor Company came very close to acquiring Ferrari, which was (discreetly) up for sale. Ford spent a significant amount of time and money conducting due diligence, and the deal was close to signing when Ferrari suddenly broke off negotiations.

Under the terms demanded by Ford, Ferrari would have essentially lost control of its open-wheel racing efforts, and would have been banned from competing against Ford at the then-prestigious Indianapolis 500. Henry Ford II was furious with Enzo Ferrari, and directed his racing division to build a car that could beat Ferrari’s endurance racers.

The end result was the Ford GT40, which made its competition debut at the 1964 Nürburgring 1000 kilometer race. Though the car ran as high as second place, it retired early with a suspension-related failure, and the 1964 24 Hours of Le Mans produced similarly disappointing results.

Carroll Shelby was tasked with leading Ford’s GT40 efforts in late 1964, and tasted victory for the first time at the Daytona 2000 in early 1965. By 1966, the cars were finally competitive, giving Bruce McLaren and Chris Amon the car’s first victory at Le Mans.

This was followed by three more Le Mans victories, each with a different team of drivers, in 1967, 1968 and 1969. Henry Ford II had realized his ambition of beating Ferrari at its own game, on its home field.

In the years since, the Ford GT40 has become an iconic sports car, spawning both a series of replicas and a modernized street version called the Ford GT built by Ford in 2005 and 2006. It’s fitting, then, that the 2013 Goodwood Revival would honor the 50th anniversary of the Ford GT40 with a single-marque race. 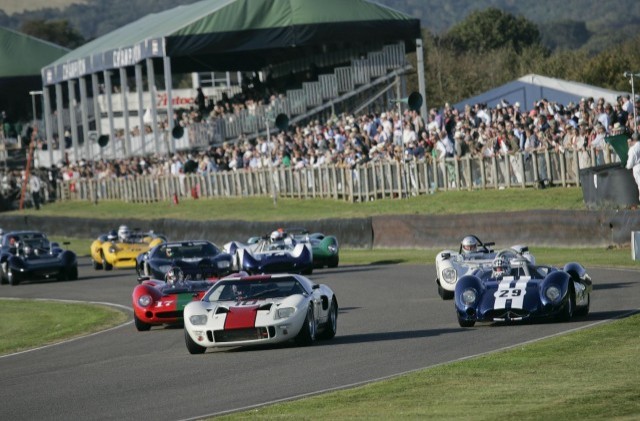 The Ford GT40 on track

Promising the world’s finest collection of authentic and historically significant Ford GT40s, the Goodwood Revival will stage the first-ever GT40-only race, with the winner awarded the Whitsun Trophy. The GT40s were stunningly fast for their day, and we can’t imagine that time has changed that; in other words, this is a vintage race not to be missed.