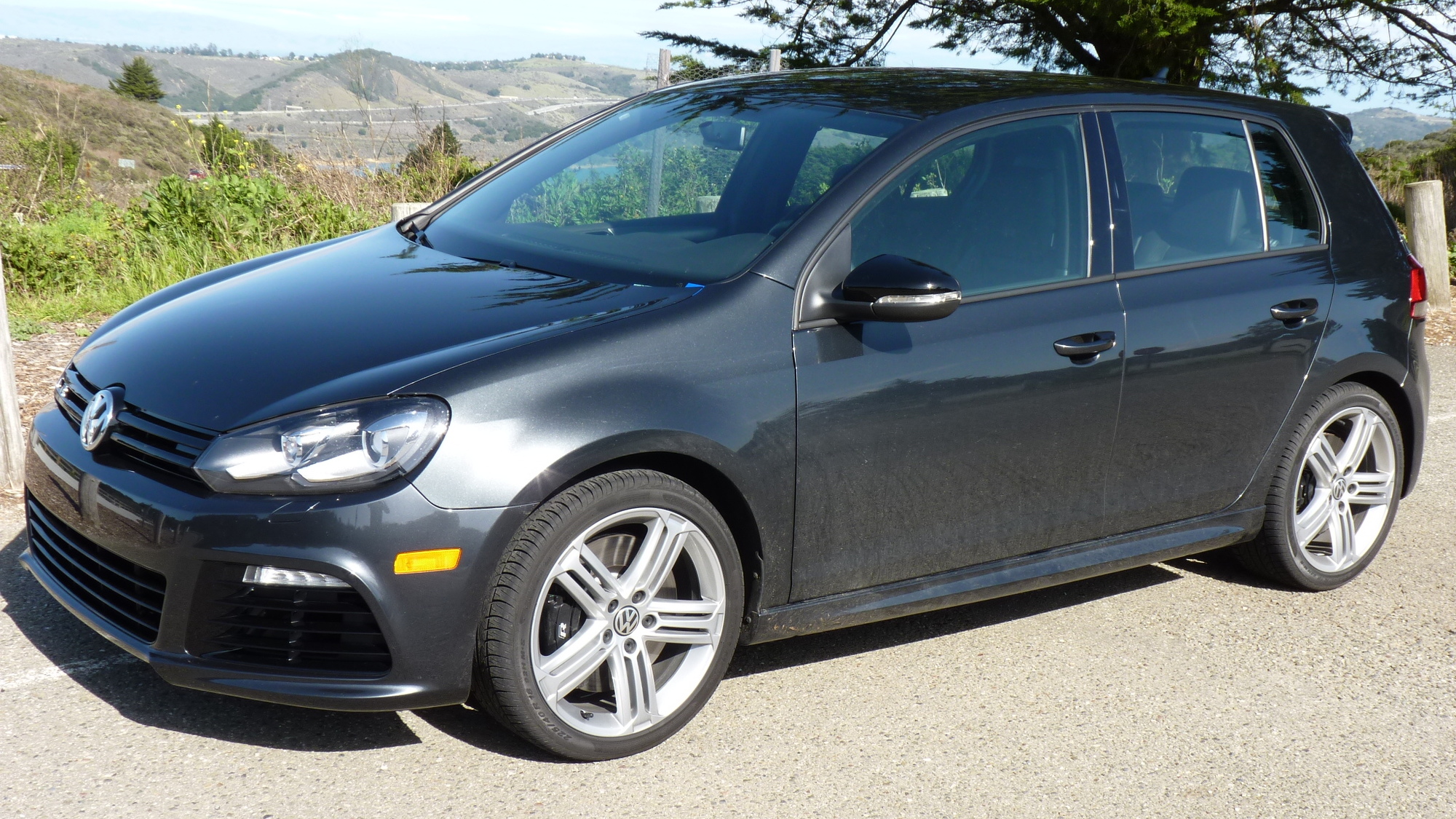 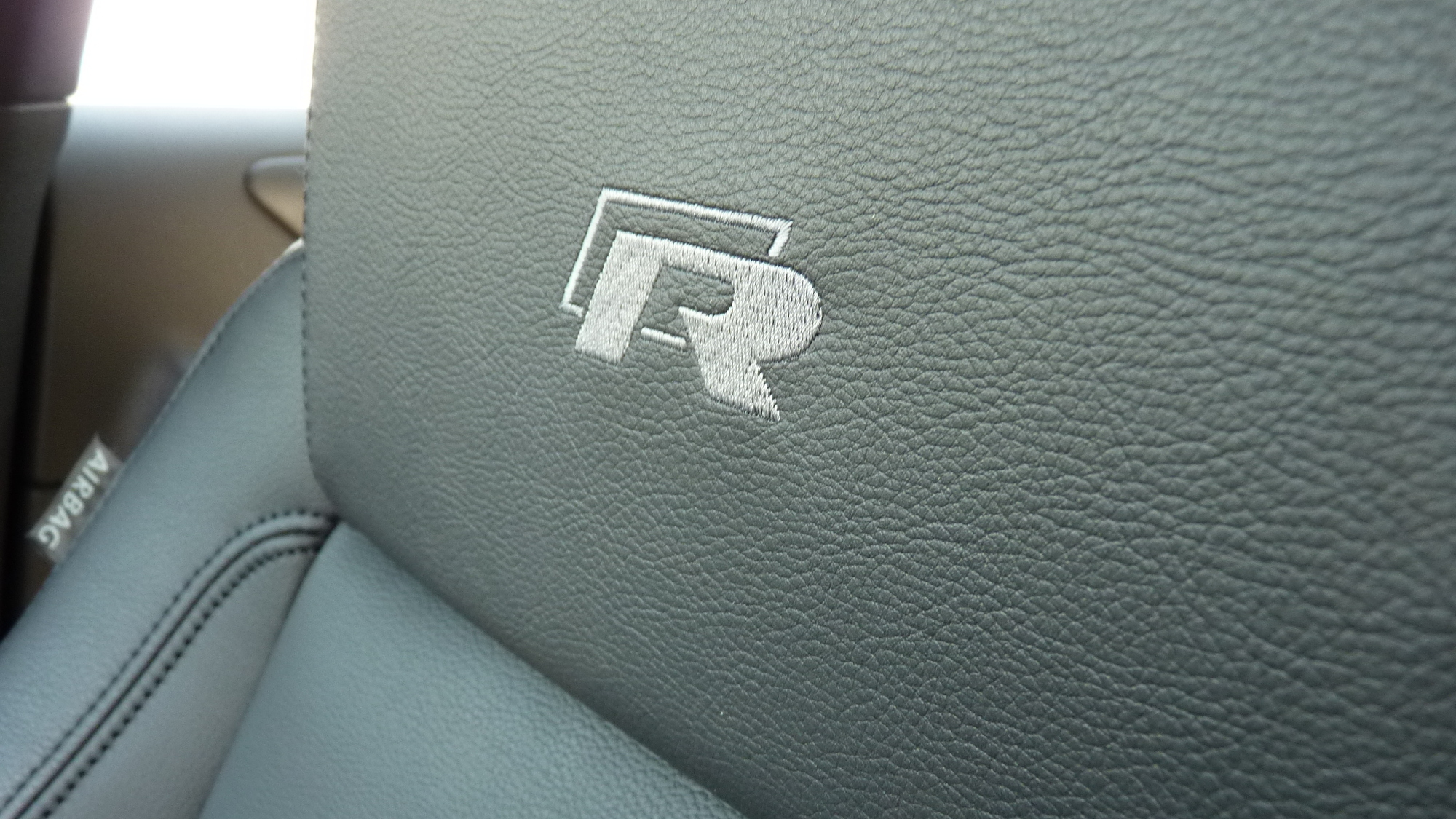 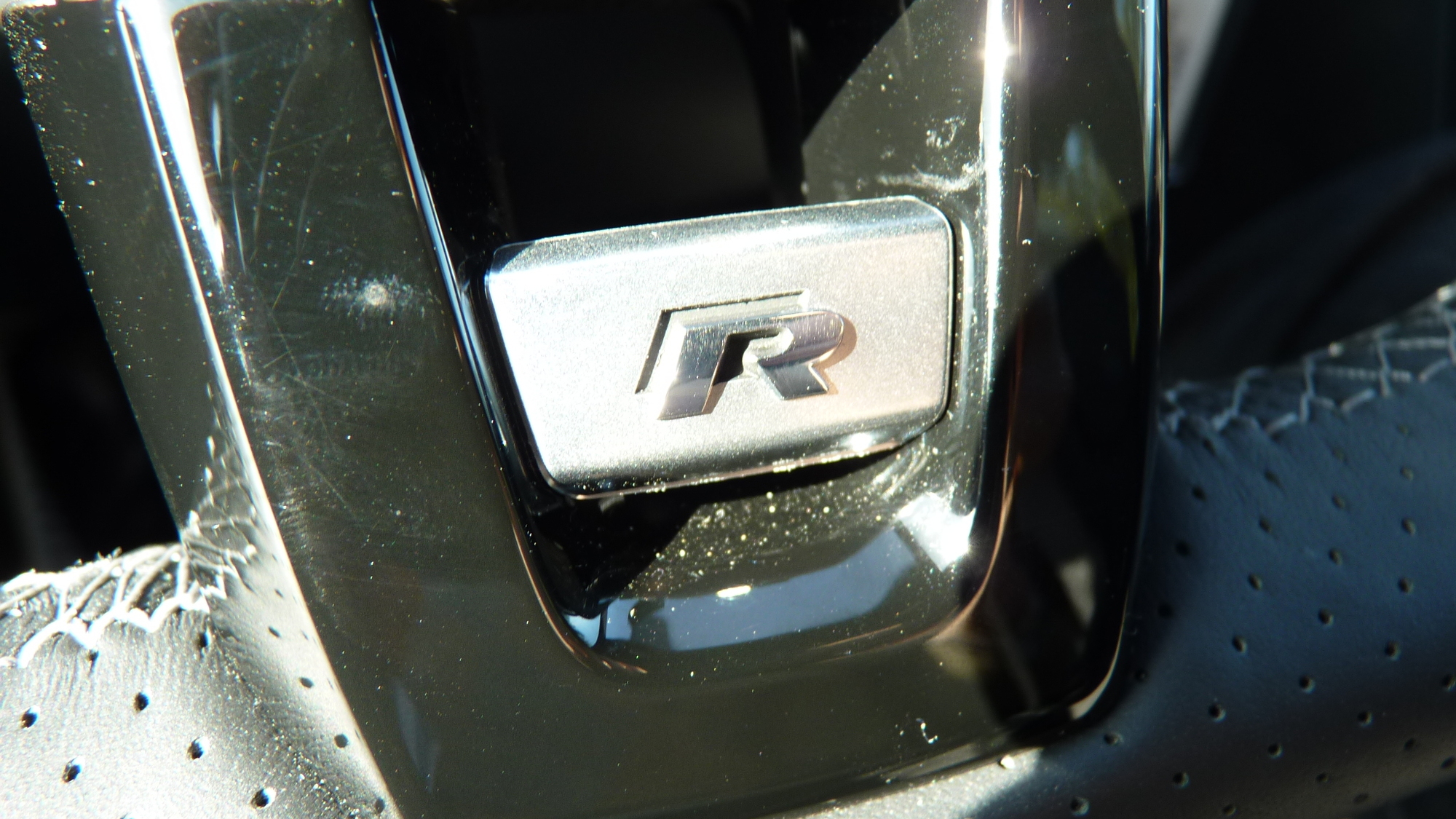 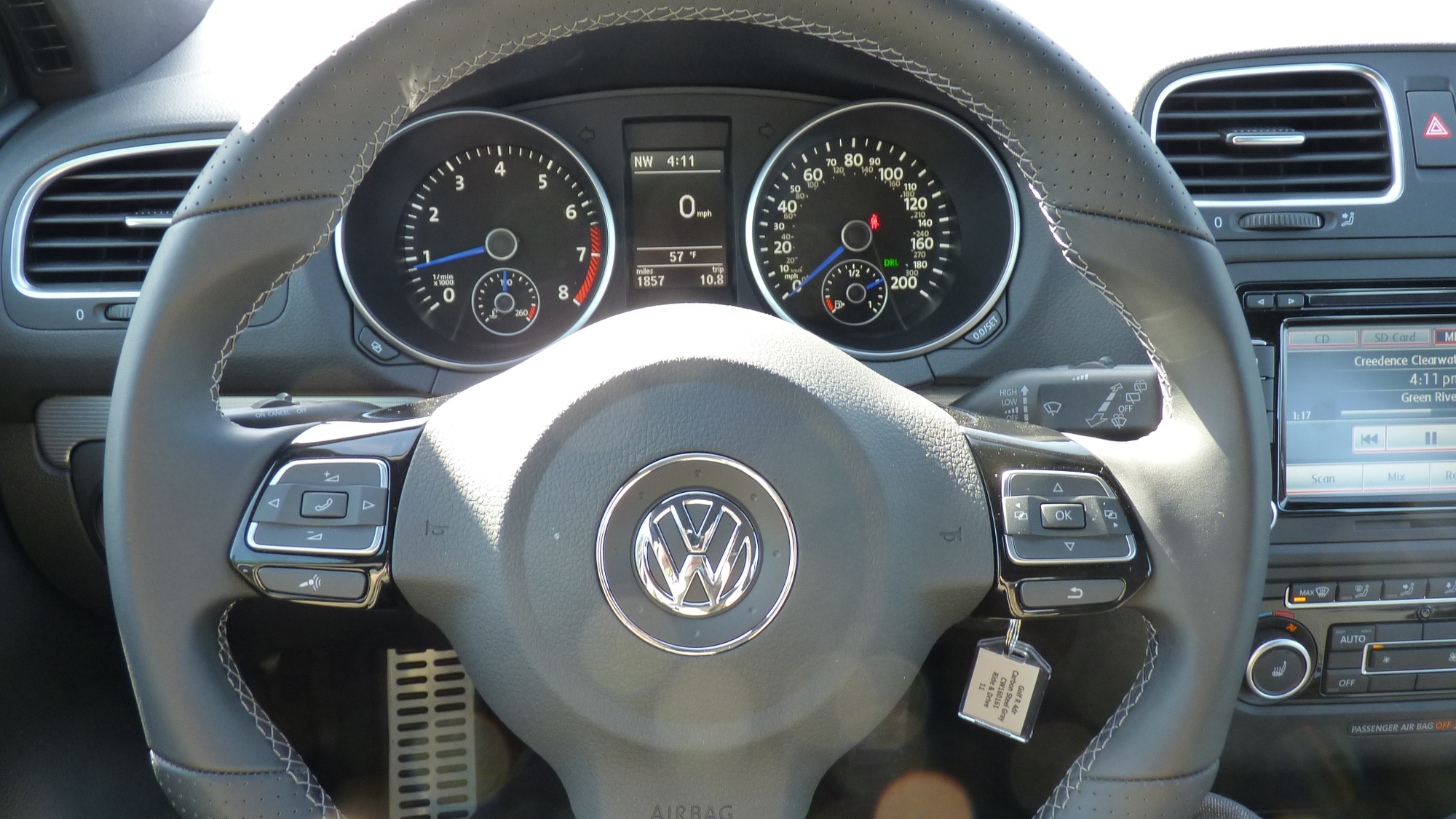 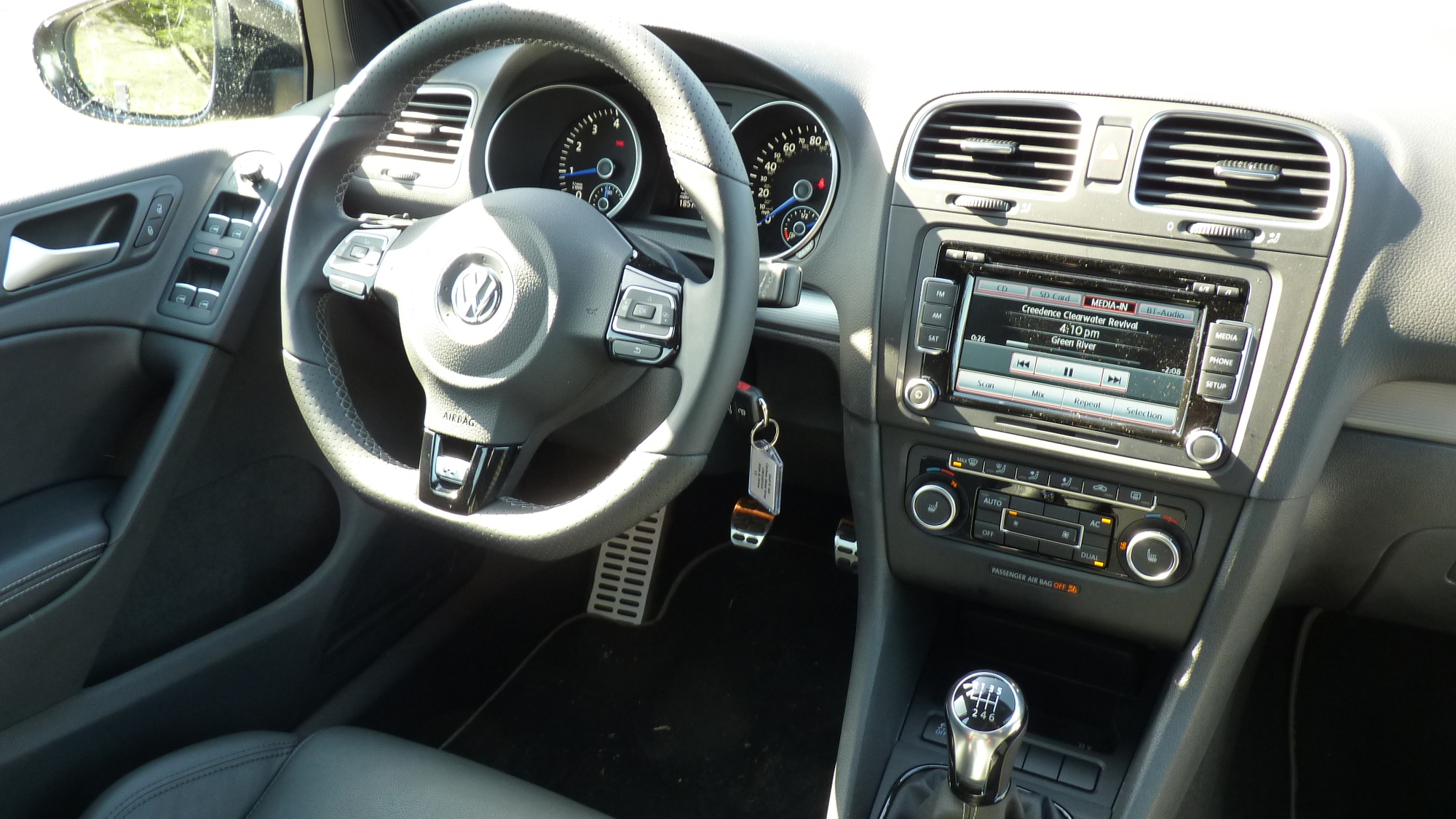 30
photos
First off, we have to tell you that the new 2012 Volkswagen Golf R is worlds better than the last Golf 'R' to be sold in the U.S. That's the 2008 R32, which was comfortable and faster than the GTI, but not much faster, and all too heavy and luxury-laden—more like a grand-touring hot-hatch.

The latest 2012 Golf R, which we recently drove, rather briefly, on California's Bay Area highways and up to Half Moon Bay, gets back to VW's roots, and its performance potential with small cars, and while it by no means runs like a tweaked-out tuner car, it does find more of the spirit of the original 1980s GTI models while reaping the potential of all-wheel drive.

The building blocks are familiar. Under the hood of the Golf R is essentially the same 2.0-liter direct-injected four-cylinder engine that's fitted widely throughout VW's U.S. product line, although here—and mainly through higher turbocharger boost—it makes 256 horsepower and 243 pound-feet (up from 200 hp and 207 lb-ft).

More boost and all-wheel drive, but no DSG

To accommodate that boost to 17 psi, there are actually a host of reinforcements for durability, and mainly due to the engine's output (although it's likely also a badge of honor for enthusiasts) there's no automatic transmission, or even DSG here—just a six-speed manual gearbox.

Volkswagen's 4Motion all-wheel-drive system is included in all Golf R models and is essentially the same as what's used in other VWs—with a Haldex clutch pack that fine-tunes the amount of power that's sent to the rear wheels. If needed, almost 100 percent of engine power can be sent to the rear wheels, but in 'normal' driving, the R functions much as a front-driver.

This strategy is for the better when it comes to maximizing fuel economy—the R is rated 19 mpg city, 27 highway—but from previous experience with this system out on the track, it makes the car somewhat more entertaining and tenacious on switchbacks yet still feeling mostly like a strongly understeer-prone front-driver when you really push the limits. The important thing to remember about it is that, thankfully, this system no longer needs the front wheels to slip before it sends more kick to the butt.

The suspension is the same as what's used in the GTI—strut-type in front and multi-link in back—but it's been tuned a bit firmer and rides slightly lower; and there's quicker-ratio steering gear. Brakes have been beefed up significantly, too, with larger 13.6-inch front and 12.2-inch rear discs—up from 12.3-inch and 10.7-inch, respectively, in the GTI. All-season performance tires (225/40), on 18-inch alloy wheels, are also included.

The Golf R does look a bit different, with special aluminum kickplates and a flat-bottom leather-trimmed steering wheel, plus special 'R' logo deep-bolstered leather sport seats, aluminum pedals, and additional touches like blue gauge pointers. From the outside, xenon headlamps and LED daytime running lamps (with adaptive front lighting) are standard, and the Golf R is probably best singled out by the 'R' logo on the grille and the centrally located dual exhaust outlets in back.

Other standard equipment on the $34,760 Golf R (two-door) includes dual-zone climate control, Bluetooth, iPod compatibility, and a Premium VIII audio system with eight speakers. Step up to the sunroof and navigation package ($36,860 for the four-door) and you get a sunroof, touch-screen nav system, keyless entry, push-button start, and 300-watt Dynaudio system.

A well-rounded performance car, or not edgy enough?

So how's it drive? Simply put, there are two sides to the Golf R's personality that run deep. On one side, with the quite sophisticated 4Motion system, sticky rubber, deft suspension tuning, and meaty torque curve, the R displays a lack of fluster, and it feels surprisingly stoic. On the other hand, the throaty exhaust note, somewhat sharper and quicker (but not quite nervous) steering, and somewhat harsher ride altogether gives an edgy, tweaky side that's unusual in German cars. Altogether, this bi-polar nature served to remind my co-driver and me of the Audi TT RS at times—which is not at all a bad thing.

There are a couple of pronounced down sides to this whole transformation, and one of them is weight. At about 3,450 pounds, the Golf R weighs about 400 pounds more than a base VW GTI. While the R still gets the favorable power-to-weight ratio, the other down side comes into play: the powerband is a bit narrower, peak torque is reached at 2,400 rpm instead of 1,800 rpm, and there's a noticeably more turbo lag. And actually, we couldn't help but think that VW's DSG would be a better pick here for keeping the turbo on boost. So in all, the R doesn't feel that much quicker than a GTI—even if the R is faster in flat-out acceleration runs.

Which leads to one final price (and perhaps sanity) point: With pretty much an equivalent level of equipment, the 2012 Volkswagen GTI with the Autobahn Package totals $31,365. So the cost of the Golf R, and its 56 more hp, all-wheel drive, and numerous performance improvements, is only around $5,500. There—depending again on what you seek—it might be totally worth it. On the other hand, the base Golf R adds more than ten grand to the price ($24,675) of a base GTI.

A league above tuner cars

While the Golf R competes easily with the Subaru WRX and Mitsubishi Ralliart, it lacks the heavy-breathing edginess that characterizes the Mitsubishi Evo especially, and also the Subaru STI and even the front-wheel-drive MazdaSpeed3. But as far as interiors go, the Golf R feels an entire league above those lowly 'tuner' cars. Or, spend just a few grand more and you could have a base Audi TT.

In all, we can't help but think that the Golf R appeals more to a very special kind of Vee-Dub enthusiast, and less to the general go-fast crowd.

Perhaps that's for the best. And perhaps in admission of its price/appeal equation (and keeping in mind it's manual only), VW is only planning to move 5,000 of these over a two-model-year run (2012 and 2013), making it a relatively low-volume model.