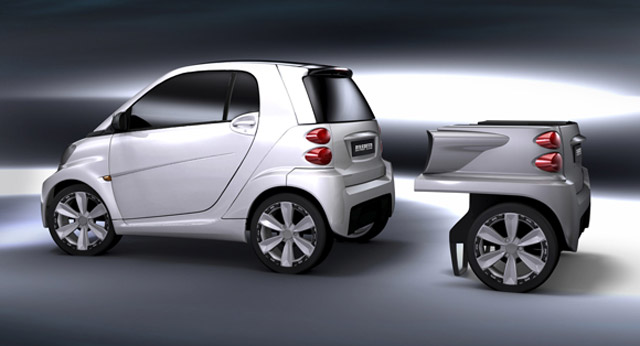 If you wanted a great deal more space in your car we're not sure why you'd buy a Smart.

That's not to say the little Smart isn't great at what it does - nipping around city streets and looking chic outside the local coffee house - but if you buy one expecting any more space than for two people and a bit of shopping you've probably not chosen wisely.

Smart itself has tackled this issue head-on with the Smart For-Us pickup concept due at the 2012 Detroit Auto Show, but if you don't fancy a pickup there's always Swiss maker Rinspeed.

At the 2012 Geneva Motor Show that follows Detroit, Rinspeed will be showing the Dock+Go mobility concept.

Based on Smart's two-seat, four-wheeled Fortwo, Dock+Go adds an extra pair of wheels and the space for a whole lot more cargo.

The maker describes it as a "backpack on wheels" and they actually have a point. The clever aspect is that, just like a backpack, you can leave it at home when you don't need it, meaning you get to keep all the regular Smart virtues such as compact dimensions and low weight.

Rinspeed envisions all sorts of uses - a pack that includes a heated box perfect for take-out food delivery services, or a toolbox pack for craftsmen.

Even more useful is an option for those driving the Smart Fortwo Electric Drive. With a typical range of between 60-80 miles, you're usually restricted to city use. 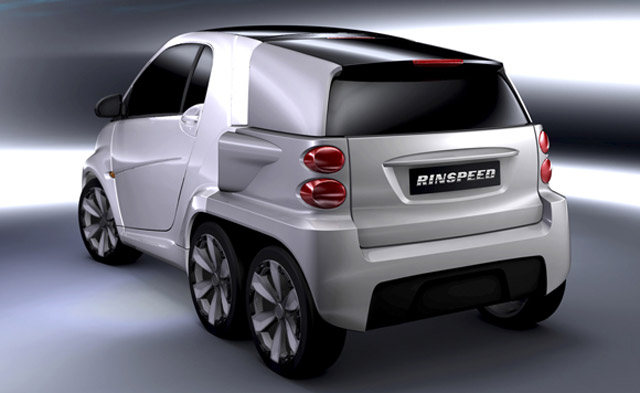 With the Dock+Go, an "energy pack" module with either a combustion engine or battery range extender would provide you with much greater range for those odd occasions when you might need to travel further. The electric module actually has driven wheels, so while it powers you along it recharges the car's batteries just as it would when you lift off the accelerator.

Then, when you return to the city, you can leave the Dock+Go at home again and make use of your tiny electric car.

Okay, so just like Rinspeed's Bamboo concept from the 2011 Geneva Motor Show and other crazy concoctions like the SQuba electric Lotus Elise-based submarine, all-wheel drive Porsche 911-based pickup Bedouin and all Rinspeed's other concepts, the Dock+Go is unlikely to ever make production.

Even so, the world would be a worse place without a bit of imagination and lateral thinking. And for a select few, it'd really make the Smart smarter.