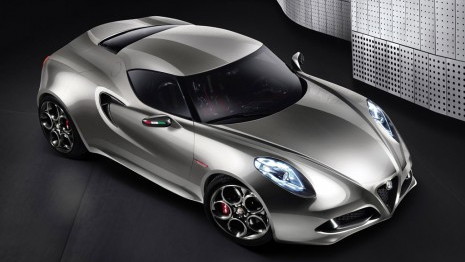 22
photos
The Alfa Romeo 4C Concept is brilliant--that's already been settled. Now, it's not just a concept, either; it will start production in 2013 according to Alfa CEO Harald Wester speaking at the Frankfurt Auto Show.

We've expected the 4C to lead Alfa's return to the U.S. for a long time now, but as yet, it hasn't been official. Now that it is, we're getting a bit excited for the small, svelte, and sporty Alfa.

Packing something north of 200 horsepower in its 1.75-liter turbocharged four-cylinder while weighing in at a nearly unbelievable 1,875 pounds (that's more power and less weight than a Lotus Elise), all wrapped in a stunning little mid-engined package, the 4C is sure to win fans not just for its badge or its looks, but for its abilities.

Unfortunately, very few of those fans will be able to buy one: only about 20,000 are planned for construction over a five-year run, according to previous reports. Another 5,000-10,000 roadster versions, possibly badged as 4C Spyders and built by Abarth, will bring the total to somewhere around 30,000.

Pricing is expected to fall around $60,000, putting it in reach of many more buyers than there will be cars to buy, so expect to see many sell above MSRP, especially at introduction.

With construction set to begin in 2013 and Alfa Romeo's return to the U.S. delayed to that same year, we expect the car to arrive as a 2014 model. Assuming Alfa's plan stays on track this time.