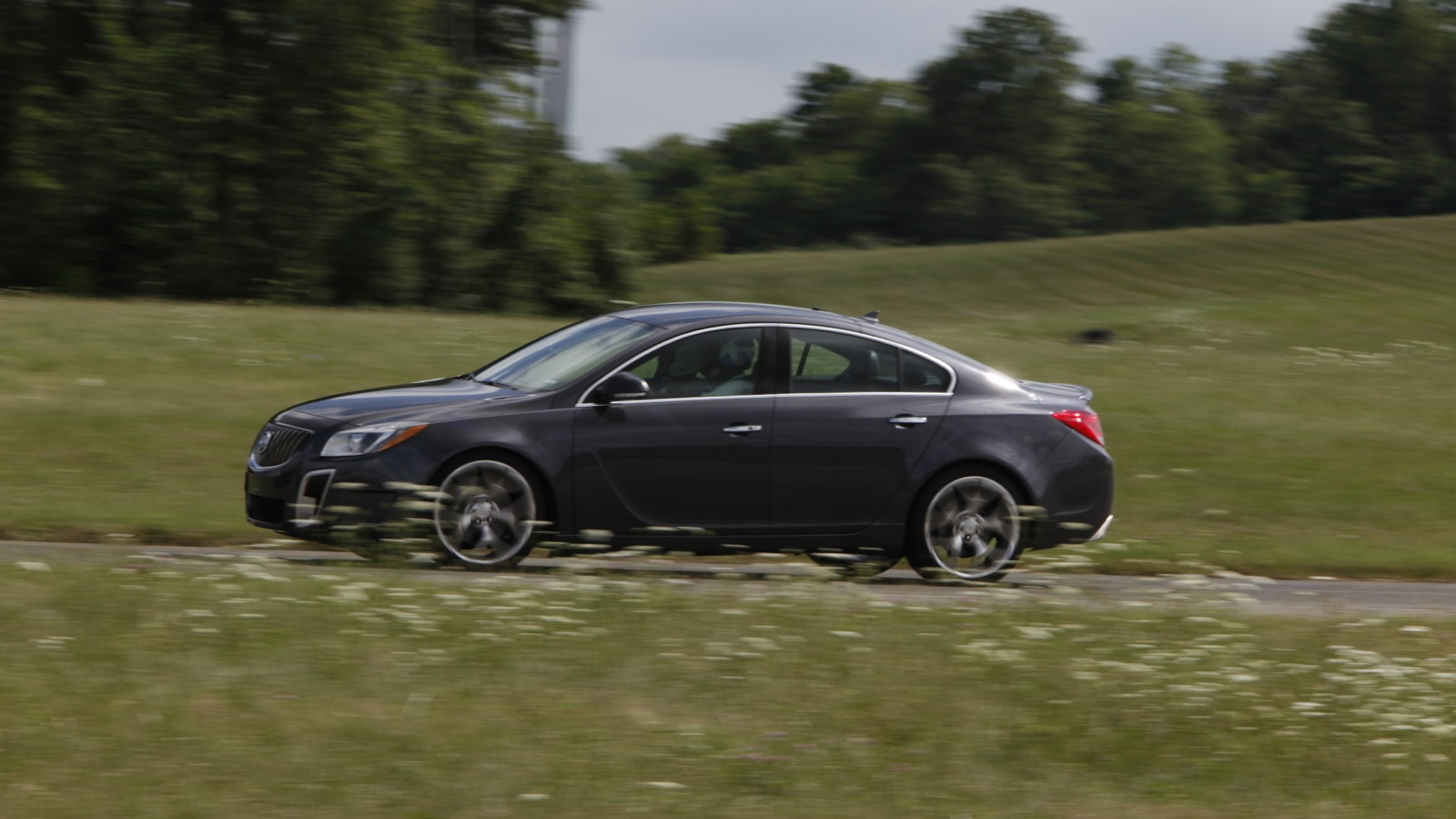 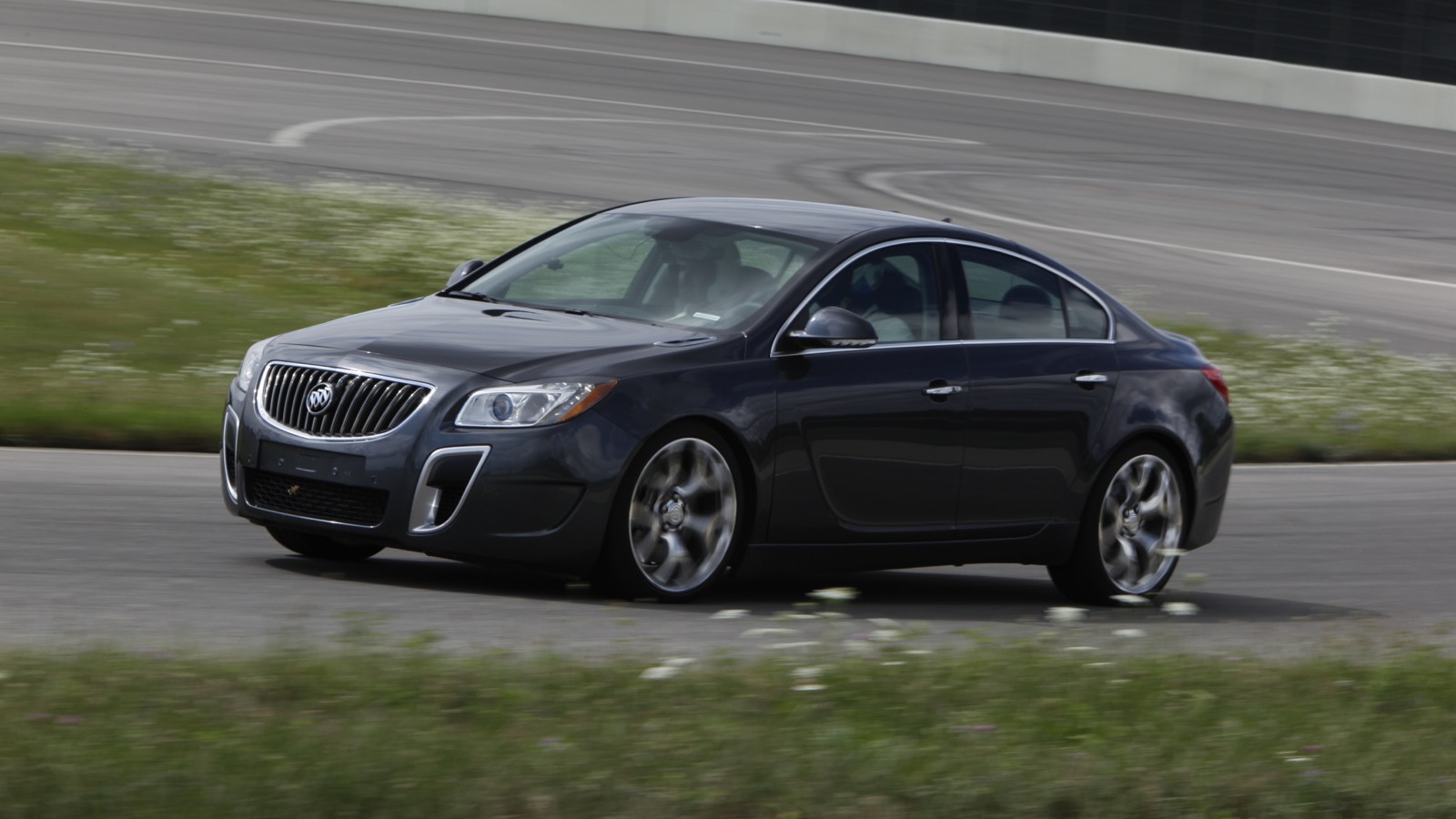 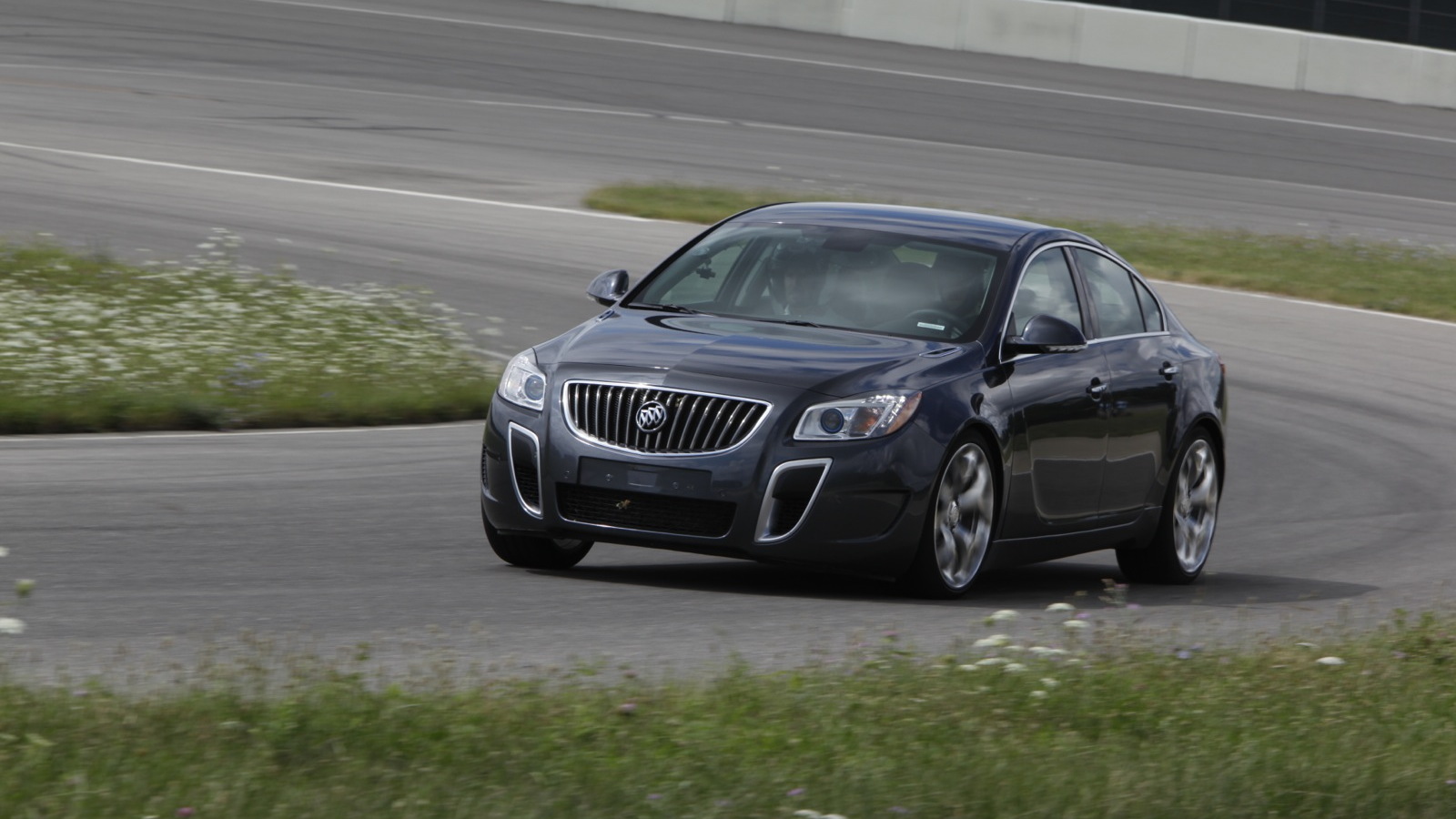 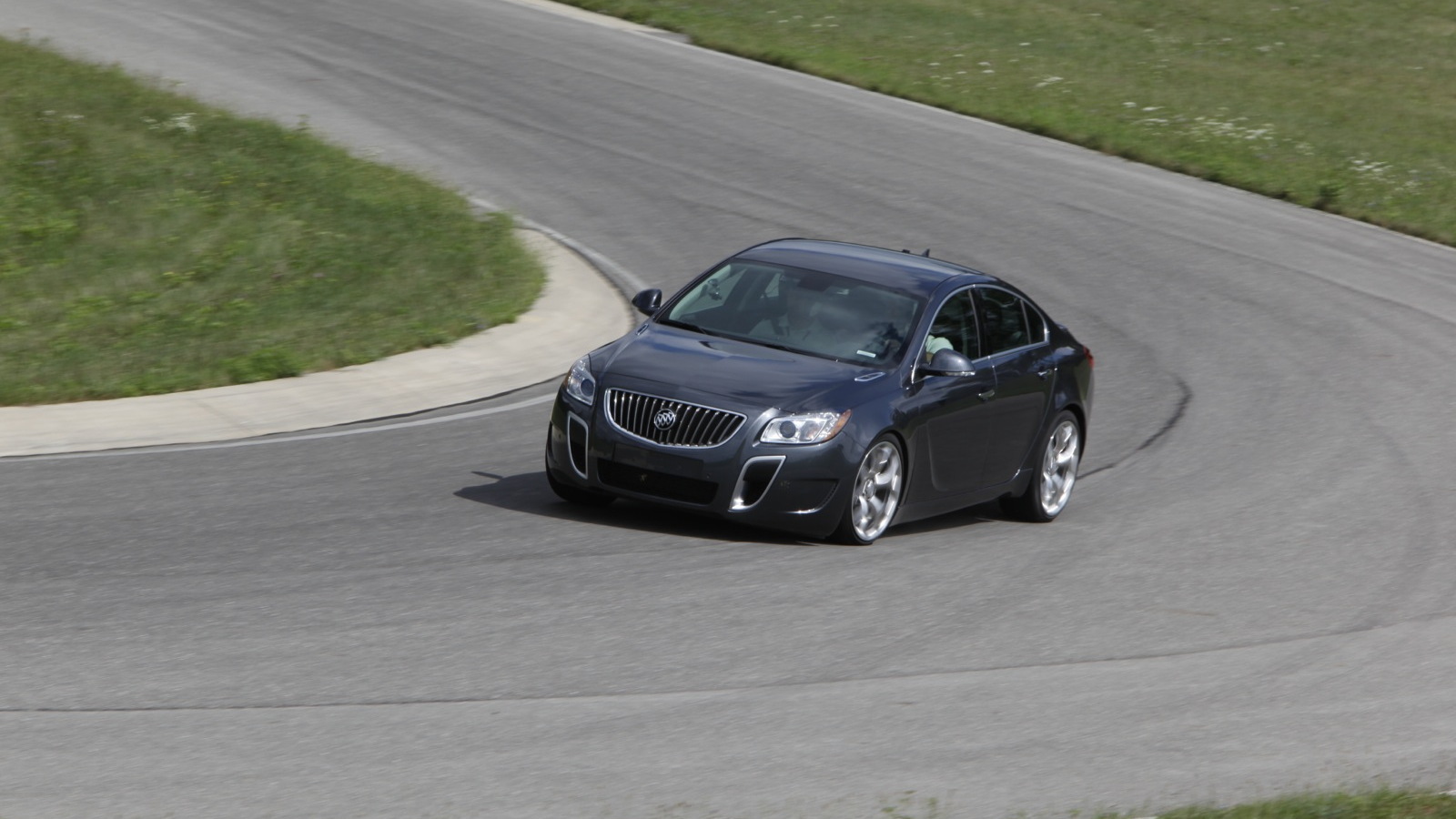 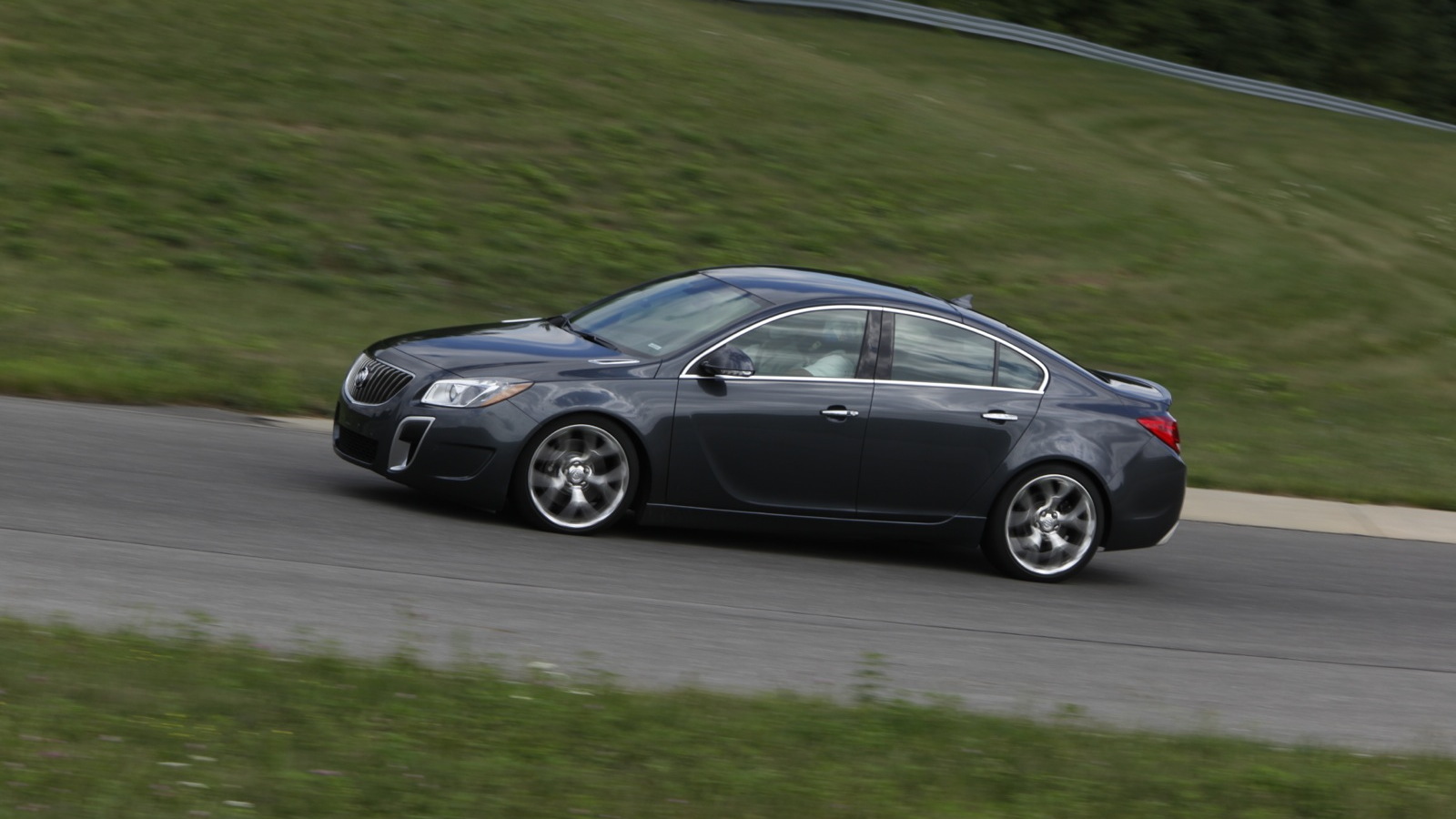 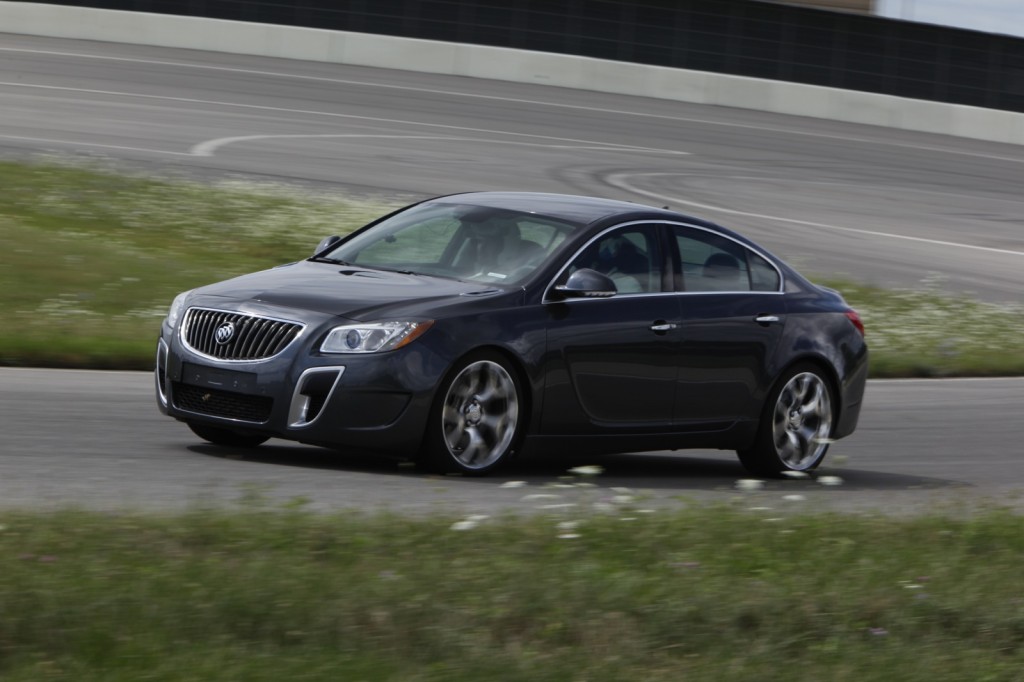 Buick has been transformed, and in automotive terms, it's a towering achievement. It took Toyota three generations to get its full-size trucks right. It took three decades for Mercedes to realize its cruise-control stalks were ergonomic gotchas.

Buick's taken just four years to get from the days of Terrazas and Rainiers to where it is today: a power trio that includes the tasty Regal, the luxe LaCrosse and the sumptuous Enclave. The average age of Buick buyers is now under 60, and sure to fall once the late Lucerne factors out. If Buick used to be the last car you bought--ever--it isn't anymore.

It's the Regal that convinces us most convincingly, that this iteration of Buick is going to matter. We're even more certain now that we've driven the 2012 Regal GS, a car that's made some of our High Gear Media staffers positively asthmatic with anticipation. We came to GM's Milford proving grounds for laps yesterday in the Regal GS, and we're glad to report we can breathe better now.

So can the Regal. In our sister site TheCarConnection's review of the 2011 Buick Regal,  we said "We’ve always wanted a sedan as sleek and comfortable as this—but if the Regal’s going to wear a Buick badge, it probably needs more room and more power." The back seat still feels a little snug, but more power is here via a stronger turbocharger, bundled with a finely honed suspension and a real shift-it-yourself gearbox. 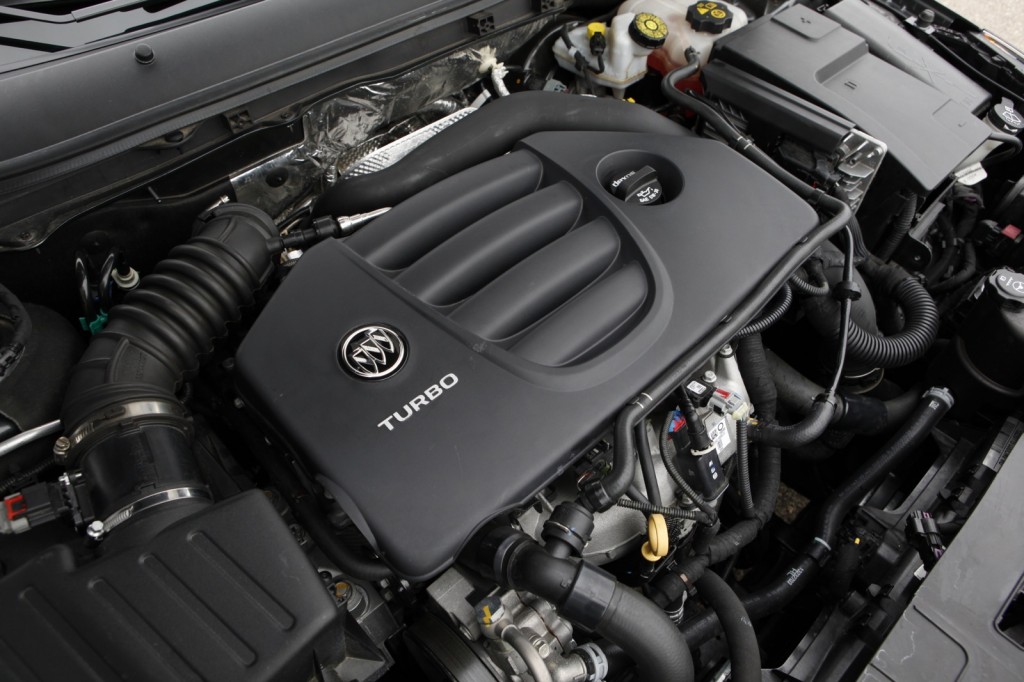 The Regal GS starts with the hard points of the Regal CXL turbo, now the mid-level model in the four-door's lineup. The CXL's 220-horsepower output deemed too pedestrian, the GS gets a higher-performance turbocharger tune that runs at 20 psi, versus the CXL's 15 psi. The Regal GS' powertrain is actually descended from the one in the old Cobalt SS and HHR SS, and it's a welcome boost, if not the venomous turbo V-6 piece you'd find in the Euro version of the Regal, the Opel Insignia OPC. It's also shy on output on paper, against cars like the Hyundai Sonata 2.0T at 274 horsepower.

Here, the turbo massage raises output to 270 horsepower and 295 pound-feet of torque, and the torque number plays a big role in the GS' happy urgency. It spins out 95 percent of its peak torque from 2300 to 4900 rpm, and the three low gears in the six-speed manual are staged tightly to keep the turbo on boil, and to keep the GS in that band, while the upper gears seek out fuel economy.

The formula works. Buick says the Regal GS manual will hit 60 mph in 6.7 seconds, about the times promised for a Hyundai Sonata turbo. And like it does in the CXL, the turbo gives the GS that particular feel--a muted whistle here, a whippet hit of power there--that maybe all cars will have soon as turbocharging keeps displacing big displacement. Rolling on and off the throttle shows how carefully the turbo's thrust has been tuned, and it's only in really tight second-gear turns at Milford where you can catch the engine off-boost.

The Regal GS could be the first time I've ever driven a manual-shift Buick, and the six-speed is a good one. The clutch footwell is a little tight, but the lever action and uptake would feel fine in any Acura. The lever has a unique reverse lockout trigger switch you'll be flipping and clicking between shifts. A six-speed automatic is coming, but won't be joined by paddle controls, a gimmick we kind of like.

A lot of energy has been consumed in making the front-drive Regal GS behave neutrally, and that work nudges the Regal's handling higher up the Euro-feel scale. Buick calls its new front suspension "Hi-Per Strut," and in practice it means a more stable, better-isolated set of front struts that contribute to flatter handling and mimic some of the benefits of a good control-arm suspension. It also squashes most of the torque steer that could rear up on full-throttle runs.

The ride's also been lowered 10 mm, springs are 20 percent stiffer, and the adaptive suspension and steering offered on other Regals is standard here. It's upgraded with new programming so that its base setting feels like the middle setting on other Regals, with additional Sport and GS modes that progressively clamp down on the shocks and firm up the car's steering feel. 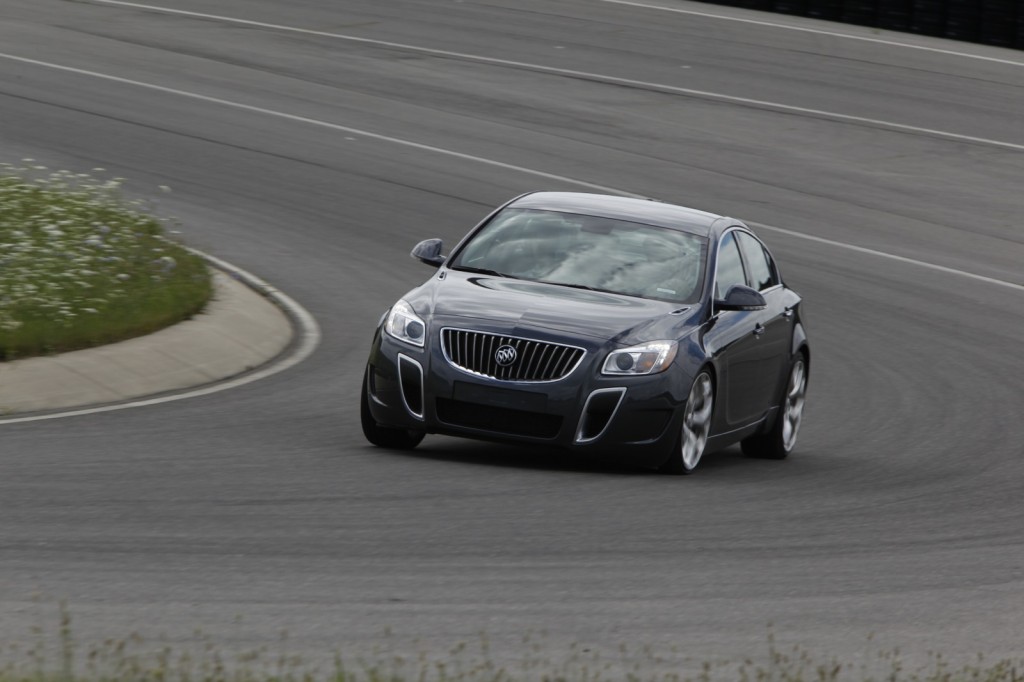 On the Milford track, we took a lap in each of the lower settings before dialing up GS. The progression is smartly done. In normal mode, the Regal rolls predictably into corners, while the Sport mode gives up most of that pliable pitching for something a lot closer to neutral than you'd expect from a front-driver.

In GS mode the Regal brims with a well-sorted feel that encourages deep dives into corners and lots of hard braking, and overcooking it into corners doesn't provoke anything more dramatic than the usual tire protest. No M3, no RS4, the Regal GS is still tighter and more controlled than Acura's TSX, with the Volvo S60 and its computer-controlled suspension clearly in its sights. We couldn't drive on public roads between laps to judge how the track feel stacked up against road comfort, though. The stability control can be turned off via a switch on the dash right next to the Sport button.

Buick's engineers point proudly to the brake package on the GS, Brembo rotors in front with ventilated discs, paired with the stock CXL pieces in back, and they feel like the breakout piece of the driving package. They're tucked behind 19-inch Goodyear RSA all-season tires or Pirelli 255-series 20-inchers on our test car, which Buick says can grip to about 0.9g before breaking free for good.

On other fronts, the Regal plays it safe by leaving its gorgeous body mostly untouched. The changes are light but on point: the front air intakes are now metallic-shrouded blades (with front parking sensors, which you can't get on other Regals), the chin spoiler's flared more, the exhaust tips are squared off and faired into the rear end tightly. Inside, the basic-black interior gets lovely white stitching that runs across the seat in a way Volkswagen would be proud of. The GS' unique sport seats look fantastic and aren't overly firm--the bolsters squish and give a fair amount under pressure, which should pay off for the more usual highway stints behind the wheel. 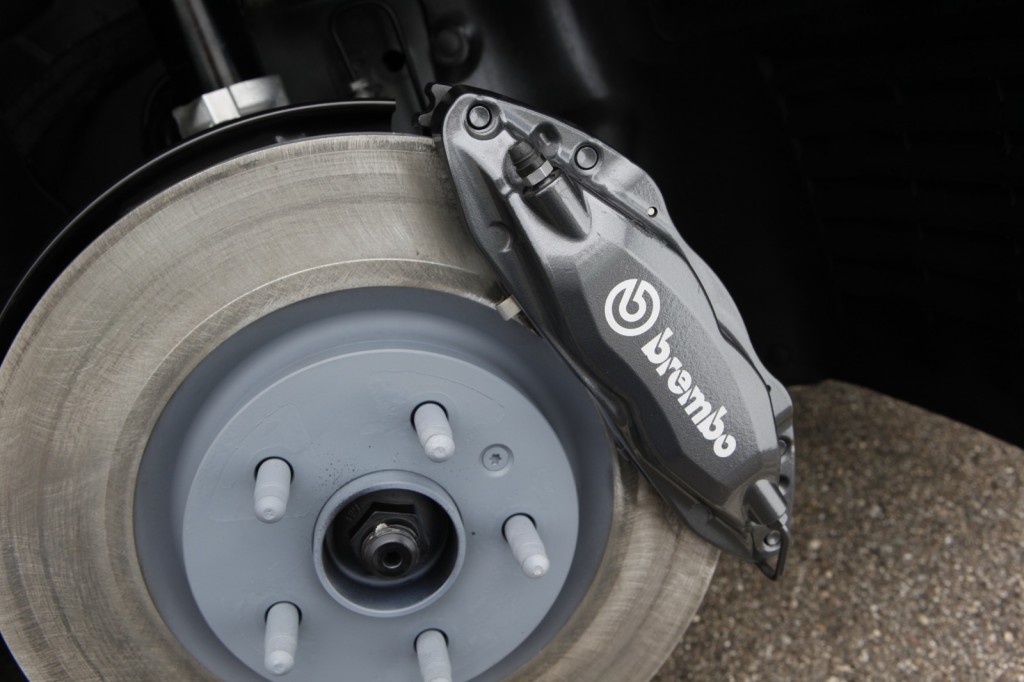 The GS' base price of $35,310 includes some tweaks unavailable in other Regals. There's a chunky flat-bottomed sport steering wheel with audio controls, leather upholstery, a Harman Kardon stereo system, and front and rear parking sensors. As it is on other 2012 Regals, the GS' navigation system is now of the touchscreen variety; the controller knob on the console still will help you pick out destinations as it did in years before, tediously, but now you can tap the screen for quicker information access.

Coming later this year is a new Buick IntelliLink connectivity system. Like other similar apps, IntelliLink hooks up smartphones to the car via USB or Bluetooth and enables on-screen, voice, or steering-wheel control. Pandora and Stitcher streaming also are enabled.

Options on the Regal GS are limited to a sunroof, metallic paint, the navigation system, and the Pirelli summer tires. Opt for them all, and the Regal GS sits just under the $40,000 mark.

At that price point, the  Regal GS has some marketing work ahead of it--mostly, pointing out to the world that it's here, since it's a blue-sky car with few natural competitors. Rear-drivers like the Infiniti G37 and BMW 3-Series are more pricey, and even a manual-turbo form Audi A4 can nick $50,000. Picking a fight with an Acura TSX or a turbo Volvo S60 makes better sense, but in truth, the car that comes to mind as the Regal's natural prey is its distant mechanical relative, the 9-3 Turbo--a car that could already be dead if the Saab zombie ever shambles to a complete stop.


The Regal GS comes up shy of the power and traction an RS4 or even a T5 S60 can dole out, but on the Marco Polo heat map, it's getting a lot warmer. Fanbois want all the needles pegged, all the avenues exhausted, but the Regal GS splits the sport-sedan distinction right at the hyphen--exactly where Buick should be.

That's what we call progress. In the place of Roadmasters, now we have Regals. And now we have one that's faster, lower, smaller, and nimbler than anyone would have bet just four years ago.