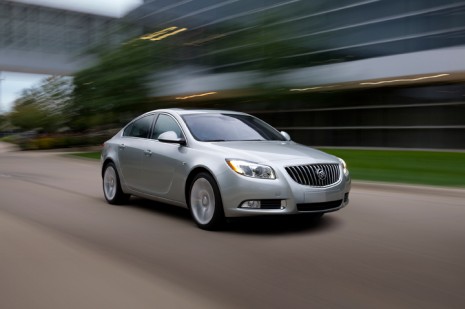 Quick, what's the second-best selling luxury nameplate in the U.S.? BMW? BZZZT, they're in first place these days. How about Mercedes-Benz? Nope. Cadillac maybe? Closer, but no cigar.

No, according to our friends over at Kicking Tires, Buick has outsold every other luxury brand in the U.S. in the first two months of the year except BMW, which has managed to keep an 800-unit lead.

The numbers tell an interesting tale. KT notes that while it'd be easy to just blame a recall hangover, the reality is that Toyota's sales were strong in February, up by 48 percent. However, Lexus sales rose by a paltry 0.2 percent, which Lexus says is because of poor supply. By contrast, Buick skyrocketed 73 percent last month, and so far this year it has outsold Lexus by nearly 2,500 vehicles. It has done this with only four models, compared to the nine that Lexus offers (one of which is the LF-A).

An interesting takeaway from the article is that while Buick is certainly strong, Lexus is showing signs of weakness. The luxury juggernaut's sales were off significantly last year, and while it retained its crown of the best selling luxury brand in the U.S., Mercedes-Benz and BMW closed in significantly.

This year, things are different. BMW is in the lead, and Buick has surpassed the Japanese luxury maker. Kicking Tires notes that compared to other luxury brands, Lexus hasn't introduced much lately. While many vehicles have been refreshed, the current-generation LS, GS, IS and ES have all been on sale for about half a decade, making them older than many of their competitors. Lexus' most recent new model, the HS 250h, has failed to ignite the sales charts. The RX remains a strong seller, a bright spot in a field that gives all indications of sagging.

The biggest question is whether Buick can keep it up. Lexus had a dramatically smaller inventory over the first two months of the year, 15 days supply versus more than 70 days for Buick. That means less selection for Lexus shoppers, and therefore fewer customers. As the company ramps up production, sales will likely increase. Will they surpass Buick? It's a good question, but one thing is for certain: Lexus isn't going to relinquish its annual sales crown without a fight.